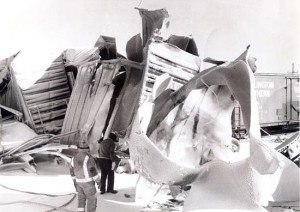 I live in Montana where it is often bitterly cold in the winter. In February of 1989, it was 29 below zero, and a long train was crossing the state and heading up the Continental Divide just west of town. When the over-worked heater went out in the engine, the engineers stopped the train in order to swap engines so they could have heat. They set the brakes, disconnected the train, swapped the engines, and then went to re-connect the train, only to find it……missing. As it turns out, brake fluid congeals at about 20 below zero, becoming useless. Montana Rail Link didn’t know that at the time, and neither did the two hapless engineers. So, 44 fully loaded rail cars rolled backwards out of control nine miles from the top of the continental divide, colliding with a side-tracked train right in the center of town.

It was 5:00a.m. and 29 below zero when all of Helena got rocked out of their beds by a cataclysmic explosion, catastrophic conflagration, and toxic cloud of fumes rolling across town. Every window was shattered for a mile in all directions. Thousand-pound pieces of train rained down upon the adjacent college and nearby business district. The power was out. The phones were dead. The police were unable to communicate with the firemen; the firemen couldn’t communicate with the railroad; and nobody was communicating with the citizens. It was a mess. A horrifying mess.

Living two miles from the wreck, my front door was blown open and I was rudely awakened to a house that had no light, no heat, and no phone. Seeing the glow rising from downtown, I knew something was very, very bad. I needed light, but all I could find was a couple of decorative candles. I knew I had a flashlight, but it was packed in the camping gear, and I needed a flashlight in order to find it. I tried to find a radio but all my radios required electricity. Without electricity, the engine heater that kept the oil in my car from congealing and the battery from freezing was not functioning, so I went outside to start the car in order to keep it running in case I had to leave. I turned on the car radio and tried to tune into the Emergency Broadcast System but found nothing but static. All Helena radio stations were off the air. All my life I had grown up listening to the Emergency Broadcast System doing radio checks: “This is a test. This is only a test. If this had been an REAL emergency….” Now, it was a REAL emergency, and the Emergency Broadcast System, which was supposed to tell me what was happening and what to do, was no where to be found. As it turned out, the Emergency Broadcast System runs on electricity with a battery back-up, and the battery had gone dead within minutes at 29 below zero.

So, I did the only thing I could: I paced the kitchen floor, and waited for someone to tell me what to do.

It was only by great good fortune that no one was killed or injured that day, though the heart of my city was utterly shattered. By mid-morning, one radio station was on the air providing a steady stream of information and directions. The Red Cross was asking people with running cars to help with evacuation since there were so many citizens, particularly college students and elderly, who had no heat at home and dead batteries in their cars. So that’s what I spent my day doing: shuttling bewildered, shivering, weeping people around town, while gawking at the damage done to the homes and businesses of my friends and neighbors.

This event had a profound effect on me. It was the first time I ever had to confront the fact that catastrophic things happen in the blink of an eye. It was the first time I ever realized how absurdly unprepared I was to face such an event. And most importantly, this was when my faith in “the authorities” to handle such a situation shattered. This was the beginning of my preparedness habit, because I never again wanted to be caught in a situation where I did not have the things I needed on hand. I was never again willing to believe that some mysterious “Someone Else” was going to handle the problem, absolving me from the responsibility of taking care of myself. From that point forward, I simply assumed that I would be far better off in any emergency if I were prepared in advance to take care of my own needs.

I’ve been a prepper ever since.
Visit Janet Spencer’s blog, Calamity Janet.