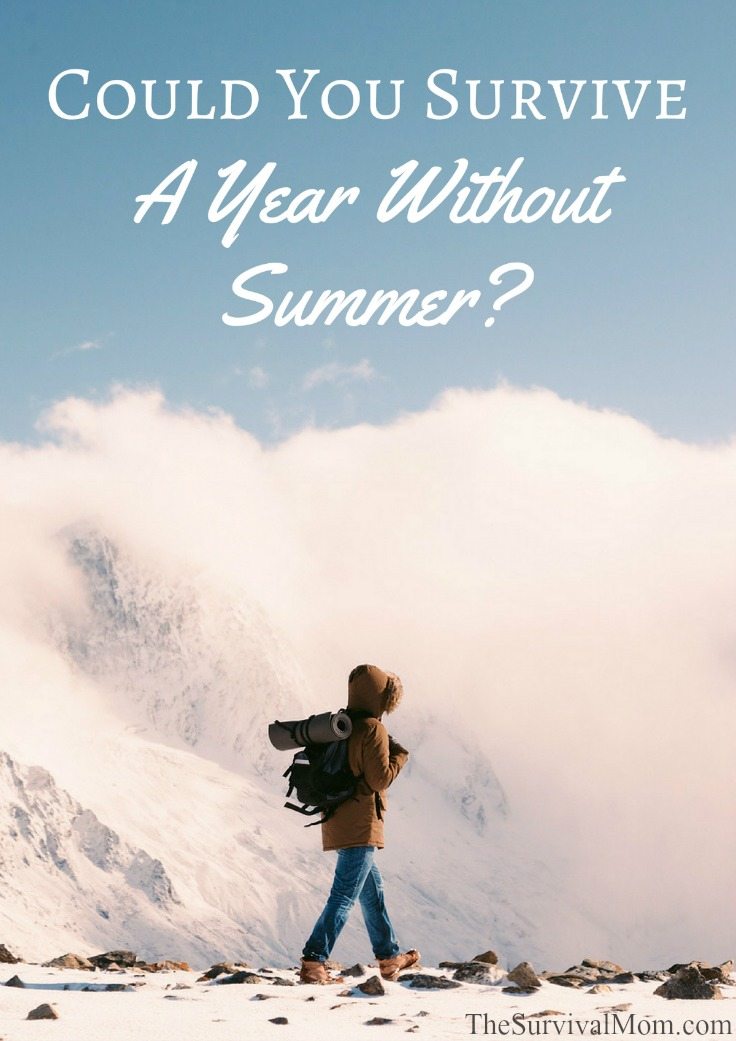 Most of us dread the dog days of summer. We look for relief at the summer pool with a glass of cold lemonade. Back in 1816, the summer was different for those living in Northeastern America and Northern Europe. They did not have the warm summer weather they were accustomed to, and the results were devastating for people around the world.

What happened that year? What we can learn from it and how we can prepare for these kind of events? Could you survive a year without a summer?

Located on the island Sumbawa in Indonesia is Mount Tambora. It has been, and currently is, an active volcano. On April 10, 1815, Mount Tambora erupted leaving 12 feet of ash over a 100 mile radius. This is the largest volcanic eruption that has ever been recorded, with details of its eruption you can read here.

It was 100 times larger than Mt. Saint Helens and was over 4 times stronger than the Krakatoa eruption. For 2 weeks, Mount Tambora spewed lava so violently, that the smoke blocked the earth from the summer sunlight. This resulted in a year without summer and the death of hundreds of thousands of people.

Could you survive the initial blast? If you were near the volcano, you would have experienced a quick, violent death. There was not enough time to run away. Many people who lived farther out in the Asian region also died, but it was from hunger and starvation.

Following the eruption of Tambora, in China the temperature dropped and the summer rice crop froze, which resulted in a famine. Taiwan endured cold weather and snow. People were so hungry that they were eating white clay to survive. Some parents went to the village market to sell their children, while others killed them so they would not suffer anymore. In other areas of Asia, the explosion caused a drought and then flooding when the monsoon season began. With all of the floodwater came a rare and deadly strain of cholera. Consequently, by the end of the 1800’s, millions died from this disease.

Could you survive if you had been in Asia at the time? You might have had a chance if you were far enough away from the immediate explosion and knew that you needed to move, and fast.

Once far enough away, however, back in the 1800’s there was no a way to test or treat cholera. People would begin to have symptoms of the flu and never recover. With limited clean water, it is easy to see how the deadly strain was able to spread to others so fast. You can learn many water purification techniques here and check out a portable, light weight way to get clean water.

Nowadays, surviving an outbreak of cholera or some other waterborne disease is less of a challenge because we have easy access to portable and effective filters. This is an item that should be in every emergency kit/bug out bag, and they are inexpensive enough to include a second one as a backup.

Northeastern America and Western Europe felt most of Mount Tambora’s wrath the following year. The temperatures fluctuated from warm to freezing, in just a day or two. A hard frost was experienced every month that same year. In some areas, up to 18 inches of snow fell in June. Small farm animals died due to exposure and in Montreal, birds froze and just dropped dead. It was difficult for the residents in the area to see the cold continue. When the warm days would come, people thought that the worst was over and began planting again. The fierce cold would come back and freeze all the new plants. Famine was inevitable.

By August things were looking up, or so it seemed. There were warmer days and farmers began planting crops again. They were hoping that they could grow something to harvest in October. Suddenly and without warning, a strong, cold storm hit the area, followed by 2 days of freezing temperatures. Farmers wrapped their plants in rags, but the crops were still destroyed by the cold. As a result, the shortage of crops caused hoarding and the price of produce tripled. In New Hampshire, hay was six times its normal cost.

Could you survive on minimal food?  The people who lived in the northeast could not have imagined that the cold spell would last all summer. If they knew, they may have done some things differently. Not only was food scarce but the food that was available was priced sky high.

Back in 1816, one way to survive would have been to ration stored food, and this isn’t a bad strategy to consider now, in modern times. This is just one reason preppers set goals of having 1 month extra of food, then 3 months, and eventually a year or more.

One other survival strategy would be knowing how to proces livestock and storing the meat before the animals starved and died. It must have been devastating for farmers to watch their animals die without any way to preserve the meat, long term. Learn more here about the benefits and importance of canning meat.

Knowing how to preserve food is a vital survival skill to learn– canning, dehydrating, and even knowing how to salt meat and fish for preservation. All these skills take time to learn, supplies for the process, and instructional books, like this one for salting meats.

Survival could depend on eating strange foods

Following the eruption of Mt. Tambora, people living in the areas affected were counting on the food they grew in the summer to get them through the long winter. These summer crops were preserved and extra produce was either sold, used to barter, or exchanged with neighbors for other foods.

During this cold summer, potatoes, rye and wheat were the only crops that were enduring the freeze. Due to extreme hunger, many people resorted to eating pigeons, raccoons, wild turnips, nettles, mackerel and hedgehogs. To survive, they ate foods that were not normally part of their diet.

There are some remarkable stories that did come out of this tragedy. One is about a small community of farmers that survived because on older farmer had 40 bushels of wheat stored up. He chose to share his wheat with his neighbors. Those simple 40 bushels saved lives. After the man passed, those that received wheat, put their money together and had a statue erected in honor of their generous neighbor.

Could you survive eating food you may not like or the same food over and over? When long term food shortages happen and unusual food could be difficult to eat, you could try combining a familiar food with a new one. Replacing one type of vegetable with another in a recipe can help make things more palatable. Read about the art of foraging and what you can do to feed yourself in an emergency.

Like the old farmer who shared his wheat, working together and sharing with those you know and trust can help stretch current resources. Also, having a group of people with a variety of skills and ideas can help increase the chances of survival.

Packing up and moving

During that year without a summer, many people in New England decided to head west, not wanting to chance another bad year. They sold their farms for what they could and headed out to find a new area to settle. Some moved to Ohio, believing they would have mild winters there, others went to the Midwest. This migration helped establish what is now known as the American Heartland. At the time, these decisions were made on limited information and knowledge. No one understood why they were not experiencing a warm summer. Their concern was that the cold summer weather would continue into next year’s planting season.

Would you make the decision to stay and hope things would improve or would you leave and start a new life in an unknown area? Not having up to date and reliable information sets the stage to make very bad, life-threatening decisions.

Back in 1816, not knowing about the volcano and weather patterns, people had to make a decision they felt was best for their survival. We can now go to the NOAA site and learn about weather in our area and around the world, we have weather apps on our smartphones, and weather radios that alert us to severe conditions. Unless the power grid was to fail over a broad area and for a very long time, the information would be there to make rational decisions.

In 1816, many families lived in close proximity and were dependent upon each other to survive. Moving would have been a big commitment with no guarantees. I am sure there were a lot of conversations among families and friends about what to do. Needs and circumstances were different for each family. Learning how to communicate with others, analyzing your situation and developing problem solving skills can increase your chance of survival. You can read tips on how to make big decisions here.

During that disastrous summer, the government expanded their weather collection data. Almost 2 dozen weather stations were tracking the weather 3 times a day and sending regular reports to Washington, hoping that scientists could learn more about this odd occurrence. While citizens worried about their livelihood, congress voted to double their own incomes. Other politicians who ignored the struggles of their constituents were not voted back into office. Hoping to rely on government to come to your rescue is a fool’s errand, at best, as you can read in this article.

There was not a Federal Emergency Management Agency (FEMA) in 1816, that could have alleviated at least some of the suffering. Back then, most people had the mindset to prepare and save for a rainy day, but for farmers, the year without a summer was more devastating than they could have prepared for. Nowadays, very few Americans have that same mindset and many, unfortunately, will realize no one is coming to their aid in a worst case scenario.

Could you survive something disastrous without the help of the government? It is best to assume that the government will not be able to come and take care of you. FEMA has been asking citizens to be prepared and have at least 3 days’ worth of food and supplies stored in case of an emergency, but even this measure is woefully inadequate. It could take at least that long for the government just to arrive with help.

Therefore, be wise and take responsibility for yourself and your family by being prepared. Learn about the possible risks in your area and prepare for them. Store enough food, water and money to help you survive financial hardships, natural and man made disasters. FEMA has information about the hazards near your home and how to prepare for them.

The odds of another Mount Tambora are pretty slim according to scientists.Yet other events that can cause a shortage of food and unusual weather, and there are many active volcanoes that would cause very similar results, affecting an entire hemisphere, if they ever erupted.

Learn from those who lived through Mount Tambora and that year without a summer, and apply those lessons into your survival plans. Look here for downloads and information about getting started on your emergency plan. For more reading about preparing for the everyday disasters and worst case scenarios, check out this family survival manual! 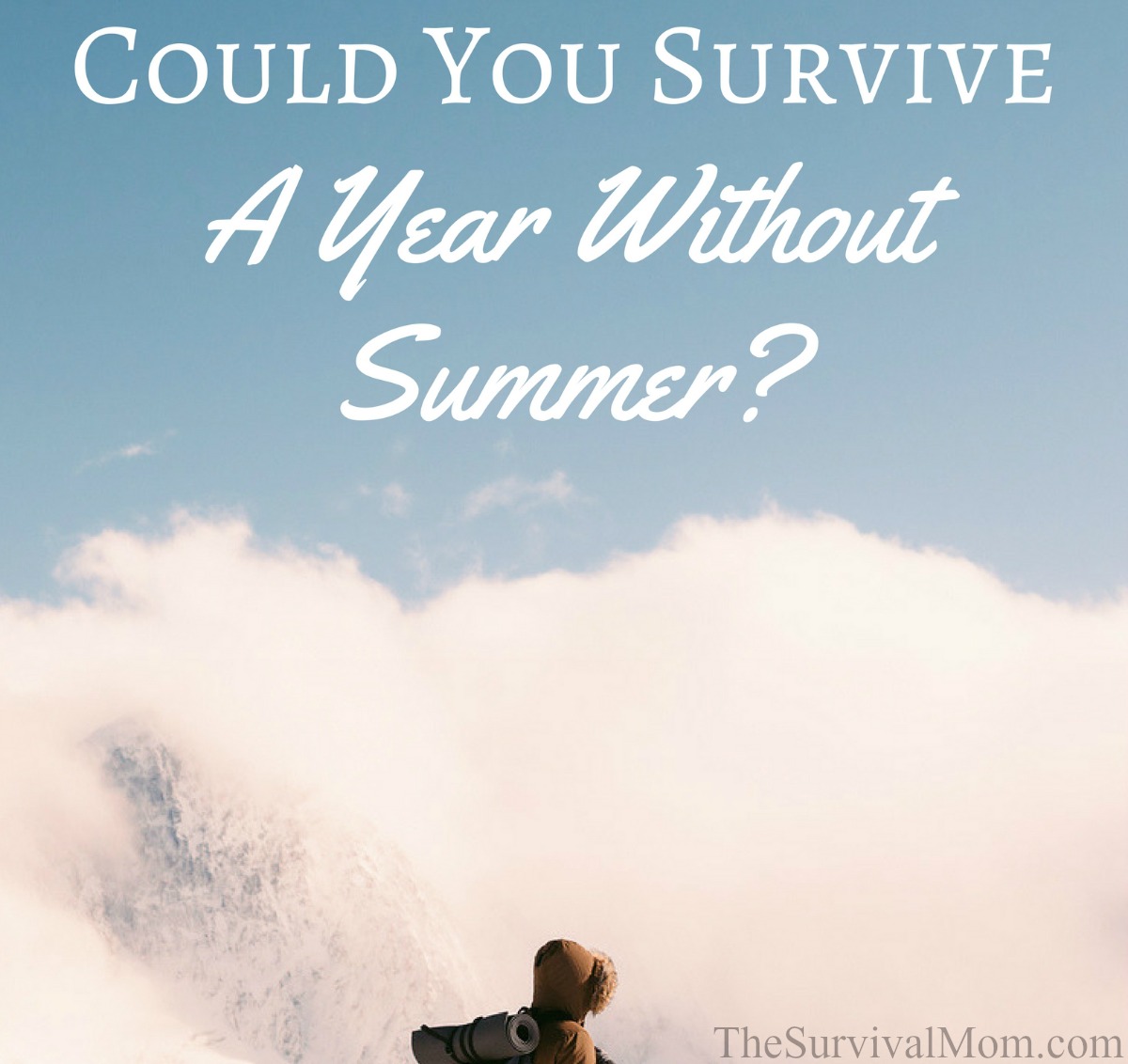 Erin Foster is mom to 5 kids. West Georgia is home where you can find her reading, camping, enjoying a play and on any adventure she can do with her family. Along with a B.A. degree in Emergency and Disaster Management, she has an EKG technician and nursing assistant certificate.