Skip to content
36 shares
Some of the links in this post may contain affiliate links for your convenience. As an Amazon associate I earn from qualifying purchases. 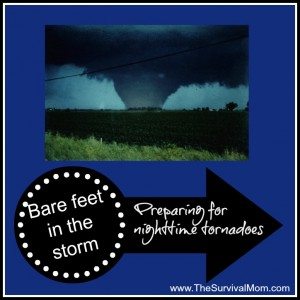 I have a healthy fear of tornadoes now, especially nighttime tornadoes.

I thought I was prepared, but I’m not – and you might not be either.

Too close for comfort

I lived a few hours away from Joplin, Missouri, when the EF5 tornado hit on May 22, 2011. Being that close and seeing the kind of destruction that could happen so quickly prompted me to start preparing our family for disasters.

I made sure our basement shelter room was set up with food, blankets, flashlights, and water. Our community did a lot of fundraising and supply gathering for that city’s recovery. If you want to refresh your memory about the Joplin tornado, read about what happened in the hospital during the storm here: Condition Gray Inside the Hospital.

Right over my head

Two years later on May 20, 2013, I saw a tornado start forming right in front of me. I was at a dance studio with three of my daughters during a thunderstorm. I was keeping an eye on the storm through the window when I saw some swirling in the clouds. I checked the radar on my phone and saw a hook when I zoomed in. When I looked back up, the swirling was starting to get lower and lower.

“We need to take cover,” I called out. The receptionist questioned my concern by saying there were no sirens going off. I ignored her and several other parents and I started gathering everyone we could in the two bathrooms. When the noise died down, we all came out and started leaving to head home. Then the sirens went off and an F1 tornado touched down a few miles to our east.

Lessons learned – tornadoes form quickly and sirens can sound off too late. Trust your own eyes and judgment.

A new location, a night storm

According to Weather Underground, about 79 tornadoes touched across the U.S. during a set of storms at the end of April 2014. I went to bed one of those nights with my phone volume on its highest setting in case severe weather hit us. I started walking through in my head what I would do if the sirens went off and I realized that we are not as prepared as I thought. If we needed to take shelter during the day, we were all set – nighttime was a different story. 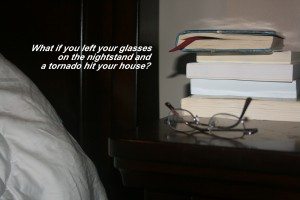 If a storm were to have hit that night and damaged our house while we were in the basement, none of us would have shoes on, my children would have been in pajamas (shorts and nightgowns), and I had none of their nighttime comforts (pacifiers, blankies, and stuffed animals).

So, this week, I’m putting some more items in the basement to prepare us for nighttime tornado sheltering. You may want to think about some of the following as well.

–       Pants (especially for those who sleep in shorts and nightgowns)

Or better yet, hold a tornado drill during the night with your family. Then look around and imagine being trapped in that spot for several hours or a day if your house is damaged. What would you want to have?

Remember, with tornadoes, sometimes you only have minutes to take shelter! I will always have a healthy fear of tornadoes, but now I finally feel my family is well prepared if one heads our way. (And, I hope one never does!)

What would you add to my list of tornado preparedness items?

20 thoughts on “Bare feet in the storm: Preparing for nighttime tornadoes”