Earthquakes are frightening. Especially if you’re not prepared. This doesn’t have to be you. If you’re wondering what you can do now to help you in the event the earth moves under your feet, we’ve put together this list of earthquake gear you should have for use in the immediate aftermath of an earthquake. 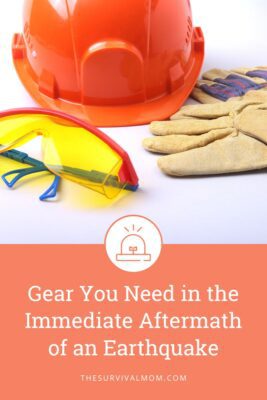 So how is protecting your eyes important in an earthquake?

Well, a pair of safety goggles is helpful because once the tremors stop, there will be dust, debris, and possibly smoke in the air. You’ll be grateful for a way to protect your eyes at that point.

Additionally, after seeing pictures of the wreckage of my friend’s Northridge apartment, I imagined trying to find my glasses in the middle of that mess. If my glasses fly off the nightstand, fall to the floor, and disappear down some dark and dusty crevice, I am immediately handicapped.

So I bought a glasses case on a string, of the type worn around the neck. I tied it to my bedpost. Every night for a thousand nights when I’ve gone to bed, I’ve placed my glasses in that case. They’re never on the nightstand anymore. I reach for them automatically in the morning. I always know where they are.

Nothing can shake them loose.

When the earth starts shaking and you hear glass breaking (and kids screaming), you can’t afford to be stumbling around, unable to see potential hazards. If you can’t see those hazards, you may be in more danger than you realize. Make it a habit to keep those eyeglasses or your contact case right next to your bedside, and preferably in a drawer where they can’t slide off.

Just like protecting your feet, you may be moving sharp objects and all manner of debris. You don’t want to tear up your hands and end up with an infected wound. Wear gloves and not gardening gloves. Something like good, durable leather gloves is what you want in your earthquake gear.

To protect your head, along with the rest of your body, dive under the nearest sturdy table or desk. Once the rattling stops, you’re still not safe from falling beams, ceiling tiles, light fixtures, etc. An inexpensive hard hat, stored in an accessible location, may turn out to be your best friend.  You’d be surprised by how many injuries during an earthquake are caused, not by people falling through fissures in the earth (that’s 100% Hollywood!) but by the ordinary injury of being knocked on the head by a lamp or a flying copy of a Tom Clancy book.

Of course, the electricity went out in Northridge, and it was night, so it was dark. If the same thing happened to me, I would want light immediately available.

Normally I keep flashlights in the junk drawer in the kitchen, in the basement on the tool bench, and in the car under the seat, but I didn’t want to be in a position where I had to find a flashlight to find a flashlight. I didn’t want to waste any time at all fumbling around in the darkness and confusion searching for it. So I bought a flashlight with a wrist strap attached, I gave it fresh batteries, and I hung it from my bedpost along with my glasses. Extra batteries went in a nightstand drawer.

I also bought a hand-cranked wind-up flashlight/radio/siren/phone charger. I tuned the radio to the station that’s designated emergency broadcast channel in case of emergency and hung it by its wrist strap from the bedpost as well.

My friend wanted to get into her car and go somewhere safe, but her car was in the garage, and the garage was askew.

The garage door would not open.

She couldn’t even sit in her car because the doors were locked and the keys were in her purse, and her purse was probably on the dining room table or maybe the kitchen counter. Both places were buried under so many splinters.

There was a magnetic key under the bumper, but it was dark, and she didn’t have a light.

She was also barefoot, and the garage windows had shattered all over the ground. She thought she had a flashlight, but it was in the locked car. (Later, it turned out the batteries were dead anyway.) So she just stood around in the street and waited for someone to help her to the hospital.

I don’t want to stand around and wait for someone to show up to help me. If it’s ten below zero, waiting around isn’t an option.

So I had a set of spare car keys made up. I added copies of keys to all the places most important to me— the places I’ll want to check first after a disaster, like my office and my husband’s business.

I clipped the keyring to the wristband of the flashlight hanging on my bedpost. So now, if I’m bleeding and frightened and cold, I can sit in my car and have heat and light and a radio. I’m glad I don’t have a garage because it will never collapse, trapping my car. I might be able to get to the hospital without waiting for help.

When my friend jumped out of bed, she did it instinctively, without thinking or looking before she leaped.

She discovered the hard way that every framed family photo had fallen off her dresser top.

Every picture on the wall fell.

Every window in her apartment shattered.

The floor was covered with shards of glass.

Her injuries came not from the quake but from cutting her feet while making her way out of the wreckage. In fact, 80% of the injuries treated in area hospitals were for cuts from the knees down.

So I took an old pair of sturdy tennis shoes that I don’t wear anymore, and I put them underneath my bed. In one shoe, I stuffed a pair of socks, and in the other shoe, I stuffed a clean pair of underwear (because if I need ‘em, I’ll be glad they’re there) and also a big bandana. If I’m going to be doing any crying or bleeding or screaming or throwing up, a hanky could come in handy.

Here’s where a pair of Crocs might come in handy. Love ’em or hate ’em, they are great for slipping on, they’re wide enough to allow for thick socks (important if you’re dealing with chilly temperatures), and because of their sizing and design, it takes a while for kids to outgrow them. No, they aren’t Red Wing work boots, but neither are they $200+. If you have panicking children nearby, your first thought will be to get to them, even if it means walking over broken glass, so protect those feet!

To ensure that shards of glass didn’t fall into the shoes, I stuffed them into an old pillowcase, which was later upgraded.

Thinking about the sub-zero scenario, I added a few more things to that pillowcase: a pair of jeans (with pockets stuffed with useful items, more on that in a moment), a warm shirt, a sweatshirt, a hat, and sturdy leather gloves.

In the pockets of the jeans, I placed:

In my mind’s eye, I rehearsed the scene a few times in which I practiced NOT jumping out of bed but instead reaching under the bed for the emergency pillowcase first. This way, I can at least put on shoes to get out of the house and have clothes to put on while standing around in the street.

In Northridge, as in most earthquakes, the shaking broke natural gas lines, water pipes, and electrical lines. Water heaters tipped over, and gas and water poured into basements. Explosions and fires popped up all over. The overwhelmed fire department couldn’t put out the fires because the water mains were broken.

So under my bed went two fire extinguishers – one for my husband, one for me.

Shutting off the natural gas requires a wrench, so I put a wrench under my bed. For good measure, I tied another wrench to the gas valve.

Then I even spoke with my neighbors and found out where their utilities are located, so if they are trapped in their house, or if they can’t find their glasses or their shoes or a flashlight or a wrench, I can turn their gas lines off before their homes blow up. This was partly altruistic and partly selfish because if their houses burn down, the fire department isn’t going to be able to do anything about it – and if their houses burn, my house may well burn down too.

The fire extinguisher and wrench may save my house from complete destruction while others burn down around me. In my imagination, I rehearsed putting on my shoes, grabbing the flashlight, and running outside to turn the utilities off before the house blows up.

Communications will be difficult or non-existent, so to hedge my bets, I added a telephone that does not require electricity but can be plugged directly into the phone jack. I also added a set of walkie-talkies with spare batteries–one for my husband, one for me. I put in a battery-operated AM/FM radio that clips to my belt. I wrote the emergency broadcast information in magic marker on the radio itself and marked it on the dial.

I stuck in a really good Swiss Army knife, along with pliers and a hammer in case I had to help pull people out of the wreckage through shattered windows. I also included extra flashlights and more batteries because I expect working flashlights will be in short supply.

Assemble and Have Ready an Earthquake Emergency Kit

Place your bug-out bags or emergency kits somewhere that can be easily accessed if a house collapses on it. Garages with no rooms on top of them or sheds may be the easiest places to dig into to find a bug-out bag. If your home is severely damaged, there is a good chance your vehicle may be, too, along with local roads.

Plan on walking to wherever you need to go or plan to camp out in your backyard. Have a few locations in mind since the earthquake damage will be unpredictable.

Read more on what your earthquake-ready bag should include.

What kind of earthquake gear do you have ready for immediate use after an earthquake?