Skip to content
181shares
Some of the links in this post may contain affiliate links for your convenience. As an Amazon associate I earn from qualifying purchases. 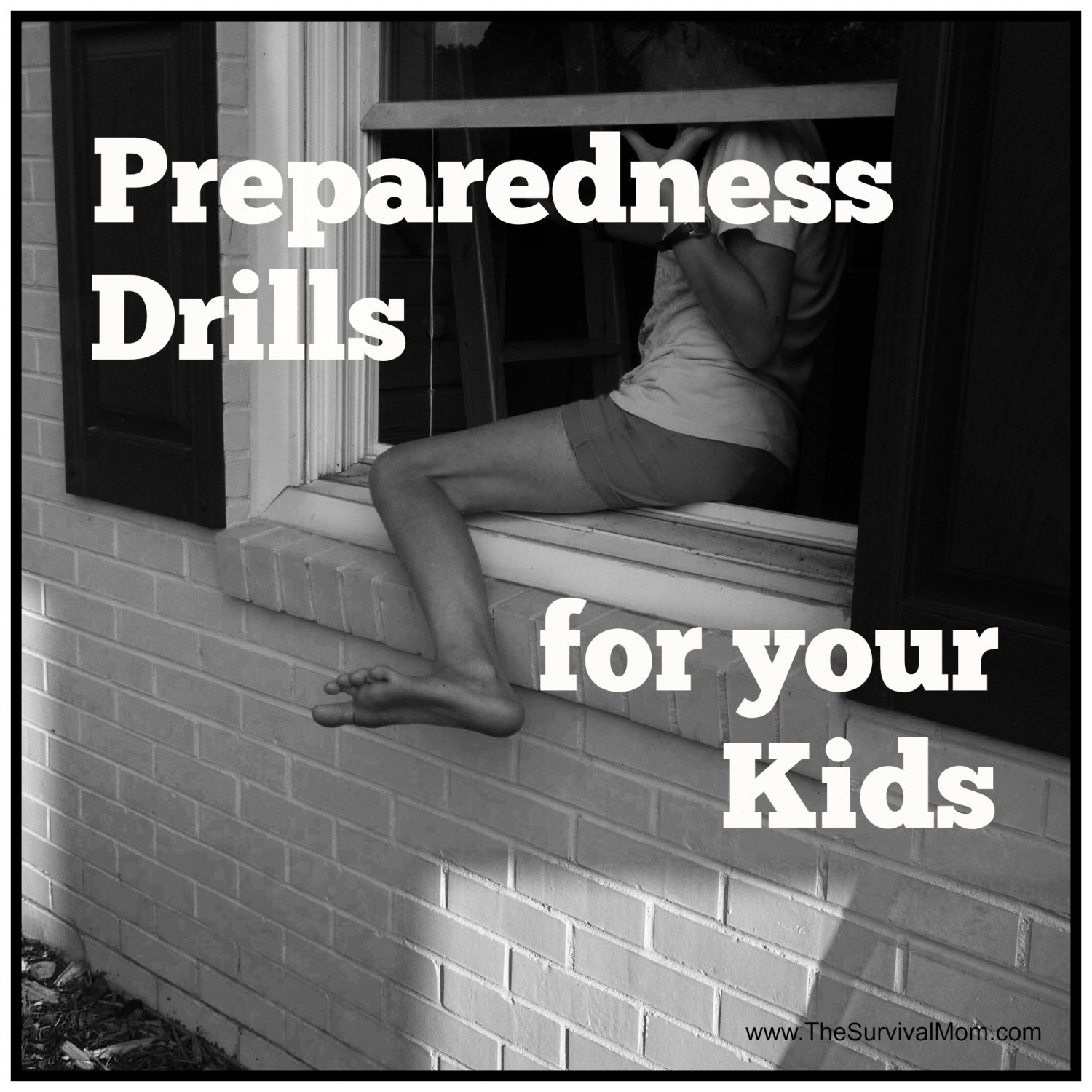 If your kids go to school, they have undoubtedly participated in a school fire drill. Most bus riders have gone through a bus evacuation drill out the back emergency door. Some schools are even conducting active shooter drills as preparedness drills.

But have you had a fire drill in your own home? Have you talked about how and when to exit your car after an accident? Do they know what to do in case there is a shooter at the mall?

Parents tend to TELL their kids what to do instead of SHOW them. We say that in case of fire, we will meet at the big oak tree across the street. What we don’t often do is show them how to actually get to that oak tree. We TELL our kids, “Don’t get in a car with strangers,” but we don’t SHOW them how to fight back if someone grabs them.

As children get old enough to be home or out in public on their own, these drills become even more important because they will not have you to give instructions in an emergency. We need to prepare them, using active drills, to protect and potentially save their own lives.

It’s early in the morning. The kids are still asleep and the sun is just starting to rise. I’ve woken to use the restroom but decide, since I’m up, it’s a great time for a drill. I poke the test button for the smoke detector, go into my daughter’s bedroom and yell, “FIRE DRILL! FIRE DRILL! FIRE DRILL!” She realizes what is happening and rolls out of bed. She hurries to the door and places her hand on it. “The door is hot!” I shout. She turns to the window, unlatches and opens it, removes the screen and crawls out the window.

I then proceed to my son’s room. He feels the door for for heat. “The door is not hot!” He grabs a shirt to cover his mouth, opens the door, and begins to low crawl down the hallway. He makes it all the way to the front door, unlocks it, and goes outside to our meeting point across the street where his sister is already waiting.

After the drill, we talk about the possibility of going to a neighbor to call 911 and what, if anything, they could have done differently.

Sometimes during a drill I throw a curve ball. “The windows are stuck! You can’t get them open!” We then talk about it being okay to use a chair to break the window and place a blanket over the window sill to prevent cuts from broken glass. I have them pick up a chair and practice swing it so they get an idea of how heavy it is and the kind of force they would need to use. Another test: “The cat is meowing in the hallway!” As much as we love them, their job is NOT to go after the pets.

The first time we ran through this drill, I learned that not only did my daughter not know how to work the window locks, but that her skinny arms weren’t strong enough to actually open the window. She ended up practicing opening the window every few days until she figured out a way to leverage her body weight and get them open.

If you live in a two story home, you should have a fire ladder. (You do have one in each upstairs bedroom, right?) But have you actually ever used it? Don’t just have it sitting in the box hoping you’ll never need it. You do not want your child to try to figure out how to use it with a fire burning outside the door.

Some fire ladders are single use for emergencies only while others are multi-use and can actually be used in a full drill to climb out your window. Even with a single use ladder, you can show your children how to attach it to a window sill, what steps to take to deploy it, and tips for climbing out the window to safety. With a multi-use ladder, practicing  climbing to the ground will reduce the level of fear of the ladder itself during a true emergency.

Children, young ones especially, need to be reminded that firefighters may look scary with all their gear on. Show them what a firefighter looks like and teach them that there is no such thing as a “stranger” when it comes to someone helping them out of a fire or other disaster. They should go with anyone who is there to rescue them.

Don’t just show your kids the multiple ways to get out of the house if it is on fire. Also show them all the ways your home is protected to prevent fire. Show them the smoke detectors and fire extinguishers and explain how they work. Teach them of the importance of not leaving the kitchen when something is cooking on the stove top and to unplug curling irons and toasters. Remind kids that matches, lighters, and candles are not toys and shouldn’t be used except with permission from an adult, while also teaching how to properly use and extinguish them.

These drills follow the same line of thinking as the fire drill. Even if your area isn’t prone to these types of disasters, teaching your children how to respond to them is still a good idea. Show them some short videos on tornado and storm safety, teach them safe earthquake response, and then later start a drill when they aren’t expecting it.

“Don’t get in a car with strangers.” It’s good advice, but does your child know how to fight off a larger adult who has grabbed them? You’ve probably also taught your children not to hit or kick or bite. But does that include against strangers who are trying to abduct them? Be sure your children understand that any level of violence from them is acceptable when fighting off someone who is trying to hurt them. Find a self defense for kids class in your town so they can not only learn practical ways to fight back, but they can also practice hitting and kicking. Believe it or not, most people, adults included, don’t know how to effectively hit another person in their own defense.

I was in a fairly serious car accident a few years ago. No one was badly hurt but three cars were smashed up, and fortunately my children were not in the car with me. In the immediate moments after the crash I sat their dumbfounded and needed to be given instructions to get out of the car. I learned that I needed to discuss this with the kids.

If we are in an accident, what should you do? If the driver or another adult is able to give instruction, kids are to comply. But what if the adult is unconscious or otherwise unable to help? If you are able, undo seat belts and get yourself and your siblings out of the car together. WATCH FOR OTHER CARS when leaving the vehicle. If someone is very injured, leave them in place and get help. If they learn nothing else, the two rules for a car accident are: if you’re able to leave the vehicle, do so… and watch out for other cars.

This is the hardest one for a lot of families. We worry about scaring our children. We don’t want to even think about our children being in an active shooter situation. But teaching your kids what gunfire sounds like, the difference between hiding and taking cover, and what to do if they find themselves in this situation could mean the difference between life and death.

The run-hide-barricade-attack training response is good for older children in school who will potentially have the ability to make their own decisions in an active shooter scenario. It is also good information for all children who find themselves at other public places (like malls, sporting events, restaurants, etc) when a shooter arrives.

Sometimes when we are in a store or restaurant, I will ask my kids, “If you heard gunshots right now, what would you do?” Depending on their answers and the situation, I might ask additional questions to get them thinking about a plan. For yourself, or for older children, consider this short video training for active shooter response.

What’s one of the cardinal rules when we leave children at home on their own? Don’t open the door to strangers! Have you told your children what to do if a stranger comes in anyway? As soon as someone starts to force their way into the house, your children should leave out another door, preferably on the other side of the home and then go to a trusted neighbor for help. If they cannot leave the house for some reason, grabbing a phone and hiding while calling 911 is the best response. Again, don’t just talk about what to do. Actually practice running out an alternate door and going room to room to identify good hiding places.

My children have been very fortunate to be able to participate in “Be Ready Camp” sponsored by the State of Alabama. One of the most important things they learned was basic first aid. They were taught with a hands on approach how to stop bleeding, splint a broken bone, and more.

Children can also learn CPR and use it effectively. If you can’t find a local class that will teach children, talk to your child’s school about teaching a course to students or purchase a kit to bring home to teach your kids yourself.

This is a new one for my family. While I had given the “Say no to drugs” and “Don’t get into a car with someone who has been drinking” lectures, we hadn’t had real, applicable discussions about these situations. I read an article recently that talked about this very thing and it was a light bulb moment for me. We can’t just TELL our kids not to drink, but instead we must help them find the words to use when the situation happens. Kids often want to say no, but they just don’t know how. I won’t rehash the whole article, but go read it. Failing to know what to do in these social situations can lead to a personal or family disaster just as devastating as any of the other incidents mentioned here.

Children are capable of handling more information at an earlier age than many parents give them credit for. We’ve all heard of the stories where a very young child calls 911, or a child who has been taught survival techniques is able to save their own life. You know your child better than anyone else. Keep the lessons and skills age appropriate.

The idea is not to scare your children or have their thoughts constantly filled with “what ifs.” The discussions and drills I have with my family my seem extreme to some, but it works for us and my kids are well-adjusted, prepared individuals. Decide how much preparedness you want to teach your own kids and begin to drill them. Without the drill, the information might be lost in time. Every skill you give them is one that might save their lives.

17 thoughts on “Preparedness Drills to Do with Your Kids”