Skip to content
52 shares
Some of the links in this post may contain affiliate links for your convenience. As an Amazon associate I earn from qualifying purchases. 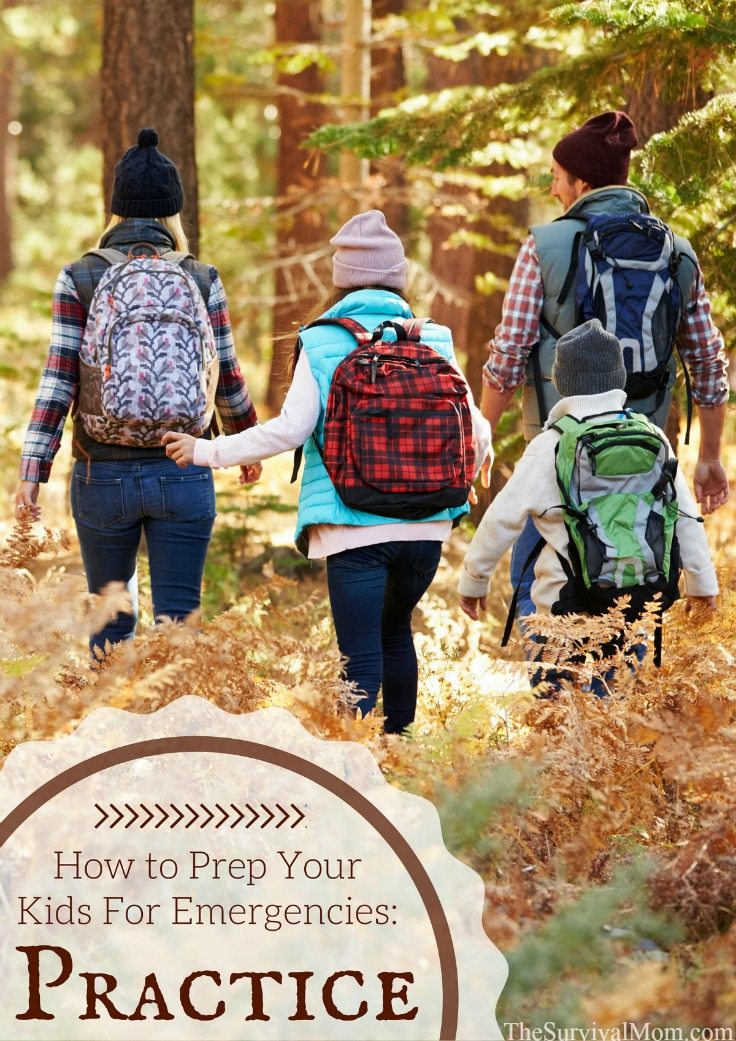 This is the third and final part of our series on involving children in your emergency preparedness plans. In case you missed it, here are parts 1 (supplies) and 2 (information).

Running around gathering up all your stuff is pretty hectic, even when you have all the answers. From a little kid’s perspective, all that chaos can be overwhelming. You can easily diminish the stress of the event by holding regular evacuation drills with your family.

Practice is the part of emergency evacuation that is least exercised but arguably most important. It’s easy enough to buy a 72-hour kit and explain to the kids what it’s for, but it’s less easy to set aside the time for an evacuation drill. For some reason, this part of preparedness often takes a backseat. This is especially true if you live in an area that hasn’t experienced a natural disaster in some time.

In the spirit of research, (and also in the spirit of practicing what I preach) we finally set aside the time to actually, in real life, do a trial run of our evacuation plan. Here’s what our trial run looked like:

Before our drill, my husband and I sat down with the kids (ages 6, 4, 2, and 2 months) and planned out what we would be doing and who was responsible for what. Each child capable of walking would be responsible for his or her own emergency kit, comfort items, and shoes. Mom (that’s me!) would take charge of the baby and make sure we had all of her relevant supplies. Dad would grab some extra containers of water, and any handy snacks that happened to be in the pantry.

We made excellent time – all four kids were buckled in the minivan along with our 72 hour kits in 4 minutes, 55 seconds. We congratulated ourselves and took a victory lap around the block. It wasn’t until after we unloaded and put everything away that we realized we had forgotten a lot of stuff:

My youngest was born with a cleft palate, and I remembered to grab all her taping supplies for her face, but didn’t realize until after our drill was complete that her dental appliance had fallen out and was left behind in her baby swing. If our evacuation had been for real, that would have been an absolute disaster.

We learned some other things, too. Even though everyone knew this was for practice and we weren’t actually in any danger of zombie attack, my two-year-old panicked. “I can’t find my blankie! Where’s my other shoe?” I told her, as I was packing up the baby’s things, that she should check upstairs in her room, but for some reason she could only walk around in circles in the living room worrying herself sick. In contrast, my oldest had his shoes, socks, favorite toy, and 72 hour kit in hand and was the first one to be buckled into the car. The four-year-old cheated and found his own favorite toy and blanket long before I started the stop watch, the second I announced the evacuation drill.

READ MORE: Do most people think clearly and rationally when under the gun with a real life emergency evacuation? Read this.

We experienced a slight hiccup when the 2-year-old was unable to lift her own 72-hour kit. She struggled along with it out to the car for about five feet before collapsing into a puddle of toddler frustration. Only later did we realize that she had been trying to lift her older brother’s kit – the two kits are in identical bags.

My husband, whose brain switched into autopilot when we began our drill, briefly forgot that we had a fourth child. Not until we unpacked the car did he turn to me and ask, “Oh, no! Did we forget the baby?” (No.) In his defense, she was in a really quiet mood at the time.

What We Will Do Differently In The Future

So knowing how our trial run went – the good and the bad – how will this impact our future drills, or even a real evacuation?

What Else Should Be Practiced?

Evacuations aren’t the only thing that we need to drill with our kids. Schools, businesses, and military bases around the world participate in fire and earthquake drills. If it’s good enough for Amelia Earhart Elementary down the street, it’s probably good enough for all of us.

In my neck of the woods, the local government sponsors annual earthquake drills. I’ve taken the opportunity to participate in them with my kids when I can (it usually involves hiding under the kitchen table), and I’ve found this to be very helpful. When the recent earthquake in Ecuador came up as a topic of conversation, my 4-year-old interrupted to say exactly what he would do if we experienced one at home. His personal emergency plan was exactly the one we had discussed and practiced as a family. That’s my boy!

If disasters like earthquakes and tornadoes are a fact of life where you live, here’s one more tip.

Recent reports of the horrific tornado season made me think of a common piece of advice, “Have some form of I.D. on yourself and your kids.” Well, in the midst of chaos, I’ll be lucky to find my wallet much less my kids’ homeschool I.D. cards, but what if there were something easier? What if there was a type of I.D. that you could keep hanging on a bedpost?  Something like a lanyard would fill the bill.

The I.D. card itself doesn’t have to be official. It can be as simple as a school photograph with information printed on the back: name, birthdate, address, parent’s cell phone, medical conditions (if any), and then laminated. Lanyards are inexpensive enough, heck, you probably have one or two around the house, in order to have one by each bed, a set in an emergency shelter, and others in emergency kits.

Instruct your kids to put on their lanyards as soon as they hear a warning siren go off or feel a tremblor.  Have a drill or two, or three, until you are sure they know where their lanyards are kept and know what to do with them.

Emergencies are scary enough without worrying about your kids wandering off or emergency workers finding family members injured or unconscious without any identification. A lanyard I.D. for every member of the family is an easy way to make sure this small, but important, detail is covered.

Fire drills, admittedly, can be a little tricky because they often involve climbing out windows. All the more reason to practice! Invest in a decent fire escape ladder, and help your kids become comfortable climbing down them. If you have very young children who cannot climb on their own, then I encourage you, the parent, to become proficient at using a rope ladder while carrying a kid with one arm. I confess this is a skill that I have not yet mastered, but it’s one that I know will be really good to have.

Have you practiced your evacuation plans as a family? If so, we’d love to hear about it in the comments.

Resources to help you prepare 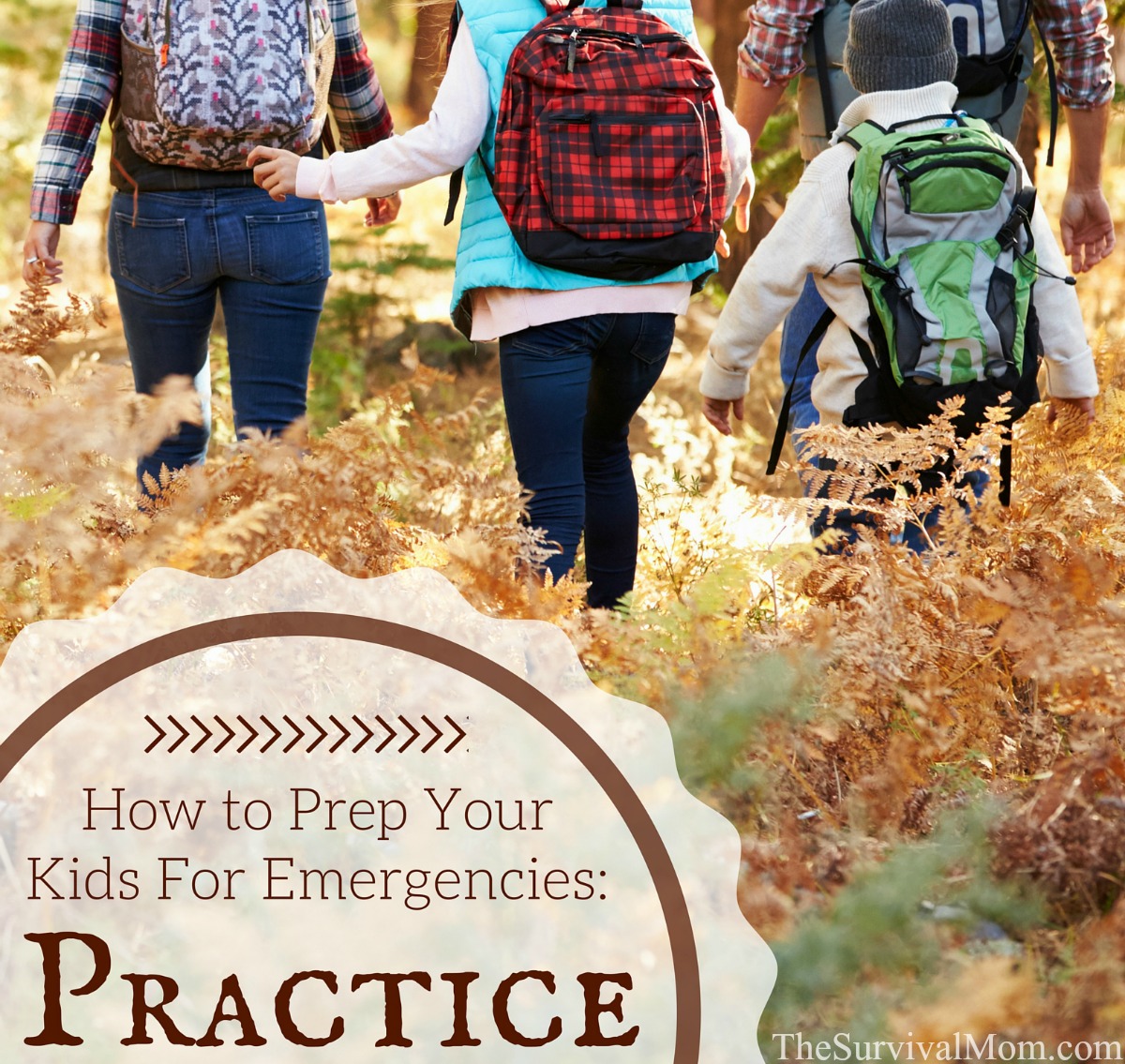 2 thoughts on “How to Prep Your Kids For Emergencies: Practice”