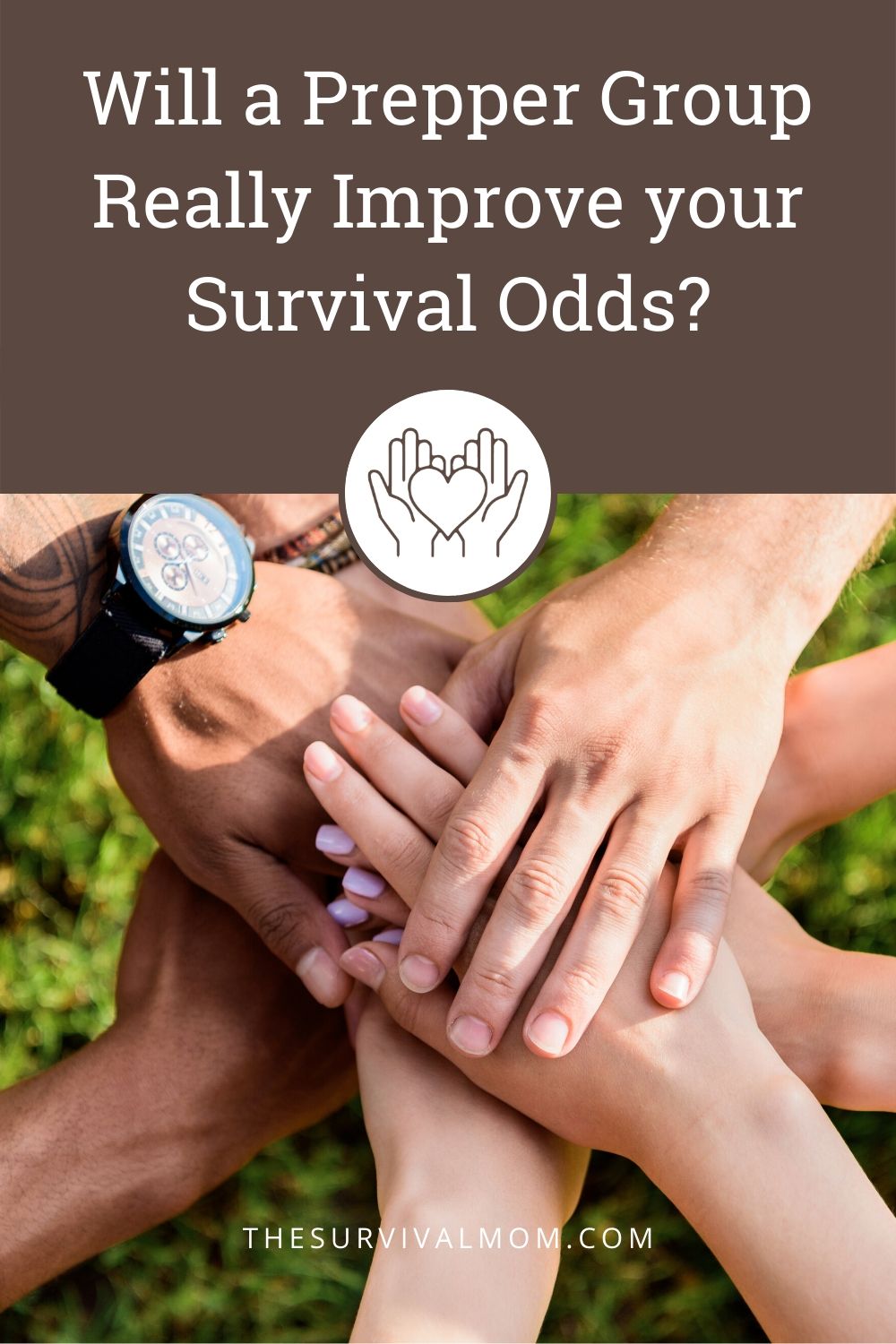 A popular topic on survival forums, blogs, and websites is the concept of the DIY survival community. Most preppers worry they won’t survive if they don’t belong to a survival or prepper group.

The concept of a prepper group goes something like this.

Every group should have a doctor, a dentist, one or two former military personnel, an experienced gardener or farmer, maybe a teacher, and an assortment of others with strong practical skills, such as hunting. To form your own survival community, you should begin seeking out like-minded people who fit these specific slots and begin making plans for establishing an actual survival retreat as a group.

In theory, this sounds ideal, and, again, in theory, it should work. Right?

After talking with a few people who have belonged to groups like these or are active members of one, there are some downsides you should know about before jumping headfirst and signing up.

First, how will you know for sure who is like-minded and also interested in joining with you? What process will you have for screening, and not just for your checklist of must-have skills?

Do you really want to cast your family’s future into the hands of virtual strangers? A few conversations in a Meet-Up group can hardly establish the deep trust necessary for banding together in order to survive.  Think about it. If this is your plan, you are placing your family’s security in the hands of people you may not know very well.

Who’s to say everyone will be in agreement when it comes to making hard decisions? And what will happen when the doctor’s son and his family show up at the retreat when everything hits the fan, expecting to join the group? Will your own extended family be equally welcome if you don’t happen to play such a critical role in the group?

Will the group be given a vote as to whether or not to accept these new arrivals or will the doctor, because of his or her importance to the community, be given a free pass when if a steady stream of their loved ones starts arriving? Just how long do you think the cohesiveness of the group will last if the majority votes to send away your parents?

By now, or at least, hopefully by now, you have figured out the lone wolf approach doesn’t work well in survival situations. Despite numerous fiction novels featuring the protagonist as a lone wolf survivor, having a team, group or MAG (Mutual Assistance Group) dramatically increases your chances for survival.

The key to a good group is having people you can trust and are compatible with. Unfortunately, finding those people can be a difficult task.

There are no simple rules for finding and picking group members, and you’re cautioned to be very careful. The average human is made up of a complex mixture of emotion and logic. While this makes us smart and compassionate, it also makes us dangerous. Compounding the issue, even more, someone you deemed as stable in normal circumstances can turn into either a basket case or a threat to the members of the group under pressure.

Finding prepper group members is a lot like finding a spouse: you don’t know how compatible they are after only a few meetings. Likewise, the success of a group is partly determined by everyone’s willingness to work hard at it. There will be differences of opinions, arguments, heated discussions, and many emotional conflicts. This is all normal, but it all needs to be properly addressed, especially since this group is supposed to be like a second family.

Dogs can be helpful with this, as they can pick up on your subtle clues, even if you’re not aware of them. By watching the dog, you can get a better idea of signals your subconscious is picking up on, though you need to be familiar with the dog and his or her tells.

Keep in mind you’re looking for someone willing to put the group’s needs in front of their own, but you also don’t want a martyr. How many cool toys someone owns should have no bearing on whether they are let into your group. It’s far better to have a stable, hard-working person who has nothing than it would to have someone who constantly argues every point and can’t agree to anything.

A common set of values and morals is a good place to start, including their perspective on preparedness. If you are of the mind to help all that need it, you won’t get along well with someone whose preparedness plan is to kill preppers and take their stuff. There’s a lot to gain by having members having a different skillset from yours, but having a common core of beliefs is fundamental to a good group. Skills can be learned but people with a common worldview are more difficult to find.

One practical requirement of potential group members is a concealed carry permit. When someone goes through the process to get this permit or license, you know they have had a background check, have been fingerprinted, and know at least the basics of safe firearm practices as well as some shooting ability.

A Snake in Your Midst?

The two attributes you should look for in a prospective member are loyalty and trustworthiness. People with these traits are low-security risks before, during, and after they become members of your group. Group members will learn sensitive information about everyone in the group, and the time to discover someone cannot be trusted is before everyone has divulged their private information.

Recognizing the true nature of someone isn’t easy. Most people put on some form of a mask when they are around others. You need to engage potential members in activities that will drive their true nature to the surface. It can take years to get to know someone, but there are activities and discussions you can engage in to help this along.

Stressful situations can also bring out someone’s true nature. Of course, at no time should they feel like they are under scrutiny, as this tends to make people behave differently.

While it would seem nearly any preparedness-orientated person would be a good fit for your group, the truth is the majority will turn out to be incompatible with your goals, plans, opinions, and ideas. Starting with that common set of values gives you a platform with which to begin.  Knowing this common base also gives you the opportunity to see if they uphold those beliefs they say are important to them.

When someone leaves the group is not the time to find out they have a criminal history, are revenge-driven, or have violent tendencies. A spiteful person who has learned your sensitive information can make your life miserable, particularly if they are sociopathic. Imagine trying to operate as a group knowing there is someone out there who knows all of the group’s information and has a large amount of animosity towards everyone in the group.

Once your group decides to have communal property for a bug out location, it’s likely this property will be unoccupied most of the time. If a disgruntled ex-member knows its location, it will be difficult to use that property for storage or caches. Even when there is an amicable separating of ways, unless you change everything about the group, ex-members will know this information.

Whether you are just starting to look for members on your own, or already have other members, always use OpSec, or Operational Security, when meeting with potential members. Don’t brag about what you or the group has, where it’s located, or any personal information. Even when it’s been decided to let someone join the group, you should maintain a level of OpSec and only reveal a little info at a time.

Groups like Meetup.com make it easy to find like-minded people and interact with them on a comfortable level. No need to divulge personal information and you can see how people interact with different topics and people. Once you’ve identified someone with potential, you can start to do things together and begin the learning process.

I recommend starting with people you already know, even if they are currently just casual, friendly acquaintances. Have a cup of coffee together or get the kids together for a playdate while you visit and get to know each other. Initially, everything is casual and friendly. In the unlikely event of a major catastrophe happening before you have an official survival group, these acquaintances may become your de facto survival group.

If you soon see that an individual, couple, or family just isn’t in tune with you in any way, move on and trust your gut. Pay attention not only to what they say but more importantly, their actions. You’ll soon know who you would want to hunker down in a bunker with and who you wouldn’t.

Here’s an option to the prepper group

In a way, the idea of establishing survival communities along these lines is reminiscent of the efforts in the mid-19th century to create utopian societies, such as the Icarians. Eventually, the groups disbanded, sometimes after just a couple of years. Usually, this was due to disagreements about how money was handled, who was in charge, how decisions were made, etc. Wherever there are people, there will be conflict.

In theory, I really like the idea of the make-your-own survival community. On paper, it looks great. The reality, though, could be very, very different. Even establishing rules, procedures, and a chain of command early on won’t guarantee a survival paradise with everyone emerging on the other side of the S hitting the F, as a cohesive group with everyone safe and healthy

Dr. Bruce Clayton, a well-known survival expert and author of eight books, has a different take on the DIY survival community. He claims these communities already exist. They already have a doctor, a dentist, farmers, food preservation experts, security experts, and teachers. This community is called a village. Dr. Clayton recommends doing some research and finding one of these villages, or small towns, in your preferred area, and then just moving there.

Yes, you’ll be the outsider, but the essential pieces required for a self-reliant community are already in place. It will be up to you to establish yourself as an integral part of the community, but it will also save a lot of time. If your family members show up after TSHF, you have every right to bring them into your home without consulting The Leader or The Committee. In the meantime, you can begin growing your gardens, planting your fruit trees, and start prepping to your heart’s content.

The jury is still out as to whether or not a prepper group is truly necessary for survival. Between reaching agreements on money, property, communal decisions, personalities, division of labor — there are just too many pitfalls for me to recommend this for most people.

You might be better off deepening the relationships among your own family and closest friends and finding ways to learn practical skills as a group, such as beekeeping, target shooting, hunting, camping, and gardening. You already have a pretty good idea as to who you can trust, who you definitely do not want to include, and then move forward, confident in the shared history you have together.

Rob Hanus is the author of several books, including, “The Preparedness Capability Checklist” and "Surviving EMP." He is also founder and host of the http://ThePreparednessPodcast.com/.

8 thoughts on “Will a Prepper Group Really Improve your Survival Odds?”