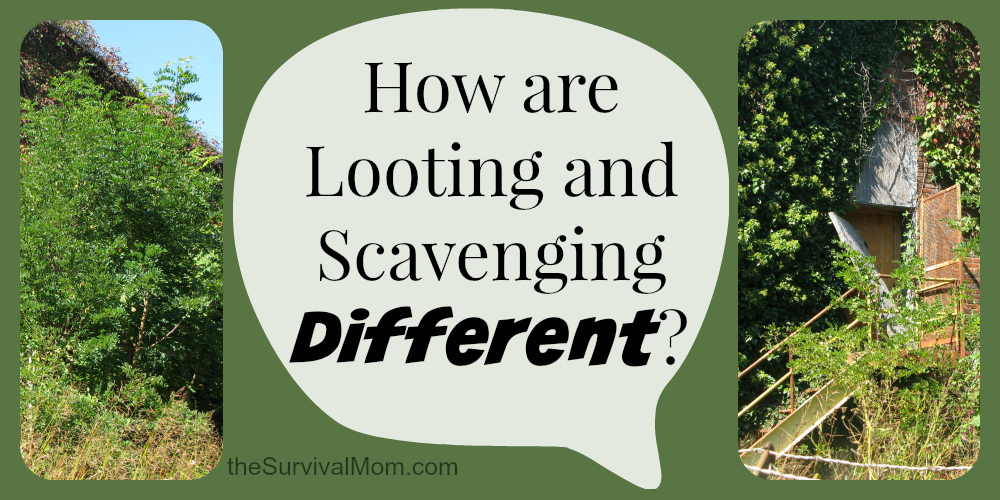 If you read much of any post-apocalyptic fiction, you’ve no doubt witnessed this particular scene played out countless times. The hero of the piece, down to his last three bullets and a scrap of food, comes across a store or gas station that has somehow avoided being burnt to the ground. Venturing inside, to his (and the reader’s) amazement, he finds cases of bottled water, boxes of ammunition, and all manner of tasty snacks. Often, for some reason, there’s a rack of nice trench coats and wouldn’t you know it but they have his size in stock. Thus fortified and nourished, he ventures back into the wastelands to do battle with hordes of mutant zombie bikers.

But wait, does this mean our hero has strayed from the path of all that is honorable and virtuous?  Isn’t he now just another looter?

Well, yes and no. To my way of thinking, all fictional tropes aside, there is a difference between looting and scavenging. Let’s define these by way of example.

What is the difference of looting vs. scavenging?

Looting is smashing a storefront window and making off with a flat screen television when there is a bit of local civil unrest but the world around you is just fine.

Scavenging is entering a business or home that is by all accounts vacant and taking baby formula for your infant daughter when there is no other way for you to feed her and keep her alive because basic societal infrastructure has fallen apart to the point that you have no idea when or where you can reach safety.

The whole idea behind prepping is to have the forethought to stockpile the supplies you’ll need in a crisis. That’s why we do all this stuff, right? But there are any number of reasons why your carefully set aside stored food, water, and other essentials may not be available to you. Perhaps the disaster itself has resulted in your home burning to the ground, or you were forced from your home by a gang of ne’er do wells, despite your best efforts to resist. Maybe you were bugging out and your vehicle broke down or was stolen, leaving you to hoof it the rest of the way.

What do you do?

No matter the cause, you then find yourself standing in front of what used to be a convenience store. It has already been ransacked but perhaps there’s still some goodies left to be found. What do you do?

There are folks who will say, and believe in their very heart of hearts, that to steal anything is wrong, no matter the circumstances. The Eighth Commandment – Thou shall not steal. I’d counter that argument by saying, How do you know God didn’t put that store in your path, specifically in order to give you the supplies you’ll need to live another day? How do you know the owner wouldn’t give them to you, if they were alive and here?

Bear in mind that for the purposes of our discussion here, we’re talking about a complete breakdown of society, a total collapse scenario. In that type of situation, here’s how I look at the looting versus scavenging debate.

If items of value have no clear ownership, such as they’re found in an abandoned or burnt out store, and they will sustain your life, it is scavenging. On the other hand, if the items are clearly owned by someone else and/or they have no use other than just being inherently valuable, it is looting.

Admittedly, there is a ton of gray area here (is it truly abandoned, or are the owners out scavenging for their own needs?), but this is something you should think about and perhaps discuss with the other members of your family or survival group.

A final note: Please do not take the above as in any way encouraging theft or pillaging the countryside. That is not what you should take away from this article (no pun intended). Instead, this is an effort to illustrate my own personal point of view on the looting versus scavenging debate. I cannot and will not suggest breaking the law. But, in the absence of law, each person must make their own decisions on how to best comport themselves.

Please share your views on looting vs scavenging in the comments section.

11 thoughts on “How are Looting and Scavenging Different?”