Skip to content
88 shares
Some of the links in this post may contain affiliate links for your convenience. As an Amazon associate I earn from qualifying purchases. 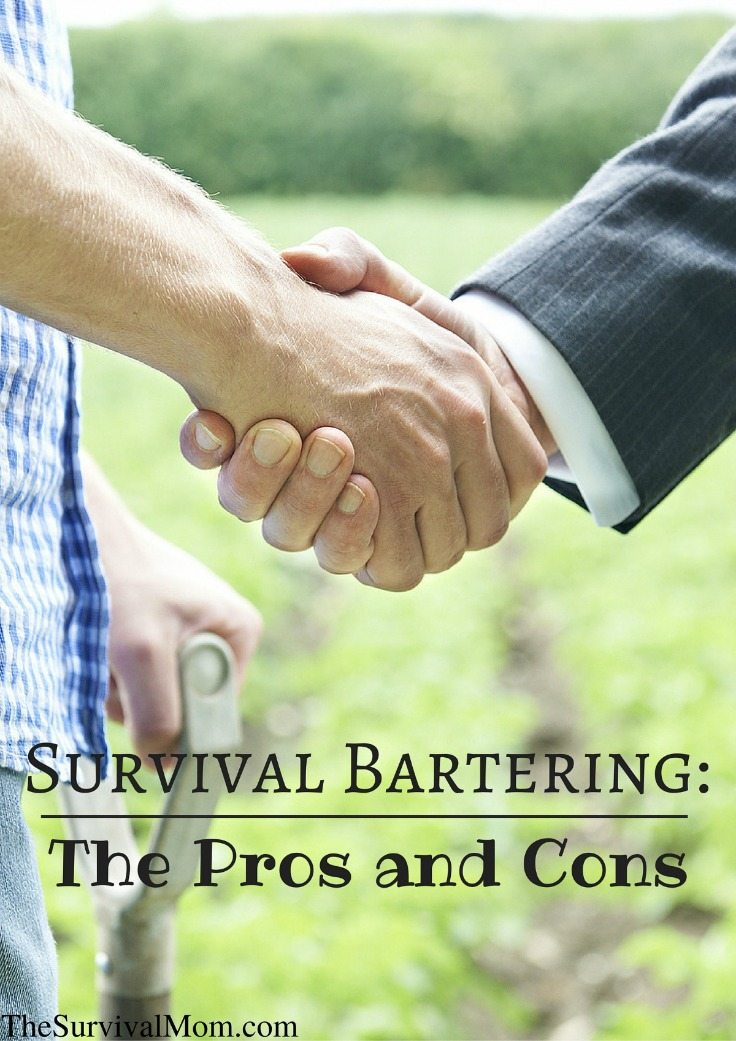 Barter – To trade by exchange of commodities rather than by the use of money.

Much has been written about the use of barter in a post SHTF/TEOTWAWKI* scenario. Barter is presumed to be the norm for conducting common transactions, especially at the beginning of the event (see Chile 1982, Argentina 2001). None of these discussions describe the true difficulties of using barter for containing daily common supplies and needs. This is survival bartering – when your very life may depend on your bartering skills.

Most people think barter is merely “I’ll trade you this for that.” In a pure, simple sense that is so. However, where the rubber meets the road, where theory smacks hard into the face of reality, it isn’t nearly that simple and easy. “Barter” is plainly not the same thing as “money” — just using things like matches, seeds, clean water, rounds of ammunition in place of coins and paper money.

The difference between survival bartering and using money

Like it or not, good or bad, “money”, as we have come to know it, is an effective means of exchange. We exchange money for the product and services we want. “Money” is very effective is because it is very generic. The currency we receive (or pay out) in exchange for products and services can be used to obtain whatever other products and services we want, when we want them (all other things being equal). We do not need to know exactly what we are going to use the money for when we receive it.

We can exchange money for food or clothing or medicine or fuel or transportation or entertainment, or simply hold on to it (save) for another day. “Money” doesn’t get stale or expire or simply go bad after some period of time (ignoring inflation and devaluation for the moment).

By contrast, when you are considering a barter exchange, you must consider at that exact moment what it is you reasonably expect to do with whatever item(s) you are receiving in the exchange. It is highly risky to accept an item whose usefulness to you isn’t clear.

This has obvious draw backs

For example, many web sites and blogs state that .22 ammunition will be the “new currency” in a post SHTF environment. To me, .22 ammo is only good if I have a .22 firearm. If not, I either don’t accept the exchange, or take on additional risk by accepting something I may (or may not) be able re-barter later for something I do need.

Another example: Consider a post-natural disaster scenario like Katrina. Suppose someone comes to you with a brand new big screen TV wanting to trade it for food. In more normal times the TV has value because you can use it right away. But after a disaster it might be weeks or even months before power and cable is restored to your area so what good is a big screen TV?

What exactly to store as barter items?

The answer is simple: It largely doesn’t matter.

There is no real way of know what exactly will be of exchangeable value in a post-SHTF scenario. Some items will probably always have a level of demand such as food, water, medical, defenses, fuel, etc. But those would likely be the last things you want to trade instead of keeping for your own use.

Websites and videos are full of suggestions for this or that  to accumulate for barter such as tobacco, alcohol, ammunition, salt, sugar, batteries, candles, needles and thread, even tooth brushes and dental floss!  In one video I recently saw the guy claimed to have over 50,000 (yes!) nails of all kinds stored for both his own building use and for barter. On another website it was posted that someone had stored so much TP in anticipation of Y2K problems that it took several years after Y2K to use it all up! Imagine the storage space need for all that!

There is also geography to be considered. Some items may have greater value to people in urban areas while people in rural areas put greater value on different items. Someone in a more Northern location will value warm clothes more than someone in Florida.

The reality is you simply cannot turn your home and pantry into an extension of WalMart. No one has enough money and space to allow that. If you are going to collect items with the intention of using them for barter, be sure they are things you can use yourself in your own life should the exchange value not be as significant as you imagined pre-SHTF (not to mention if a SHTF event never occurs at all).

Barter exchange has been around since the start of humanity. There is no reason to think that would change. But bartering for products and services is far different from our present currency exchange systems that requires a very different understanding of how markets work in order to be successful. It should not be thought of as just the same as using dollars or other paper currency. 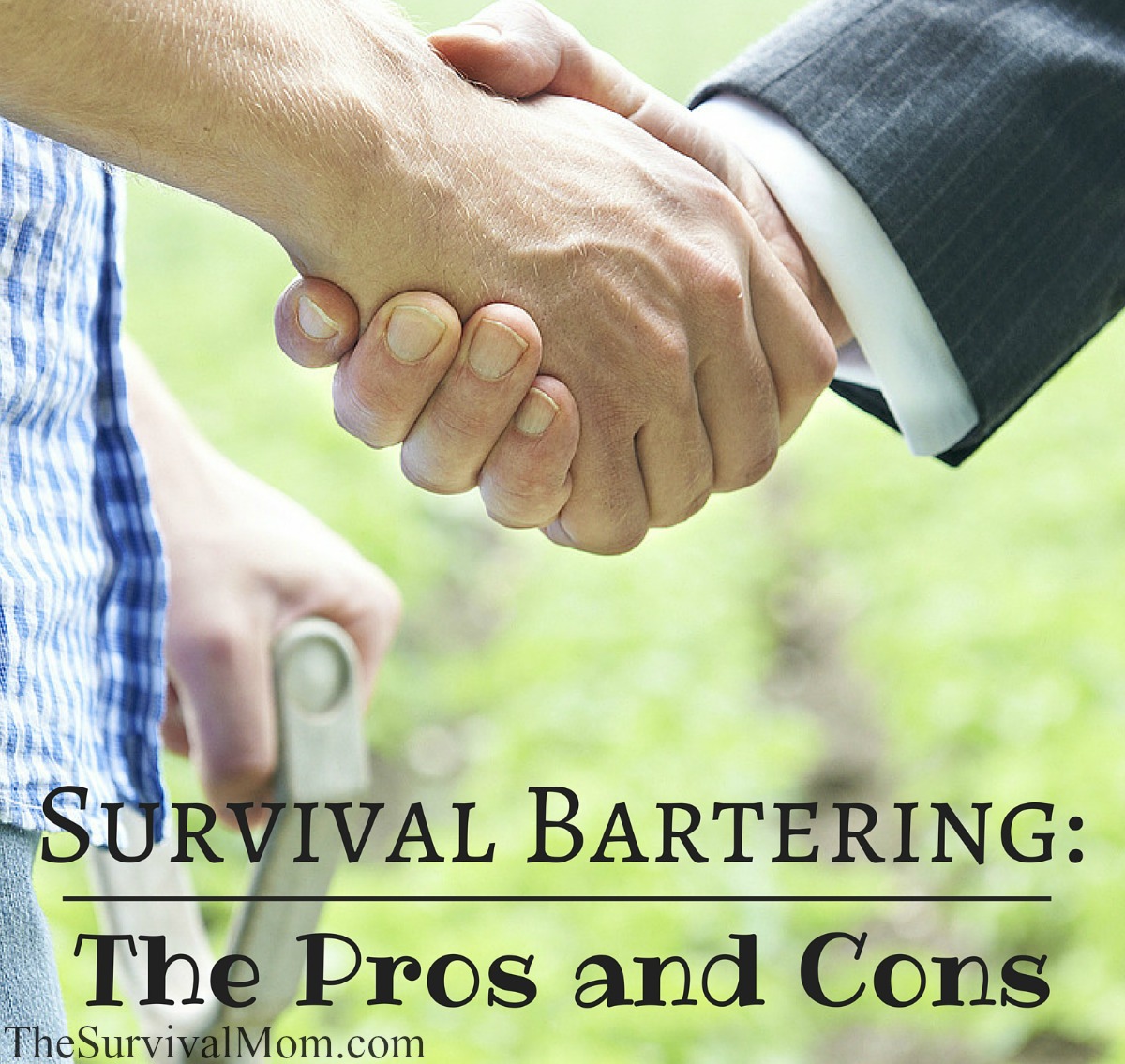 19 thoughts on “Survival Bartering: The Pros and Cons”