Skip to content
683 shares
Some of the links in this post may contain affiliate links for your convenience. As an Amazon associate I earn from qualifying purchases.

I didn’t want to read One Second After by William R. Forstchen.  I knew it was a dismal and depressing book, so I procrastinated. I read rave reviews of the book, I knew the general storyline but hesitated because the book reflects one of my deepest fears — trying to survive longterm without a power grid. 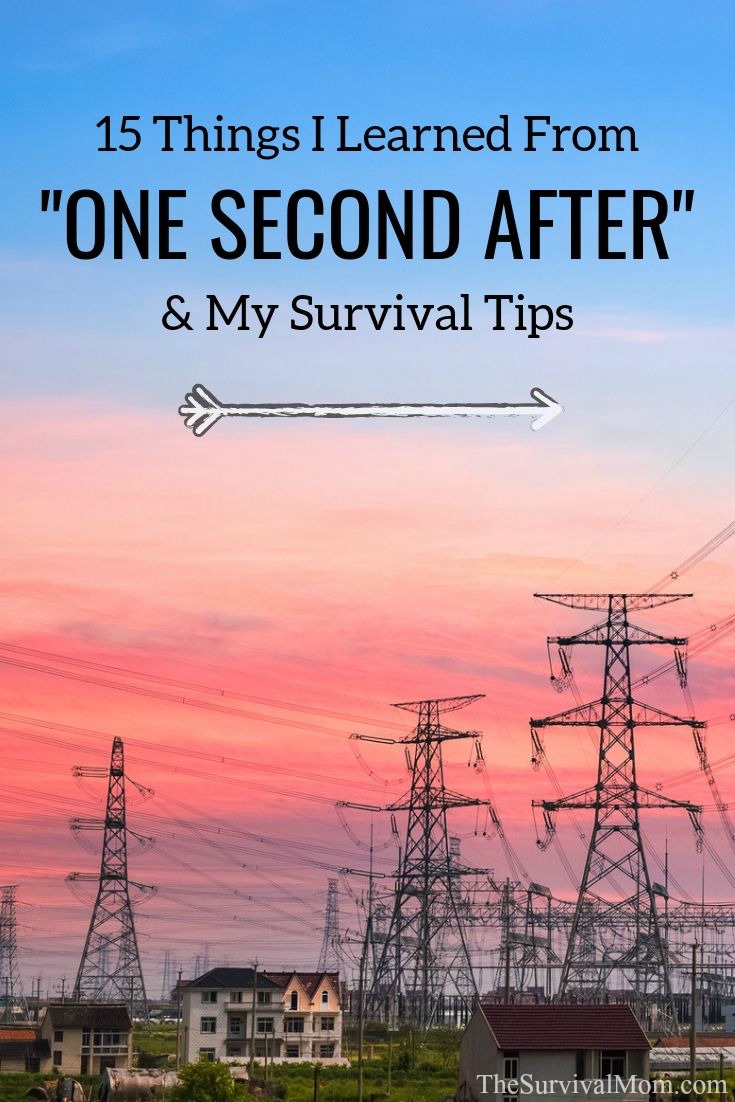 The book describes life in a North Carolina town following an EMP attack. This permanently destroys everything that relies on electronics: cars, airplanes, all communication, medical equipment, etc.  I finally forced myself to read it, and, yes, it was dismal, depressing, and discouraging. I much prefer an economic collapse to a post-EMP world.

One Second After paints a fearful picture

The possibility of a future EMP event has resonated with millions of people in America and around the globe because the results would be devastating. From my book, Survival Mom: How to prepare your family for everyday disasters and worst-case scenarios, I wrote:

“The consequences would be devastating and casualties would, eventually, be in the millions. (Remember, this is the worst-case scenario!) Communities would have little protection of police and fire departments. Prisoners would easily be able to escape, and it wouldn’t take long for hospital generators to run out of fuel and no longer be able to care for patients. Much of the military’s equipment and transportation would be rendered useless to a large degree, unless the machinery has been hardened to be either EMP-resistant or EMP-proof.

Backup generators for electrical plants, including nuclear power plants, and city water and sewage systems would run out of fuel in short order. In fact, there’s a good chance the generators themselves would be of no use because they, too, contain electronic components. We saw something similar happen in Japan after the calamitous earthquake and tsunami in 2011, when fuel for backup generators didn’t arrive in time to prevent a meltdown.

If you happen to be on vacation when an EMP burst happens, you would likely never be able to return home. How does a family of four walk from Disney World to Richmond? It’s likely you would never hear from loved ones again, unless they lived within walking distance and traveling that distance by foot was safe, which is doubtful. That Emergency Broadcasting System that interrupts your favorite TV programs would be just as dead as your cell phone and laptop computer.”

Here are just a few things that stuck with me after reading One Second After and pondering how it would affect me, personally, and ideas for preparing for such an event.

1. Buy an Edsel.  Or not.  Having viable transportation in a SHTF scenario, in this case, an EMP attack, immediately makes one vulnerable to theft and violence.  On the other hand, transportation will save lives. The flip side of that is that any operating vehicle is an easy target for theft or “confiscation” by authorities. Each member of my family now owns a high-quality bicycle with spare tires. I next want to build at least 2 small trailers that we could pull behind the bikes to carry supplies, groceries, etc

2. In a true end of the world scenario, stocking up on food will be viewed as hoarding and susceptible to confiscation.  There will be a definite line between the haves and have-nots, even if the haves only have two more cans of soup than everyone else.

3. Distances that, today, are insignificant, would mean never again seeing loved ones or even your own home if you were stranded far enough away, without transportation of any kind.  Especially if you had to walk through miles of the desert or other difficult terrains. In One Second After, transportation becomes a significant problem.

4. I really don’t want to be one who dies off because of poor health and fitness.  I want to be physically strong enough to walk many miles, carrying supplies, riding a bike for days at a time, etc. Now is the time to take care of health issues and begin to build strength, endurance, and optimal health. You can read more about easy ways to improve your fitness level in this article.

5. Being a refugee places you in so much danger, that hunkering down, no matter where is probably preferable.

6. Young men will be at a premium for hard physical labor and security.  I need to get my son into martial arts and speed up his firearm training! My daughter, too, for that matter!

7. There will be a window of time, initially, in which very few people will realize what has happened.  That is probably true in many different types of crises.  It will be vital to process and accept reality as quickly as possible.

8. There’s probably no such thing as having too much-stored food as long as you rotate it and keep it as safe as possible from the enemies of food storage.

9. If I get injured anywhere on my body, no matter how minor it may seem, take it seriously!  And stock up on a good first aid kit and plenty of hand sanitizer.

11. Stock up on books like the Foxfire series, Mother Earth News, books about pioneer skills, and first aid manuals. We own just about every Backwoods Home anthology, and I’ve assigned articles to my kids as school projects.

12. Check out antique stores and estate sales for all sorts of low-tech, pre-computer age tools and appliances. Make a game out of getting prepared without spending much money.

13. Skills and supplies are equally important. In One Second After, it’s a group of young college kids who knew a bit about foraging who helped out.

14. Contrary to the events written about in Patriots, an EMP event would be the absolute worst-case scenario, hands down.

15. It would be worth my time to research What’s in Your Faraday Cage? A Common Sense Guide to Preparing For an EMP 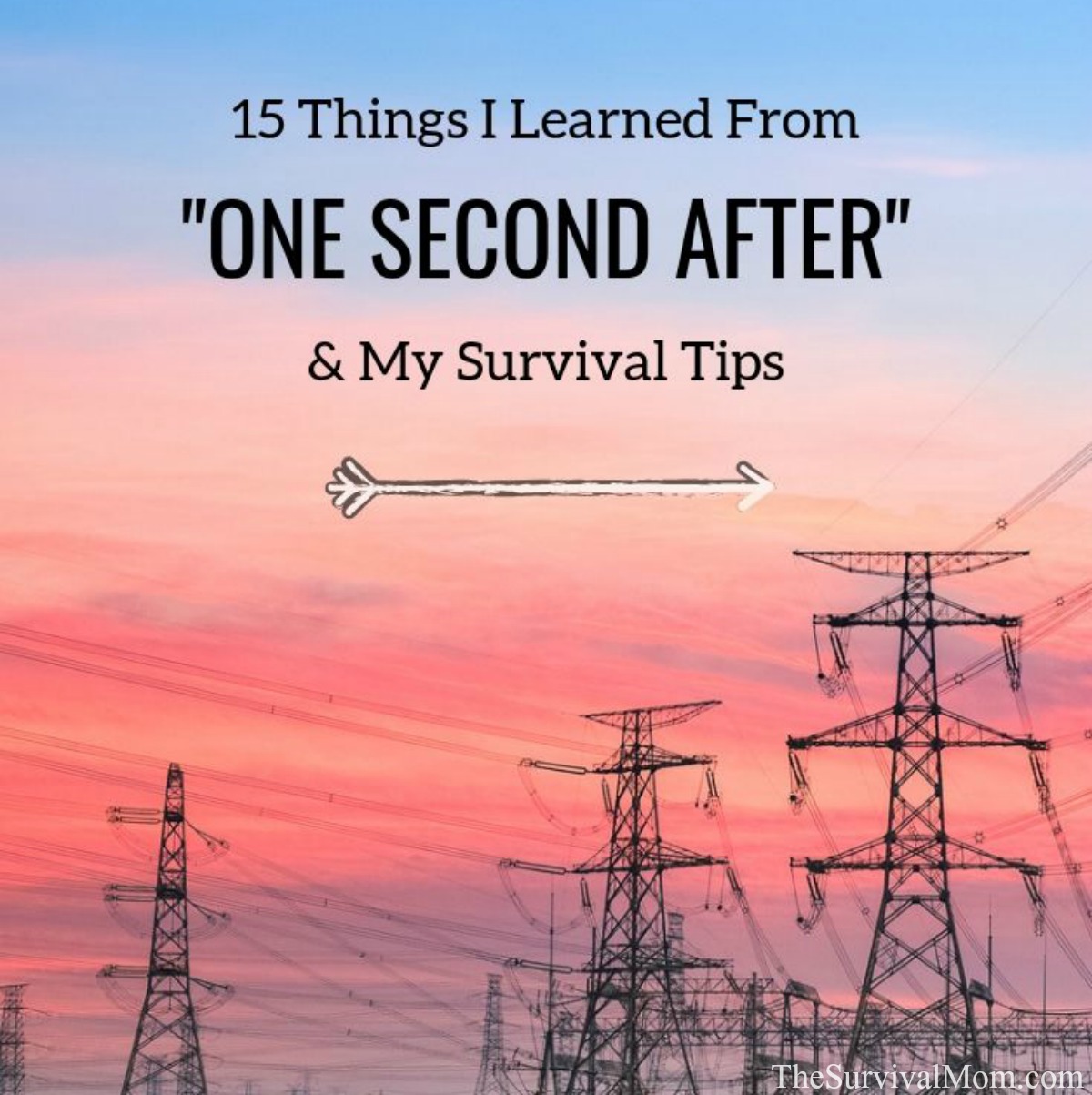