Skip to content
166shares
Some of the links in this post may contain affiliate links for your convenience. As an Amazon associate I earn from qualifying purchases. 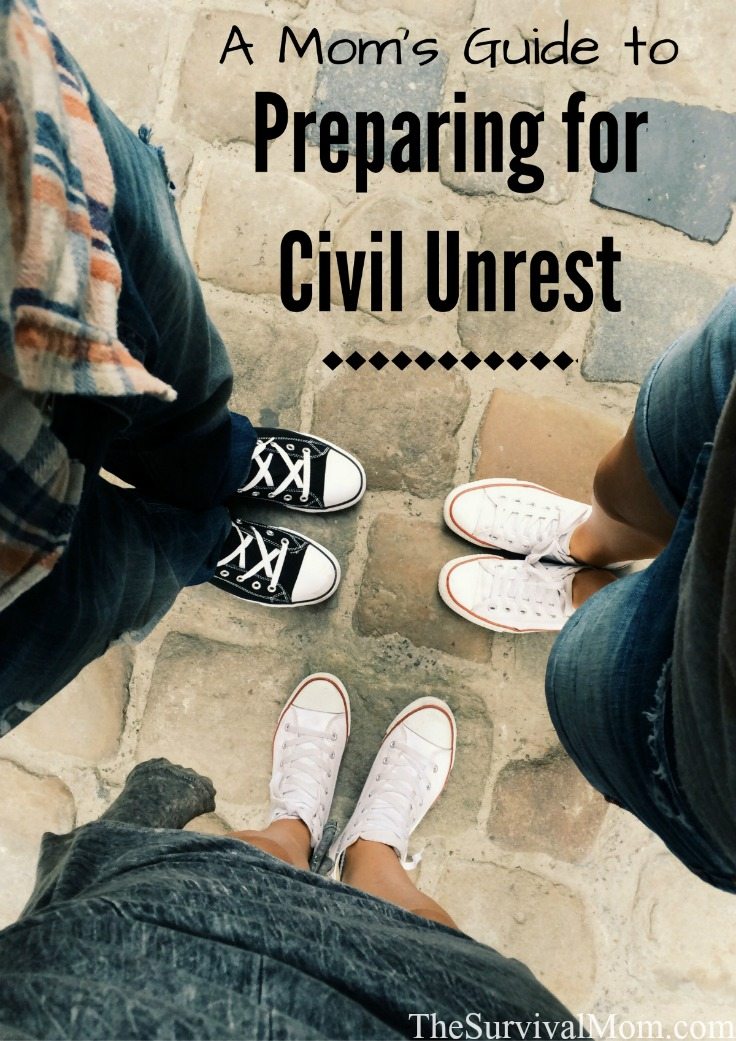 Over the summer of 2016, certain websites forecasted a string of protests around the United States. As it turned out, these protests often lead to riots. In most cases, there is no warning for such events, but this time, we were paying attention to the news and knew where and when many of these protests would take place.

I was chatting with 3 of my friends, also Survival Moms, and we reviewed our situations. Not knowing if any of these protests would turn violent, we needed a guide for preparing for civil unrest. Each of us came up with a game plan.

One of us was going on a family road trip and would be making stops in three of the cities listed as protest sites. Another was home alone with her children with a husband away on a business trip, and I had a long-awaited date night scheduled that was an hour drive away from the children to a city not on the list.

Meanwhile, headlines from around the world reported civil wars, acts of terrorism, political coups, and hyperinflation.  Thanks to this family survival manual, I know how to prepare for civil unrest as well as these other events. Here is a guide for how 3 different moms in 3 very different circumstances prepared for civil unrest. The best thing about this? We are now ready for other emergencies as well.

On a road trip — Anita

Our family was in the middle of a 4,000-mile road trip when the possibility of spreading civil unrest became a concern in the cities on our route. We had prepared for a number of common situations on our trip, such as vehicle breakdown with a family emergency kit like this one, but we hadn’t even thought that we might have to deal with protests or riots along the way. Yet, being prepared for a few other situations served us well when confronted with this additional possibility. For example, we had already been collecting highway maps at rest stations along our way, plus we had an outdated road atlas in the vehicle. A good road atlas is one of the best tools to have for planning alternate routes, even if GPS wasn’t available in remote areas. It would also come in handy if communications were interrupted.

Along with emergency supplies and maps, we also had extra food just in case we weren’t able to stop and eat at restaurants as planned, like if we got into a destination too late. Of course, that would also be helpful if we were stuck somewhere for longer periods than we expected, such as having to shelter in a hotel. In a time of civil unrest, hunkering down for the duration is often the best and safest choice.  We had prepared some self-defense options, too, in the event of attempted mugging. While avoiding civil unrest is always better than fighting back, at least we weren’t completely defenseless if we did find ourselves in a scary mob situation. We also considered the possibility of unwittingly driving into a mob scene and how we might handle that situation.

We weren’t finished with our preparing for civil unrest There were a few more steps we decided to take:

Some of the lessons I took away from this experience are if you’re prepared for one situation, even if you can’t think of every possibility, you are still better off than doing nothing. Flexibility is key. And really you can’t stay home for the rest of your life. Even as a survival mom you still need to plan vacations and times away from home and out of your comfort zone. Whatever happens, just deal with it when it does.

Home alone with the kids — Monica

When rumors of protests in our city began to circulate, my husband was working 9 ½ hours away and wasn’t due to get home for another three days. News reports of other protests having gone terribly wrong added to my uneasiness. Being home alone meant I needed to take full responsibility for our well-being.

As a mom, my mind immediately went to the mundane, yet important details of maintaining a house in the midst of a chaotic event. My washer had been out of commission for a while, so the first thing I did was go to the laundromat to get all the clothes washed at once. Next was making sure the car was filled with gas, and that I had all the basic, perishable groceries needed to get us through for a week and a half. It was a good feeling when I got home that day and knew we could be at home for many days with no need to go out.

This is actually key when you’re expecting an event that might make it more dangerous to leave your home than to stay put. Make sure you have all of life’s essentials right there with you — think of things like baby food, diapers, toilet paper, prescription medications, over the counter meds (here’s a list of suggested OTC meds to have on hand), and so on. The type of things that, when you run out, you need to quickly replenish. That’s what you stock up on!

I called my husband to make sure we were still on the same page as to decisions about when we stay at home, when to pack up the child and animals and head to friends on the edge of the city, and at what point we go to rural acquaintances. If we were unable to communicate, he would know where to find us. I planned several different routes to get to each location and made sure an atlas was still in the car. This is where, again, having very good maps and a GPS can help. A survival manual that focuses only on emergency evacuations, like this one, is a must.

Then I made popcorn and spend the rest of the evening watching Netflix shows.

I learned a few things from this experience:

It sometimes takes a miracle to have a successful date night out as parents. The schedules of every person involved — wife, husband, kids, babysitter —  all have to align like the planets in the night sky. We finally had one of those nights planned and to top it off, it coincided with a fun event in a nearby city. We were very excited.

Then we saw the news about the possible protests and riots. The city we were planning to go to wasn’t on the list, but I glanced through news sites, Twitter, and Craigslist the two days prior and day of to make sure other people weren’t planning something there. The event we were going to was on the far side of the city closest to us, so we wouldn’t have to drive through downtown.

Just in case we found ourselves unable to reach our destination or unable to get back home quickly, we made sure to have water, some food, good walking shoes, fully charged cell phones, a full tank of gas and an atlas (in case we needed to take some back roads home). We discussed how to effectively use our concealed carry licenses, although that was something neither of us relished. Doing all of this gave us peace of mind and we decided to go ahead and go on our date. We were prepared, and we ended up having fun.

The overall lessons that were reinforced by preparing for this possible event were:

Anything can happen at any time – with or without warning.  But that’s what being a survival mom is all about – being prepared for anything, wherever you are, and with whatever you have. What unusual situations are you prepared for? 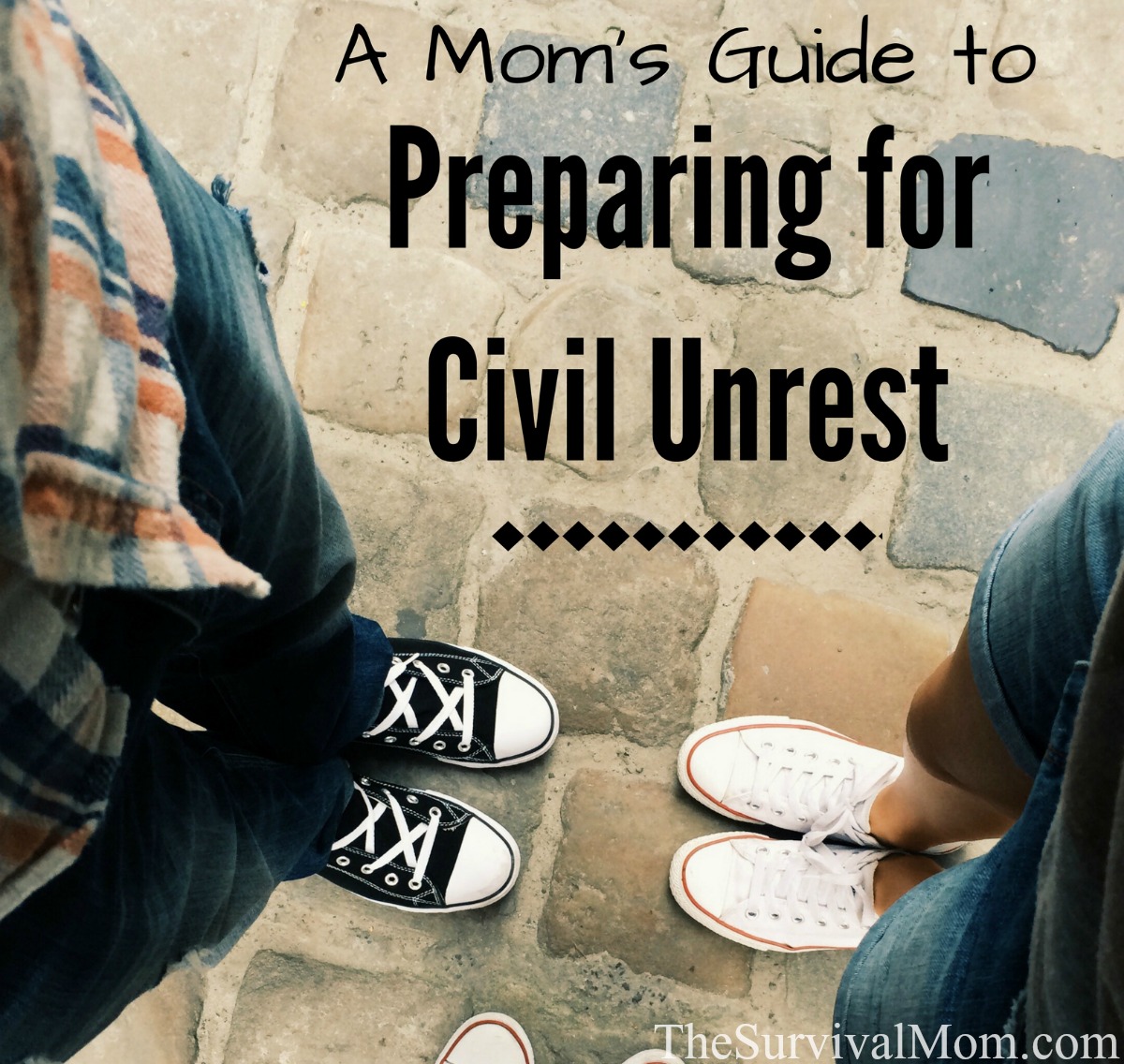