Skip to content
4 shares
Some of the links in this post may contain affiliate links for your convenience. As an Amazon associate I earn from qualifying purchases. 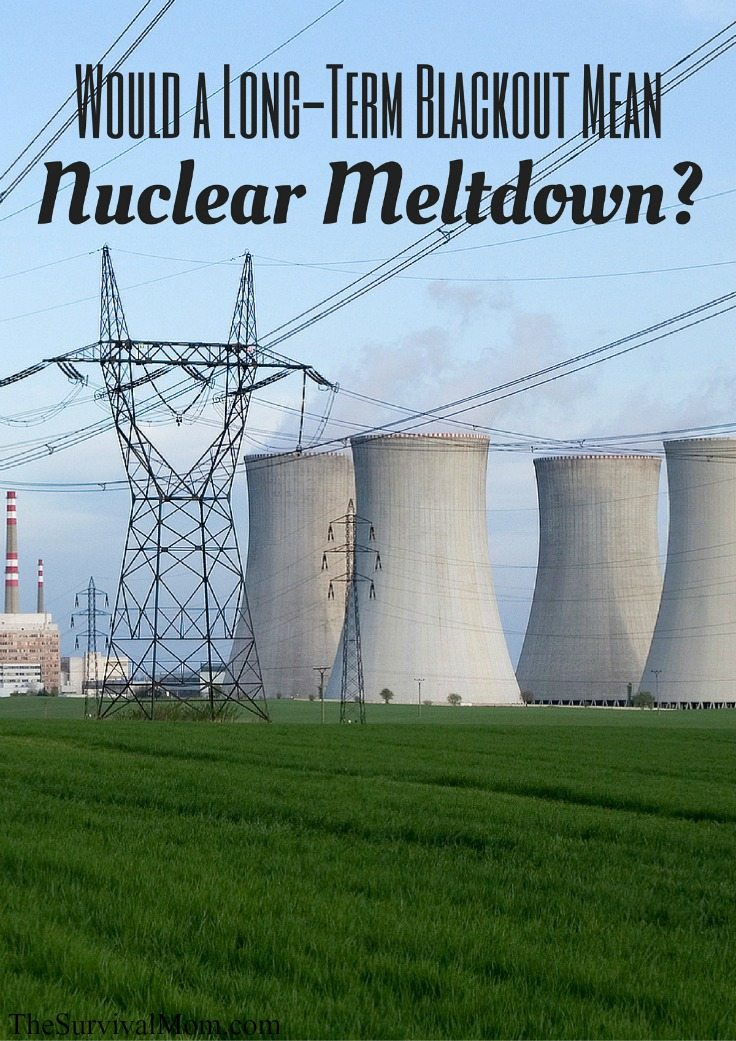 According to the Nuclear Regulatory Commission, there are 61 active commercial nuclear plants spread across the United States. A question on the minds of many is, what would happen to those plants if the nation experienced a widespread, long-term blackout? Would there be a nuclear meltdown? Let me start by saying that there is a quite a bit of misinformation on the web about this subject, so my advice is to be careful about what you choose to believe.

Many of you may know that I have a background in science and engineering (Ph.D. in Electrical Engineering), so I believed that if I could talk with a knowledgeable person working in the nuclear power industry, I could get to the bottom of this question. To find answers, I consulted Jim Hopson, the Manager of Public Relations at the Tennessee Valley Authority. As readers may point out, it was in Mr. Hopson’s interest to assure me that nuclear plants are safe, but to be fair, I found him to be forthright about the industry’s safeguards and vulnerabilities.

Probably the best place to start is with a basic discussion of how a nuclear power plant operates. There are two types of reactors in the U.S., boiling water reactors (BWRs) and pressurized water reactors (PWRs). For purposes of our discussion, the differences in their operation aren’t terribly important. Nuclear reactors use an atomic process called fission to generate heat. The heat is then used to create steam that turns large turbines to generate electricity. The steam is later condensed and returned in a closed-loop process within the reactor system.

The nuclear reaction itself is beyond the scope of this brief write up (and my expertise), but the gist is that an energetic neutron is absorbed by a uranium-235 nucleus, briefly turning it into a uranium-236 nucleus. The uranium-236 then splits into lighter elements, releasing a large amount of energy. The physical system inside the reactor consists of tens of thousands of nuclear fuel rods placed into a water bath. The rods are essentially long metal tubes filled with ceramic nuclear pellets that are bundled together into larger assemblies.

Trivia bit: A nuclear fuel pellet is about the size of a pencil eraser but equivalent in energy to one ton of coal.

The risks of nuclear power are many, but two stand above the rest. The first is that the fuel assemblies in the reactor might overheat. That would only occur if the fission process became uncontrolled or if the cooling system failed.

Should overheating occur, the fuel rods’ zirconium cladding and nuclear materials could both melt, resulting in a nuclear sludge akin to molten lava. That slag would be so hot that it might melt through the bottom of the reinforced reactor. Eventually, it would cool enough to harden, but not before it had spewed nuclear contaminants into the air. Melting zirconium also releases hydrogen, which could lead to an explosion that might actually expel the nuclear material into the surrounding area—think Fukushima.

The good news is that nuclear fission can be stopped in under one second through the insertion of control rods. Those control rods are automatically inserted near the fuel rods either by a hydraulic system or through the use of an electromagnetic dead man switch that activates when power is removed. That means that when the electrical grid goes down or an emergency shutdown is initiated, fission would automatically stop one second later.

That’s a good thing, but it doesn’t make the reactor inherently safe. Even without fission, the fuel rod assemblies remain incredibly hot, perhaps a thousand degrees C. If they were not actively cooled, pressure and temperatures would build in the reactor until something breaks—not good. After three days of active cooling, however, the reactor would be thermally cool enough to open, should it be deemed necessary to remove the fuel rod assemblies.

The second major risk has to do with cooling of the spent fuel rod assemblies. Nuclear fuel rod assemblies have a usable life on the order of 54-72 months (depending on reactor type). Every 18-24 months, the reactor is brought down and serviced. While it is down, the fuel rod assemblies are removed, and 1/3 of them are replaced with fresh assemblies. Think of this like rotating cans of food in your emergency pantry.

In the U.S., fuel rods are not refurbished like in other countries. Instead, they are carefully stored in giant pools of water laced with boric acid—imagine a swimming pool at your local YMCA that is 75-feet deep. Those spent fuel rod assemblies are still incredibly radioactive, and they continue to generate heat. Water in the pool must therefore be circulated to keep them cool.

How long must the fuel rods be cooled? According to Mr. Hopson, the answer is 5-7 years. After that, the rods are cool enough to be removed and stored in reinforced concrete casks. Even then, the rods continue to be radioactive, but their heat output can be passively managed.

Nuclear plants obviously require electricity to operate their cooling pumps, not to mention their control systems. That power is normally tapped off of the electricity that the reactor generates. If the plant is offline, the power is provided by the electrical grid. But what happens when the grid itself goes down? The short answer is that large on-site diesel generators automatically activate to provide electricity. And if those should fail, portable diesel generators, which are also on-site, can be connected. Recent standardization has also ensured that generators can be swapped between plants without the need to retrofit connectors.

There are also a couple of additional emergency systems that can be used specifically to cool the reactor. These include the turbine-driven-auxiliary-feedwater pump, which uses steam generated by the reactor to power a cooling turbine. The pump requires an operator, but it runs completely without electricity. This system, however, is meant only for emergency cooling of the reactor during those critical first few days when the fuel rod assemblies are being brought down in temperature, not for long-term cooling.

And finally, in the worst case, most plants have a method of bringing in river or ocean water to flood the reactor. This typically damages the cooling system, but again, it helps to cool and cover the reactor core should all else fail. Unlike in other countries, permission from the federal government is not required to flood the reactor.

With backup systems to the backup systems, it would seem that there’s nothing to worry about, right? Under all but the direst of circumstances, I think that assessment is correct. However, one could imagine a scenario in which the grid was lost and the diesel generators ran out of fuel.

Speaking of fuel, how much is actually stored onsite? It depends on the plant, but at the Watts Bar Nuclear Plant, for example, there is enough fuel to run the emergency diesel generators for at least 42 days. I say at least because it would depend on exactly what was being powered.

Once the reactor was cooled down, a much smaller system, known as the Residual Heat Removal System, would be all that was required to keep the fuel assemblies cool, both in the reactor and the spent fuel rods pool. The generators and onsite fuel supply could power that smaller cooling system for significantly longer than if they were powering the larger reactor cooling system. Even if we assumed a worst case of 42 days, it’s hard to imagine a scenario in which that would not be enough time to bring in additional fuel either by land, water, or air. Nonetheless, let’s push the question a little further. What would happen in the unlikely event that the diesel fuel was exhausted?

Even with the reactor having been successfully cooled, the biggest risk would continue to be overheating of the fuel rod assemblies, both in the reactor and the spent fuel rods pool. Without circulation, the heat from the fuel rod assemblies could boil the surrounding water, resulting in steam. In turn, the water levels would drop, ultimately exposing the fuel rods to air. Once exposed to air, their temperatures would rise but not to the levels that would melt the zirconium cladding.

Thankfully, that means that meltdown would not occur. The steam might well carry radioactive contaminants into the air, but there would be no release of hydrogen and, thus, no subsequent explosions. The situation would certainly be dangerous to surrounding communities, but it wouldn’t be the nuclear Armageddon that many people worry about.

The bottom line is that in the event of a long-duration blackout, several things would need to occur for a nuclear meltdown.

First, fission would need to be halted by the insertion of control rods, a process that takes less than one second. Next, the reactor would need to be cooled for at least three days using the large diesel engines to provide electrical power. After that, the fuel rods would be cool enough that the reactor could be opened, and the plant’s Residual Heat Removal System could be used to provide cooling. That smaller system would need operate for 5-7 years to ensure that the fuel rod assemblies, both in the reactor and in the spent fuel rods pool, didn’t overheat. Only then could the fuel rod assemblies be moved to concrete casks for dry storage and final dispositioning.

During those 5-7 years, electricity in one form or another would be required. If it was not maintained, radioactive contamination could be released into the air, but the temperatures of the fuel rods would not be high enough to cause a complete meltdown or the dangerous release of hydrogen.

The point of this article wasn’t to convince anyone that nuclear power generation is safe or that a nuclear meltdown could never happen. I would argue that history has already proven that it comes with some very serious risks. Rather, it was to discuss the impact of a long-duration blackout. Specifically, it focused on the safeguards that are currently in place, and more importantly, discussed the magnitude of the catastrophe that might result if we allowed those safeguards to fail.

Guest post by Arthur T. Bradley, Ph.D., author of the Handbook to Practical Disaster Preparedness for the Family, 3rd Edition

, Prepper’s Instruction Manual: 50 Steps to Prepare for any Disaster

, and the Frontier Justice (The Survivalist Book 1) 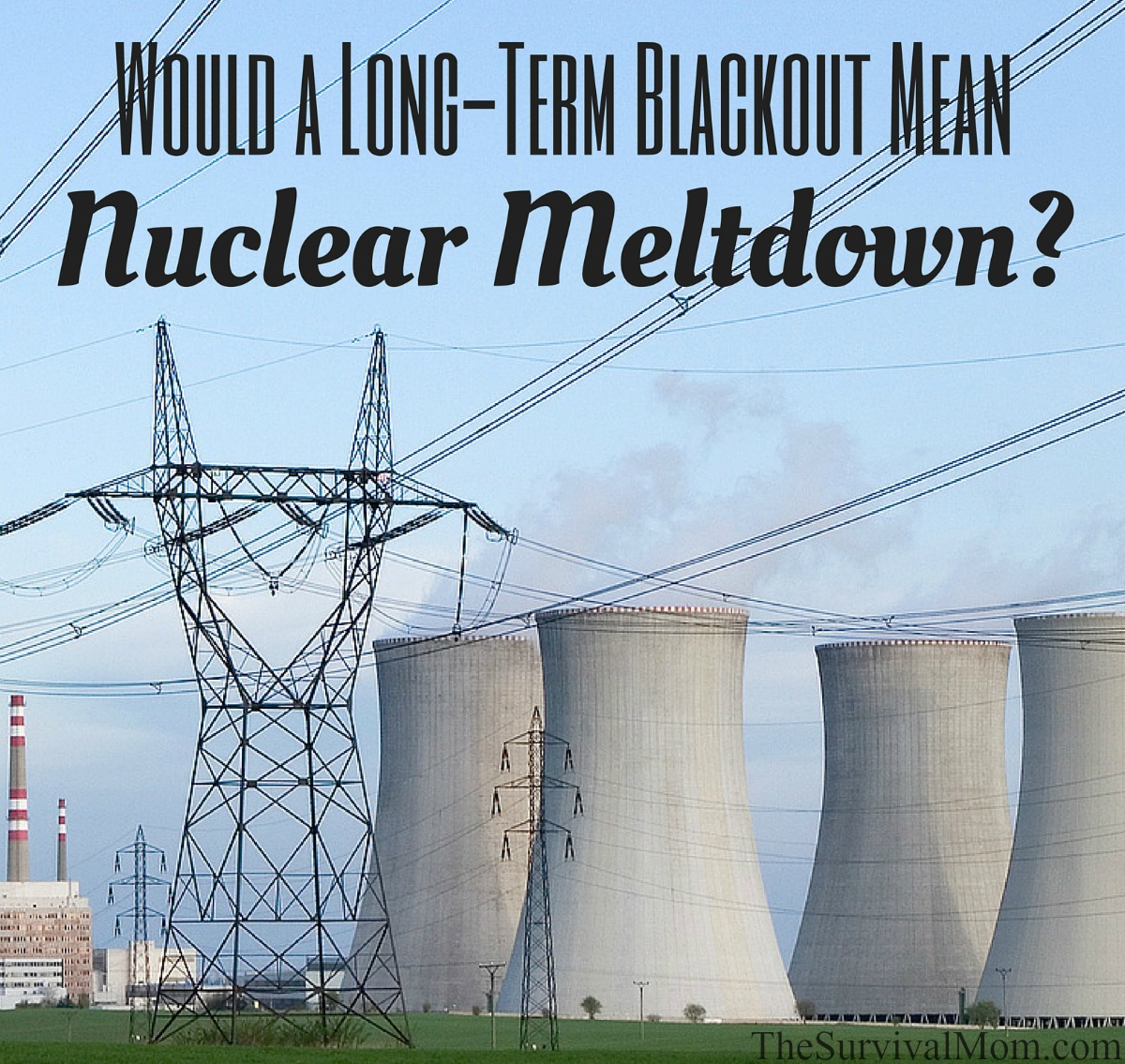 10 thoughts on “Would a Long-Term Blackout Mean Nuclear Meltdown?”