Skip to content
211 shares
Some of the links in this post may contain affiliate links for your convenience. As an Amazon associate I earn from qualifying purchases.

Have you ever wondered how your current home location ranks in terms of survive-ability in case of a major catastrophe? When you consider the possibility of The End Of The World As We Know It (TEOTWAWKI), how survival-friendly is your location? Did the prepper craze of the early 2000s leave you feeling unsettled and thinking about moving to a rural location? 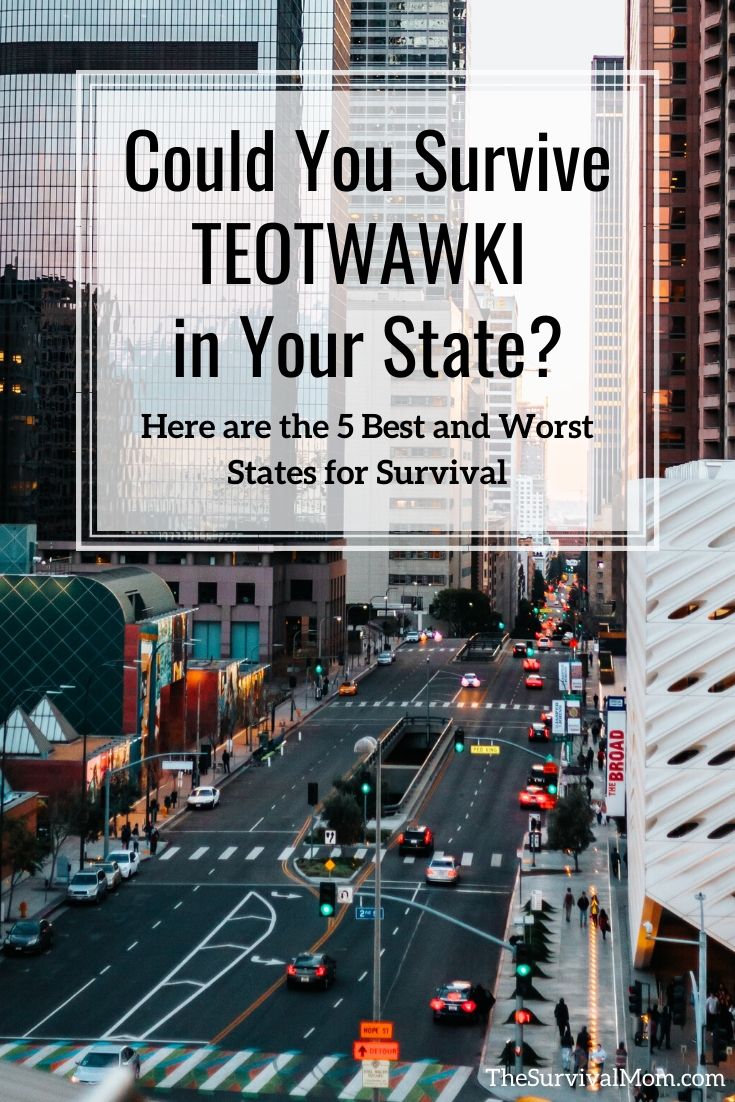 Joel Skousen’s book Strategic Relocation has some of the answers to those questions and may be able to help you assess the security of your current location. His book is fascinating reading and a bit controversial, but after living in some of the states he reviews, I’d say that portion of the book, at least, is pretty accurate.

He bases his assessments on a number of factors:

I always keep in mind that no location is perfect, and no matter where you live, there’s such a thing as dumb luck or the hand of God. Just ask the people in Joplin, Missouri, whose homes remained completely intact while those of their neighbors were devastated.

Just because a family lives in one of the Top 5 states doesn’t mean they can kick back, relax, and ignore signs of coming turmoil or potential natural disasters. Likewise, residents of one of the Bottom 5 states may be well prepared enough to mitigate some of the disadvantages.

Take a look at the five states Skousen regards as the best for survival. Keep in mind that these observations and opinions come from his book published in 2011; much has changed since then. (By the way, I think his book is fascinating and worth a read, even if it is a bit outdated.)

#1  Utah – Low population density, except in the Salt Lake City area. Utah has a  below-average cost of living and good food production potential, although irrigation is usually required. It has good water quality, average tax rates, and low property taxes. Its crime rate and government corruption levels are moderate, and it’s rated as a very friendly-gun state. Homeschooling in Utah is easy as it has no homeschooling regulations.  There are only a few military targets.  Overall, there are a lot of areas that are very suitable for survival retreats and numerous small towns that are also good locations. The 50% of the Mormon (LDS) population means that more people here are preparedness-minded than anywhere else in the country. Survival-type products are easy to find, and many LDS resources are open to non-members.

#2  Idaho – Idaho offers a low cost of living and low population density. The food production potential is average, with irrigation being required in most parts of the state. There is good water quality, and low levels of pollution, but higher than average taxes. You’ll find a low crime rate here with very friendly gun laws.  Homeschoolers won’t have to deal with any regulations, and overall the state has a very high Personal Liberty rating. Many people here are preparedness-minded, the state is more conservative than most, and there are numerous locations for good survival retreats or residential areas suitable for survival-minded families.

#3  Montana – A classic survivalist state with very low population density. It has a moderate cost of living, excellent water quality, low taxes, and a moderate crime rate. It ranks high in gun liberty and has very low homeschooling regulations. However, near Great Falls, there is the largest Minuteman missile base in the country, which makes it a primary target for hundreds of warheads. Stay away from that area, and you have a state that rates high in personal freedom and has plenty of room to spread out and explore.

#4  Washington — As long as you avoid the Seattle area and give it a very wide berth, there’s a lot about the state to make it very survivable. As a state, it has an average population density and cost of living index. Most of the state has a nice growing season of 150-210 days per year, and the water quality is good. It has moderately good gun laws but more homeschooling regulation than many other states. One nice feature is that it has no income tax.

#5  Colorado – In his book, Joel Skousen gives Colorado 4 stars despite some significant, primary military targets near Denver and Colorado Springs. Outside Denver, there’s a below-average population density, the average cost of living in the state, and depending on where you live, you have either a below-average growing season or a very nice one with 180 days or so. Colorado offers below-average taxes and a low crime rate. Denver has restrictive gun laws, but other parts of the state are gun-friendly. Moving forward, you’ll see Mr. Skousen downgrading Colorado to a much lower ranking based on more current events.

And now, for the states that have the worst rankings.

#50  Hawaii – Great vacation destination but a horrible place to be if things ever hit the fan. As an island, most necessities must be shipped, including fuel and food. The cost of living is very high, the soil is fairly poor for general farming, and depending on which side of an island you live on, you could get too much or too little rainfall. Hawaii is the 5th highest in state and property taxes and has a very high level of corruption in government and the police department. There are strict gun laws, and it’s home to several primary military targets. Additionally, there are plenty of racial tensions here.  If tourism should ever die, the entire state would collapse in just about every sense of the word.

#49  Florida – High population density overall.  Florida averages 45 tornadoes a year, plus it gets a fair share of hurricanes. Food production potential is good, but only for a few specific crops, not for general farming. It has higher than average water pollution, and some areas have high air pollution.  Additionally, it has a very high crime rate. Skousen describes it as one big trap zone. There are multiple military targets, and some areas will be impossible to evacuate without a fast boat. Without electricity, the climate is very difficult to live in.

#48  Rhode Island – Rhode Island has a very high population density, high cost of living, and restrictive laws regarding personal liberty. For example, strict building permits are required, there’s highly centralized planning,  restrictive gun laws with a 7-day waiting period for making a purchase, and homeschooling is highly regulated. Because the state is so small, there really is nowhere safe to hunker down or use as a survival location. There are numerous lakes and creeks to cross, making evacuations potentially dangerous or impossible. Rhode Island also has heavy traffic and high taxes.

#47  Massachusetts – Very high population density and the 14th worst traffic in the country.  Massachusetts has a high cost of living, a very high violent crime rate, and restrictive gun laws. Homeschooling is highly regulated, and there are high levels of corruption at the state and local levels.

#46  New Jersey – New Jersey has a high population density, very high cost of living, and heavy-handed state and local governments. Building permits are required for everything. Skousen reports, “Some localities even require a permit to replace kitchen appliances.”  There are red-light cameras, high levels of surface water pollution, heavy traffic problems, and the highest tax burden of any state.  Additionally, there is very high corruption in government and stringent gun laws.

Are you ready to pack up and move from your state?

Before putting up that For Sale sign, assess your circumstances and, very importantly, your connections. Moving to a so-called “survival friendly” state will mean getting to know neighbors all over again and, likely, being far away from your closest friends and family members. When I think of moving to the ideal survival retreat, I know my kids would grow up not knowing their cousins, and I would watch my parents grow old without having me nearby to lend support. No matter where you live, there are trade-offs.

In 2013, my family moved from Arizona to Texas. Not for “survival” but for my husband’s job. To be honest, I really underestimated how difficult such a move would be, from getting our house ready to sell, the whole selling process, packing up, moving with five pets, and then deciding exactly where we wanted to buy. You can read the full story of my move at this link.

The Top 5 or Bottom 5 may not tell the whole story. Do your own research and consult multiple sources if you’re thinking of either moving or establishing a location as a survival retreat.

Stay away from these dangerous metro areas: (partial list)

1. Washington DC /and related bases (major command and control for the President)

Skousen’s recommendations for the most economical states to live in: (partial list)

Get the full lists and more insights on Joel Skousen’s “Strategic Relocation” page.

READ MORE: Will TEOTWAWKI be what you imagine? Compare your expectations to this list of inconvenient truths about The End of the World as We Know It. 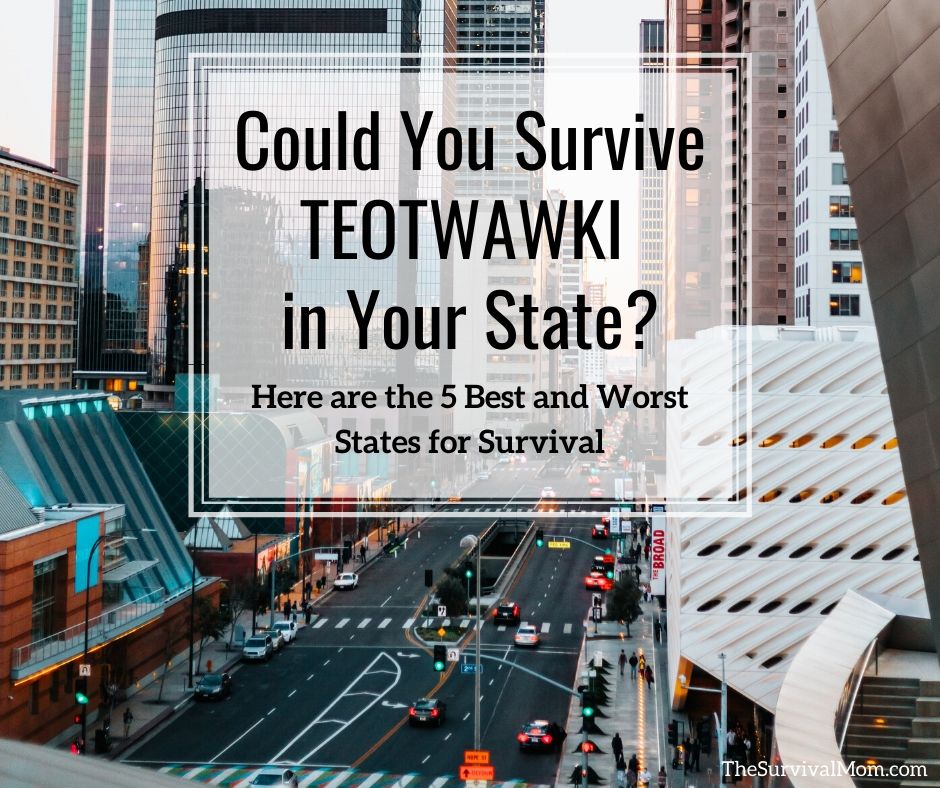 117 thoughts on “Could You Survive TEOTWAWKI in Your State? Here are the 5 Best and Worst States for Survival”