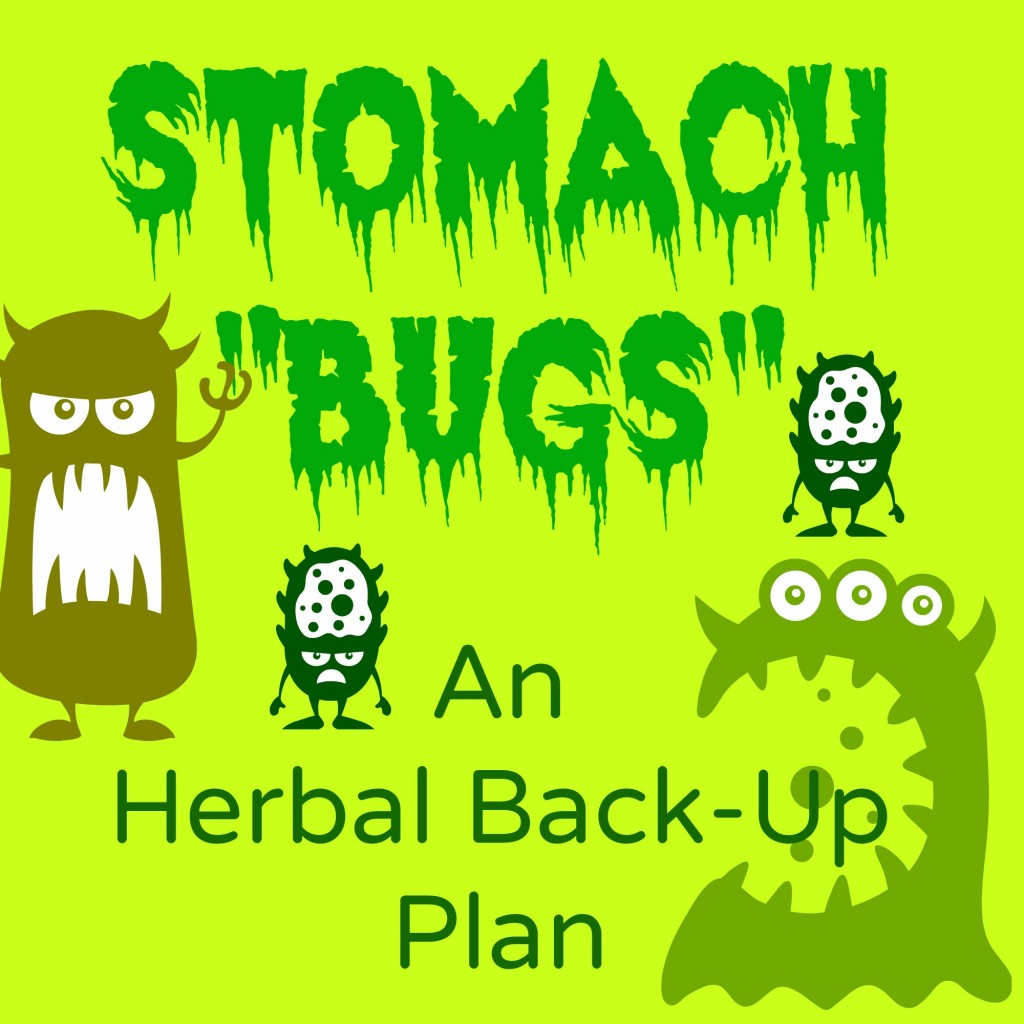 These tips may come in handy someday soon! Click here to pin!

So perhaps it’s that time of year, and stomach “bugs” are starting to make the rounds at school and work. Or, perhaps you’ve had a run in with a mild bout of food poisoning. There are plenty of OTC drugs available (Imodium, Pepto and the like), but let’s take a look at some alternatives in the event that OTC meds aren’t available for whatever reason.

There are many other herbs with a history of use for digestive support, but these five are especially easy to grow and identify, so I think they are particularly well suited for emergency preparedness scenarios where OTCs might be in short supply or unavailable. Combined with a commonsense care approach focusing on food and fluid intake, they should provide a decent family or community back-up plan.

First, regardless of what else is available, food and fluid are going to be key in keeping the situation from getting out of hand. Fluid loss from diarrhea and vomiting are especially dangerous for children and the elderly, so pay close attention to what is going in, not just what’s coming out.

Bland, soft foods are important so that the digestive system isn’t stressed further, so stay away from offering spicy or greasy foods. Make sure the foods still have nutritional value. Sugary gelatin and pudding really aren’t the best idea here. Some nutrient dense but bland foods include oatmeal and other whole grain porridge, meat and veggie broths, yogurt, and plain fruit and vegetables that are cooked until soft.

Maintaining electrolyte and fluid balance is even more important.  Make sure they drink plenty of water, diluted fruit juice, and herbal teas. Stay away from sugary drinks and anything with caffeine. An electrolyte formula can be used if the fluid loss is especially severe, and is a good idea for children and the elderly.

If you don’t have access to Pedialyte, the World Health Organization recommends ORS (Oral Rehydrating Solution) which is 5 liters of water, 6 level teaspoons of sugar, and ½ level tsp of salt. The solution is good for 24hrs, after that you will need to make a fresh batch. It can be used by alternating with other fluids.

Beyond that, these five herbs have a tradition of use for digestive upset. I’ve included some information on the growth habits of the plants as well as how they are used, and hope that will be useful for my readers interested in growing their own herbs and being less reliant on outsourcing their dried herbs.

This plant is soothing for the stomach and the throat when there is a lot of vomiting and the stomach acid leaves the throat feeling raw. Marshmallow has a high level of mucilage, which makes the tea take on a distinctive “slippery” texture.

The best way to use marshmallow as a tea is actually by allowing the dried root to soak in room temperature or cool water- not brewing it with hot water as is common with most herbs. Leave it overnight for best results, but it can be used anytime after it has soaked for thirty minutes.

Marshmallow is traditionally understood to coat and soothe inflamed tissues of the digestive tract. It is one of my go-to herbs for the aftermath of food poisoning. Marshmallow is native to Africa but it is not a fussy plant and is usually happy to grow in rich garden soil as long as it gets enough water. It is a perennial that is hardy across most zones and prefers consistently moist soil.

The root of this herb can help settle a stomach, and is traditionally used for nausea and improving digestion and absorption of nutrients.

Tea from fresh ginger root is best, but dried will also help. Some health food stores carry candied ginger root, which is convenient and palatable to most people. I enjoy adding it to trail mix, too, so I usually keep plenty on hand.

Ginger is a tropical plant, so for most parts of the US it will do best if grown in pots that can be brought inside during winter and placed in a sunny window.

The bark of slippery elm is traditionally used as a thin porridge – a gruel – or added to porridge such as oatmeal. Like marshmallow, slippery elm is helpful for coating the stomach. The main difference between the two is that slippery elm is considered to be more nutritive and was used during convalescence as a food. It was often turned to when the sick person couldn’t seem to keep any food down.

Some good flavorings for a gruel that uses slippery elm are ginger or cinnamon, for an extra boost of stomach settling goodness, and honey as a sweetener. To make a slippery elm porridge, start with a bowl of oatmeal or other whole grains, and stir in a tablespoon of slippery elm powder.

To make a slippery elm gruel, place a tablespoon of slippery elm powder into a bowl, and add one cup of hot water. Add cinnamon or ginger, if desired, and allow to cool to a safe temperature for drinking.  It will thicken as it stands, so if it becomes thicker than you want, add more water.

Sometimes, herbalists mix honey and slippery elm powder to form a dough, and then roll the dough into bite sized pieces This can be eaten a few pieces at a time, rather than making a gruel.

Native to central, eastern and southern US and parts of Canada, this tree is an excellent addition to the landscape as a shade tree. Harvesting is a little trickier for trees than for other herbs. It is usually done in the spring, when the rising sap makes the bark easier to peel from the tree. It’s best to learn how to do this from someone who has had experience. “Girdling”, or stripping the bark all the way around the tree, can kill it.

These herbs are especially good if there is vomiting. But what if the problem is at the, ahem, other end?

Blackberry is the old-timey standby for diarrhea. The leaves were favored by traditional European herbalists, while the Native tribes in the US favored the roots. In the US, blackberry plants are grown domestically and it is also a common wild plant.

The leaf is easier to harvest, and usually easier to find commercially than the root.  Leaves from raspberry (a close relative of blackberry) can be used as well, and both are best prepared as a hot tea. If you are making use of blackberry leaves from your own plants, harvest them as the plant is beginning to bloom and arrange them on screens or hang in bunches to dry until you need them.

The go to herb for end-of-meal digestive support, peppermint is also excellent for stomach bugs that leave you feeling gassy and bloated. Try hot peppermint tea with a little honey for best results.

In the garden, I always recommend planting peppermint in containers; if you plant it directly in the ground be aware that it spreads by runners and rootlets and is vigorous enough to kill other, more mild mannered, plants by crowding them out. I have also commonly found peppermint growing wild around old home sites and damp fields. It’s quite hardy and spreads freely.

As always, be aware that although many herbs have a long record of safe use, they can interact with prescription and OTC medications, so be sure to check with your doctor for potential problems before you use an herb for the first time.