Skip to content
167 shares
Some of the links in this post may contain affiliate links for your convenience. As an Amazon associate I earn from qualifying purchases.

My husband (Jim) surprised me with tickets to the Billy Joel concert in North Carolina last fall. Not only was I looking forward to the concert, but this also allowed me the perfect opportunity to put my situational awareness skills to the test. 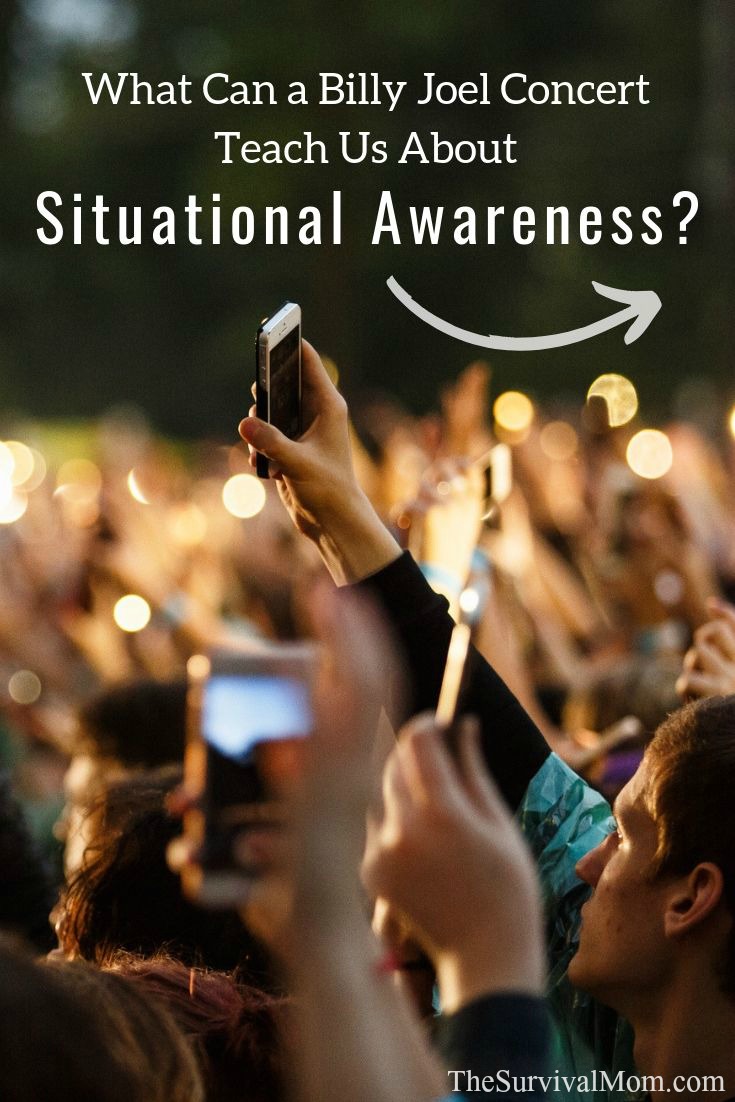 Situational awareness for women is both a science and an art, and over the years I’ve had plenty of time to put it to use.

Most of us can recall a time when we have had a “gut” feeling about something or someone. Often our subconscious can pick up on subtle signs that the conscious mind can’t. I know that I have often dismissed my “gut” feeling at the time. I think that I am overreacting, tired, paranoid or letting my mind wander too far. Every time I have listened to my “gut” feeling I have never been sorry. When I have dismissed it, I have regretted it.

The discipline part of practicing situational awareness refers to the conscious effort required to pay attention to gut feelings and to surrounding events even while you are busy and distracted. At such times even obvious hostile activity can go unnoticed, so individuals need to learn to be observant even while doing other things.

Situational awareness is something that should be practiced when we are not in a situation of stress. It should become a natural part of our everyday life. When we can see things around us changing for the worst, we are able to protect ourselves, change things or just leave the area. Think back to a time when you were able to watch something unpleasant unfold, and were able to avoid it. For years my husband and I would attend a company Christmas party. There always came a certain point in the evening when we decided to leave. We avoided the drunk drivers and drama that followed. That is a small-scale example, but we often see people interviewed on television that said that they had a “bad feeling” about something or someone. Here is an article about someone who followed their gut feeling and prevented a school shooting.

How do bad people think?

When in a new or unfamiliar area, or out at night it is time to step up your awareness and take better notice of your surroundings. What I have found that helps, is to think like a “bad” person. Most of us would never consider doing something horrible or to hurt someone, but we need to remember that there are people out there who do. They prey on people, and they are good at it. So, we need to look at who is at the gas station and ATM machine when we are there. Are there any cars just sitting, people that are just hanging around, or groups of people that look like they are just waiting? I have witnessed vehicles with someone in it, parked behind a large dumpster and in dark corners of a parking lot. When out and about, look for areas where bad people could hide.

When in places where there are a lot of people, it can be difficult. There is often a lot to see and do. Getting distracted is so easy. A few days ago, at the Atlanta airport, a woman attempted to kidnap 2 children. What I did notice in the video is the stroller, right in the center of the screen. A child left unattended while everyone else is looking at the commotion. Diversions are another tactic that people will use shift the focus of people. I gleaned a lot of information reading about how this man’s situational awareness save a little girl from a sexual predator!

I didn’t expect any problems at this concert. How much damage can middle-aged people do, right? It did give me the opportunity to notice things around me. There are some things I did do in advance to prepare. One was to drive around the stadium and area earlier in the day. It made it quicker to navigate traffic and the entrance that evening. Jim filled up the car with gas hours before the concert. Knowledge of the traffic routes to the concert and where the shuttle buses were going to be helped us avoid a long wait. Even with all of this preparation, I was surprised at other people and how they were reacting to things. There were some people who blatantly ignored the signal lights and had no regard for the safety of others. Tempers can quickly flare when traffic isn’t moving! We drove clear of the angry drivers the best we could.

When entering the venue, I looked for all possible exits and bathrooms. This was wise, as we later found out that they closed some of the exits after the concert was over. It was for Billy Joel’s security, but it did cause 31,000 people to leave with only a few exits available. I took a mental note of where the security and medical services offices were. We also looked at those who were sitting around us. I was looking for those who were suspicious or seemed to have been drinking before they arrived.

While waiting for the concert to start, Jim and I played the “what if…” game. What if a big fight broke out? What if an explosion happened? What if someone started shooting? We talked about each pretend scenario and what would be the best course of action. We noticed at the height of the various fences, walls, and places we could go or hide if we needed too.

What made this exercise even more interesting is that I had almost completely torn my Achilles tendon 4 months earlier. My ankle was definitely still on the mend and this had me look at my situation through different eyes. I purposely got seats near the end of the aisle, the hallway out and the exit. If an emergency or incident happened, I was not going to get anywhere too fast. Thankfully they had golf cart service from the parking lot to the entrance for the elderly and limping people like me. Again, if something bad went down, the golf cart driver would have been concerned about his own safety before getting me to my car!

After the concert, we took our time leaving the area. With the initial rush, we didn’t want to be in the middle of the chaos. And yet we were. With the closing of some of the exits, it was a mass of thousands of people, packed and attempting to shuffle down a concrete hallway. The staff were friendly but offered no direction to the exits that were open. Thankfully Jim is tall and can’t be pushed around too much. I stood close behind him with my fingers in the belt loops on the back of his jeans.

Eventually, we got out and realized that all of the small roads to the parking lot were at a standstill. It would take hours for me to take a golf cart to our car. We walked to a location where I was safe, near the exit to the main road and where Jim could easily pick me up. While waiting for Jim to run to the car, I was able to talk with security, EMT’s and the police. They were all busy helping others when the need arose. What no one considered was Hurricane Michael. It had torn through a few days earlier. Some roads were closed due to fallen trees and some of the traffic lights were still not working. It took us almost 2 hours to get out of the parking lot, onto the main road and out of the traffic.

What we discovered is that –

Remember where you are parked. Find a landmark, take a picture with your phone if you need to.

Keep valuables in the trunk or at home if possible. A large parking lot is a perfect place for people to do some breaking in.

Know what the security guards look like. This concert hired a private company to do security. Remember the name of the company, just in case you need help.

Look where bathrooms, EMT and security are located at in the parking lot. If you don’t need any of them, great! But you may need to assist someone else to find them.

Check rules for the venue- just because you may have gone to a concert at another location, the security rules may be different. No drinks, clear bags, metal detector, etc…

Any bag that you can carry on your body, not around your arm, is an advantage. Backpacks and fanny packs are great!

Carry food, water, and other supplies in the car. Even if it is a rental car.

I read in the news later that a variety of agencies would be looking into the stadium exits and traffic problems. They wanted to make sure that things that need to be improved were noted and any problems would not happen again. That is good to hear, but it is a reminder that the responsibility for our security and safety falls on us. We need to be prepared and develop our situational awareness skills. There are three essential principles we must adhere to in a self-defense situation The best time to start practicing- is now! 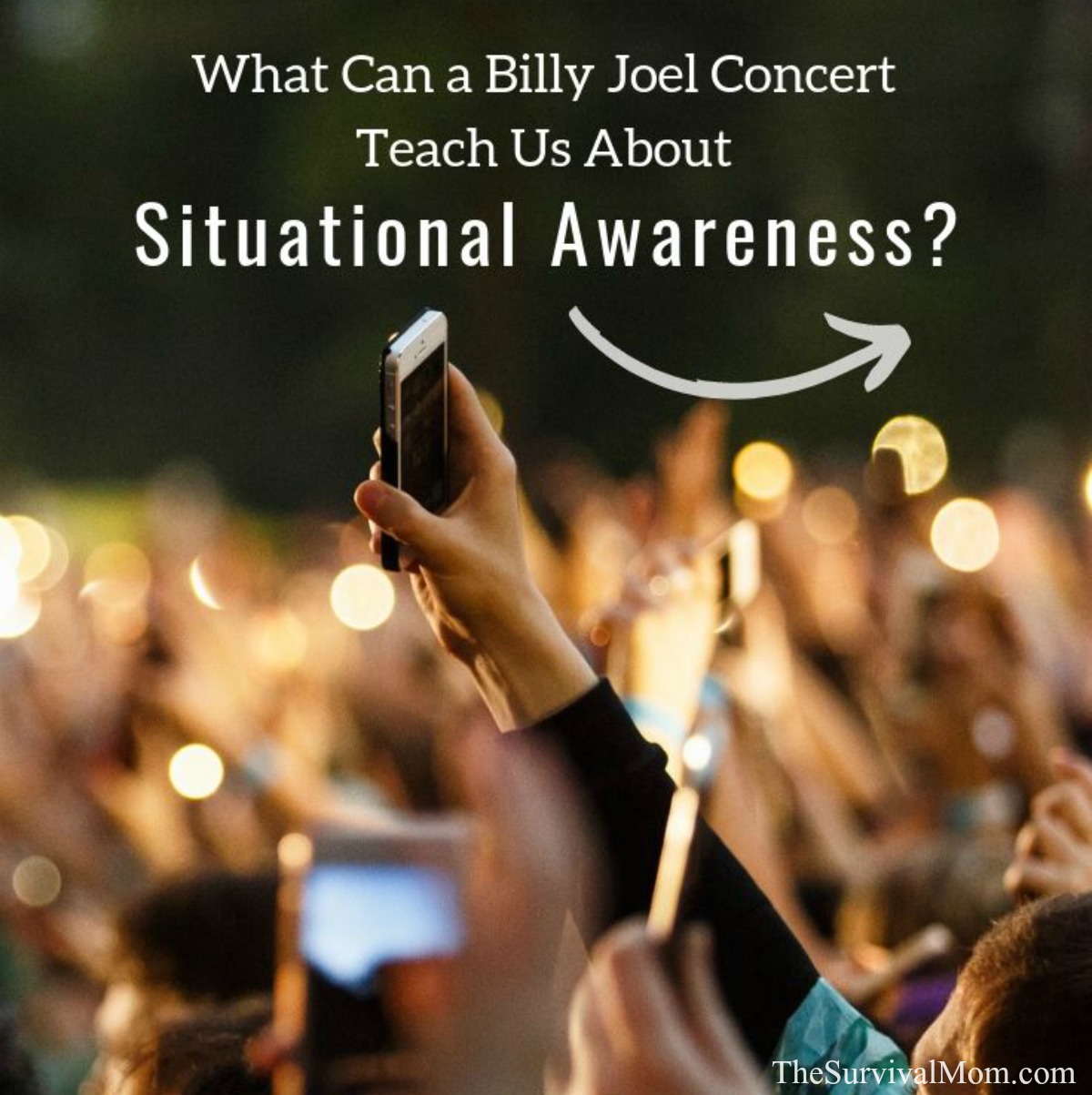 Erin Foster is mom to 5 kids. West Georgia is home where you can find her reading, camping, enjoying a play and on any adventure she can do with her family. Along with a B.A. degree in Emergency and Disaster Management, she has an EKG technician and nursing assistant certificate.

1 thought on “What can a Billy Joel concert teach us about situational awareness?”