Skip to content
47 shares
Some of the links in this post may contain affiliate links for your convenience. As an Amazon associate I earn from qualifying purchases.

30 percent of women globally have been subjected to physical and/or sexual violence at least once in their lifetime. This is according to a 2018 analysis of prevalence data from 2000 to 2018. That’s 1 in 3. Improving safety for women should be everyone’s job but you can’t count on that.

If you’re a woman, you could be a target someday, but you don’t have to be a victim.

In this article, I’ll teach you some of the same skills to improve your street smarts and avoid violence that I used and taught at the CIA.

But first, a story. 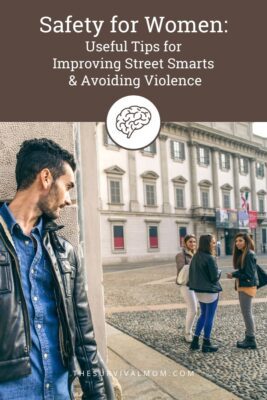 A Cautionary Tale About Situational Awareness

My day started out as a beautiful autumn morning. Very pleasant, in fact, despite the frenzied atmosphere as we readied our son for school.

We had recently moved and were living in Europe, in a new city beginning a new school year.

As my son and I rushed out the door and headed down the street to the school bus stop, I began the usual morning parental interrogation: Brushed your teeth? Check. Have your lunch? Check. Money for the field trip? Check.

A few minutes later, we arrived at the corner with other school children and pedestrians on their way to work. As we chatted, waiting for the school bus to arrive, I noticed one of the older students, the pretty daughter of a family who lived nearby, standing next to an older man a short distance away.

Just then, the school bus rolled up so I gave my son a hug and kiss goodbye. He and the other students shuffled towards the bus to board—all the students, that is, except for the girl, Jean.

I watched her for a moment, wondering why she wasn’t approaching the bus, then noticed that the man was standing between her and the bus. Each time Jean tried to walk around him he blocked her, moving his face closer to hers as he stepped back and forth in her path.

At first, I thought it might be a male friend, another student intent on teasing her. Then I noticed that he was an adult, and I saw the look on her face.

I told my son to wait and I approached the two. I first asked her if she was okay. “I’m fine,” she said in a frightened voice.

“I’m not done talking to her,” he said, as he moved around to face me.

“She’ll miss her bus, so she has to leave now,” I added, trying to stay calm.

“Yes, she is leaving now. Look, she is too young for you, anyway,” I warned.

“I don’t care how old she is,” he countered.

His last, disgusting statement made me angry.

Anger is an interesting, tricky emotion, a double-edged sword. It can be a good thing when it stirs someone to action when needed. It can also be a bad thing if not controlled and kept in check.

Despite my growing anger I tried to keep calm. I had been in another fight a few months earlier (protecting a victim who had been attacked in a subway) and did not relish the idea of returning to the office of Security in the U.S. Embassy and filling out another report. I gave the harasser another chance.

“Listen, her dad is a big guy, and a rugby player. You don’t want to mess with this young lady.”

“Right,” he smirked, “and what are you going to do about it?” With that last comment, he gave me a shove.

There was not much thinking from that point on, just reaction. I shoved him back. He stormed back at me with fists raised. I threw a punch, which hit him squarely on the left cheek. He came back for more. I struck him again, a blow which left him on the ground, his back against a tree. He then reached for his bag so I kicked it, sending pastries spilling out across the sidewalk.

The would-be sexual predator then whined, “Leave my croissants alone.” I answered, “Okay, if you leave her alone.”

It would have been funny, if not for the violence.

An analysis of the event and my response

I don’t tell this story to boast. I’m glad I intervened, but I made mistakes. I also did some things right.

What did I do wrong?

As I grew angrier and angrier, I experienced a bad case of tunnel vision.

My situational awareness went out the window, so to speak. I couldn’t see anyone but the man, the aggressor.

Did he have friends, family, or accomplices in the area? I didn’t know. I mostly just saw his face.

What did I do right?

I had arrived at the park with satisfactory situational awareness. I was aware of my surroundings as I waited and began loading my son onto the bus, despite the stress of trying to be on time, and distractions while saying goodbye.

The bus drove up and others were in the park. I recognized the students who were moving toward the bus and clearly identified others: pedestrians, people on their way to work, even retired people, milling about or sitting on benches.

And I saw the jerk.

Despite the emotions and anger, I still maintained some semblance of situational awareness. But emotions can make it difficult. Emotions will do that to a body.

Emotions can impair our observation skills and our awareness.

Obviously, the optimum time to thwart an assault is early on—the earlier the better. It’s better to identify him when he first approaches, or strikes up a conversation, or is following you, or watching you than to wait until you’re is standing on the “X”, or are in the back seat of a sexual predator’s vehicle.

Now let’s look at the levels of awareness that affect how situationally aware we are and thus how prepared we may be to avert danger.

Lt. Col. Jeff Cooper was one of America’s top authorities on personal self-defense philosophy. He created this code to identify the level of situational awareness possessed by an individual in a given moment. Many in the security field teach the concept of conditions, or levels, of awareness, or state of mind—white, yellow, orange, and red—and that we often drift between them during a typical day, often depending upon our emotions:

By remaining in Condition Yellow and staying aware of your surroundings, you can avoid many situations before you’re in danger. Many assailants, including rapists or sexual predators, follow a similar, chain-of-attack (unless they find a “target of opportunity”).

How can you break the chain of attack?

You must be observant and aware.

You need to see when a predator’s actions correlate with your own, such as noticing when he is browsing through magazines and then leaving the store at the same time you leave. And then after seeing him enter another store with you, you observe he also finishes his coffee at the same time or walks to the food court at the same time. You need to notice his demeanor: is he nervous, glancing at you, loitering without a purpose.

You must really see him.

When you see a possible correlation—between his actions and yours—you can take more provocative steps to confirm that he is following you. You can walk through the Walmart in a “stair-stepping” pattern, making several turns while heading to the Pharmacy, for example, rather than two long straight-aways. This forces him to take the turns with you and makes it easier for you to confirm that he’s following you.

Perhaps you execute a “reversal,” turning back down an aisle towards him and looking him in the eye, letting him know that you know. You might do a u-turn (vehicular reversal) when driving, heading back towards him, while jotting down his license plate number as you pass.

You can then speed-dial her dad, brother, friend, or the police, depending upon the situation. If you are in a store and know that someone is following you, contact the Manager of the store, or a security guard, and ask him to escort you to your car.

READ MORE: If you are a woman who is living in a car either by necessity or choice, read about the additional measures you should take to ensure your safety and well-being.

What happens when you are aware?

When a woman is aware, you’ll recognize an “X” and not go anywhere near it. If she sees a man standing next to his van, on her path ahead of her while walking from class to her dorm, she can stop well in advance. You’ll notice if he stops what he is doing, to see if there is any correlation with your action. Does he look in your direction, and act nervous? Or does he grab bags of groceries from his vehicle and head up the stairs into his home?

You might see a group of men in a parking lot near the exit of the movie theater, before you exit. You’ll stop and possibly act like you’re on the cellphone, noticing whether they continue talking and laughing before they proceed to their vehicle, or whether they’re watching you, and wait.

You’ll observe a young man loitering near the entrance to your apartment building as you approach. Is he a sexual predator waiting for a young woman to arrive so he can push his way in the door and rape her? You can assess the situation and know if he is dangerous by stopping and waiting some distance away. You can watch, and might see the man’s girlfriend exit a minute later, and see them leave hand-in-hand—mystery solved, danger averted.

How will you feel?

Will your situational awareness cause you some perceived embarrassment? Will you feel paranoid when you turn down a ride from a man you don’t know well? Or will you feel foolish that you hesitated, that you were a scaredy-cat when you waited inside a store or asked the manager to accompany you to your vehicle? Will you be embarrassed if you intervene on behalf of a friend who might be in danger?

No! You should feel proud that you are careful, aware, and smart. And you know what? You may never know that your observation, awareness, and pause—that extra few seconds of waiting—might have just saved your life or the life of a friend.

How did I feel after my confrontation at the bus stop?

Was I embarrassed that I got in a second fight, in less than 6 months? Maybe, a little.

But I was glad that I was aware enough to notice a young woman in need of help.

What might have happened if I had been oblivious and focused only on getting my son on that bus, and hurrying off to work?

Who knows. But it didn’t happen, because I was situationally aware. And Jean went to school and returned home later that day, safe and sound.

What are some measures you use to help you stay safe as a woman?

This article was contributed by B.D. Foley. His book CIA Street Smarts for Women: Spy Skills to Tell the Prince from the Predator provides more information and specific skills. These are the same skills that he used and taught in the CIA about how to test, vet, and “read” men; elicit information on their true intentions; avoid emotional vulnerabilities and manipulation; project a confident demeanor to stay off a predator’s “radar”; turn down an invitation or break-up safely; and much more. Stay safe! 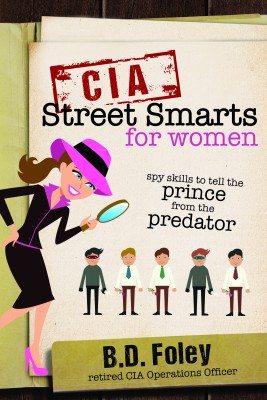 Originally published on October 28, 2015, this article has been updated.