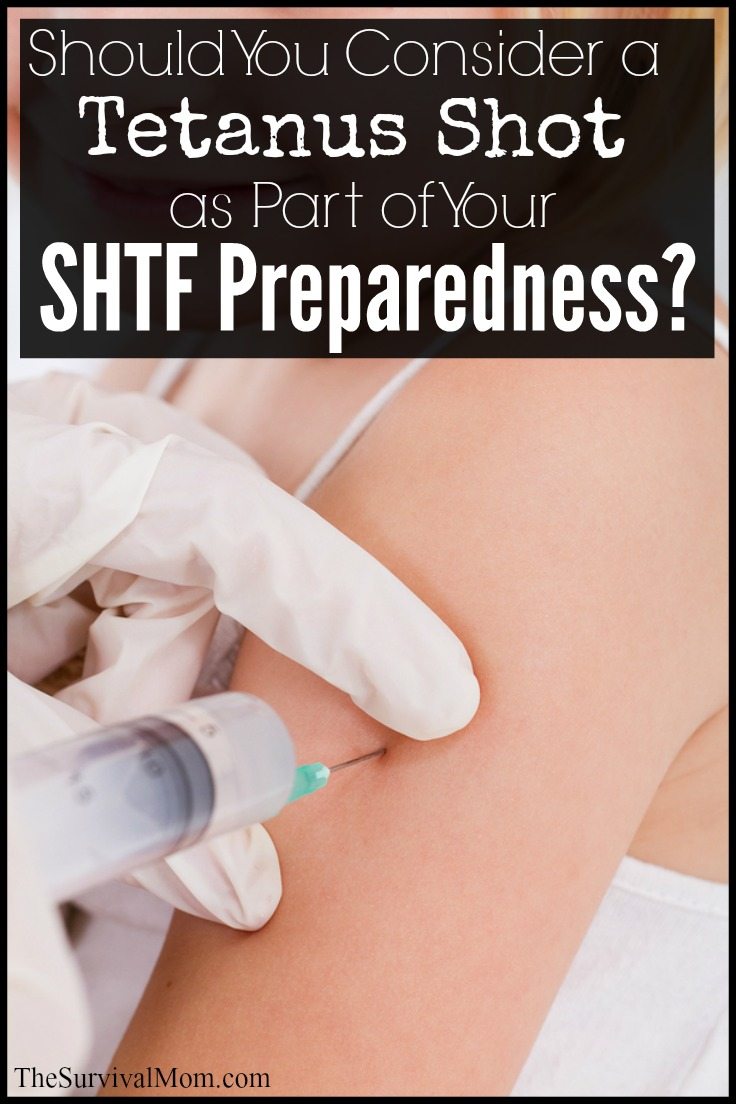 Have you ever thought of certain vaccines as a way to prepare for an uncertain future? One reader asked if a tetanus shot might be a good choice for such a scenario. I asked Dr. Joe Alton, known to many as Dr. Bones, and here is some information he provided, originally posted on his website DoomandBloom.net

Most of us have dutifully gone to get a Tetanus shot when we stepped on a rusty nail, but few have any real concept of what Tetanus is and why it is dangerous.  The role of the survival medic is to maintain the well-being of their family or group in a collapse.  This can be best assured with an understanding of what infectious disease is.  Knowledge of risks, prevention. And treatment will be the armor plate in your medical defense.

Tetanus (from the Greek word tetanos, meaning tight)  is an infection caused by the bacteria Clostridium Tetani.  The bacteria produces spores (inactive bacteria-to-be) that primarily live in the soil or the feces of animals. These spores are capable of living for years and are resistant to extremes in temperature.

Tetanus is relatively rare in the United States, with about 50 reported cases a year.  Worldwide, however, there are more than 500,000 cases a year.  Most are seen in developing countries in Africa and Asia that have poor immunization programs.  Citizens of developed countries may be thrown into third world status in the aftermath of a mega-catastrophe.  Therefore, we can expect many more cases that could be your responsibility as medic to evaluate and treat.

Most tetanus infections occur when a person has experienced a break in the skin.  The skin is the most important barrier to infection, and any chink in the armor leaves a person open to infection. The most common cause is some type of puncture wound, such as an insect or animal bite, a splinter, or even that rusty nail.  This is because the bacteria doesn’t like Oxygen, and deep, narrow wounds give less access to it. Any injury that compromises the skin, however, is eligible; burns, crush injuries, and lacerations can also be entryways for Tetanus bacteria.

When a wound becomes contaminated with Tetanus spores, the spore becomes activated as a full-fledged bacterium and reproduces rapidly.  Damage to the victim comes as a result of a strong toxin excreted by the organism known as Tetanospasmin.  This toxin specifically targets nerves that serve muscle tissue.

Tetanospasmin binds to motor nerves, causing “misfires” that lead to involuntary contraction of the affected areas.  This neural damage could be localized or can affect the entire body. You would possibly see the classical symptom of “Lockjaw”, where the jaw muscle is taut; any muscle group, however, is susceptible to the contractions if affected by the toxin.  This includes the respiratory musculature, which can inhibit normal breathing and become life-threatening.

Symptoms and treatment of Tetanus

The most severe cases seem to occur at extremes of age, with newborns and those over 65 most likely to succumb to the disease. Death rates from generalized Tetanus hover around 25-50%, higher in newborns.

You will be on the lookout for the following early symptoms:

Initial symptoms may not present themselves for 1- 2 weeks. As the disease progresses, you may see:

The first thing that the survival medic should understand is that, although an infectious disease, Tetanus is not contagious. You can feel confident treating a Tetanus victim safely, as long as you wear gloves and observe standard clean technique.  Begin by washing your hands and putting on your gloves.  Then, wash the wound thoroughly with soap and water, using an irrigation syringe with 3% hydrogen peroxide to repeatedly flush out any debris.  This will, hopefully, limit growth of the bacteria and, as a result, decrease toxin production.

You will want to administer antibiotics to kill off the rest of the Tetanus bacteria in the system.  Metronidazole (Fish-Zole or Flagyl) 500mg 4 times a day or Doxycycline (Bird-Biotic) 100 mg twice a day are among some of the drugs known to be effective.  This study compares the use of Metronidazole versus Penicillin G.

Remember, the earlier you begin antibiotic therapy, the less toxin will be produced.  IV rehydration, if you have the ability to administer it, is also helpful. The patient will be more comfortable in an environment with dim lights and reduced noise.

Late stage Tetanus is difficult to treat without modern technology.  Ventilators, Tetanus Antitoxin, and muscle relaxants/sedatives such as Valium are used to treat severe cases but will be unlikely to be available to you in a long term survival situation.  For this reason, it is extraordinarily important for the survival medic to watch anyone who has sustained a wound for the early symptoms listed above.

As medic, you must obtain a detailed medical history from anyone that you might be responsible for in times of trouble.  This includes immunization histories where possible.  Has the injured individual been immunized against Tetanus? Most people born in the U.S. will have gone through a series of immunizations against Diptheria, Tetanus, and Whooping Cough early in their childhood. If not, encourage them to get up to date with their immunizations against this dangerous disease as soon as possible. Booster injections are usually given every 10 years (or if 5 years have passed in a person with a fresh wound, sometimes along with Tetanus Immunoglobulin antitoxin).

Tetanus vaccine is not without its risks, but severe complications such as seizures or brain damage occur is less than one in a million cases.  Milder side effects such as fatigue, fever, nausea and vomiting, headache, and inflammation in the injection site are more common.

Given the life-threatening nature of the disease, this is one vaccine that you should encourage your people to receive, regardless of your feelings about vaccines in general.  If not caught early, there may be little you can do to treat your patient without all the bells and whistles of modern medicine. 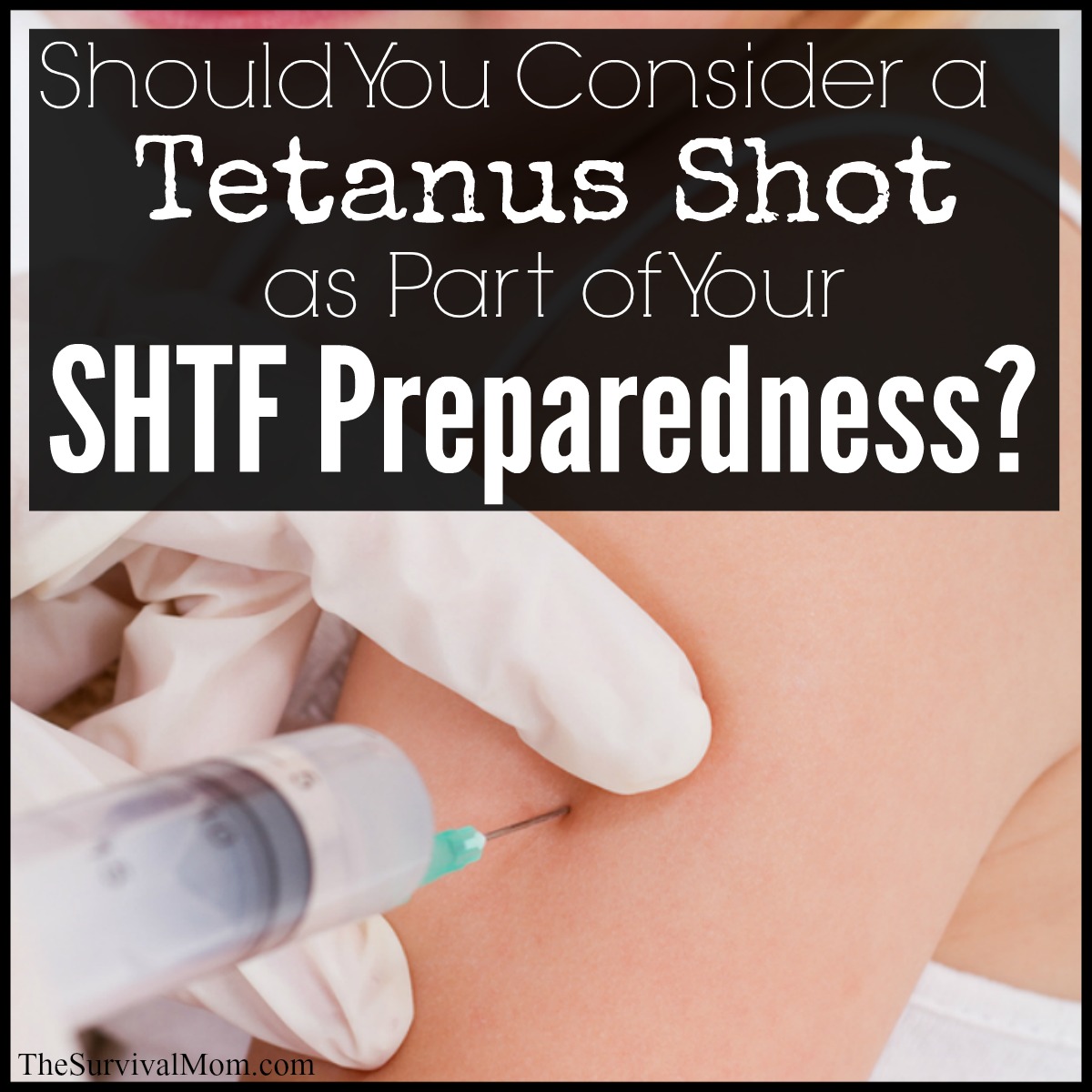 Joe and Amy Alton are the authors of the #1 Amazon Bestseller “The Survival Medicine Handbook“.  See their articles in Backwoods Home, Survival Quarterly, and other great magazines. For over 600 articles on medical preparedness, go to their website at www.doomandbloom.net.

The opinions voiced by Joe Alton, M.D., and Amy Alton, A.R.N.P.,  aka Dr. Bones and Nurse Amy, are their own and are not meant to take the place of seeking medical help from your healthcare provider.

6 thoughts on “Should You Consider a Tetanus Shot as Part of Your SHTF Preparedness?”