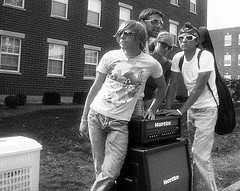 In spite of the earnest efforts of Doomsday Preppers to make preppers look extreme and laughable, more Americans than ever are prepping and there’s a plethora of best-selling survival and prepper books to prove it.

Now, even the cool kids are making trips to Costco and Sam’s Club, loading up carts with rice, canned foods, and dental floss. Freeze-dried foods like these are now trendy with non-GMO ingredients and ban on high fructose corn syrup! (Cool kid approved!) The world of preparedness is no longer just the realm of grizzled men wearing plaid shirts and carrying shotguns or Mormons with basements lined with #10 cans of food!

What is it about preparedness that is attracting the cool kids? Here are 7 reasons why I think prepping has suddenly become more than plain old common sense, but in some parts of the country, prepping is now ultra-cool.

1.  Cool kids tend to be skeptical of authorities. It’s no longer just the school principal who gets their smirks but government officials and the media as well, who hurry to shape a narrative that the economy has improved and it’s safe to start wild shopping sprees again. The cool kids of today, ranging in age from about 15 to 150, use alternative sources to get their information and news and then compare it with the official, often government-sanctioned versions on the major news channels. Rule of thumb: if the mainstream news and government gives one message, you can pretty much bet the truth is opposite.

2.  Cool kids don’t forget easily. Remember the crash of the housing market? Remember the downfall of Bear Stearns and news that a financial crash was imminent? How many people do you know who lost jobs, homes, and businesses during those years? Many of them were the cool kids, and they haven’t forgotten.

3.  Cool kids know from experience that eventually, their misdeeds will be noticed and punished. Unfortunately, that lesson has never been learned by those running the government.

In spite of billion dollar bailouts, the deep issues that brought about the Great Recession of 2007+ were never addressed with much more than words. The issues are still there, winding their ugly, destructive roots even deeper.

One day, the piper will have to be paid. That day is on the calendar; we just don’t know exactly when it will happen. So, the cool kids watch, wait, and prep.

4.  Cool kids are watching the price of basic living expenses rise, along with taxes. For each of us, there comes a breaking point when we realize we cannot work any harder, and we cannot cut the household budget any deeper. As Americans get closer and closer to that breaking point, prepping makes more sense than ever.

Cool kids tend to notice trends, and the rise of prices and taxes is one that can’t be ignored. They’re willing to pay their “fair share”, but along the way, they noticed that U.S. Debt Clock, with numbers so big the only other time we talk about hundreds of billions and “trillions” is when we’re talking about space.

5.  Cool kids have come to realize that government assistance in a crisis is unpredictable, at best, and non-existent at worst. Superstorm Sandy taught this tough-love lesson to thousands of people along the East Coast. Even those who were prepared soon discovered the limits of their preps and the frustration of working with federal agencies.

The cool kids realize that in a big enough crisis, who ya’ gonna call? Why, yourself, of course, so you’d better get ready now to answer the phone!

6.  Let’s face it. It’s kind of cool to have a secret stash of food or ammo or wear a paracord bracelet for the first time! This is new to most Americans and launching into the unfamiliar territory of survival is pretty thrilling. And cool.

Prepping is also a way to connect to our roots and learn skills and gain knowledge that somehow bypassed our parents, and maybe even grandparents. We’re reaching waaaay back to learn things like herbal medicine, dehydrating food in the sun, and trapping animals for food. Staying alive? That’s cool.

7.  Sometimes cool kids introduce new trends to their circles of family and friends, and that’s one way prepping is being spread. Being prepared is smart, fun, challenging, and cool. Why not tell your girlfriends or your buddies about it?

When the S really hits the fan, old-timers may have to thank the newcomers for making self-reliance and prepping a trend because there will be fewer unprepareds, knocking on the door and expecting a handout.

If you’re a prepper or just define yourself as, “a smart person who sees the writing on the wall,” then you’re cool! And, since cool kids hang out together, we have an enormous, powerful clique. Are you cool enough to join?