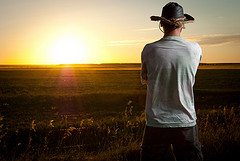 Last week’s Action Step was a recommendation to find a good source of wheat and stock up.  A reader made the comment that buying wheat from feed stores was a bad idea because of pesticides.  I wanted to check that out for myself, so first, I made a few calls to local feed stores.  Surprisingly, only two carried “feed wheat”, and neither could say for sure that it was pesticide-free.  One store went so far as to check with their supplier to see if I could get “organic” wheat, but t wasn’t available.

My next step was to talk with an actual wheat farmer in Idaho.  I’ve purchased a couple hundred pounds of wheat directly from him and wanted to hear what he had to say about the use of pesticides and the storage of feed wheat.  Turns out, he was quite talkative!

Not surprisingly, he said that farmers will only use pesticides when it’s absolutely necessary.  It’s an additional cost that cuts into their profit margin.   He told me about an incident a few years ago when grasshoppers invaded his farm, consuming 20 square feet of wheat every day for weeks.  His only choice was to use a pesticide, which he limited to only the perimeter of his fields, hoping to kill any new grasshoppers intent on eating the ripening wheat.  Ultimately, the insects consumed 40% of his crop.

He mentioned that some neighboring farmers chose to spray their entire fields with pesticides. 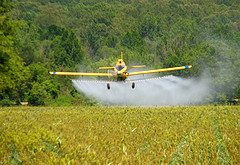 I asked about the use of fungicides, and again, this is an expense farmers want to avoid but often can’t.  Apparently, there was a problem with wheat leaf frost last year that required many farmers to spray fungicide over their fields.  However, typically a fungicide is sprayed early in the season, before the head of the wheat has had a chance to ripen.  Once the wheat is ripe, any traces of the chemical is undetectable.

According to this farmer, the cost of cleaning wheat properly is very expensive.  The equipment he owns cost more than $75,000.  Not only is the equipment expensive, but the cleaning process takes a lot of time.  Again, farmers have to be mindful of the costs involved with producing their wheat, so unless the wheat has to be thoroughly cleaned, it won’t be.  Feed wheat, that is, wheat sold as animal feed, isn’t cleaned nearly as well as wheat intended for human consumption.

Actually, cleaning feed wheat can be counter-productive because there are things like chaff that are actually good for animals.  Some cleaning is necessary, of course, because dirt, insects, and insect parts must be removed before the wheat is shipped and sold.  Cleaning the wheat at any level, however, doesn’t remove herbicides or pesticides. 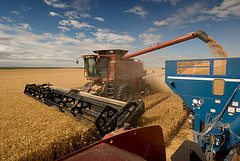 The question still remained, is it smart to buy feed wheat for food storage?  This farmer stated, “People who do that are nuts!”  Here’s his explanation.

Not only is feed wheat not cleaned nearly as well as wheat for human consumption, it is also likely to be a combination of wheats from many different farms.  It’s possible that a grain silo might contain a hundred or more different varieties of wheat.  When it comes to actually using the wheat for food, there’s no way to guarantee what the make-up will be or how much protein or gluten the “blended wheat” contains.  This is his pet peeve.  He said that at least half of the companies who sell wheat in buckets and bags sell “blended wheat” and to look for that phrase on their labels.

So?  What is a prepper to do when it comes to buying feed wheat?  One suggestion from this farmer is to talk with the feed store owners and find out as much as possible about where their wheat comes from, how it’s treated and how it’s cleaned.  There will probably be no guarantee that it’s pesticide-free unless it’s from a certified organic farm.  Azure Standard is one such source, and you’ll find others online with a simple Google search for “organic wheat”.  You won’t be paying $15 for 50 pounds, however.

As with anything else we do, be guided by common sense and reliable information.