Skip to content
49 shares
Some of the links in this post may contain affiliate links for your convenience. As an Amazon associate I earn from qualifying purchases. 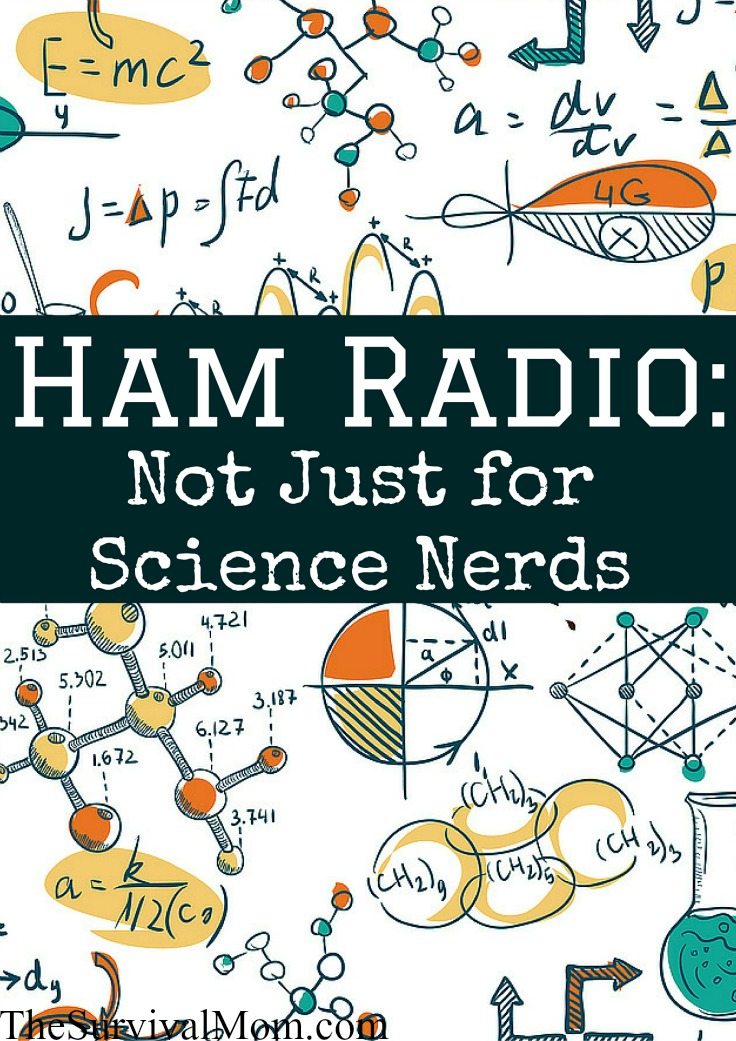 My status as a prepper means I’ve developed something of a varied skill set over the years, from spinning wool to the martial arts. So you’d think by now I’d have learned to think twice when the thoughts, “Oh, I could never do that,” and “that kind of thing isn’t for people like me,” enter my head.

I used to think that way about canning fruit, but now I can knock out a batch of apple pie filling in like an hour and a half and it’s not even a big deal. But it took quite a bit of nudging for me to think that ham radio was something I could add to my ever-growing list of hobbies, especially given my status as a liberal arts (not science) major.

My high school in Texas had a very active ham radio club. They advertised their club meetings aggressively and were very active in trying to recruit more members. I ignored them because I mistakenly thought that ham radio was for a much different class of nerd than the one I occupied. Specifically: the class of people who know what capacitors and resistors are and what they do, can solder things, collect wires, and think mistakes in circuits are the best kinds of jokes. I certainly had a thing for Star Trek, but was more of a Latin Club, Lord of the Rings kind of gal. Ham radio wasn’t for people like me.

Given my status as a stay-at-home mom of three kids, communication in an emergency is something that has weighed heavily on my mind as we’ve refined our preparation strategy. What if, in a scenario that involved downed cellphone towers and zero internet access, I desperately needed to send for help? Amateur radio has a proven track record and is known to be an excellent means of communication in times like I have described. It helped that some folks in my neighborhood asked me to be the go-to emergency preparedness person; that gave me the nudge I needed to bite the bullet and get my Technician’s license.

With some trepidation, I checked out the ARRL liscensing manual from the library and spent some time reading through it. I wasn’t very many pages in when I looked up from my studying and asked my electrical engineering-major husband, “How come I’m the one getting into this stuff and not you? You could probably pass the exam without even studying at all.” Much of the study material was far outside my comfort zone. I managed to find time to study several nights a week for the better part of a month, and with the help of online study aides like Ham Study and Ham Exam I successfully passed the licensing exam on my first try.

I signed up for a crash-course of sorts that took place before the exam, in hopes that it would fill in any gaps in my studying. I went in there expecting to find mostly stereotypical engineer-nerd types: guys ranging in their early 20s to mid 40s with little dress sense and worse social skills. The type of people who actually attended surprised me. I sat in between two silver-haired ladies, both of whom loved nothing more than to regale me with stories about their grandchildren. A middle-aged guy sitting in back of me attended the class with his two teenage daughters and his mother-in-law.

I also had the false expectation that old-timers in radio would scoff and roll their eyes at the idea of a housewife trying to become a ham, much like one sees in the gamer community. (“Pfft, n00bs.”) Quite to the contrary, all the hams with whom I’ve interacted have been overjoyed to welcome more people into their fold. When I contacted the local university if I could, as an alumna, participate in their radio club, the advisor gave me an enthusiastic affirmative response. It’s a little like a religious movement in this aspect – underneath everything, hams feel a glimmer of hope that they can convert everyone they know.

The test itself is set up for this. It covers only the bare minimum of what new hams should know before getting on the air. All test questions and answers are open to the public, so you could easily, if you were so inclined, simply memorize the correct answers without actually understanding anything about radio. The clear goal is to freely give people the tools needed to get started, in hopes that they will get “the bug.” Many of the questions are simple enough that children as young as ten can and do pass the exam and become licensed amateur radio operators. This should be a lesson for us all – if a kid can do it, there’s no reason why any literate adult can’t do the same.

My experience, so far.

I want to reiterate that my experience with amateur radio has not been easy-breezy. I studied International Relations and Area Studies in college, not circuits and sine waves, so the technical aspect was quite challenging for me. I did find, to my relief, that this branch of knowledge was not beyond my understanding. That didn’t stop me from closing my study manual at regular intervals to throw my hands into the air with the impassioned lament, “I don’t even know why I’m doing this. I’m not a technical person. This is crazy. It’s not even like I’ve always wanted to do this, it’s just a dumb idea that popped into my head one day.”

These are thoughts that I’m sure plague all of us when trying to learn a new skill, especially when it doesn’t come right away. Even though it was hard, I can see the value in having taken the time to study and learn about the subject, independent of having obtained my license. How many of us carry smartphones around with us every day? How many of us have wifi installed in our homes? Those things are such a major part of our modern lives, but do we understand even the basics of how they work?

The reading I did to prepare for my exam gave me a new appreciation for technology we so often take for granted. It’s something I feel everyone should look into, regardless of whether you decide to become a ham. Not only that but stretching myself was (and is!) enriching and has been the cause of personal growth.

It’s been good for my kids to watch me take this step, as well. Mostly they think it’s cool; my six-year-old made a radio transceiver out of legos, and my three-year-old drew a picture of some mysterious technical device that required a “big call sign!” in order to work. On a more serious note, I believe that their observation of me has taught them that learning and growing is not something that stops when you get your diploma; it’s a life-long endeavor.

I hope that my experience will inspire more people like me – those of you in the liberal arts, who never thought of doing something “technical” – to give ham radio a chance. You’ll be glad you did.

9 thoughts on “Ham Radio: Not Just For Science Nerds”