Skip to content
118 shares
Some of the links in this post may contain affiliate links for your convenience. As an Amazon associate I earn from qualifying purchases. 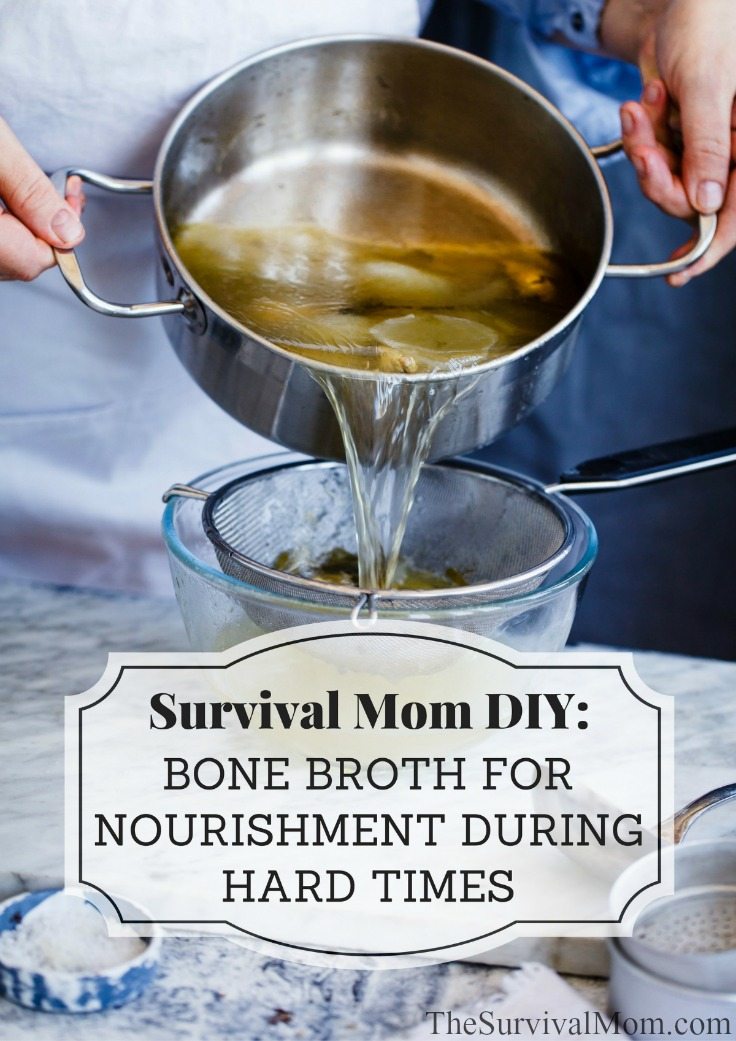 Bone broth has been enjoying a resurgence in popularity in the last little while, but it’s actually been around for a while. Some people refer to it as stock, but according to culinary experts, while stock and broth are related, they are distinct liquids with different characteristics. Functionally, though, they are so similar that I’ll be treating them as though they are the same thing in this article.

One of my favorite meals growing up was my mom’s turkey noodle soup, made from the little bits of meat and bones of our leftover Thanksgiving turkey. My mom would make a huge pot of it every year, which we would then keep in the fridge until someone felt a little peckish. The broth would set up like Jell-O, so if we wanted some we’d have to gouge out a portion with a measuring cup; it would melt into a liquid in the microwave.

Her secret? Boiling the turkey bones the way she did, created bone broth. She didn’t know it at the time, but she was a trend-setter before bone broth was a trend! They say that if the broth becomes a solid upon refrigeration, you’re doing it right. And she created perfect bone broth every time. Objectively, I can see how perhaps this description would seem unappetizing to some, and that is unfortunate because soup broth had a rich, delicious flavor that could not be rivaled by lowly bullion cubes.

Bone broth has been part of global culinary culture of millennia (these recipes from Ancient Mesopotamia call for chicken stock), and it continues to pop up in our wider culture, even apart from the fact that it has suddenly become trendy. Remember that scene from the film Nanny McPhee where the slightly crazed military cook exclaims with glee, “There’s a lot of goodness in a turkey neck!” and the audience collectively goes, “Ugh,” at the unappetizing sight? Ta da! Bone broth!

From a survival or prepper’s point of view, bone broth is one way to stave off nutritional deficiencies or even starvation in an extreme scenario. It’s important to know how to make bone broth for that reason alone, although if the power grid has failed and you’re making this over an open fire, just know it will need to be consumed quickly, since refrigeration might not be an option.

Bone broth is economical, flavorful, nutritious, and on top of all that is a good way to use the little tiny scraps and bits of protein that can be found on bones. Bone broth at its most basic can be made in three steps:

Soup bones are extremely inexpensive and can be found at any regular grocery store. Usually these will be labeled “soup bones” and can be found in large quantities for as little as one dollar. Oxtails and sections of beef shank are slightly more expensive but also make excellent bone broth. Bones from fish or poultry are equally effective.

Alternately, just keep any bones from your everday cooking. I keep bones in a zip-loc bag in the freezer until I’m ready to make a large batch of broth. If you get your meat from farmers, be sure to ask for any bones they might otherwise discard.

Boil and boil. Boil those things into oblivion. This can take up to several hours. The process can be expedited by using a pressure cooker instead of a regular stock pot (more on that later). This process gets all the nutrition that can be had out of the bone (bits of fat, protein, collagen, etc.) and into the broth.

There is some debate as to how long you should boil your bones. Some say 2-3 hours is sufficient, while others claim that you should leave it to simmer overnight or as long as a full 24 hours. Many suggest roasting beef bones first for optimal flavor, but I have been known to skip this step and still be pleased with the result. You can also add vegetables to your bones during the cooking process, and this does improve the flavor. Aromatic vegetables like celery and onions and herbs are popular additions, as are carrots.

Step three: Strain out the solids

Because, you know, you couldn’t actually want to eat the bone. (While crunchy, the bones would most likely do a number on your teeth, apart from being a possible choking hazard.)  If you used the carcass of your Thanksgiving turkey or the leftovers of a roast chicken, you’ll find lots of teeny little bones and bits of gristle that you’d rather not find in your soup. Any solids remaining from vegetables can be discarded, as after an intense boil all of the nutrients have gone out of them and into the broth.

A note on economy

In times and places where rationing has been in place, getting good cuts of meat became extremely difficult, if not impossible. If meat was being sold by the pound, it was in the butcher’s best interest to sell you a cut that mostly contained bone. Using the bone for broth meant the money spent on the meat could be used to the fullest extent possible. Before the 20th century when the vast majority of humans lived in conditions that we moderns would consider abject poverty, using bones in this way became a matter of course. All the more reason to know how to make bone broth in order to maintain a high level of nutrition for your family. During the Great Depression, surely many utilized bone broth, or stock, in their meals, along with the foods on this list.

On nutrition and bone broth

In health food circles, bone broth has been tied to a number of health benefits, including better joint health, improved digestive function, and improved immune response. Bone broth is high in minerals such as manganese, calcium, and iron. It has enjoyed some popularity as an alternative to sports drinks – the sodium content replaces electrolytes, but without all the sugar that sports drinks are known for. Nutrition experts warn that while very healthy, bone broth shouldn’t be viewed as a cure-all.

If you don’t already have a pressure cooker, go ahead and get one. Cooking foods under pressure means they are done in less time than if you were to use a conventional pot or pan. From a preparedness standpoint, cooking things more quickly means not only less time, but also less fuel. A regular, run-of-the-mill one with no bells or whistles can be found on amazon for about $45. As with all things, you can also get a super-fancy one for over $100 if you felt so inclined. More on using pressure cookers can be found here.

An electronic pressure cooker can be powered up by a smaller generator, in a worst case scenario, although, admittedly, it would be worthless in a long-term power failure. A standard pressure cooker can be used on something like a campstove, but the tricky part would be maintaining the level of heat and pressure throughout the cooking time. This isn’t impossible by any means, but just know that it would be a factor, since the heat from altnerative cooking stoves can fluctuate.

Otherwise, a large stock pot filled with water and bones and brought to a boil and then kept at a low simmer for several hours will produce bone broth just fine.

Alton Brown, as with so very many things, has the best bone broth recipe. Technically this is a stock, not bone broth, because it’s cooked for less than 24 hours, but it can be used the same. Please note that his method calls for the use of a pressure cooker.

Another recipe for bone broth can be found here, courtesy of the Paleohacks blog.

If you aren’t already a fan of bone broth, I hope you will be inspired to become one! And if you are, what is your favorite use for it? 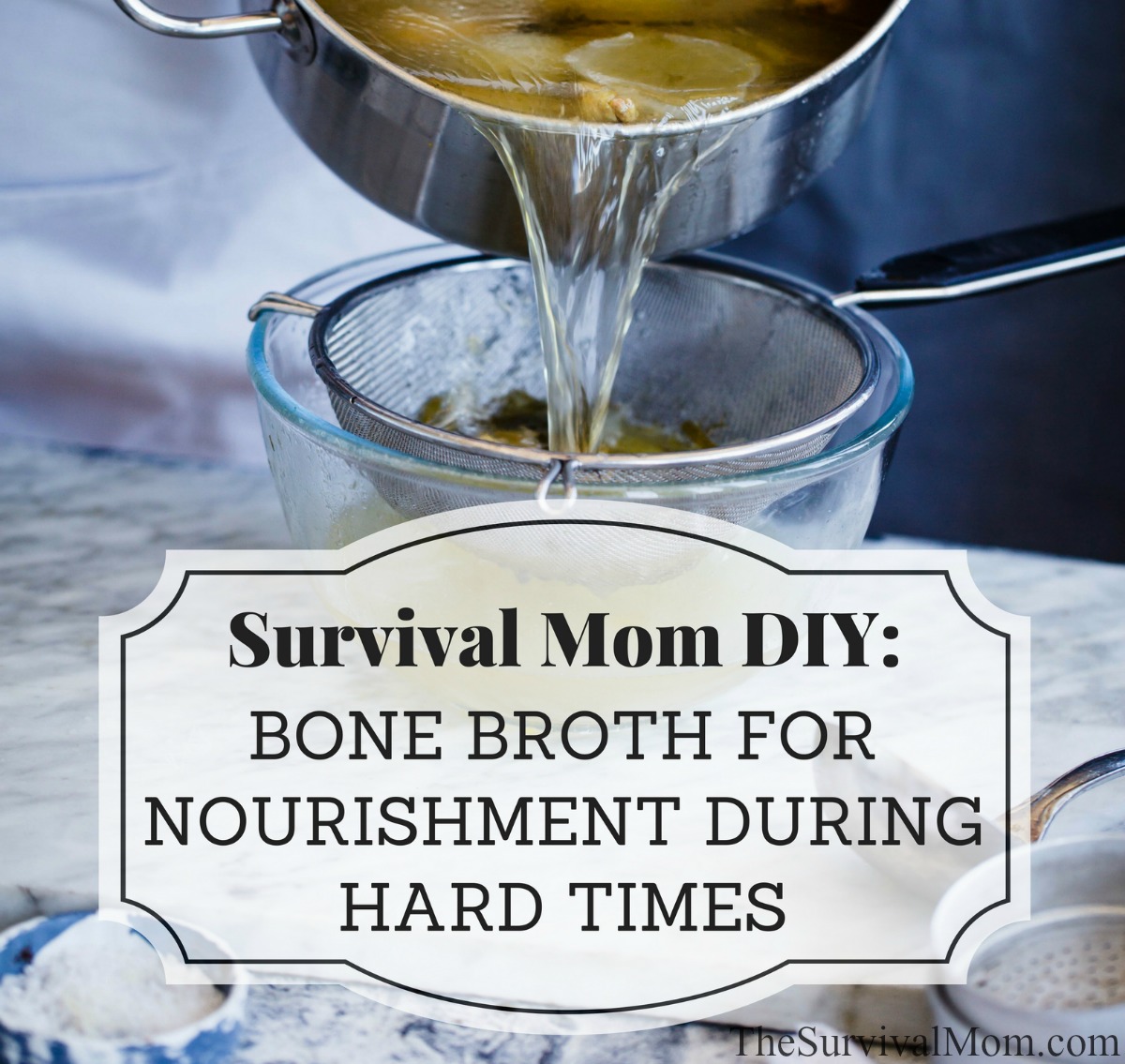