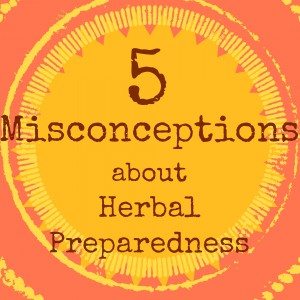 As an herbalist and a prepper, I have noticed several common misconceptions people have about using herbs in general, but that especially apply to people interested in learning about herbs for preparedness.

These misunderstandings usually come from overly simplified ideas about plants and herbalism.

Keeping it simple is good, but oversimplification can get in the way and, in this case, even cause harm. So what’s a would-be herbal prepper to do?

Let’s look at the five most common misconceptions about herbs that seem to affect the prepper community.

Misconception #1: If It’s Natural, It Must Be Safe

Reality: Not necessarily! Most herbs have a high margin of safety, but some are toxic in large amounts or under certain conditions. Some herbs should be avoided during pregnancy because of historical use as abortifacients.

Other herbs that were considered safe traditionally have been found to contain toxic compounds when subjected to modern research. Examples include herbs like Borage and Comfrey, which contain alkaloids that can cause liver problems.

Herbs can also interact with other medications, so make sure you keep your doctor apprised of any herbal supplements you take regularly.

In Traditional Chinese Medicine (TCM), herbs are classified into three groups: the first level are as safe as foods. The second are more targeted in their effects on the human body and are used safely as needed. The third level are used sparingly, and may contain plants that modern science has identified as toxic.

For example, lobelia is an herb commonly used for lung problems and as a natural aid to stop smoking. Lobeline, part of the plant’s chemical profile, is similiar in structure to nicotine but is non- habit forming. However, in large amounts, lobeline can act as an emetic and cause vomiting.

Reality: You may not have been using the right herb for the job, or used it the right way. Herbs actually have a complex relationship with the human body when used correctly. Because worldwide traditions of herbalism focus on the state of balance within the human body as a whole, rather than the modern, western fascination with disease as a separate entity, it can be difficult to translate the proper use of herbs into a modern context.

Many resources make the mistake of oversimplifying, listing herb after herb under each category with no distinction of the most appropriate situation for use. A great example of this is herbs for coughs. The list typically goes something like this: plantain, coltsfoot, thyme, marshmallow, cherry bark, pleurisy root, elecampane, mullein…and it could go on! Does that mean that all the herbs on the list can be used interchangeably? Far from it!

Plantain and Marshmallow are going to give the most benefit to a dry cough where there is only a little mucus that is hard to bring up. Herbs that can be used when there is lots of mucus that the body is trying to expel include cherry bark and elecampane.

Mullein is a wonderful herb for coughs, but it is traditionally used for allergies and asthma rather than an acute respiratory illness. Herbalists observed that it works on the cough reflex, so using it while the body is trying to get rid of lots of mucus is not a good idea! Suppressing the reflex and having the mucus just sit around in the lungs can set the stage for infection.

So, as you can see, all of the above herbs are great for coughs, but it’s important to consider the type of cough for best results.

In addition, some herbs are drunk as a tea, others are inhaled in steam, and still others are applied topically. You can rub chamomile on your tummy all day long, and it still won’t help you sleep the way drinking a cup of chamomile tea does.

Reality: Much of the current research on herbs has been done overseas, rather than here in the US, but there is actually plenty of literature in medical journals worldwide to explore. Most research focuses on identifying the active constituents in the chemistry of plants. This leads to more information on why a plant traditionally used for a given ailment was effective, and how that can be harnessed for the modern pharmaceutical industry.

Digitoxin is a cardiac drug that is one example of this. It was originally extracted from the herb Foxglove (Digitalis purpurea), used by medieval herbalists.

It is interesting to note that many traditions of herbalism rely on taste to group herbs into different useful categories. Before modern chemical analysis emerged, this was a crude way of noticing that the chemical make ups of the plants were different.

Many “bitter” tasting herbs were observed to have a “cooling” effect on the body, and therefore matched with the observation of “heat” in the body. “Heat” conditions in traditional herbalism are a broad category that include cases that would be explained by modern science in terms of bacterial infection. Modern science confirms that many of the bitter principles found in herbs have an antibacterial capacity that makes them suited for use in an infected, or  “hot”, condition.

It’s also important to note, however, that the chemical makeup of plants is complex enough that science is only beginning to scratch the surface of the way they interact with the body. Sometimes reducing the plant down to one or two chemicals that seem to be “active” is actually another oversimplification in itself. But it’s a start.

A great resource on the chemical science behind herbalism is the textbook Medical Herbalism by David Hoffman.

Misconception #4: Animals can tell what plants they need instinctively or by taste. So can I!

Reality: This is a really, really bad idea.

Yes, herbalists traditionally group herbs for use by taste. Herbs that were sweet, salty, bitter, or sour were believed to have an affinity for different body systems and conditions. (See number three, above.) However, when this myth comes up in the prepper community, people are usually talking about using taste and instinct to IDENTIFY random plants they find growing nearby and make use of them.

This is either used as an excuse to avoid learning how to identify plants safely out of laziness, or for the sake of some weird “I’m Very in Tune with my Body” bragging rights. Either way, considering that cattle poison themselves rather frequently (just ask any experienced rancher), and that most of the people who have this misconception can’t “intuitively” identify poison ivy, it’s safe to say that there is an incredibly dangerous disconnection here.

A great example here is water hemlock, which regularly poisons both people and livestock. It is a common wild plant in the carrot family, but a single bite of the root can kill an adult human, and cattle have died in less than fifteen minutes after ingesting more. The few people who have survived accidental ingestion have remarked that it’s quite pleasant tasting.

Exhibit A: If you don’t know what it is, don’t put it in your mouth. Period.

Misconception #5 I’ll Just Stock up on Field Guides and Books. If SHTF, I can Forage for Everything I Need.

Reality: People who don’t spend a lot of time in nature often don’t realize that it is a far cry from the mythical, unspoiled bounty of the collective imagination. Nature is not a grocery store.

For one thing, just like garden vegetables, wild herbs and plants have an ideal harvesting window that can vary by the length of their life cycle. We don’t experience this in our modern grocery stores because of worldwide shipping and greenhouse growing, but very few plants can be harvested year round. There’s almost nothing available from late fall through mid-spring in most natural settings.

Why do you think canning was invented?

Another problem with relying on books and planning to harvest “as needed” in a SHTF scenario is the potential difficulty in resource management – the threat of over harvesting. Stands of wild plants require special care to avoid wiping them out permanently in a single harvest. In some cases, this means harvesting less than 1/10 of the plants in an area that can be acres in size, and allowing rest years for the population to re-stabilize.

SHTF, you can bet no one is going to be concerned about whether they pick too much. This problem doesn’t even occur to most people now. “Poaching” and over harvesting for the commercial trade is an issue even without the desperation implied by a SHTF scenario.

During a major disruption, it’s possible that many areas would be stripped of available edible and medicinal plants in short order and take years to recover.

So, considering these five misconceptions, I think there are three very important things the prepper community needs to take into account if we want to consider herbalism as a viable skill for our personal and community toolkits.

For one thing: know thy plants! It’s better to know a few herbs very well than to have had a brush with many. Learn how to identify the herbs which you use the most in every stage of growth, and learn all of the small distinctions in use that set them apart from other herbs in the same category.

For another: get set now. Stock an herbal pantry with your most commonly used herbs in their dried, bulk form and in alcohol extracts. As a minimum, consider four oz of the dried herbs per person, stored in an airtight container away from light and temperature extremes. This will need to be replaced yearly.

Keep a minimum of four oz of each extract per person. These can last much longer (in some cases more than ten years!).

And last, whenever possible, learn to grow your own herbs. Even a small container garden on a patio can be used later to grow a larger garden if it becomes necessary.

By learning from these five misconceptions, not only do you have a much better chance of using herbs safely and effectively for health and well-being now, but also in scenarios where you are down to no other options.