Skip to content
139shares
Some of the links in this post may contain affiliate links for your convenience. As an Amazon associate I earn from qualifying purchases. 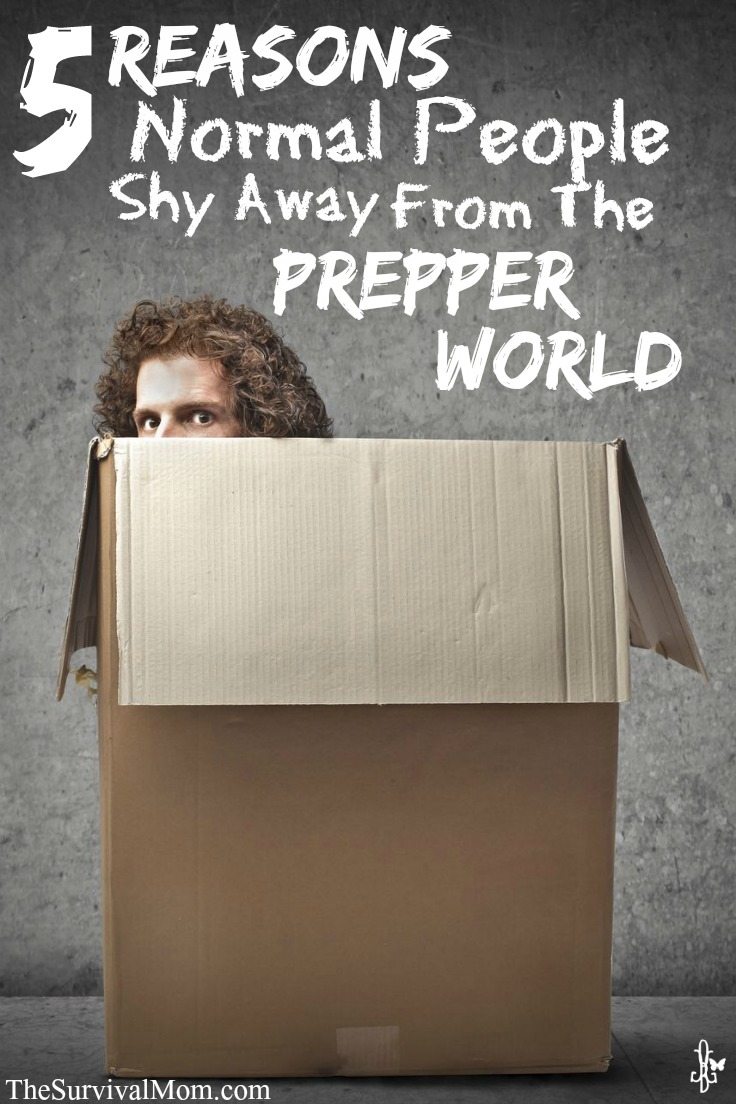 I don’t believe I’ve ever started an article with an apology, but before I go any further, my apologies to preppers for this headline! I’ve met hundreds of you over the past few years at expos and other events, and you are all so normal!

I hope my apology is accepted! Now on to my story.

Quite some time ago I recorded an episode of my podcast and included 6 lessons kids should learn from the Trayvon Martin case.  Lesson #6 was, “Be aware of how others perceive you,” and it included some great quotes from a black minister who works with kids of all races.

As I thought about perception, I remembered a conversation with an Oregon woman who displayed a dramatic negative reaction to the term, “bug out bag.”

“Don’t use that term!” she said. “It makes you sound like a crazy survivalist.”

Well, I’m not crazy and I don’t consider myself to be a survivalist in the traditional sense, but if we hope to draw others into the ranks of preparedness, our loved ones in particular, then maybe we should consider how others perceive us.

Here are a few reasons why I think “normal” people shy away from anything related to the prepper world.

1.  Our terminology has negative connotations

“Bug out bag” begs the question, “Exactly why do you think you have to bug out? Are you on the lam?”

“Bug out location” sounds a lot like a robber’s hideout or the stereotypical 500 square foot log cabin in the wilds of Idaho, home to toothless refugees from “Deliverance”.

“Bug out vehicle” — getaway car, anyone?

“C-Day” — Collapse Day, as in the day the United States of America collapses.

See what I mean? And I don’t think it’s a strike against anyone outside the prepper world who hears these terms and thinks, “What the heck??” If you’re not a religious person, this is akin to being around people who talk church-speak all the time. It can be a big turn-off.

2.  Ditto for our acronyms

In the real world, who talks like this?? If your friends need an acronym dictionary to figure out what you’re talking about, they may decide the prepper world is some sort of secret society with “special” handshakes and creepy initiation ceremonies.

3.   They think we’re too negative

When conversations naturally veer toward topics related to preparedness, that’s one thing, but if your stream of emails consist of doomsday alerts from Alex Jones and the like, they will begin to steer clear of you, guaranteed. I get those types of forwarded emails from my aunt, and even I don’t like them!

Let’s face it. “Doomsday Preppers” didn’t exactly do any favors for the prepping world. Too many of their preppers aren’t relate-able. Many are downright weird. If this is what your circle of friends and acquaintances see as the norm for preppers, do you blame them for not wanting to join the club?

Nearly every prepper website focuses on topics like pandemics, collapse of civilization, the U.S. becoming just like Somalia, FEMA body bags, guillotines…well, sometimes people just want to think about the fun they’re going to have this weekend at the bowling alley. Who wants to be around people who scare them all the time?

6.   They really don’t see the need to prepare

This one you can’t do anything about. Until a person is motivated by their own observations, they will likely not do anything. People believe their own data and will act accordingly, thus the popularity of Home Depot hours before the arrival of a hurricane! One of the very first YouTube videos I ever made was in response to folks who ask, “How can I get my family/loved ones to prepare?”

Now, in no way am I saying preppers are crazy and that we shouldn’t prepare. My point is to consider how others perceive us. If we come across as scary, obsessed, or weird, then it’s no wonder that they shy away from the prepper world when it’s possible that being prepared has been on their minds!

You can’t do anything about Doomsday Preppers or all the fear-filled websites out there, but you can demonstrate by words and actions what a rational, completely sane prepper looks like!