84shares
Some of the links in this post may contain affiliate links for your convenience. As an Amazon associate I earn from qualifying purchases.

“Once a disaster begins, people who have some familiarity with their disaster personalities have an advantage.” 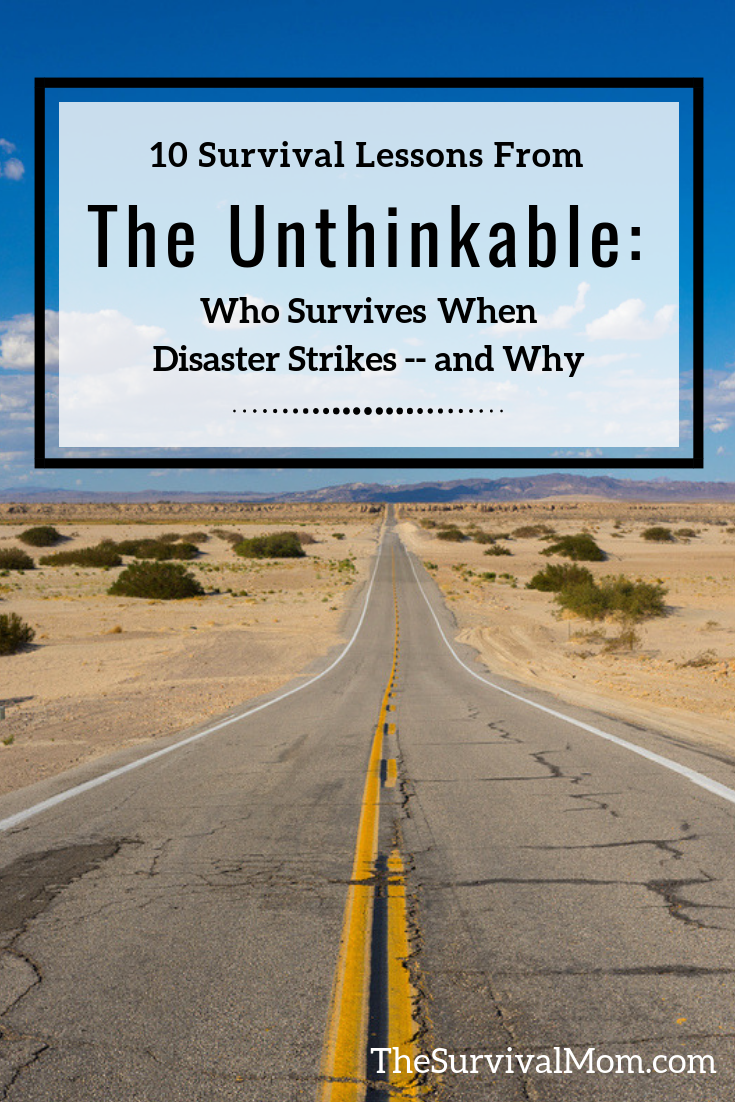 We have seen with our own eyes or on the news the unthinkable scenarios of terrorist attacks, earthquakes, fires, and tsunamis. Is there a way to know how you personally would react in these situations? How can you train yourself to give you the best chance of survival?

In The Unthinkable: Who Survives When Disaster Strikes – And Why, journalist Amanda Ripley investigated how humans respond to major disasters and what they did that gave them the ability to survive. She looks at the attacks on Sept. 11, 2001, hurricanes, being a hostage, a stampede, a school shooting and a plane crash all while exploring what made the difference between some people surviving and others not.

There are three main parts to a person’s reaction to a disaster – denial, deliberation and decision.

In the denial stage, people may gather belongings when they should evacuate. During deliberation, some people may let fear take a hold of them or just go with whatever the crowd is doing. When decision time comes, some people freeze up or panic while others act.

While The Unthinkable is full of survival tips, the best part of the book is examining your own tendencies and figuring out your own survival personality. Just knowing and being aware of how you would react in a disaster may give you enough insight to be someone who survives.

Here are 10 survival lessons from The Unthinkable

Below are 10 lessons I learned from reading the book along with a question or two to help you to examine your own survival personality.

Even in the midst of a disaster, many people don’t believe that whatever is happening could truly be happening to them. It hasn’t happened to anyone they know, so it can’t really be happening.

In a millisecond they are deep in denial.

This often leads people to wait until someone in authority tells them what to do or confirms or denies the severity of the event. In the World Trade Center Buildings on Sept. 11, 2001, there were cases of people wandering around their offices and packing up their bags before finally leaving the building.

They delayed leaving because of denial. For some people, though, denial can enable them to act because they would be paralyzed if they were faced with the awful reality of what was happening. Knowing if you would succumb to denial and/or delay your reaction to a disaster can help you think ahead to how you really should react.

Honestly, do you think a disaster could really happen to you? Would you take action right away or wait for authority to confirm the situation? Have you ever done a risk assessment to determine which disasters are most likely? Here’s a risk assessment worksheet for you to do just that.

Do you know if you live in a flood zone or near an earthquake fault? Many people in the New Madrid Fault Zone don’t have earthquake insurance, yet in 1811-12 there were three earthquakes in that area above a 7 magnitude.

The New Madrid Fault Zone is where Missouri, Arkansas, Illinois, Kentucky and Tennessee meet. An earthquake will happen again in that area, yet many people who live there don’t include it in their risk assessments because it hasn’t happened in the recent past.

The same holds true for residents in places that have 500-year floods. In 2011, floods covered major highways in Iowa, Missouri and Nebraska for several weeks. It was a known risk, but not expected by most people.

Do you not only know, but believe, the true risks you face where you live, work and travel?

3. Your response to fear is a critical factor

Fear can either cripple or energize people and the response can make a huge difference in survival.

The emotional response to a situation is often the first and biggest response. Just knowing this can give you and edge in a disaster. Recognizing emotion for what it is can allow a person to move on to evaluate the situation in a more orderly way and then figure out how to deal with the situation.

Our bodies have limited resources and when emotions are in control, it can be hard to do things as simple as putting on a life vest or finding an exit. Regain control by handling the fear. Learn this 16-second survival breathing technique to help your body and mind regain focus of your emotions so you’re more able to make rational, smart decisions.

Do you have a fight, freeze, or flight response when you’re afraid?

4. Some people are just different

Members of the specialized military units like Special Forces and Navy SEALS seem to be a different kind of human – and they actually mostly are in how their brains function in high-stress scenarios.

Most of these men tend to not dissociate during high stress events like most people do. A study confirmed this. Even the size of a person’s hippocampus (a part of the brain) can determine how a person is affected by trauma. It can be measured by an MRI. However, one consolation to biology is that most disasters happen to groups of people, so you don’t have to rely solely on yourself.

Do you dissociate often? This includes feeling like things happen in slow motion, that things are unreal or dreamlike or that you’re separated from what’s happening, like watching a movie.

Langi is a village on an island that faced the 2004 tsunami and everyone on it survived. They had learned from a 1907 tsunami how many people could die, so they always went to higher ground as a village any time there was an earthquake. Their practice saved their lives.

Groupthink can be good in situations like that – where responses to disasters are practiced, like fire and evacuation drills. However, when groups are responding blindly, without any rational thought or a trained leader, don’t blindly follow along. Offices that practiced drills on September 11 knew to evacuate going down the stairs. Offices that didn’t had some people climb up the stairs and become trapped.

Do you practice survival drills with your family, friends and neighbors? Here are some tips for safety drills for the whole family.

6. Panicking is the worst thing you can do

Stampedes causing many casualties can all be traced back to one person panicking. Panicking is when a person loses his or her sense of reality in a situation – it’s anxiety at its peak level.

Instead of feeling crowded when bumped in a large crowd, some people assume something bad is happening and act based on panic. Then a domino affect happens and a stampede begins when there was actually nothing wrong in the first place.

People who have high daily anxiety levels are more likely to panic. These people sometimes remove scuba masks when under water or oxygen masks in a fire. Try to focus on reality when feeling a sense of being trapped, helpless or alone.

How do you react when you feel trapped, helpless or alone? Those are the feelings that lead to panic. Here are safety tips for dealing with a panicky crowd and for avoiding panic yourself.

7. Our body’s instincts can take over

Knowing what our bodies can instinctively do during disasters can help you know what is happening and not get frightened by your own reactions.

During disasters, some people have gone temporarily blind, have lost control of bodily functions, have lost memories and have even faced paralysis. It happens in the animal kingdom as well. You may experience this or see other people experiencing this during a disaster. It can be life-saving during a school shooting or fatal in a fire. Know and watch, but don’t panic over it.

Can you see yourself losing a function of your body during a disaster? How would you react if you couldn’t see or move?

8. A hero is not always selfless

What makes someone act heroically while other people stand by and watch? It can actually be selfish motivations instead of selfless ones.

Some feel like that role is expected of them while other couldn’t live with themselves if they didn’t act that way. Some even save others because that’s what their parents would expect of them. Having a motivation to help others already in place, though, is what makes people act quickly to save others – even dive into freezing water to save plane crash victims.

What motivation do you have to help others? Is it good enough to risk your own life?

Practice is what can help overcome instincts that could lead you to do the wrong thing in a disaster. Practice can reduce the amount of time you spend in denial and delaying and get you to take action quicker. Practice will help you face reality and recognize your disaster personality.

What drills do you practice often? What ones do you need to practice?

10. You can change your disaster personality

The first step of changing anything is awareness. Take time to get to know who you are in a disaster and then identify ways you want to change. Taking a deep breath, saying a mantra, thinking of your family can all be tools to get you from one mindset to another. The more you learn and practice, the more you will feel in control of the

What is one thing you know you would like to change about your disaster personality?

Take a few minutes to read this article by the author of The Unthinkable and learn more about your disaster personality.