Skip to content
76 shares
Some of the links in this post may contain affiliate links for your convenience. As an Amazon associate I earn from qualifying purchases. 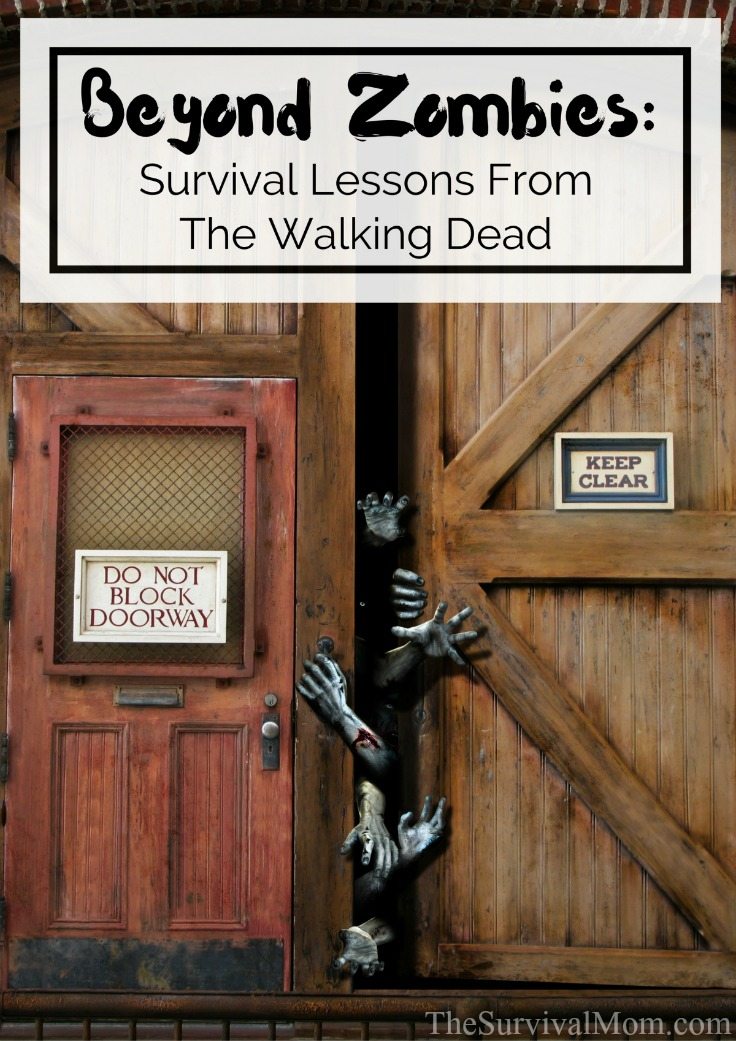 The Walking Dead is one of those rare TV shows that, like prepping, captures the zeitgeist of its time. No, not that the dead are actually rising, but rather that we cannot rely on the government to save us and the modern infrastructure we rely on so heavily is all too easily disrupted, broken, or even destroyed.

For those who haven’t watched the shows, TWD focuses more on living humans and their actions and interactions than with zombies, per se. Zombies are part of the setting, just as starships and other planets are the setting for science fiction movies. Just as Star Trek isn’t about the Enterprise itself, TWD isn’t about the undead except when it impacts the living. (TWD usually calls the undead “walkers” because they are the walking dead, but never, ever refers to them as zombies.)

You can survive anywhere – or die there

The series started in 2010 and has a recent spin-off called Fear the Walking Dead that takes place in Los Angeles and Baja California. The original series starts in Georgia, eventually moving to the DC suburbs. People who choose to bug in survive in all kinds of places on both coasts. Survivors are found in remote cabins and farms, but also in towns, cities, and even a prison. As time goes on, the survivors find walled suburbs and fortified towns built or modified to keep danger out.

Whether it’s Father Gabriel hiding in his isolated church with the windows boarded up or Tara and her family hiding in a small apartment building in a small town, those who survive are the ones who gathered supplies and locked themselves into a safe place and stayed there while the initial danger raged outside their doors. They didn’t get complacent, they didn’t take unnecessary risks, and they didn’t give up when things looked bad.

As the series continues, the main characters come across many places where those fortunate circumstances didn’t happen. In one suburb with a pre-apocalypse brick wall, the residents gathered supplies and locked themselves in for safety. Unfortunately, someone died and came back to life as a walker. Everyone in the community died because they assumed once they shut those gates, all was safe inside. They weren’t prepared to defend themselves from threats within their walls, to run, or even to hide somewhere else until they could escape.

It’s never “all safe”, not even before an apocalypse. Being physically and mentally capable of defending yourself and your family, and having the knowledge and equipment you need to do so, can make the difference between life and death in the worst disasters and between having looters, and worse, take what is yours in even a short-term situation, such as a localized natural disaster.

Mindset, knowledge, and the right goods don’t always trump location, but they can make the difference between a good outcome and a bad one in most places.

Rationing and bingeing lessons from TWD

Rationing is a logical action to take when food, water, and specific goods are scarce. If you are traveling, be careful how much water you drink because you never want to run out of water. (Also, carry a water filter and know how to find water using techniques like plant transpiration, but that’s a different topic.)

However, there are also times to binge. When you are next to a stream, purify the water and drink your fill. There is more water in that stream than you can carry, even if you wanted to. If you have a #10 can of chocolate pudding and will be moving on soon, go ahead and eat the whole thing because, really, who can carry a #10 can of pudding without spilling it and keep their eyes peeled for danger on the road? No one. Opportunities to really eat your fill may be rare, so enjoy the ones you find.

You never know how long you could be stuck, or when you will be forced to flee in a hurry. I lived in Los Angeles for years and was always struck by how little notice people were given to evacuate in front of forest fires or mudslides. Things can happen fast, so be prepared. In addition to your bug out bag, store some food in a grab-and-go container for an emergency evacuation. Those just-add-water meals in a lightweight bucket like this one, are easy to carry and the meals are super quick to prepare.

In one of the first episodes, the main group of characters are looking around a store in Atlanta, gathering things they need. It hasn’t been that long since things fell apart and they aren’t thinking long-term. No one grabs a hat to shade their head and neck, sunglasses, or even a backpack, nor do they grab spices and other food. It makes me a bits nuts every time I see it, but they are in the beginning of the end of their world and aren’t thinking ahead to what supplies will be most important.

If you are able to think about what you need long-term from the very start, like right now, you will end up in a much better place than those who don’t. That store is far from the last one these characters will enter during the series, but by the time they get there, most have been cleaned out by looters. In that first store, when they had the opportunity, the group left resources there that could have made their lives easier. They just weren’t thinking in terms of survival and priorities.

A time may come when you will need to travel through a dangerous area or neighborhood in order to acquire an item you need immediately, such as medication. You won’t need to cover yourself in zombie guts to walk through the undead, but dressing to blend in is a great way to remain safe if you have to make your way through a hostile crowd. Camouflage is your friend in a disaster.

If you’re wondering what the difference is between scavenging and plain old theft, read this.

When you meet new survivors, it’s almost a given that they won’t give you all the relevant information right away. Their priority is to protect themselves. In the second season of TWD, the group arrives at an operational CDC facility with plenty of food, comfortable beds, and hot showers. The lone remaining CDC staffer lets them in with a warning that they can’t leave.

This survivor neglects to mention the generators are almost out of diesel fuel and the system will automatically lock everything down and blow the place to kingdom come within twelve hours. The stress and loss destroyed him, and he truly believed all was already lost, so it didn’t really matter. By withholding some pretty crucial information it was too late, the group almost died as a result.

Of course, there are times when other survivors provide helpful information. One survivor, Aaron directs the group to safe roads and provides directions to the walled town he lives in.

One thing is for sure, reliable information is going to be one of the first casualties in a big enough crisis and being able to contact others via ham radio or have a heavy duty, reliable shortwave radio on hand (with extra batteries!), will go a long way in providing not just information but peace of mind when you know what’s going on “out there”.

Sasha laying on a pit of dead bodies. Father Gabriel’s guilt over not letting his flock into the church with him. Rick hallucinating phone calls from his dead wife. Shane.

The end of the world as we know it is stressful. Some people don’t show the worst effects for longer than others, but it hits everyone eventually. Even the strongest reach their breaking point eventually, and PTSD can become the norm if the situation goes on long enough. (There is a theory that one reason the wild west was so wild was because a lot of Civil War vets were suffering from PTSD.)

It is important to look after your own mental health and that of those around you. Getting caught up in survival to the point that you neglect your mental health is all too easy. Don’t! No matter how hard it is, find time to take a break and to enjoy any family and loved ones around you.  Know the physical and emotional limits for you and your loved ones. When you have reached them, tell those with you that need help before you fall apart. If you see others reaching their limit, help them if you can, even if they haven’t asked.

During stressful times, even when you’re not hiding in abandoned buildings on the lookout for walkers, you might want to treat yourself and your loved ones to a favorite comfort food, or pull out a hidden package of cookies. These can be a good bribe to keep kids, especially, quiet and on task. As we learn in TWD, noise discipline can be one of the biggest factors in some survival scenarios.

The important concept is to monitor yourself and members of your group for signs of PTSD and take steps to avert it, if possible. This book explains how to do that in more detail.

I’ve watched this series from the beginning. Yes, it’s unrealistic in that it’s about the undead, but it is hugely popular among preppers, in part, because of the survival lessons it teaches. Danger comes in many forms. A crying child or lowing herd of cattle can bring unwanted attention and danger. House windows and doors are easily broken. But the two things that bring the most danger are panic and carelessness.

What lessons have you learned from The Walking Dead? 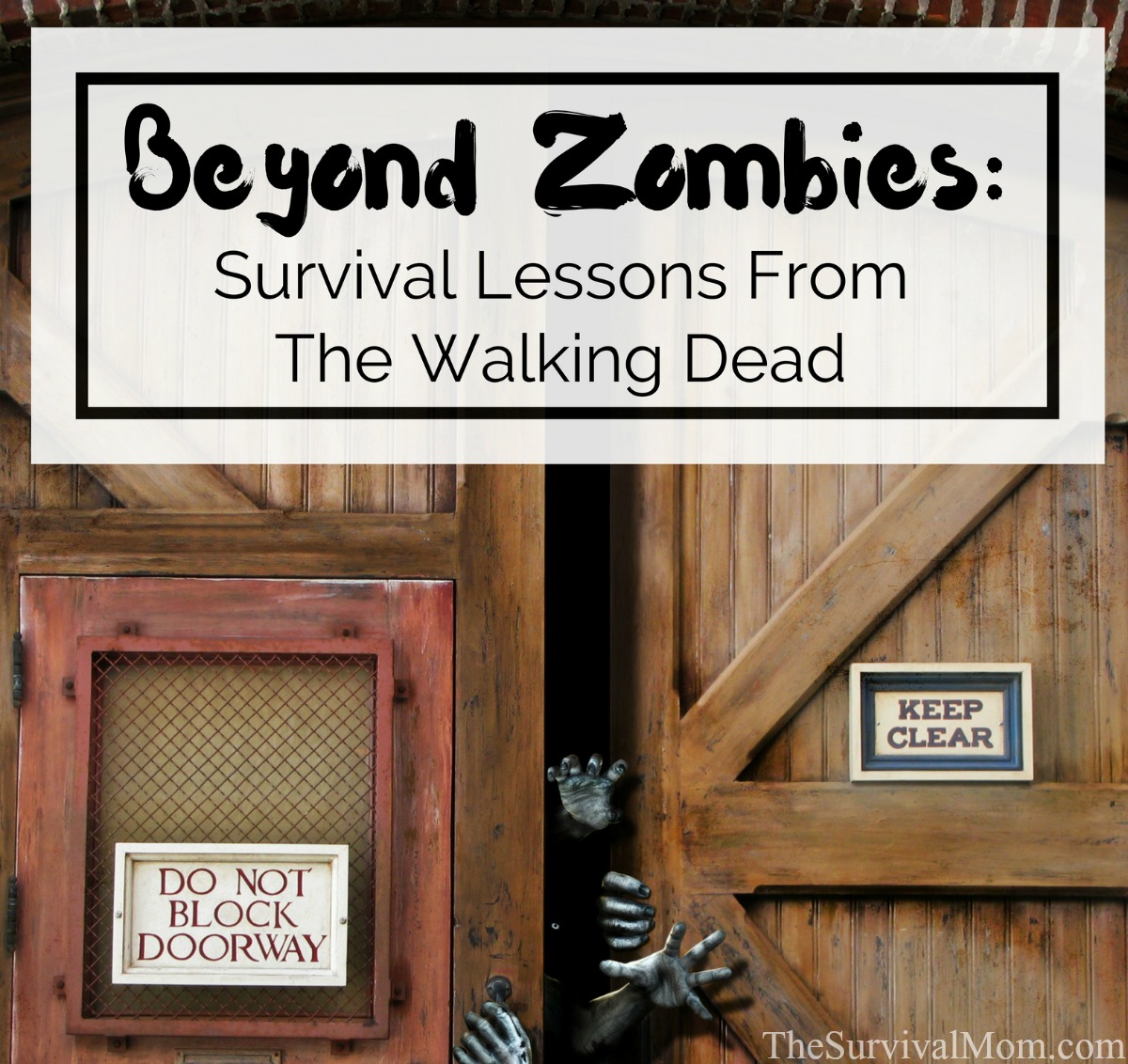 22 thoughts on “Beyond Zombies: Survival Lessons From The Walking Dead”