Skip to content
85 shares
Some of the links in this post may contain affiliate links for your convenience. As an Amazon associate I earn from qualifying purchases. 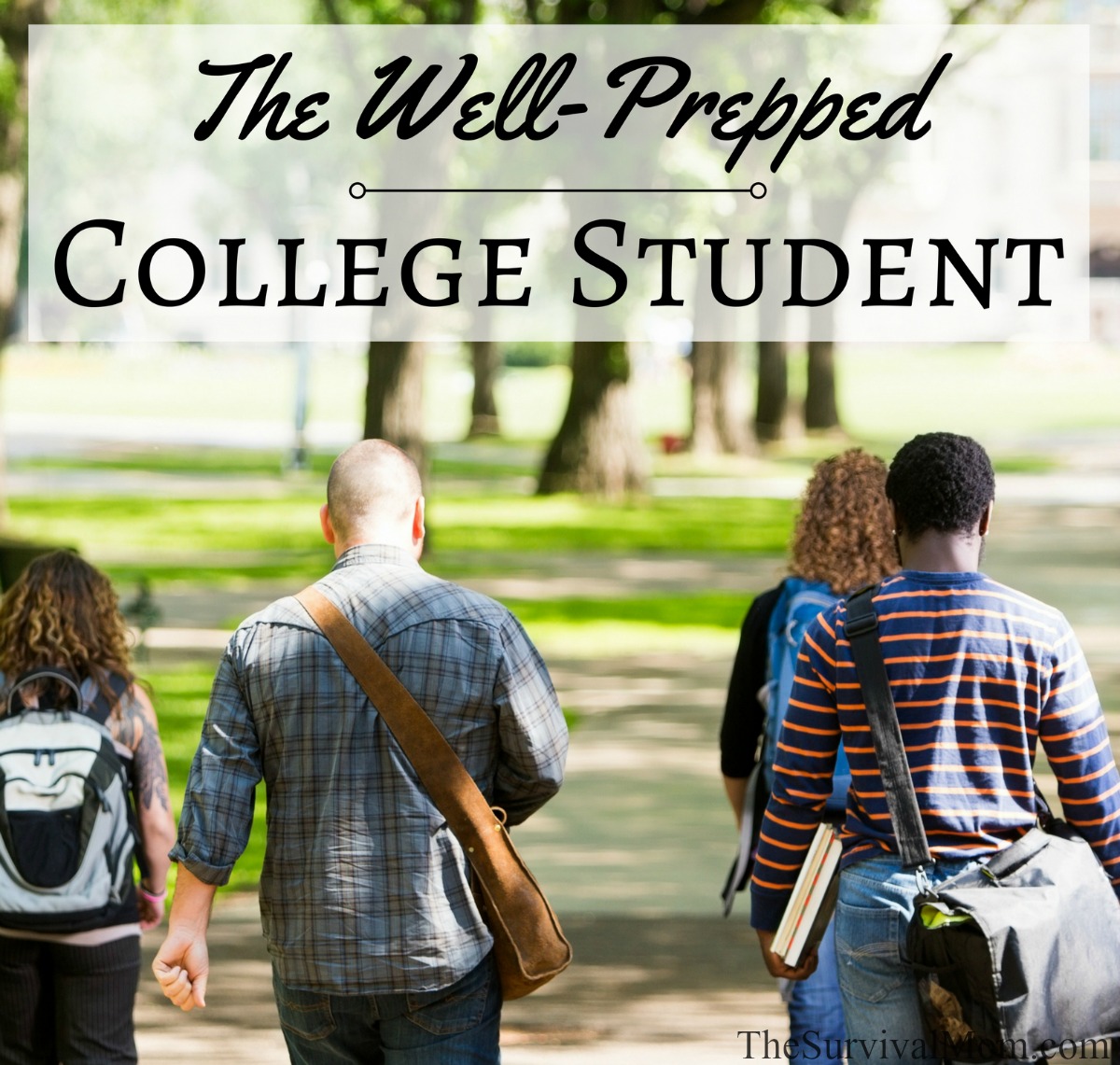 Having the kids away from home without parents is inevitable and a source of worry for all parents. For preppers, there are even more worries because your home is likely prepared for any number of disaster scenarios. If your kid is already preparedness-minded, getting them into a prepper mode for college, or just moving out, will be easy because they share your point of view. Even kids who may think you’re daft for preparing, though, can also be prepped with a few handy supplies.

College students need more than one emergency bag because they need one for their room and one for their car, if they have one, or for travel home if they don’t. In addition, they need a car emergency kit with jumper cables, a flare, and other basic items that they may not have yet, especially if they have never driven far from home before. If they travel home another way (train, airplane, carpool), modify this list of supplies to suit those needs and be sure to consider TSA requirements.

For a college student, I strongly recommend matches over a lighter because it is very obvious when you are almost out of matches but they might not notice that a lighter is damaged or low on fluid.

Quik Clot is not a “basic” item to most people, but the reality is that a car accident is the most likely emergency a car-driving young person will face and having a pack or two could quite literally save a life. Having had a friend die from bleeding out in an accident, this is a bit of a personal quirk, but I strongly encourage you to include it, and possibly even a tourniquet. These have come back into favor in a severe injury case, where the choice is either to save a limb or save a life. More information about tourniquet use is here.

It is a rare place, in this day and age, that emergency vehicles can’t reach in 10-30 minutes, but having those two items to reduce massive blood loss in that time could make a critical difference.

I also keep EMT shears in my car, and I love them. Your college student probably will as well because they are GREAT for cutting off the wristbands that you can get at special events. If you can find a stuffable sleeping bag or down jacket to include, that would be great because even big kids (young adults) tend to go out without a warm coat. Additional optional items include:

Include in the kit better food than standard emergency rations because they are less likely to turn up their noses and go hungry if they like the food. (Yes, in a real emergency they’ll eat anything – but it’s your child. Do you really want them going hungry because you gave them a beef stroganoff and they hate mushrooms?)

If your student is leery of GMO ingredients and perfers more natural meals, check out these.

The suggested items in this bag are in addition to the car bag. This kit should include a safe way to heat food, a mess kit they aren’t likely to pull out to use in their room (an empty plastic container with disposable utensils is good), and a face mask to help reduce viral infections.

College kids may be far from home, but they’ll still get sick and injured. Travel size bottles of ibuprofen, aspirin, Benadryl, etc. only contain a few pills and a big wad of cotton, but small bottles are better suited for small spaces. You can fill them from larger bottles.

Think about what medicines your child routinely needs at home.

This may seem like overkill, but you won’t be there if, and when, they get sick. Include Benadryl even if your child doesn’t have any known allergies because they will be encountering new food and new airborne allergens.

In college, I remember going to work at a temp job with a fever that was easily 103 because the office had air conditioning, my apartment didn’t, and it never even occurred to me or my roommates that I could get medicine to reduce my fever. (I also lacked a thermometer.) If I had had medicine in my room, I would have taken it and stayed home.

They will need bandages of all sizes including knuckle and large sizes, and at least one Ace-style bandage, preferably two. A topical antibacterial for cuts should also be included. Neosporin is popular, but raw honey is increasingly popular and at least as effective.

Best of luck keeping emergency food and water in a college student’s room, especially food. The reality is that they will end up eating it as a snack or because they either don’t want to go to the dining hall or are rushing to meet a forgotten deadline.  That doesn’t mean impossible, just challenging. On the other hand, if you restock them every time you visit, at least you know they have something other than (or in addition to) Ramen for those meals.

If they are like most kids, especially freshman, they will be on a meal plan and it will not allow them to take food back to their room from any all-you-can-eat buffets. (Again, good luck with that.) However, most will have other options that allow them to take their food with them, possibly including pre-packed options. If there is a true emergency and they need to evacuate, using their meal plan to get as much food as they can carry (and their plan allows) from one of those locations right before they leave is a smart plan.

A turkey sandwich won’t last long on a hot day, but it will last a lot longer when it’s cool outside or an insulated bag is used to carry it. If they have a supply of food, then they can share with friends going in the same direction. Easy to carry fruit, especially apples, is readily available in meal lines, as are oatmeal, breakfast cereal, and assorted meal replacement bars.

A stash of canned food under the bed isn’t a bad idea, either.

Many young people go to college hours from home. Living in a different time zone isn’t unusual, and some students spend time abroad. All of this means they’re vulnerable to new types of threats. The new location may bring new natural disasters as well, and even the ones they grew up with may require a different response, especially if the new area is lot more urban or rural. Making sure they know the basics of how to handle these disasters should be your first step, and you should start working on it with them as soon as they graduate from high school, if not sooner.

The big headline-inducing disasters are the ones that come to mind first. If your child is moving to the Gulf Coast, hurricanes pop to mind. If they are going to California, then earthquakes bcome a new concern. Did you ever consider what they will do if there is a mudslide near their new home? Or a wildfire or flooding shuts down the highway? You may live in an area with four seasons, but if they go several hours farther north, are they really equipped (in gear and mindset) for how much colder the winter can be?

It is well beyond the scope of a single post to cover every possible natural disaster, but spend a little time searching for information about the area where they will be living. A chart of average monthly temps will give some good information, but a search on “school closings” for the local school district will tell you much more of what you need to know than simply looking at a map. Schools, especially elementary schools, close whenever the weather is considered too dangerous to drive or be out in. If the only closure was for weather at -15 degrees, that is a very different situation than a school district that closed for “poor air quality” due to wildfires or one that closed for excessive cold at 5 degrees (above zero) and heavy snow (4″).

College students need an evacuation plan beyond a mere dorm evacuation in the case of a fire. If your child had been in New Orleans when Katrina aproached or in Northridge when the quake hit, would they have known where to go and how to get there? Probably not. This book is a one-stop-shop for everything you need to know when planning for an evacuation.

Work with your student to create a plan for them to get home if they have to evacuate ahead of an impending disaster and alternate routes to use if one is no longer safe. Laminate the evacuation routes and put it in their emergency (car) bag, along with physical maps (not electronic ones) for their entire route. They will undoubtedly think they don’t need paper maps because they have an app on their phone and GPS, but those can go down, or run out of batteries, in an emergency.

AAA provides free state, area, and city maps to their members. These are great for planning evacuation routes, as is a printed version of a MapQuest or other online set of directions. A topographic map is an outstanding resource for this because it shows terrain features as well as parks, campgrounds, and more. If there are places for them to stop en route, friends and family, campgrounds, public parks, etc., be sure to mark them on the map and talk about them in advance with your child. They may not remember, but at least you’ve tried. These NatGeo topographic maps are free and can easily be printed.

Before you laminate the map, write down how they should communicate with you, as described in this article about establishing a Disaster Communications Hub. Cell lines are usually clogged in an emergency. Text messages are far easier to get through, but I know I wouldn’t want to be checking every cell phone in the house for possible text messages from an out of state child. Telling them a specific phone to text, and an alternate if no one replies within a set time (ten minutes, an  hour, six hours – whatever you agree is reasonable) should make it easier to get in contact.

Just because our kids go off to college or move out on their own, doesn’t mean we ever stop worrying about them. If they’re prepped for a variety of emergencies, mom and dad will be able to rest just a little easier. 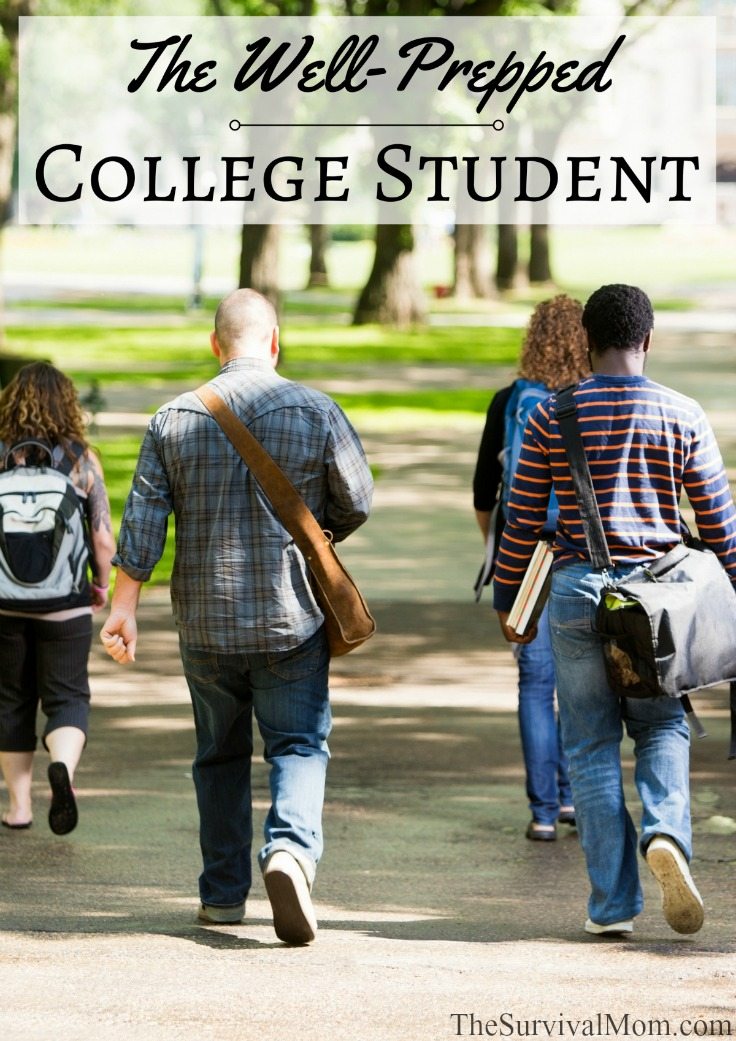 2 thoughts on “The Well-Prepped College Student”