Skip to content
3 shares
Some of the links in this post may contain affiliate links for your convenience. As an Amazon associate I earn from qualifying purchases. 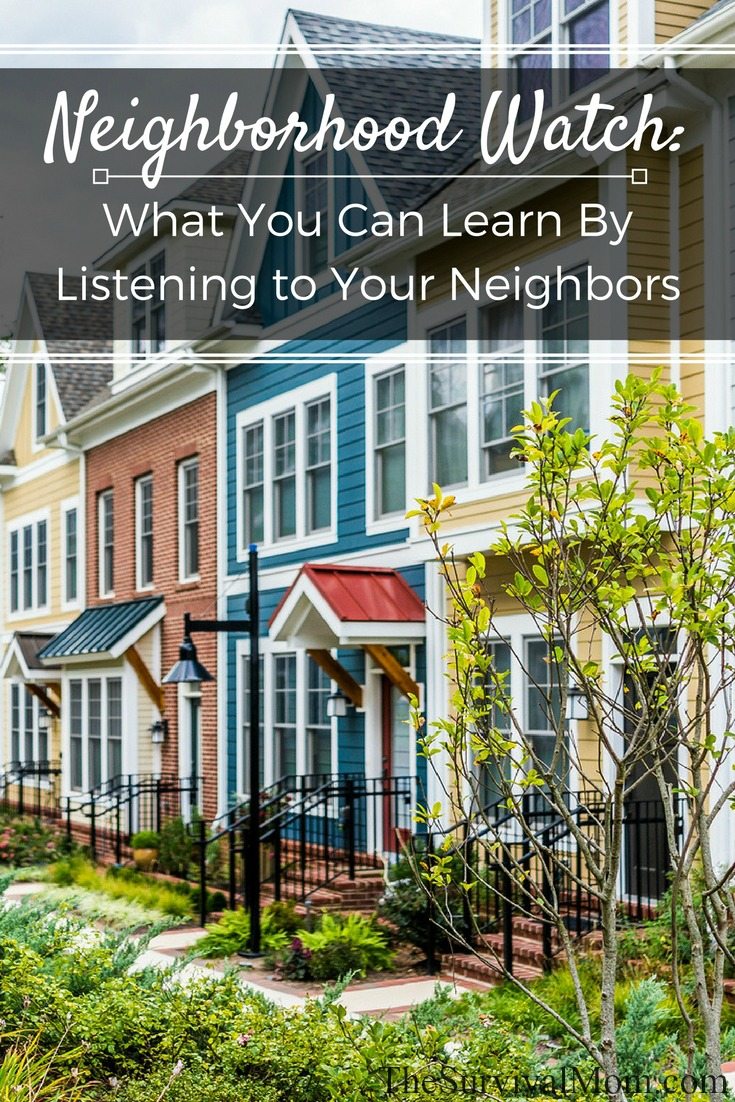 Our metro area already exceeded last year’s murder rate by mid-year. Three of those deaths were in the neighborhood just one over from mine. While the numbers aren’t high compared to big cities, the percentage increase is staggering. So when our neighborhood began observing strange vehicles and odd behavior on our street, neighbors started to compare notes and make a plan.

As I talked with people on my street in small groups or individually I was struck by the varied reactions of my immediate neighbors, some of whom I’ve known for years. Now, this is a situation we are facing in an intact society, but these responses could also be indicative of how people would react in a disaster situation. While I’ve paraphrased their words and changed names, there are actual people behind each of these reactions, so it was a very valuable insight of what my particular neighbors might be like in a crisis. Maybe yours, too.

Jesse suggested we all put security signs in our front yards whether or not we had security systems. In our locale, this wasn’t a bad idea. Would-be criminals might pause before committing crimes where they would potentially be recorded and give us the appearance, of active security.  While in a survival situation the less attention you can draw to your group, probably the better. Jesse is at least willing to take immediate action of some kind. So perhaps in an emergency, he could be in charge of some aspect of organizing or providing security.

Margaret suggested we immediately contact the police and let them handle it. In our circumstance, this is also an appropriate response, even though it had already been pointed out that we had virtually no solid information to give them yet.  A few years ago, this neighborhood had a rash of car break-ins, most of which were reported to the police. Without a description of any related vehicles or persons, the police were unable to solve these crimes. They just sent a letter out to those affected essentially closing the case.  With this as history for our area, most of the neighbors felt it was unlikely the police could or would be able to do much at this stage. In a survival situation, it’s also highly unlikely that the authorities would be available. They might not be able to get to an area or may be overwhelmed, or communications would be affected. Our neighborhood may be essentially responsible for itself. So Margaret has shown that she would rather let someone else be in charge. In a survival situation, the leader might simply assign her to the necessary tasks.

Steve and Addie each suggested collecting more information, with the goal of being able to contact the authorities with concrete information in the near future. Extra vigilance was definitely called for. In fact, this is ultimately what our neighborhood decided to do. These neighbors are concerned, but not quite ready to take action. In a survival situation, as well, extra vigilance is vital. But an action plan may have to be more hands-on, involving people in the neighborhood group.

Both Cliff and Austin reminded their wives and daughters on the location of their personal firearms. In our situation, this is a very good precaution. After all, there have been actual murders just one neighborhood over! This type of defense would be invaluable. These neighbors understand that the potential is there for something serious to happen. They have obviously thought through some worse-case scenarios. Austin and Cliff will probably need the least convincing to take action and could be considered for leadership roles in an actual emergency.

No interest or action

Alan and Esther just said, “I’ll keep an eye out,” and Carol only said “Thanks.”  And that’s probably fine. Most other neighbors were at least mildly concerned and several were ready to take some action. In a survival situation, though, these neighbors may be good helpers who just need some direction. But they may also turn out to be free-loaders. Your group may need to make very clear that everyone has to participate in order to receive the benefits of a group, such as increased security or shared food.

But the response that disheartened me the most was from Paula, who said something like, “Oh yeah that’s been going on for a while now.” She had apparently observed the odd behavior longer than anyone else, but hadn’t done or said anything about it!  This probably increased the odds of something bad happening before anyone else was aware there was a problem. In a survival situation, however, this person could mean disaster for the safety of your group!  If I was at all in charge of assigning roles, I would have Paula doing physical labor or any other repetitive tasks with plenty of oversight. I wouldn’t let her take a single overnight watch shift, or do anything remotely related to the security or possibly decision-making of the group. That may sound harsh, but this type of person has already shown themselves to be uninterested in the safety or welfare of others. There will be many other lives riding on such security and decisions in a survival situation.

Take Charge and Make a Plan

There’s a natural leader in every group. For our situation, it was merely convenient to make Steve the point person and put Beth in charge of future neighborhood communications. In a survival situation,  making decisions and quickly implementing a plan could the difference between life and death. This neighbor might have to be… YOU. Are you prepared to take charge? You may be the only one in a disaster situation that has thought through the implications of the grid going down or looters after a natural disaster. Your mental preparation may mean that you see what’s coming next while others are still coming to terms with whatever’s just happened.

Keep in mind is that you will have a diverse group of personalities, experiences, and political beliefs. It is very unlikely that everyone will regard the level of danger with the same gravity. It is also unlikely that everyone will agree to the necessity for certain actions. Maintaining a good neighborly relationship now will go a long way if we have to navigate a frightening situation together in the future.

Another other thing that these responses made clear to me is that it’s important to develop a group or network of other preppers in your immediate area. I’m not talking about online, or in your state, or even your metro area. Find people who actually live within 6 blocks of you that share your preparedness mindset. People that you could walk to, transfer supplies from or share watch duties within the case of local emergency. Consider inviting everyone to your place for a potluck, or rent a park shelter for a cookout, and start building this community now.

TIP- Here are 7 scenarios that kids of all ages should be aware of and should know how to respond.

Take a few moments to sketch out your immediate neighborhood. What might various reactions be? What might be a good role for each of them in a local emergency? What can you do today to maintain good neighborly relations? Who is physically nearby that would make your go-to prepper group? 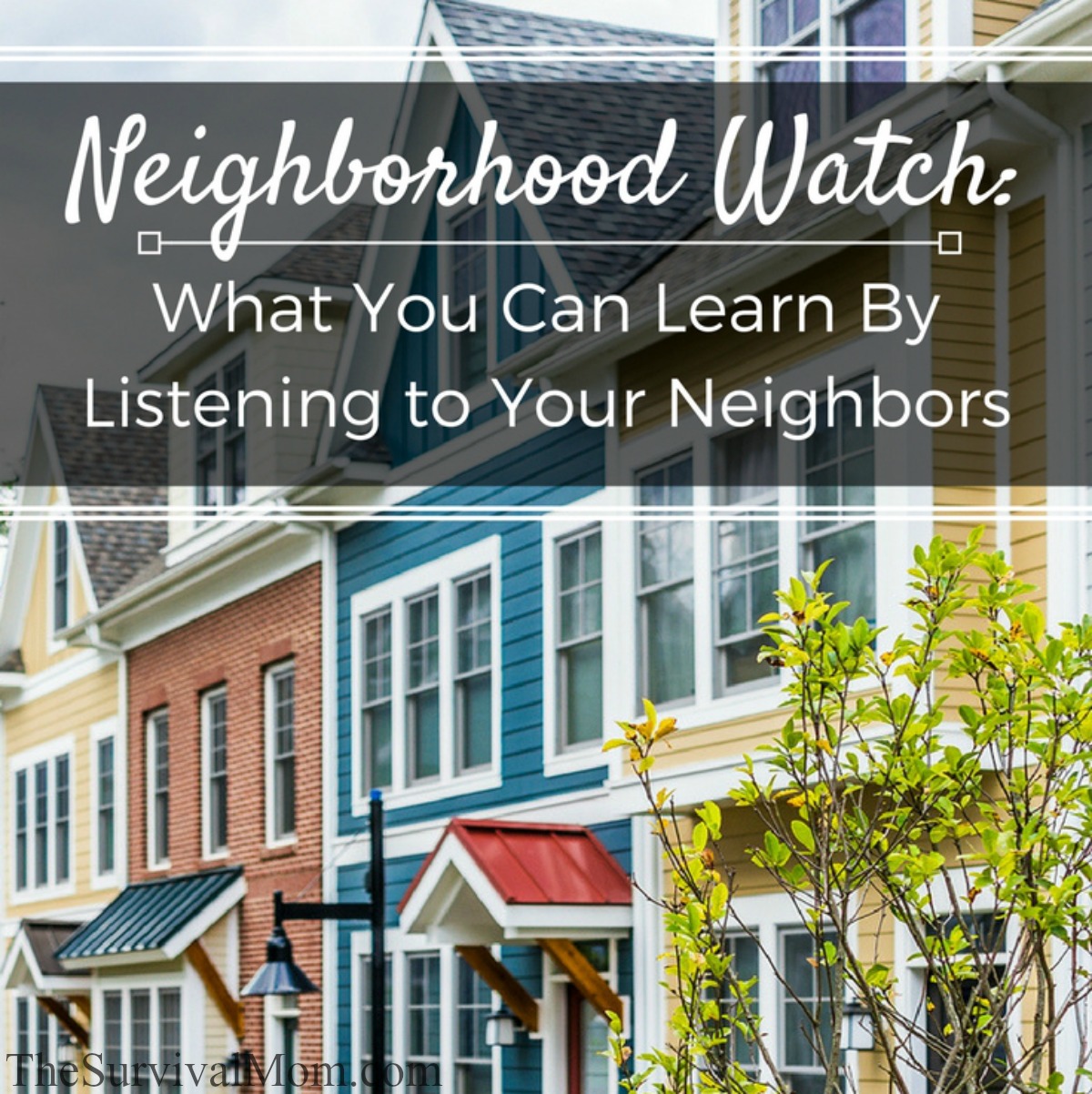 2 thoughts on “Neighborhood Watch: What You Can Learn By Listening To Your Neighbors”