Skip to content
965 shares
Some of the links in this post may contain affiliate links for your convenience. As an Amazon associate I earn from qualifying purchases. 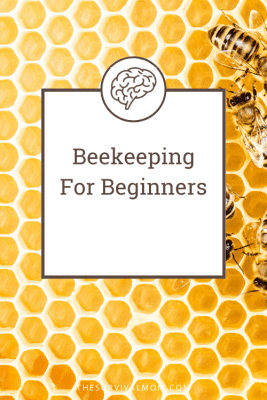 For some time, I’ve been wanting to start a beehive. I really enjoy the local honey and use it in many recipes. I also use it medicinally for soothing a sore throat and applying over cuts and scrapes. So, in preparation for this new venture, I joined the local Beekeeping chapter in Northwest Indiana.

I began attending meetings to learn more about what I was getting myself into. I was very impressed with how helpful everyone was and they really enjoyed teaching novices like myself. The club president stated at my first meeting that if we didn’t want to actively work with bees to ensure their survival, we should leave now.

This is not just a hobby to them, it is about survival. They want to increase our bee population, which has been reduced by mites, pesticides, and colony collapse syndrome. I took their advice seriously. If we lose our pollinators, we lose our crops. It won’t take long before mass starvation becomes a reality. 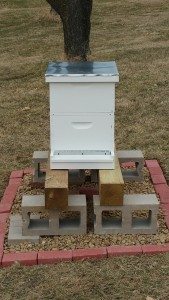 I got my basic setup as a Christmas gift from my husband. It came unassembled, but my husband took care of building the boxes while I built the small “frames” with a foundation that slide into each box. After it was built, we ended up with (starting from top to bottom) a bottom board, an “Entrance Reducer”, two “Deep” boxes, a metal frame called a “Queen Excluder”, two “Supers”, an Inner Cover, and an outer cover.

When the weather was warm enough, we cleared some grass and covered the spot with a landscaping barrier. We spread pea gravel on top before my husband built and installed a stand to place the beehive on. The simple stand was four cement blocks and two wooden beams. We added some decorative brick to keep the pea gravel in place. We also made a road trip to buy a beekeeping jacket, gloves, veil, smoker, and the miscellaneous tools we would need later.

What gear is actually necessary?

Like any hobby, beekeeping can be as inexpensive or costly as you like. Beekeeping suits, for example, can be purchased at Tractor Supply for about $70 for a full-length suit. Here is a cheaper example from Amazon.

However, unless you are allergic to bee stings or just want extra protection, a jacket with an attached hood is a lot cooler and half the price.

Some suits are made from heavy-duty cotton fabric while the more expensive ones offer better protection and allow for more airflow. You’ll appreciate that, especially if you live in a hot climate. Just 15 or 20 minutes out in the sun wearing a full-length bee suit can be suffocating. 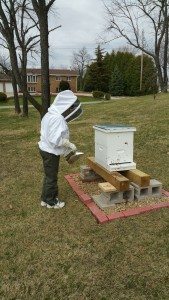 Very experienced beekeepers often don’t wear any type of protective gear, but that isn’t what I would recommend!

As mentioned, elbow-length gloves with elasticized bands at the top of each glove provide sturdy protection for your hands while the elastic band prevents bees from crawling up your arm! If you’re on a super-tight budget, you could use regular work gloves with elastic or rubber bands at the wrists to provide that same protection, but over time, investing in beekeeping gloves is worth the investment.

Other than protective wear, you’ll need a sturdy tool to loosen the frames as they become sticky and heavy with honey and bees. A complete tool kit like this one has more than you need as a beginner, but it’s handy to have the extra tools if you need them.

Even if you can join a local group of beekeepers, and that really is the best way to learn and have support if you need troubleshooting, The Beekeeper’s Bible is my #1 source of reliable information. Even before we got into beekeeping, friends with bees told me to get that book!

Finally, another great source of information and support can be found on social media. There are many beekeeping groups on Facebook, such as Beekeeping for Beginners, MeWe (there’s a really active beekeeping group there simply called “Beekeeping”), and on Gab. Be warned that not every beekeeper agrees on everything, so you’ll get different points of view on topics like queen bee excludes and feeding bees during the winter!

Oh, if anyone in the family or your group of friends is allergic to bee stings, ask your doctor about getting a prescription for an epi-pen. With my insurance, this only cost $10, but I imagine that prices will vary. I’m keeping the epi-pen in a cupboard close to our backdoor where it can be found quickly in case it’s ever needed.

Getting Started with Actual Bees

We placed an order with our beekeeping club because they order in bulk for the members. We ordered one box with three pounds of bees and a mated Queen. We took delivery in early April on a mild day with little wind. Just prior to their arrival, I sprayed sugar water onto the foundations to entice them to stay.

The Queen was in a little separate box by herself within the box of bees. Each end of her cage had a little plug in it, which we removed and replaced with a mini marshmallow. This allows the bees to get used to her pheromones before they “eat” their way in and release her. Once the marshmallows were in, we placed her cage between two frames and secured it in place.

We removed several other frames and placed the entire box of bees inside the hive…very gently. Then we covered it with the inner cover, and inverted a bucket with sugar water over that. Two days later, the bees had eaten their way through the marshmallows and released the Queen.  All was well.

About a month later, we added a second “Deep” box to accommodate the growing population. When it started filling up, I added the metal Queen Excluder frame and a “Super”. The Excluder prevents the Queen from laying brood on the third level, but the workers can fit through the openings and store honey there. That box, the Super, was going to be MY honey. They got the bottom two boxes. I thought I would open up the hive in a week or so and see how things were progressing.

Before the first full week was over my husband told me, “The bees are swarming!”

Their population grew too swiftly and they outgrew their home. (Or, you could say, I dropped the ball and wasn’t prepared for this). The workers had made a new Queen cell and the old Queen took off with half the workers. When the new Queen was emerging, we had a month of daily rain. Not just rain, but torrential downpours. I didn’t know this at the time, but it was going to become a big problem.

I had begun the habit of opening the hive every week and noticed the third box, my Super, wasn’t getting filled with honey. One of my beekeeping club friends, Floyd, came out to take a look. We found half a frame of “capped brood” which are baby bees about 18 days old. Then we hunted around and found larva about a week old and only 3-4 newly laid eggs. Floyd said my Queen probably  didn’t get a chance to breed well due to the weather, so she was becoming infertile.

This meant that I had to re-queen my hive. If this doesn’t happen, the old queen will just lay sterile eggs, and the result will be a colony of only drones. To get the new queen, I just located a beekeeper about 2 hours from me. I’m heading there next week. Then I will begin the process all over again!

I will need to go back in the hive, find the old queen, remove her, and set the new caged Queen in the hive to let the bees get used to her. Yes, there will be more mini marshmallow plugs going in her little cage. Hopefully, all the work we have put into this project will eventually bear fruit. I mean, honey.

I’m still glad I got this project started. There is no way to learn everything before you actually do something. Learn as you go, and join local clubs and organizations to find the help you will need. Someday, sooner than you think, you will be the experienced one giving back and helping newbies learn!

Without Floyd’s help, I would have lost the hive. If I’m lucky, I will get some honey in the fall, but that’s not my main concern right now. I want to make sure they survive and if I have to wait until next year for honey, so be it.

This learning curve is why it’s so important to prep BEFORE a disaster occurs. I want to know how to raise bees in case a disaster or other event occurs. I’ll have an additional food source, as well as wax for making candles, deodorant, and ointments. It’s a great barter item, too.

16 thoughts on “Beekeeping For Beginners”