18shares
Some of the links in this post may contain affiliate links for your convenience. As an Amazon associate I earn from qualifying purchases.

We took the kids to the shooting range again yesterday, along with a reporter and photographer from the Arizona Republic, and once more I felt so grateful that my kids are confident, yet cautious, around guns.  Just the day before, a 10 year-old boy in our city accidentally shot himself with his stepfather’s handgun and died.  I don’t know the family, nor do I have any details about the tragic incident, but I have to wonder if the young man had ever been educated in gun safety or if he had ever had the chance to learn to shoot.

From the beginning, my husband and I wanted our kids to know two very important things about guns.

Remember the scene in, “The Sixth Sense”, when a boy says to the main character, “Wanna see my dad’s gun?”  He turns toward the bedroom and you see a huge gunshot wound in the side of his head.  In our home, we don’t want guns to be mysterious forbidden fruit.  After all, what is more alluring to a child?  Something they’re not allowed to see and touch or something so ordinary that it’s no big deal? 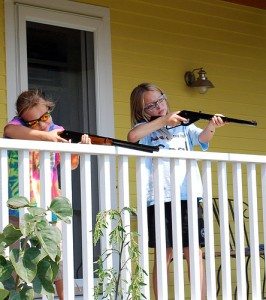 I am not precluding the possibility of either of our children doing something stupid someday while around a firearm, but if they do, it certainly won’t be because they view a gun as something exciting and glamorous.  Any parent who thinks their kids don’t watch and plan for an opportune time to do something sneaky behind their backs isn’t living in the same world as me!  The last thing I want my kids to do is wait until we are gone from home and then seek out a hidden gun to, “play with.”

So, our kids have been taught how to shoot.  Both have shot a thousand rounds or more from their .22 rifles.  Daughter is sniper material.  Son just loves using his trigger finger and hits the target on occasion and both are happy to leave our firearms alone once we get home.  In fact, both have been known to groan and roll their eyes when they see Dad loading up the truck for another trip to the range.

The NRA is a great resource for materials to teach your child gun safety, and their Eddie Eagle GunSafe Program is available to individuals, schools, and groups and priced affordably.  Eddie Eagle’s four basic rules for kids to remember if they ever see a gun are:

In addition to training and practice, our guns are kept secured in a safe place away from the kids.  We believe in layers of security, and education is just one layer.

The second thing our kids have learned about guns is,

A gun can take a life.  That’s a huge deal, the biggest, really, and it makes owning a firearm a serious responsibility.  Our kids have been taught to never put their finger on the trigger until they are ready to shoot.  They know to always keep the barrel of the gun pointed in a safe direction, which is never at another person, and guns remain unloaded until we are actually at the range.

A challenge parents face in this process is helping kids understand the difference between the glorified gun fights they see on TV and in the movies and what a real gun can do to a person.  When a person is shot, there is no, “Take two!”  The injured person doesn’t pop up so they can appear in the next scene.  Gunshot injuries are real, painful, and can cause massive injuries and death.