Skip to content
252shares
Some of the links in this post may contain affiliate links for your convenience. As an Amazon associate I earn from qualifying purchases. 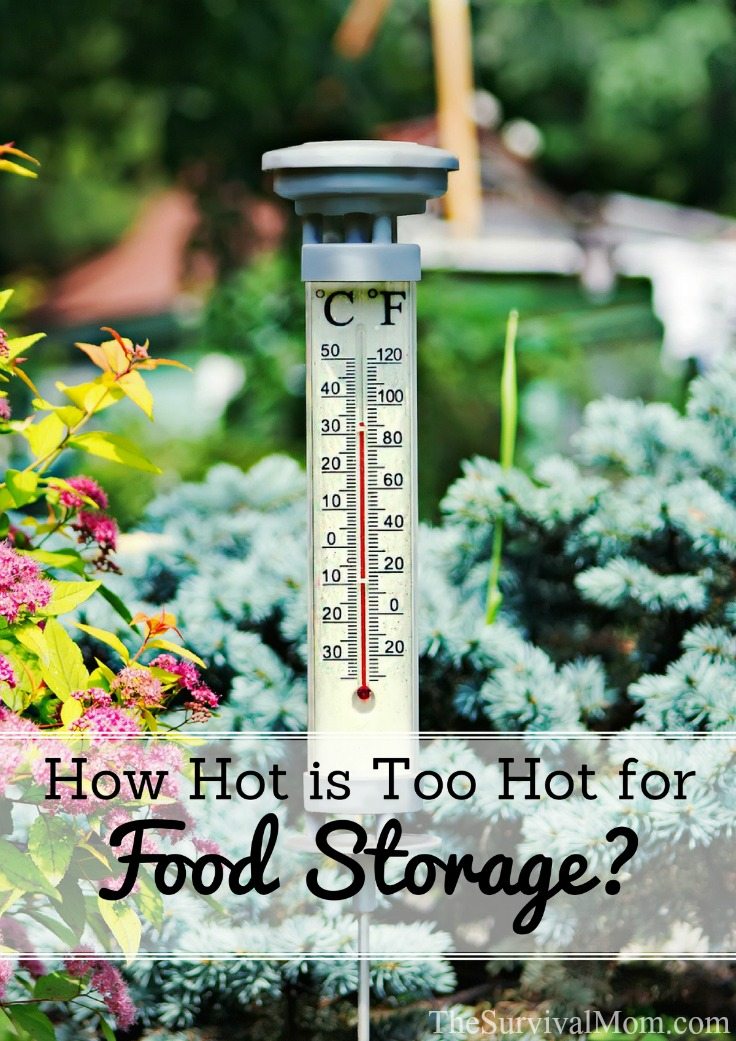 Starting in mid-May, my email box begins filling up with questions about storing food in hot weather. There’s always a new heat wave in the news, and that gets people worried because food is particularly susceptible to the effects of high temperatures. In fact, out of all the factors that affect a food’s nutritional value, appearance, flavor, and texture, heat is the absolute worst with the damage it can do.

I wanted to share with you the answer I give to this question and some of the tips we use in our own home, since we have only ever lived in very hot parts of the country — Phoenix and Texas.

What IS too hot for food storage?

Food retains its nutrients, flavor, color, and texture when it is stored at 75 degrees Fahrenheit or cooler. It’s amazing how quickly food breaks down in hot temperatures. It won’t poison you, but for sure, it won’t be pleasant to eat. I’ve suffered through mushy tuna, discolored ketchup, and very, very strange looking bottled salad dressings — and had to throw them all away, which is a sad waste of money.

Folks who are able to store food in basements in cool parts of the country have reported that even something like brown rice, which typically doesn’t have a super long shelf life when compared with white rice, have remained fresh tasting for ten years or more.

The problem is that even variances in temperature can and will eventually affect food. Few of us can store food in an area that is consistently and constantly at 75 degrees — and, the cooler, the better. I’m always envious of people in cold parts of the country who talk about having a basement that is always at food-storage-perfect temperatures. One item you probably don’t have in your food storage area is a thermometer, and I would suggest adding one right away. A good thermometer like this one can be very inexpensive, but if you hang it near the entry of the pantry, you’ll be able to quickly check the temperature. That particular thermometer also keeps track of humidity, in case that’s an issue.

I used to live in Phoenix, and I know all about summer heat! We have to be careful of indoor temps beginning around early to mid-May all the way through October! (Kids don’t exactly wear jackets over their Halloween costumes around here!)
It’s a smart thing to be worried about the effects of heat on the food you’re storing, but also guard against light, oxygen, pests, and humidity. In our Phoenix home we had a spare bedroom that became our food storage pantry. Since keeping just that one room quite cold at 75 wasn’t realistic, we found other ways to protect the food.
First, my husband covered the window with an opaque film to help keep out the heat. A big percentage of heat that enters your home is transmitted indoors via windows, plus light itself damages food over time, so this film helped protect the food in more ways than one. Also, the film helped conceal the contents from any casual passer-by.
Besides window film, always keep your windows covered with blinds and/or curtains, year-round, and if you can do something to insulate them, that would be even better. Home improvement stores sell large sheets of Styrofoam, which can be cut to measure any window, and then pressed against the glass and taped to the window frame. Styrofoam is used to insulate stucco homes, and while not attractive at all, it can be effective in keeping heat out of individual rooms.
During the Phoenix summers, I generally kept the air conditioning set to 80 degrees during the day. Our home was very well insulated, and this temp worked for us in the dry Phoenix heat. Your situation may be different and you might need to lower the A/C in order to maintain an ambient temperature of less than 80 degrees. Test the temperature of your main food storage area occasionally. Install a ceiling fan to circulate the cooler air entering the room or consider buying a small A/C unit to keep in the room and use only on the hottest days. If our home had been less insulated, that is something we would have added.
One important factor is to keep the temperature as consistent as possible. This might be difficult in some cases, but temperatures that frequently fluctuate from 80+ degrees and then down to 70 and then back up to 80 or more and then back down — your food will soon begin to be affected.
Under no circumstances should you store food outside in the heat. Not in attics, outbuildings or garages (unless they are insulated AND cooled to temperatures in the 70-75 degree range), or crawl spaces. In those instances, the quality of your food will deteriorate within just a few weeks, not months or years.
Consider storing food under beds and in storage spaces around the rest of the house. My #1 tip for prepping is to de-clutter, and this is one of the reasons why that is so important – empty your home of unneeded, unwanted items to make room for what you do want, such as stored food! We recently packed up about 1/3 of the stuff in our house and put it in a storage unit. So far, the only thing I’ve missed is having more than 1 wooden spoon in the kitchen! We really DON’T need all the crap we collect.
Thrive Life makes an under-the-bed unit that stores cans of food and is a great way to “find” new storage areas that didn’t exist before. These Cansolidators keep food organized and stored under beds or in other handy locations that aren’t quite big enough for shelves.
Finally, if you’re just not able to keep your house cool enough in the hot summer months, you may need to rotate through your food more quickly. Rotate food by using the oldest food first. This is a smart idea anyway, regardless of the season.

A word about humidity

After leaving Phoenix, we ended up in a part of Texas that is both hot (although not as hot as Phoenix) and humid. It was an interesting transition to say the least.
Here, we set up the same metal shelving units we used in Phoenix in a small storage room with an AC unit installed in the wall. The metal shelves worked out great but here, they’ve met their match, unfortunately. We have the AC set to also remove humidity, but it’s not quite up to the task on days when the humidity level is 80% and higher. In 2 cases, we ended up with rust on the shelves and rusty cans. About 2 dozen or so Thrive Life cans became too rusty to be viable and I had to repackage the food. I also noticed the other day that some of my canning jars had rusted. This in spite of the dehumidifier setting on the AC and the occasional use of Damp Rid.
I love the Damp Rid product and, in fact, when I was interviewed for BuzzFeed by one of their writers, she was fascinated by what she described as, “kooky and mystical” crystals! i don’t know about kooky and mystical, but I do know they do a great job of absorbing humidity anywhere I’ve put them.
So, to solve our humidity problem, we are moving to wooden shelves and a free-standing dehumidifier that will be up to an apparently Herculean task
One final word — this humid climate has also increased the amount of bugs we have to deal with, something that wasn’t an issue in Phoenix. I’ve used diatamaceous earth around the baseboards of the pantry room and refresh it every so often, since high humidity affects its usefulness as a pesticide.
Putting money into food storage only makes sense if you can actually use it when you need it the most. Protecting it from heat and humidity may cost a few dollars but in the long run, it will save even more.
What are YOU doing to protect your food storage from high temps? 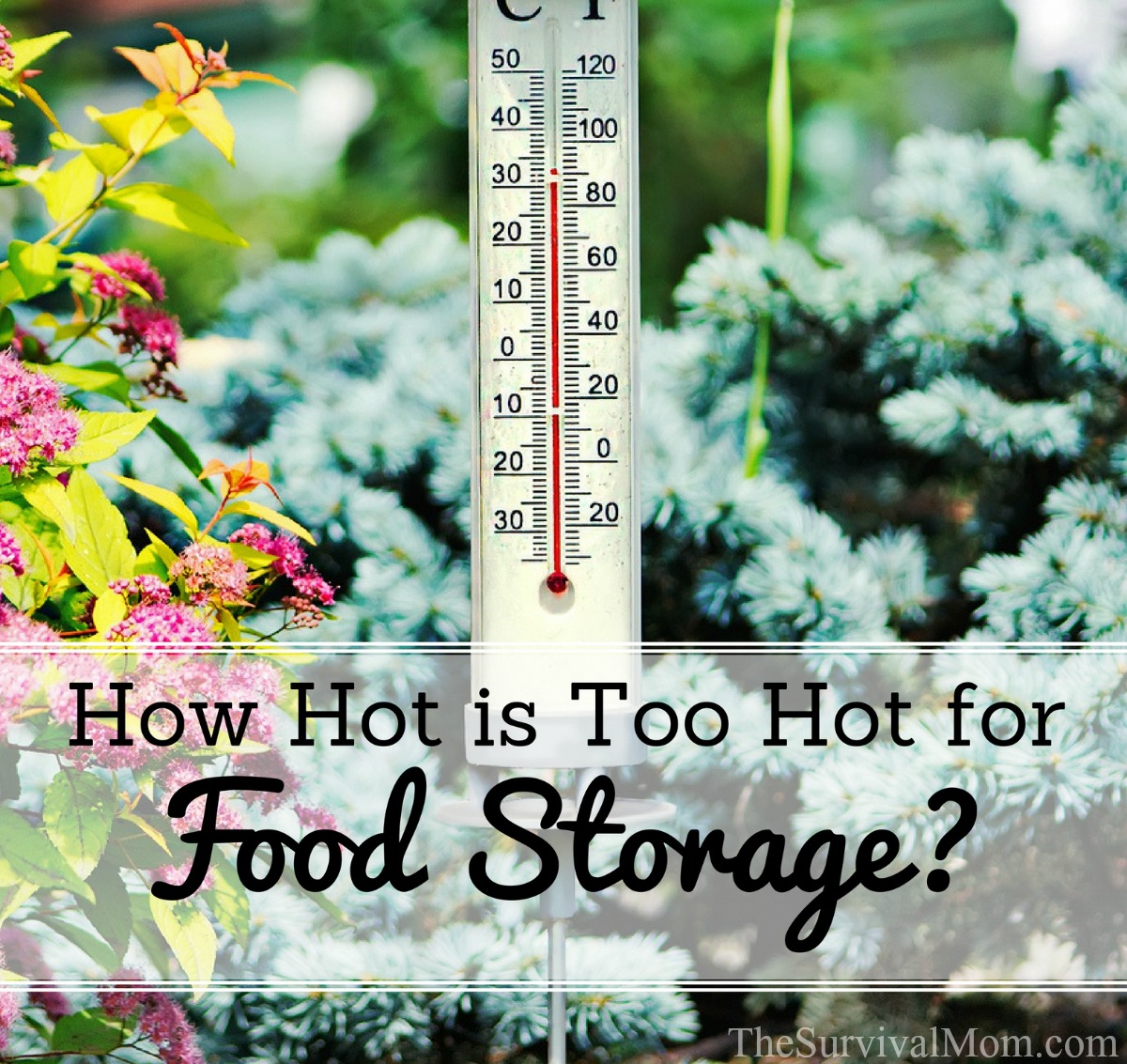 41 thoughts on “How Hot is Too Hot for Food Storage?”