Skip to content
55 shares
Some of the links in this post may contain affiliate links for your convenience. As an Amazon associate I earn from qualifying purchases.

This article originally appeared on the blog of my dear friend, Patrice Lewis, Rural Revolution . As the school  year winds down and amid a lot of controversy about the Common Core curriculum, many parents are wondering if homeschooling is for them. Here in all its glory is a list of the smart and stupid things we have done as a homeschooling family. Trust me. If we can homeschool, anyone can!

For the past ten years I have homeschooled our two kids.  My daughter is now finishing 9th grade, and my son is a 6th grader.  I’d like to say it’s been smooth sailing, but I have made some pretty stupid mistakes.  I’ve also made some smart decisions that have ultimately been responsible for ten wonderful years.  Here are a few of the smartest and stupidest things I’ve done as a homeschool mom.

SMART:  We decided to homeschool long before my kids were ready for school.  This gave me lots of time to research and time for our families to get used to the idea.  All the other grandkids were headed off to public schools.  Ours weren’t.  That took some getting used to.

STUPID:   It was futile to argue with family members about our decision.  With time, they saw that our kids were turning out just fine.  In fact, just two years into our homeschooling venture, I heard my mother-in-law comment about a particularly well-behaved kid, “I’ll bet he’s homeschooled!”  Bottom line: you make the decision to homeschool based on your own beliefs, research etc., and let family members think what they will.

SMART:   I introduced my kids to literature that I thought was too advanced for them.  We either read it aloud, listened to the unabridged recorded versions, or they read it on their own.  I was so proud of my daughter for reading Little Women, Robin Hood, Mary Poppins, and other unabridged classics that no longer appear on public school reading lists. As a former teacher, I’d been used to basal readers, aka dumbed down literature. It was refreshing to see my kids enjoying the real thing. Currently, my son and I are both engrossed in Treasure Island.

STUPID:  Initially, I thought we would always use the same curriculum.  We began with an activity-based curriculum, KONOS.  It was fun building our own model of a medieval castle and turning a chicken into a preserved mummy, but after a while, it became burdensome to constantly have major projects to prepare for.  When I saw that our next unit included making leather moccasins by hand, I started looking for something different.

SMART:  We formed friendships with other homeschooling families.  We’ve vacationed with one particular family at different times of the school year, gone on numerous field trips together, and it’s turned into a whole-family friendship. We now belong to a very large homeschool group that offers clubs, sports, field trips, and numerous other activities. It’s a matter of picking and choosing what we want to do. I highly recommend connecting with other homeschooling families, if for no other reason than you can schedule playdates in the middle of the day and aren’t tied to a public school schedule.

STUPID:  I was naïve in not realizing that politics and personalities can cause problems within homeschooling groups.  The first group we joined was wonderful, or so I thought until I learned that one of the moms had taken a singular dislike to my six-year-old daughter.  The woman was deranged, but we ended up leaving the group when we realized she had influenced other families and we no longer felt welcome.  Yes, it was bizarre and maybe not the norm, but I was probably too trusting.

SMART:  I’ve been willing to stop using a particular curriculum or method when I found it wasn’t working.  Saxon Math was a terrific choice when my daughter was in kindergarten, but halfway through first grade, she started freaking out when faced with a page of dozens of math problems.  After a few weeks, I switched to Singapore Math, and it was a much better fit. As a freshman, she’s back in Saxon! Flexibility is key, as is giving yourself permission to say, “This just isn’t working. Let’s find something else.”

STUPID:  At times we really overdid it with field trips and extracurricular activities.  In our city, there are dozens of possible field trips.  We belong to an email loop that informs me of every ballet, play, and other cultural events, all with unbeatable ticket prices.  After two years of one, and sometimes two, field trips a month, I realized it was too much.  The field trips were great but between traveling to and from and then a good dose of socializing at the event, we ended up losing entire school days.

SMART: Choosing the best over the good.  Field trips and extracurricular activities are all well and good, but ultimately, you have to remember that you’re supposed to be doing school!  One year, we dropped everything: a Tuesday morning Bible study, AWANAS, ballet, and sports.  It wasn’t that those things weren’t important.  We had just started spending less time with school, and I needed to refocus.  Bit by bit we’ve added some of those activities back into our schedule, but I constantly have to maintain a balance and drop the good when it starts overtaking the best.

STUPID:  At first, I didn’t think I needed guidance.  I was maybe a little too cocky my first year of homeschooling.  After all, I had been a classroom teacher for several years and had trained teachers, so homeschooling would be a piece of cake, right?  Well, not quite.  I had some real difficulties with coming up with a schedule that worked for us.  I also hadn’t counted on trying to do school with a three year-old climbing all over me, the table, and the math manipulatives.  It was our third year when my daughter was in second grade, that we started using curriculum that came with a weekly schedule.  It was such a good feeling to check off each activity and lesson and a little humbling for this know-it-all.

SMART:  Not trying to duplicate school at home.  We’ve only used one or two books I suppose could be called textbooks, and my kids have never sat at desks.  Years ago, before we began homeschooling, I saw a poor little eight-year-old boy sitting at his family’s kitchen table with a stack of textbooks and workbooks two feet high.  I felt sorry for him and knew instinctively that this wasn’t how I wanted to homeschool.  We’ve always been, what I call, casual homeschoolers.  Definitely not the textbook/desk type.

STUPID:  I tend to be pretty independent and I didn’t think I needed a boost of motivation every now and then.  I’ve missed several homechooling conventions, but when I go, I leave charged up and ready to take on a new year.

SMART:  Early on we realized that homeschooling is a lifestyle.  Learning becomes a whole-family activity.  Family vacations become long-distance field trips.  Questions from the kids become research assignments.  Yeah, it doesn’t always make us popular with the kids, but life is all about learning, and we try to reinforce that concept every day.

STUPID:  Doing something just because other families are doing it.  It was cute watching my little five-year-old doing ballet, but it took her taking me aside, as a nine-year-old, and saying, “Mom, I just don’t want to do ballet anymore.  It isn’t me,” for me to realize we’d overstayed our welcome with ballet.  I had fun visiting with all the other ballet moms, but while I was busy chatting and sharing recipes, my little sweetie was feeling like a clumsy misfit.  We immediately dropped ballet and never looked back.

SMART:  Taking comfort that tomorrow is another day.  When we have a day when we’ve been busy with errands, chores, and other stuff and no “school” happens, I know that tomorrow we get to try again.  Besides, the kids are always learning something, even if it’s the fact that the dry cleaners will donate a bedspread to Goodwill if it isn’t picked up on time!

My takeaway lesson is that homeschooling doesn’t demand perfection.  It’s more a matter of enjoying the journey, learning from mistakes, and focusing on what is most important, fostering a love of learning in our children. 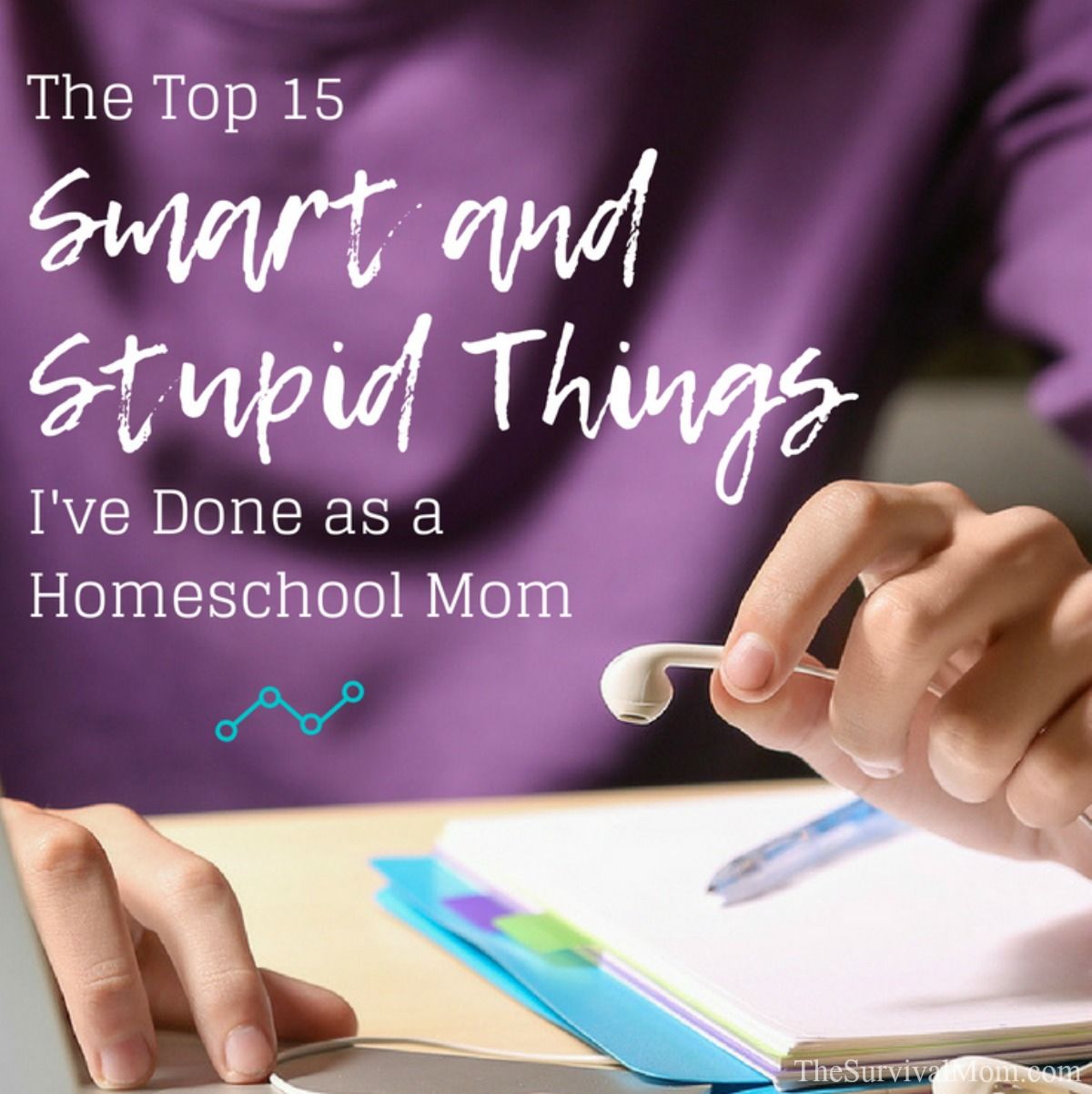