Skip to content
128 shares
Some of the links in this post may contain affiliate links for your convenience. As an Amazon associate I earn from qualifying purchases. 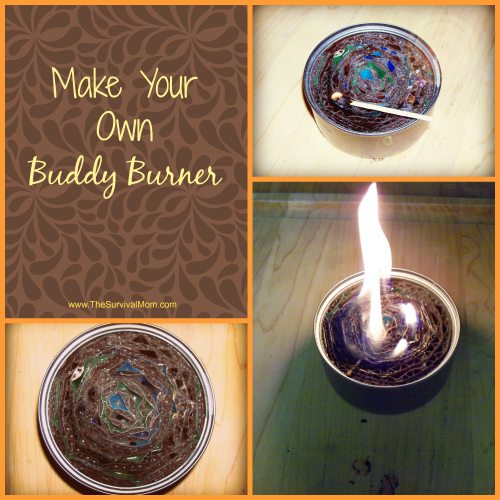 There are many ways to heat food during an grid-down emergency.  Most of them, though, such as gas grills, rocket stoves, and camp stoves, aren’t suitable for indoor use.  This can be a problem given that many emergencies that cause the grid to go down are weather related…the type of weather where you really don’t want to be standing outside and flipping burgers on the grill.

Buddy burners are a cool DIY project that give you an excellent tool for heating food indoors.  Granted, you won’t be preparing Thanksgiving dinner with one but they work quite well for warming a can of soup or stew, as well as heating water for coffee or tea.

To make a Buddy Burner, you’ll need the following:

Start by having your kids peel the paper off the old crayons or breaking the candles into small chunks.  While they’re doing that, take a small pot, fill it with a couple inches of water, and start it heating on the stove.

Put the wax from the crayons or candles into the soup can, filling it about halfway or so.  Place the can into the hot water, keeping the burner low.  You don’t really need the water to boil, just at a simmer.  What you’ve done here is create a primitive double boiler.  The water will heat and melt the wax, while the can prevents everything from getting messy.  Put one of your kids in charge of stirring the melting wax with a twig you picked up outside while you work on the other parts of this project.

Using the box cutter or knife, cut the corrugated cardboard into strips.  The width of the strips should be just slightly less than the depth of the tuna can.  Also, the cardboard should be cut across the corrugation, meaning along the long sides of each strip you should be able to see through the small “tubes” of paper to the other side.  I wish I could give you an exact measurement of how many inches of strips you’ll need but it varies.  Safe to say, though, you’ll need more than you probably think.

Begin placing the cardboard into the tuna can, wrapping the strips along the inner walls.  Be careful as the inside rim of the can may be sharp.  Keep adding strips, going around and around in ever smaller circles, until the entire can is filled with the cardboard.  When filled, looking down into the can you’ll see nothing but what appears to be a spiral of small holes.

By now, the wax should be completely melted.  Using an oven mitt because the can may be hot, pour the melted wax into the tuna can, filling all of those little holes in the cardboard.  If you run out of wax before the tuna can is full, just melt some more and add to it.

Let the buddy burner sit for a while to allow the wax to cool and harden.

To use, you simply light a match and use it to light the wax.  I’ve found if I hold a lit match just a bit above the wax, letting the wax melt a bit, then placing the match right onto that puddle works well.  It doesn’t take long before you’ll have a good flame rising up from the burner.

Now, you can’t just place your soup pot directly on the burner, of course, as that will smother the flame (not to mention get melted wax all over the bottom of the pot).  What I do is grab either a couple of small bricks or a few large rocks and bring them inside.  Placing the bricks on either side of the burner, or putting the rocks in a triangle around it, gives you a place to rest your pot, suspending it above the flame.  The buddy burner will burn for a long time, plenty long enough for a pot of soup or to boil water.

To extinguish the flame after you’re done cooking, take a square of aluminum foil and crimp it down over the top of the burner.  Alternatively, you could plate a pot lid over it.