Skip to content
114 shares
Some of the links in this post may contain affiliate links for your convenience. As an Amazon associate I earn from qualifying purchases.

Hurricane Harvey has turned into a life-changing monster here in Texas. We aren’t far from Houston and have been keeping tabs on the massive flooding and rescues. It’s doubtful my husband will have an office to report to on Monday morning.

Local and national news sources are reporting hundreds of rescues — people driving into areas that are clearly flooded, people remaining in their homes until they are waist deep in water and have no way out.

In a Facebook discussion (you can read it here), people are frustrated and confused with such stupidity.

Cristene asks, “Why didn’t you leave when you had the chance? For your kids sake?. Why?”

Aline, “They had several days of warning…they didn’t have to leave at one time.”

Lisa, “They may not have known exactly where it would make landfall, but they knew it was coming and that it was very slow moving…people need to use their brains and whether or not some “government official” said to evac or not, should know enough to get the hell out.”

Bill, “What did people think? A huge hurricane was coming but would cause no change to the area around them? Ignorance can kill.”

Every one of these people is exactly right. How often do we need to hear, “Turn around, don’t drown,” to convince us that driving into a flooded street, even if it appears to be safe, maybe deadly?

And the families stranded on rooftops. Do they not have the sense that God gave a duck (as one of my aunts used to say) to get out while they could?

Well, there are a few answers to these questions and the blame doesn’t lie entirely on the heads of these desperate people.

First, and this one is important, PEOPLE BELIEVE THEIR OWN DATA. Years ago I had a co-worker who would only ever believe the “experts” she consulted and her own personal experiences. If someone had a contrary opinion or relayed information from a different, authoritative source, her own personal evidence was the only information she believed.

For those who make apparently foolish decisions in the face of a crisis, the truth is that for many, it’s only until their car’s engine is flooded or their home begins filling up with water do they believe it could happen to them.

This leads to normalcy bias, which I’ve written about at length in this article. Our wonderful, incredible brains insist that everything is fine and life will continue as usual as its way of maintaining psychological and emotional equilibrium. And, as I’ve learned personally, once you’ve experienced one hurricane after another or a series of similar crises, you do tend to believe that everything will be fine. It’s a combination of the brain sending the message and then the receiver being too willing to believe.

Then, there are practical reasons for people not making smart decisions. In many cases, people have no resources for evacuations, no money for a hotel, no family or friends with whom they can stay, and, if they are overworked and over-stressed, they have probably not spent much time researching survival and preparedness. Several other reasons for not listening to advice, warnings, and even orders might be explained in this article.

It really isn’t all that hard to be ready

I began prepping, as it’s called, almost 9 years ago when the storm clouds of a major economic recession began to appear, and I’m so glad I did. I started with storing water, buying extra toilet paper, and stocking up on canned food. I was on my own and had to do all my own research and learn from my own mistakes.

For some, that works but for most people, they don’t have time for all the research or money for expensive mistakes in spite of knowing full well they need to prepare. As I’ve been saying, everyone will have their own “Harvey”. For me, it’s this massive hurricane and floods that will last for weeks, but for you, it might be a job loss, a power outage that lasts for several days, an earthquake or other natural disasters — trust me, there are plenty of “Harveys”!

Do you feel like maybe you might need extra help, advice, and support to get ready? Well, if you are a Survival Mom or a Survival-Mom-wannabe, you’re invited to join my exclusive, members-only group, Survival Mom Sisterhood.

I designed this membership club to support women in a small group setting with short monthly classes, live Q&A sessions with me, a blueprint to move forward each month to create a family and home that is resilient and prepared.

Are you tired of scrambling from crisis to crisis and always feeling unprepared for whatever life happens to throw at you?

Have you become confused by conflicting and sometimes pretty extreme survival advice?

Did you start prepping several years ago but then stopped because your life became too busy?

Do you want to meet other women with the same mindset and focus from all over the world?

If so, then you’ll love being a part of Survival Mom Sisterhood!

I open the doors to my group just a few times a year to allow me to get new members off to a great start with orientation, an onboarding Bingo game, and meeting the other members. Visit SurvivalMomSisterhood to learn more and sign up for the waitlist if registration isn’t currently open. 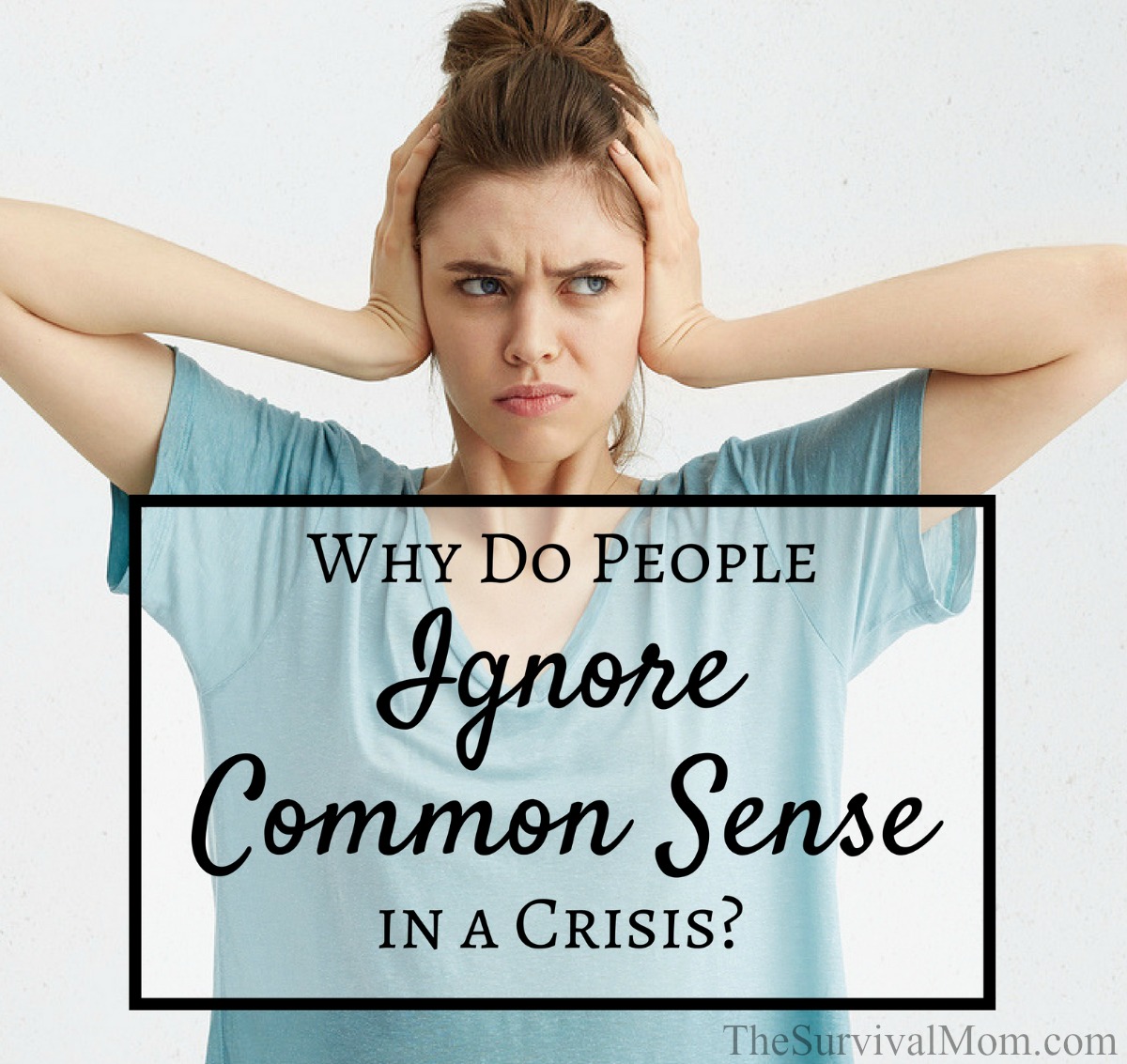 1 thought on “Why Do People Ignore Common Sense in a Crisis?”