Skip to content
28 shares
Some of the links in this post may contain affiliate links for your convenience. As an Amazon associate I earn from qualifying purchases. 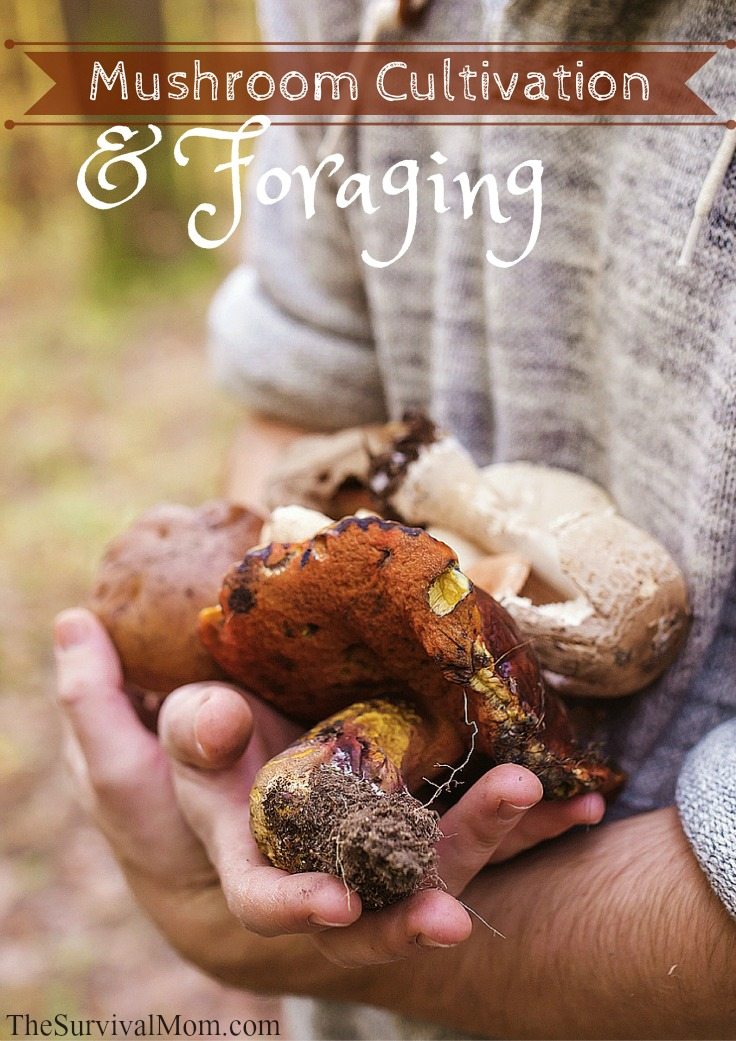 I love to hunt wild mushrooms in the summer and fall in Northwest Indiana. I usually go out in June through October for Pheasantback (Dryads Saddle), Oyster, Sheepshead (Maitake), Puffballs, Chicken of the Woods, and Boletes. I like having fresh ingredients to prepare to eat as soon as I get home. I can also sautee them and freeze them for later use.  It also gives me some exercise, sunlight, and a chance to inhale all the wonderful smells of fall leaves deep in the woods. I’ve also seen a great deal of wildlife while I’m out there. It just restores my soul.

NOTE: This article is about my own foraging and cultivating of mushrooms, but expert Dr. Mart “Merriweather” Vorderbruggen of Foraging Texas recommends being very careful foraging for mushrooms until you can take a class on identifying wild mushrooms and are an experienced forager. Even experienced foragers can sometimes mistake a poisonous mushroom for an edible one.

Mushrooms are considered a superfood, and as such, they have many benefits. They’re rich in antioxidants, amino acids, vitamins, and minerals. They’re also a good source of iron, readily absorbed by the body. This is great for anemic people or vegetarians to keep up their iron levels, which play an important role in forming red blood cells. Mushrooms containing Linoleic Acid can have an anticarcinogenic effect and have anti-tumor properties.

Mushrooms are gluten-free,  low calorie, low carbohydrate, high fiber, no cholesterol, and have compounds that may help regulate insulin production. Mushrooms are a source of calcium, which is wonderful if you are lactose intolerant, and vitamin D, an essential vitamin that helps the body absorb and metabolize calcium and phosphorous. (Another source of vitamin D is sunshine. Read more about mushrooms here.)

Potassium is also found in Shiitake and Maitake mushrooms. This can relax the blood vessels, leading to lower blood pressure, but beware, it can increase potassium in people with poor kidney function or on dialysis. Copper and selenium are found in mushrooms. They are trace elements that we need for essential body functions. Do read up on individual mushrooms for specific benefits because they vary between species.

Cultivating your own mushrooms

If you don’t have a wooded area near you, have a hard time walking, or don’t want to get burrs and bugs on you, consider cultivating your own mushrooms by making “mushroom logs”. I really love Shiitake mushrooms, but they don’t grow wild here, so I decided to create a hospitable environment for them and grow my own.

I needed to find some fresh-cut oak logs, about 4-6 inches in diameter.  My husband and I found somebody cutting down a tree after a storm, and we asked for 4 of the medium-sized logs which had been cut from it. They were happy to give them to us because they were going to pay somebody to remove them anyway.

These logs had to sit for about a month to cure them before I could use them.  One site I researched said that freshly cut logs give off some type of protective enzyme after being cut to prevent other fungi or spores from attacking them. Another site stated the moisture content needed to be reduced by 50% internally but still moist enough to help the mycelium from the mushroom spore grow into the wood.

In the meantime, I ordered my mushroom “plugs” with the spore on them. I ordered a bag with 100 plugs and placed them in my refrigerator until I was ready to use them. I invited a few friends over, and we did this project together. The supplies we used were:

Hot plate and an old pot or a tiny crockpot

Pallet, 2’x4′, or cement block to place logs on

I warmed up my beeswax in a small crockpot. I kept it plugged in until I was ready to use it. In each log, I drilled a hole that was just slightly deeper than the plug. Next, I gently tapped it in with a wooden mallet, then each hole was sealed with melted beeswax that was applied with a small paintbrush. This would protect my spores until they became “established”. (The weblike structure or mycelium would now grow into the wood). Eventually, the beeswax will break down & the mushroom would emerge from this hole.

I drilled another hole every 6 inches until I got to the end of the log. Then, I rotated it and started drilling holes again. I had three rows when I was finished and repeated this with the other 3 logs. I actually ended up with m 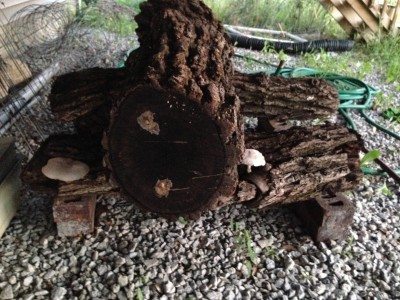 ore holes than I needed, but not a big deal. Since I did this in February in my garage, I didn’t put them outside yet, due to the danger of frost.

Around late April, I selected a shady spot under my deck and placed four cement blocks down as a base for my logs. I placed them parallel to each other, then stacked the other two across them, kind of “Lincoln Log” style, then checked to make sure none of the holes were covered during the stacking. It’s important to keep them moist, so I watered them a few times per week and placed a tarp over them in the hotter weather.

Then, in September, voila! They began sprouting all over the wood. I was very happy to begin my mushroom harvest. Now, I can’t wait until next year! I’m sure I’ll have a few new additions to my mushroom family.

Want to learn more about foraging? 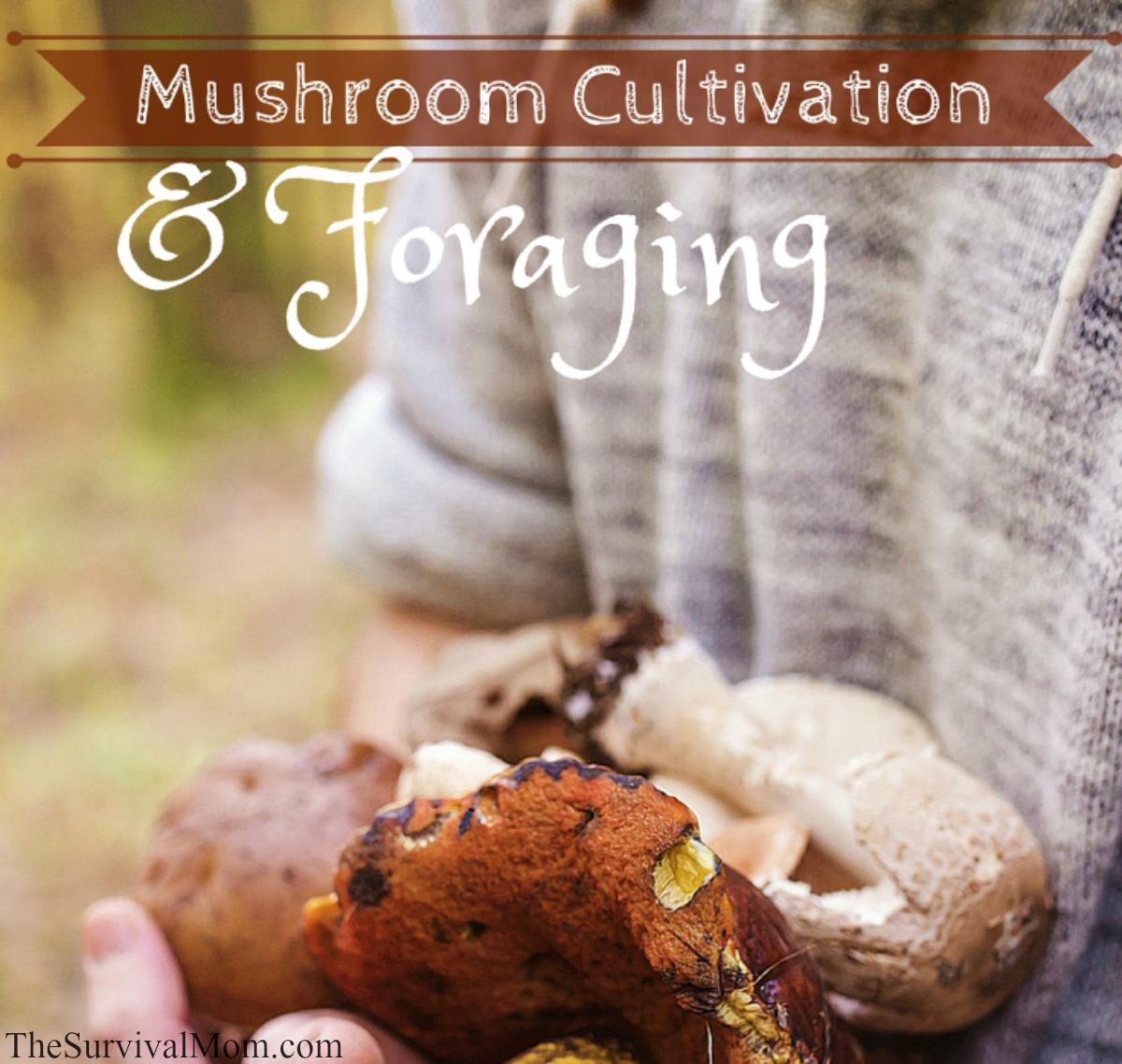