Skip to content
172shares
Some of the links in this post may contain affiliate links for your convenience. As an Amazon associate I earn from qualifying purchases.

Being prepared isn’t just about EMP’s or super volcanoes. It’s also about being ready for common bad things that happen every day, such as home break-ins. And as you expand your prepping supplies and food storage, you’ll want to improve your security situation
to protect those things. 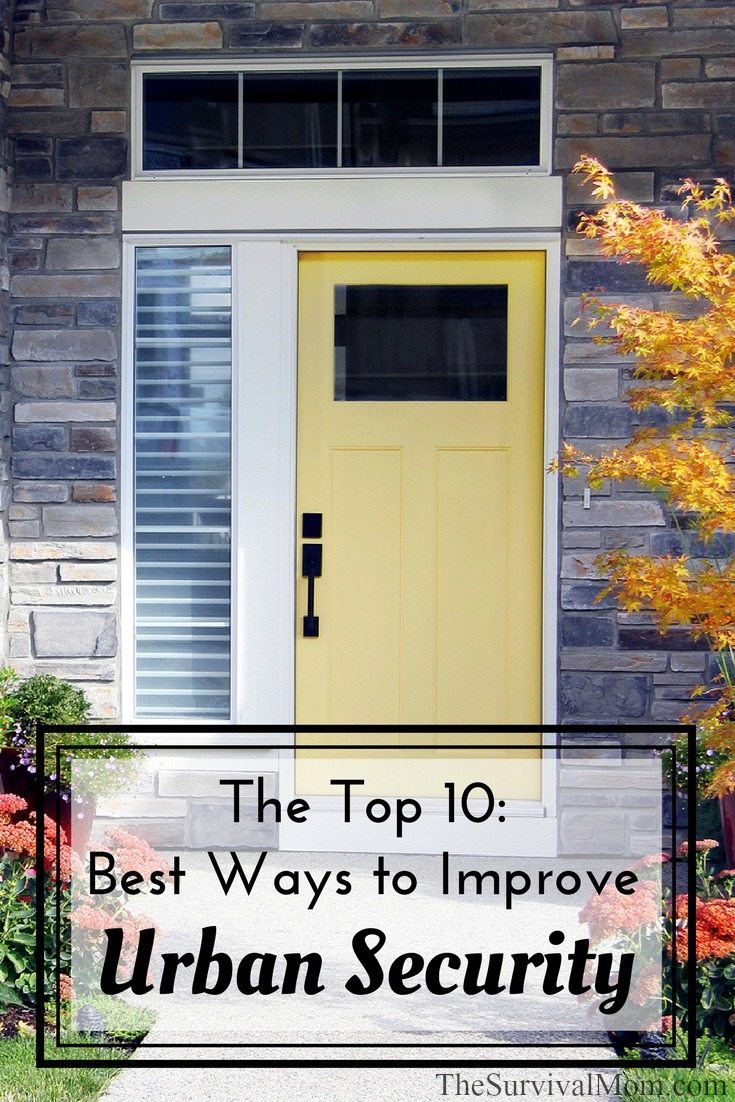 When we took a few minutes to evaluate our current home and property, we noticed a few areas that could be improved:
• Curtains on basement windows
. Like many people in our area, we have an unfinished basement that is mostly used for laundry and storage. But the tiny basement windows still allowed for someone to see in, especially if the lights were on. Because it’s an unfinished basement, it didn’t require anything fancy. I took a single curtain panel I found on clearance, c
ut it into 4 pieces, hemmed a rough border for a tension rod, and
instantly our storage downstairs became less tempting and more secure. As a side note, I’m not very good at sewing, and usually, delegate this sort of thing to my mother in law. But general s
sewing skills are a good idea to have in your prepper toolbox, and it’s great when you can practice on something like this that doesn’t have
to look good. Cost: Less than $20.
• Add padlocks and fix broken locks
. We added a padlock to our perimeter gate, so at night, it can be locked from the inside. It doesn’t mean that no one can ever get in our fence, but it does mean it would take longer and make more noise to do so, increasing our chances a would-be thief would give up, or of us interrupting an intruder. We also fixed a broken lock on an interior storage cabinet, for similar reasons. Cost: $15 for bolt
– cutter resistant keyed lock.
•Put solar garden lights on the perimeter. This was my favorite because it made my flower bed look so pretty!
But having solar lights on our fence posts and down in the gardens means that when we hear strange noises, we might be able to see what’s going on without leaving the house. The first week they were
up, we stopped 4 raccoons heading to the chicken coop! True, they weren’t human intruders, but it was a good test that the solar garden lights would work the way we intended. Cost: About $4/light.
• Trimmed bushes
. We have beautiful lilac bushes in the front of our house. But they had grown so much in the last few years that it was difficult for me to see outside the front windows. That meant it was hard for me
to see who was coming to my front door, or cars out on our street. By thinning these bushes, it left us some privacy but made it much easier for me to see out. Cost: $0, since we already have the pruning shears, and my kids did the work.
•Fix or install bright white lights and motion sensors at the entrances. We had a motion sensor light above our garage, but the sensor needed some attention and wasn’t coming on reliably. We’ve also noticed a trend in our area where people change their outdoor lights to colored bulbs to show support for some cause, for example, green to support military vets. In my opinion, colored lights greatly reduce your home security
. The idea, after all, is to illuminate entrances for your safety when you arrive home after dark and to make bad guys feel less secure. Consider putting up a yard sign or bumper sticker for the cause
instead, and stick with bright white lights for your entrances. Cost: Replacement bulbs will vary, a motion sensor kit is less than $50
on Amazon
.
• Install closed circuit cameras
.Rather than paying home security company, we ordered a set of closed circuit cameras and installed them ourselves. The sight of cameras may deter thieves, and if not, it may help catch them more quickly using video evidence. Cost: about $100 for a few cameras and a storage hard drive. If you don’t want to DIY, there are inexpe
nsive options out there, such as http://retinasoftsecurity.com/
that starts at $10/month.
•Re-think access to your personal defense items
. For example, if someone forced their way into your front
door while you were home, perhaps you could easily reach your personal defense items in time. But what if it was the back door? Or that basement window? People with larger properties often keep personal defense items with them at all times. You might re-think
access even in a small urban home or apartment because if
that situation occurs, seconds count. Cost: $0 to rearrange what you already own so it’s easier to reach no matter where you are in the home.
•Split up supplies
. This one is specific to your preps. But consider dividing up your food storage, cash, personal defense inventory, or anything else to at least 2 places in your home. You’ll increase your chances of having something left in the event your home is damaged or robbed. Cost: $0
.
•Repair or Replace fencing
. We had a 15-year-old section of privacy fencing that was literally falling apart. If the chickens could push through it, surely a bad guy wouldn’t be slowed! We also chose to replace our bent-up chain link with 6 food wood panel fencing. Our backyard privacy and security improved drastically over just a few weekends! Cost: varies, depending on repair or replacement, and length and type of fencing
.
•Make sure items are stored out of sight
.Again, this is just rethinking what you already have and where
it lives. More expensive items should be locked up, or perhaps even stored indoors. For us, this will be an on-going effort. Cost: $0
.Most of these weren’t super expensive and didn’t take much time. All of them we could do ourselves. Your list may be quite different than mine. But take a quick walk around your apartment, home, or property and see what you could do to improve your own security.
As a bonus, improving your home security might also reduce your home insurance payment. You could even start your list by checking with your home insurance agent to see what would count toward your policy. 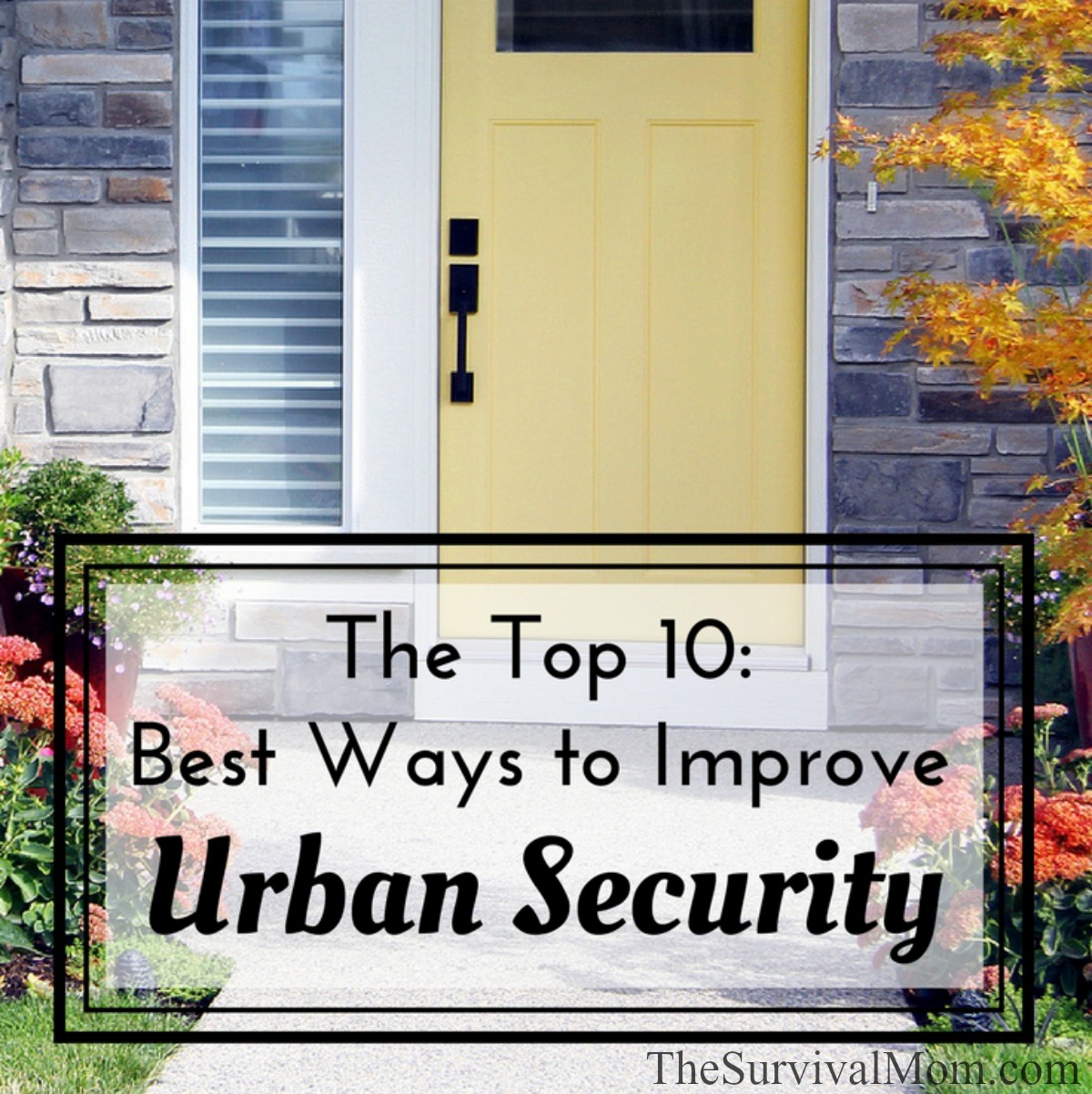 4 thoughts on “The Top 10: Best Ways to Improve Urban Security”