Skip to content
2559 shares
Some of the links in this post may contain affiliate links for your convenience. As an Amazon associate I earn from qualifying purchases. 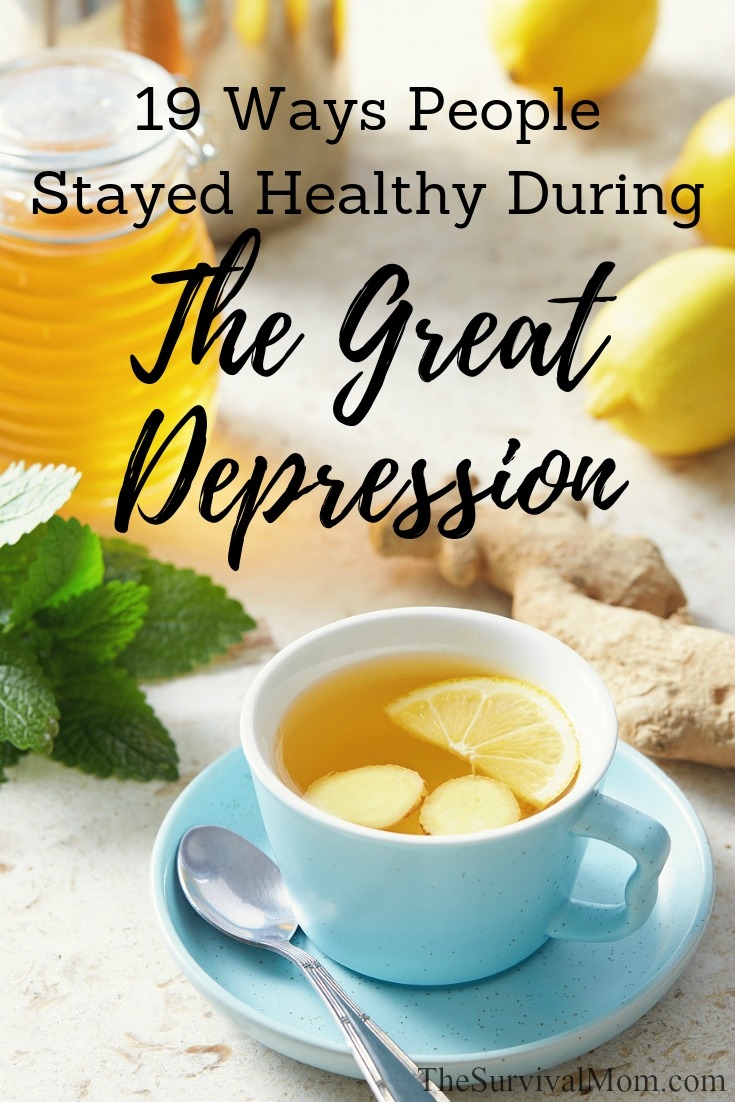 The Great Depression years were no picnic. My grandmother lived through that era as a child and much of her mindset in later years was due to a childhood spent in near poverty. However, she always had a great attitude toward life and knew a thing or two about Great Depression home remedies.

During the Great Depression, most families had to make do, not just with their clothing and belongings, but also with healthcare. Many grew up on farms and small towns and didn’t have the modern-day easy access to doctors, clinics, and hospitals and as incomes plummeted, so did the availability of medical care.

What’s interesting is that in spite of some very tough times, less access to doctors, and poverty, U.S. life expectancy increased by 6.2 years. It rose from 57.1 in 1929 to 63.3 years in 1932, for both men and women and whites and non-whites. The researchers concluded that when people have less money to spend, they sleep more and there is less money for things like alcohol and tobacco. Employers typically don’t have as much work for their employees, so they work at a slower pace.

In spite of massive unemployment and widespread poverty, how did they stay healthy? In general, they relied on home remedies, some still used today.

Here’s what I learned about how people stayed healthy during the Great Depression years. See if any of these sound familiar to you.

First, think about the standard diet of today compared to that of the 1930’s and 40’s. Today, our grocery stores are filled with processed foods containing many ingredients unknown to people back then! With the exception of Velveeta, which became popular in the 30’s, meals back then are now the trendy “whole foods diet” many of us eat today — vegetables, meat, poultry, fruit, whole grains, healthy fats.

You can read my list of dozens of Great Depression meals here and you’ll see what I mean. You won’t find Twinkies, sugary fruit juice, or frozen dinners anywhere on the list.

Since most households grew at least some of their own food, canning was popular. Today we can food because we want to avoid the additives found in commercially processed foods. Well, back then, that was just how they ate and women, in particular, took great pride in their pantries stocked with home-canned foods.

Something else you won’t find in the homes of the Great Depression was any type of labor-saving appliance or device. Housewives got a real workout simply by keeping house and cooking everything from scratch. It’s interesting that memberships to gyms and fitness centers weren’t a thing and yet people back then managed to stay trim.

Skills that have become trendy in recent years, such as soap making and sewing, were far more common back then with one generation teaching the next, and each of those skills requires active participation and energy. You can’t make soap sitting on the couch!

If you think your grandma’s homemade chicken noodle soup was a cure-all, well, you could be right. Chicken noodle soup is a well-known remedy for colds and it’s been proven scientifically to be effective. This was just one of the healthy home remedies used in Great Depression households.

One remedy I happen to have personal experience with is the mustard plaster, something popular back then for chest congestion and sore muscles. Years ago my husband decided that a mustard plaster might cure his sinus problems and congestion. Turns out, he is horribly allergic to mustard powder and he spent almost a week in misery due to the after-effects.

However, if you aren’t allergic, this remedy can be helpful for sore muscles and pain because it warms the skin much like capsaicin. At one time in the United States, mustard plasters were popular for also treating colds, runny noses, rheumatism, and various respiratory ailments. During the Great Depression, a plaster would be made from combining dry mustard powder, a little flour, water, and either mineral oil, olive oil, or egg white to form a paste. Spread this over a thin piece of cloth and then place the cloth on the skin. If you’re curious about how to do this, read these instructions.

Do you remember your grandma or mom telling you to put your head over a simmering pot of water in order to breathe in the steam? That was another remedy Great Depression parents knew about. In many parts of the country, doctors were hard to come by, so families had to make due with remedies like this one, and it actually is very effective. In many Great Depression homes they would not have had modern-day showers to create a steam bath, but instead would have leaned over a pot of steaming water and then created their own steam bath by draping a towel over their heads. It works!

Medicinal herbs weren’t a mystery to thousands of Great Depression households and, in fact, children were taught from a young age to forage for both medicinal and edible plants. Licorice root is a good example. Since ancient times people have known licorice to have healing properties and now we know that it may be effective against tooth decay and periodontal diseases. Some old folks made their own licorice root tea for indigestion and as a laxative. The important thing was to first know about the edible plant and then be able to identify, harvest, and use it.

Various mint plants and eucalyptus were sometimes added to those steaming pots of water and not just for an individual to breathe. Great Depression moms knew the whole family could benefit by breathing in that vapor and the easiest way to spread it around was by placing a big pot of water either on the stovetop or on top of the cast iron stove.

In my research, I found many more simple home remedies from the Great Depression years.

The life and times of the Great Depression years are a world away from our modern lifestyle. It wasn’t unusual for neighbors to band together to fix meals for a family whose husband and father had just lost a job. Along with sharing meals, they also shared knowledge, including home remedies, and this helped the entire community stay healthy. A lot of wisdom was shared during those years.

As well, when a neighbor was sick, word spread like wildfire and everyone knew to stay clear of anything that might be contagious. So maybe it was more than just knowing remedies and being able to identify herbs and other medicinal plants. Maybe a big part of staying healthy during the Great Depression was all about neighbors taking care of neighbors — something that should play a bigger role in our communities today. 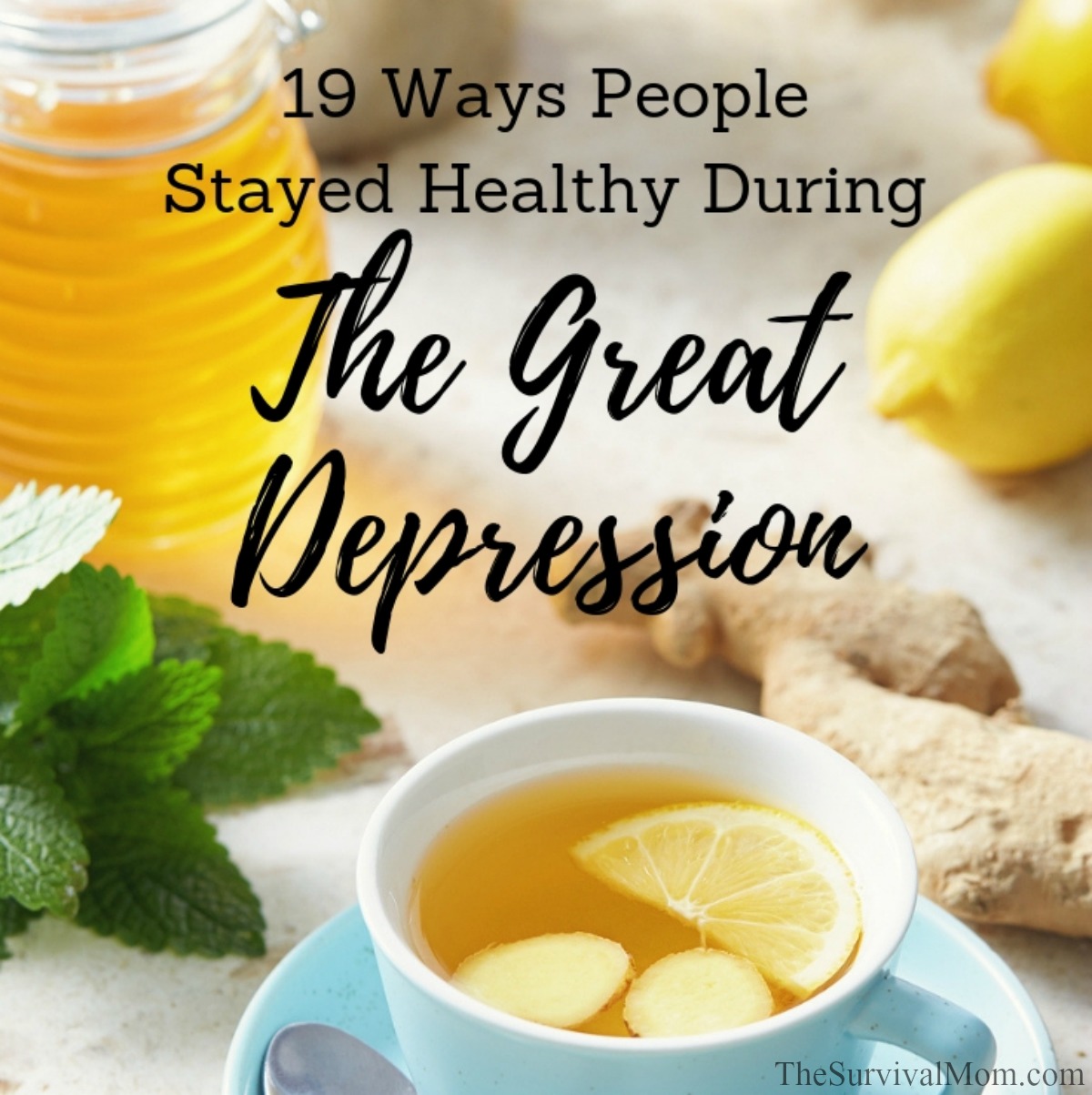