Skip to content
103shares
Some of the links in this post may contain affiliate links for your convenience. As an Amazon associate I earn from qualifying purchases.

Everyone has bad habits. I don’t believe there is a human being alive who doesn’t. In everyday life, most of these aren’t a big deal. You’re not a bad person if you have a weakness for chocolate. So you forget to put your shoes away, no one is going to die from that. Maybe you just need a closet organizer, like this one.

Survival situations, however, are different from real life. A bad habit that may simply be an annoyance to your spouse on a regular day could have severe consequences in an emergency. Here are 5 examples of bad habits that will kill you when your survival is on the line.

It’s no secret that eating out too often is detrimental to your health and your wallet. It’s much more expensive to eat at a restaurant than it is to cook your own food at home. New York Times columnist Mark Bittman breaks it down in this article.

He calculates that a trip to McDonald’s will set you back $28 for a family of four, whereas a home-cooked chicken dinner with vegetables is only $14. And, it’s not only the expense. It’s also much easier to overeat at restaurants because portions tend to be larger. Then there is the issue of making healthy food choices, something that may be difficult in a restaurant setting. Even when you ask for nutritional information, you still have no idea about the additives in the food.

TIP: Has eating out put a dent in your budget? Remember that financial preparedness is one area in which most survival experts have little to say. I recommend Dave Ramsey’s advice for budgeting and saving.

But here is the biggest reason why the habit of eating out too much can be a bad thing. Even if you choose an establishment that primarily serves healthy food, an over-reliance on outside sources for the preparation of your meals can make you less likely to develop cooking skills and habits of your own. Even if all you have in your food storage is freeze-dried, ready-to-eat, just-add-water meals, what will you do when they run out? Do you know how to cook from scratch, and are you comfortable enough with the process that you could do it every day?

2. Being out of shape

An emergency situation, whether in the short term or in a long-term SHTF scenario, will put a significant strain on your body. It is impossible to foresee the specifics of what that strain will entail.

A fit person who exercises with some regularity will be much better placed to meet these challenges. That doesn’t mean that you should sign up for the Marines’ wilderness survival training, even though I am sure it wouldn’t hurt. If you live a mostly sedentary lifestyle, it is never too late to become more active. Even the smallest amounts of exercise are better than nothing. I’ve used these versatile resistance bands to build muscle and burn calories.

(Ever thought of taking Karate? Here is how to choose a Dojo!)

In our modern life, our fight-or-flight response may kick in when we’re doing mundane things, like sitting in a meeting. You might feel like an idiot at the time, but no one (to my knowledge) ever died by being unprepared at a board meeting, but the stakes will be much higher in a survival situation.

My favorite example of why you should not panic comes from the movie, Jurrassic Park: The Lost World.  There is a scene where all the main characters are hiding from the T-Rex on the other side of a waterfall. Suddenly, a snake slithers down the shirt of the sympathetic, unshaven scientist. Close inspection reveals that the reptile in question has stripes of red touching black, which, as the old Cub Scout rhyme tells us, means this snake was not venomous. Still, the guy freaks out, and gets eaten by the dinosaur. (I found a YouTube clip of it if you want to see. It’s at 2:50.) Moral of the story: Don’t be that guy.

This is probably the most difficult part of emergency preparation. How do you train yourself not to panic when your emotions can be overpowering?  It’s not a quick fix like ordering a few cases of  food storage from the internet. It requires a change of mindset, which is tough.

Decide well before you are faced with a severe emergency that you will take a deep breath and assess the situation before you panic. Identify the real dangers (the carnivorous dinosaur),  the aspects that pose no real threat (the non-venomous snake), and the best course of action.

We all have our little addictions.  Most of our vices are relatively harmless: chocolate, Facebook, video games, french fries. But what would happen if suddenly they were taken away? As an example, some analysts are predicting difficulties in sustaining the global coffee supply.

If you have a serious thing for coffee, you could make green coffee beans part of your food storage like buckets full of wheat and rice. That would soften the blow in the event of a shortage, but if coffee became impossible to buy ever after, you would eventually run out of the coffee in your storage and would have no choice but to find a way to cope with a coffee-free life.

Keep in mind that this would be in a SHTF scenario, wherein you would already be coping with who knows what. You would be under enormous strain already; if you are one of those people who can’t function without your morning coffee, you can forget about everything else.

Of course this applies to other vices, large and small. If you can wean yourself away from them, you’ll be better able to cope in truly dire times.

My husband is going to laugh when he sees that I wrote this part. My failure to put away my shoes with any regularity is a constant thorn in his side. I have to admit, it does get annoying when I can’t remember where they are in the house and we have to leave the house in five minutes. I am under no illusions that it will be much more serious when we have fifteen minutes to evacuate the house and I still can’t find my shoes, or the kids’ socks, or, heaven forbid, other important and life-saving equipment.

If you have a bad habit, the important thing is to resist the urge to throw in the towel and proclaim, “I just have bad habits and there’s nothing I can do about it.” There is always something you can do. Part of being a prepper means you don’t just lie down and let bad things roll over you. No! You stand up and do something about it!

I’ve been trying to kick my nail-biting habit for decades, but I’ve finally made some progress: I haven’t bitten them in nearly four months! If I can quit biting my nails, I can probably find it within myself to put my shoes away, too.

The thing with emergency preparedness is that you can’t predict when emergencies will happen. Waiting until tomorrow to abandon bad habits may be too late. But that doesn’t mean you have to change completely today. Start small at first, then work your way towards the bigger things. You’ll be glad you did. 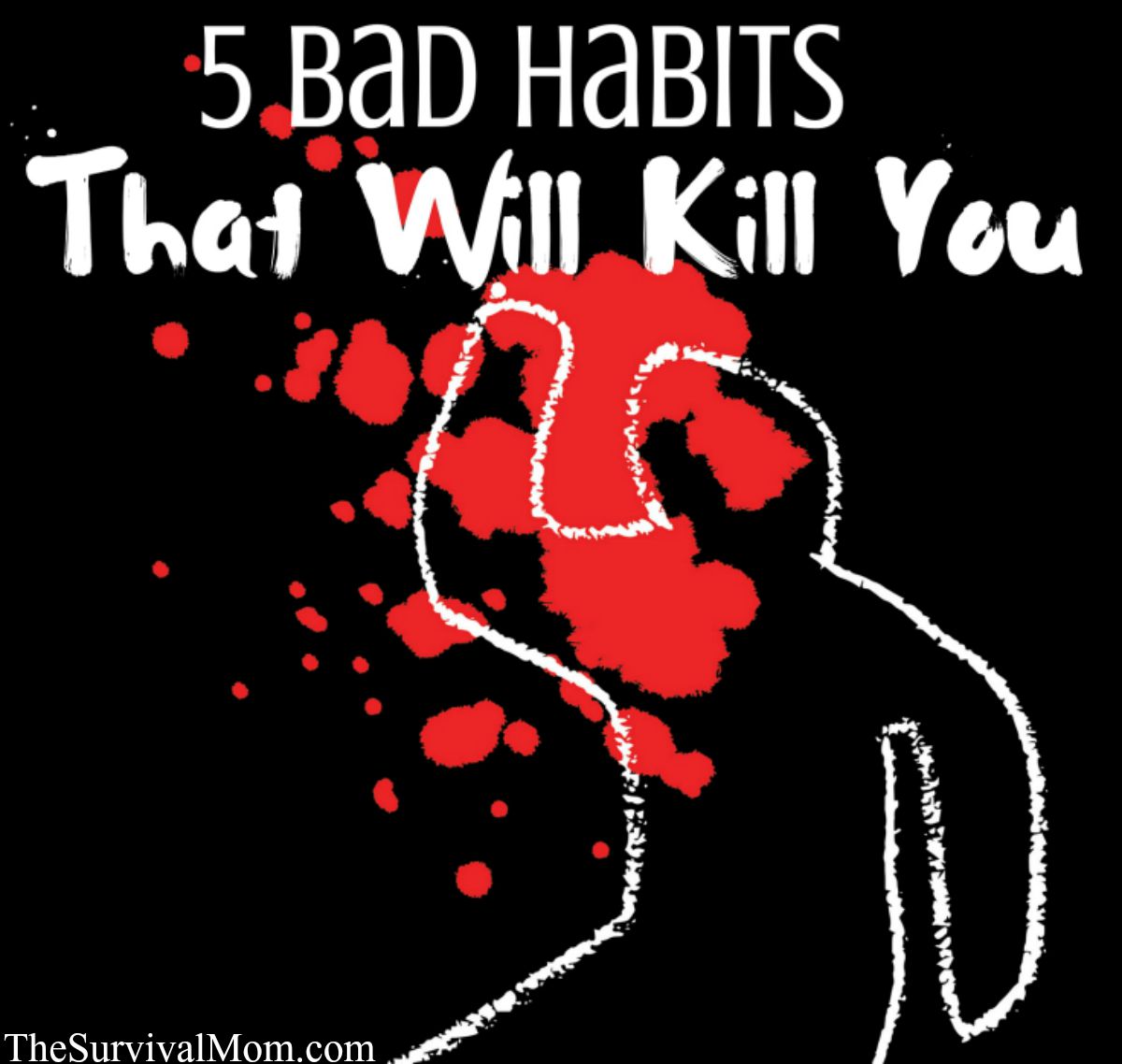 24 thoughts on “5 Bad Habits That Will Kill You”