Skip to content
39 shares
Some of the links in this post may contain affiliate links for your convenience. As an Amazon associate I earn from qualifying purchases. 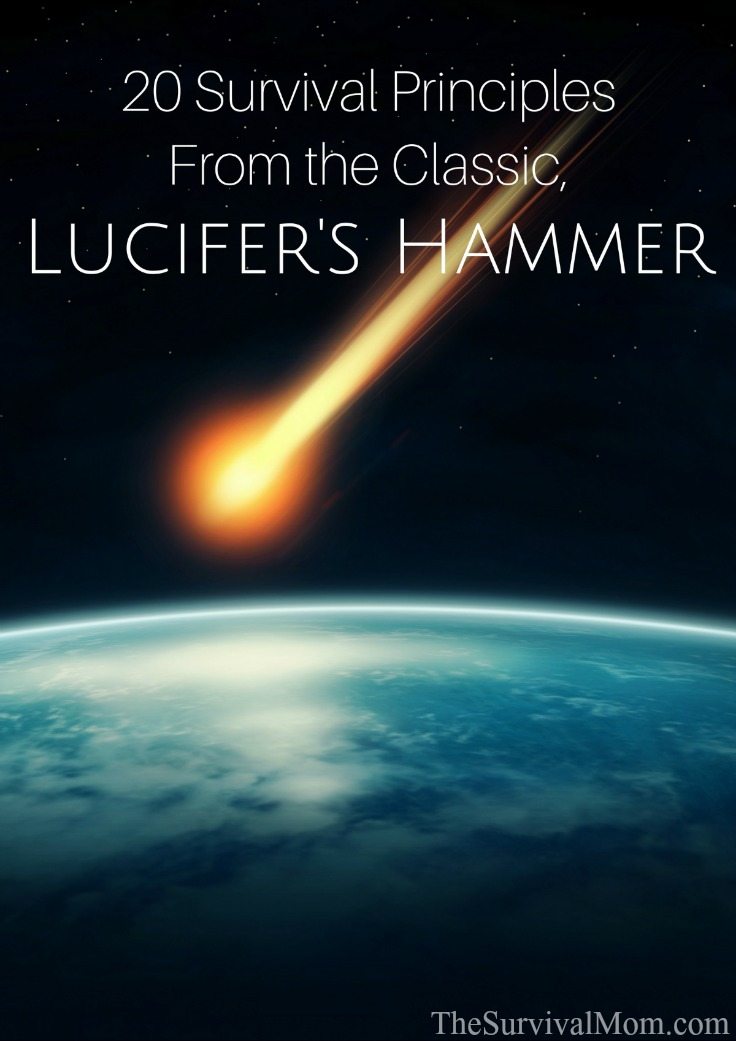 A classic novel in the TEOTWAWKI* niche is Lucifer’s Hammer, published in 1977, by veteran science fiction writers Larry Niven and Jerry Pournelle. The story line is a classic end of the world scenario. A previously-unknown comet is discovered only months before scientists realize it is on a near-collision course with Earth. Naturally, virtually no one in the world is prepared when the comet breaks apart and strikes the Earth in several places. As the story continues, it focuses on the struggles of survivors, building into an exciting, good vs. evil finish.

Within this 600+ page story are 20 valuable, often universal lessons and principles worth examining

Things in the sky can be unpredictable

This story is based on a comet that crashes into earth; but there are other, more plausible hazards from space, foremost being electrical storms generated by the sun that can wreak havoc with our electrical grid as described in this article.

A U.S. Senator from California is one of the heroes of the story when he takes on the executive role, comparable to that of a Governor, when all other government structure fails. Even though he is hampered by a heart defect, he maintains the respect and loyalty of the group of people that gravitated to him. As a natural leader, he steps up in a crisis to do what he does best.

Be careful who you trust

The millionaire amateur astronomer who first discovers the comet, has a caretaker maintaining his mountain observatory. It’s stocked and ready to go as his personal bug out location. When disaster strikes, the caretaker and some friends decide they need the property more, and turn the owner away at gunpoint. The astronomer had placed all of his preparedness eggs in that basket, and was turned away with nothing but the vehicle he was driving.

Love may have to wait

Romance becomes much more complicated when your social circle shrinks. Within the Senator’s tight-knit survivor’s group, two alpha-males seek the attention of the Senator’s beautiful daughter. For political reasons, one of the men is strongly advised not to pursue her in the interest of keeping the group together. Personal relationships are difficult to cultivate and maintain in a big enough crisis.

Denying what’s in front of you can get you killed

One of the more memorable characters is a rural mail carrier who gets caught mid-route by the comet strike. Even in the face of extreme rainstorms caused by the comet, he presses to finish his mail route and is almost washed away. Salvaging as much of the mail as he can, he presses on and is shot at by predatory teens. He eventually accepts the dangers of the new world and obtains a pistol for self-protection. Realities may change and they may change drastically. Survivors will be those who can accept and adapt quickly.

A paroled rapist realizes that even if he indulges his homicidal sexual fantasies, he won’t be held to trial. He unleashes his urges on a young woman and is arrested for her murder. Later after the comet strike, he is the recipient of “frontier justice” from a jailer who releases lesser criminals but can’t bring himself to let the rapist go. This is a lesson to add self defense and home defense to your list of prepping priorities. Learn self-defense through martial arts (learn how to choose the best dojo), as well as teaching everyone in the household to use a firearm safely and accurately.

The right vehicle can save your butt

In 1977, the do-all, off-road truck was the International TravelAll, equivalent to today’s Chevy Suburban. In Lucifer’s Hammer, the TravelAll lived up to its reputation by getting characters through floods and mud, pulling down trees, and being reliable all the time, every time. In the real world, having a tough, reliable vehicle is just as important. This article shares tips for getting your vehicle ready for the end of the world, and it’s not as expensive as you might think.

You don’t have to know everything, you just need to know where to find it

Dan Forrester, Ph.D., is an Astrophysicist at the Jet Propulsion Laboratory in Pasadena, California when the comet strikes. He has the foresight to conceal reference books that turn out to be important in getting accepted into the Senator’s survival group. Later, these books become key in defending the good guys and restoring civilization. It also inspired me to get the books, How Things Work, Volumes 1-4, which are difficult to find, but a very good substitute is The Way Things Work Now and, for homesteading and rural basic skills, the Foxfire books.

Politics are a big part of disasters

As Lucifer’s Hammer progresses, comet survivors look to existing remnants of government to guide them. The lesson? Strong politicians and their supporters will have more influence over what happens following a disaster than they did before the disaster. Face time with politicians at all levels or campaign contributions before the disaster go a long way.

Adversity Forces You to Grow Up Fast

Several of the characters in the book have sons in Boy Scouts. The parents’ plan to send the Scouts up into the mountains for their safety backfires when the kids have to take on adult roles. While somewhat immature, the boys had the skills they needed to survive and survive, they did. Survival skills should be taught at all levels, and this list provides a good place to start.

The Keepers of Secret Knowledge are worth their weight in gold

Engineers, physicians, mechanics, machinists…these will be the modern-day alchemists who will salvage the remnants of the disaster and start to rebuild. Guards at roadblocks had lists of desired skills that could pass through to safety. Others were out of luck. The Knowledge: How to Rebuild Civilization in the Aftermath of a Cataclysm is a must-read for more information in this area.

Medical problems before become severe after

Dr. Dan Forrester, savior of the good guys has Type 1 Diabetes, a dangerous affliction to have in a post-disaster situation. He eventually loses his source of insulin and dies. However, all may not be lost in our more modern era. Read this article written by a prepper mom with a Type 1 child for practical tips to prepare for such an event. For the rest of us, it’s vital to become as healthy and physically fit as possible now, both as a prep for future hard times as well as a way to improve quality of life.

Hard decisions will have to be made

As it often happens in a sudden disaster, needs outstrip resources very quickly. Both the good guys and bad guys have in-depth discussions about available food, restrict adding new outsiders, and predict the severity of the winter soon to come. Do they feed strangers now, just to watch their own children starve later? Moral dilemmas will become one of the most difficult aspects of surviving, as Survival Mom explains in this BuzzFeed article.

Those with skills will fare better

This one is distinct from the “Keepers of Secret Knowledge” because it relates to everyone. Can you ride a horse? Drive a car with manual transmission? Use a two-way radio? Defend yourself with a handgun/rifle/shotgun? Have prior military or law enforcement experience? You will fare better than others if you said yes to one or all. Check out the section, Skill of the Month, for some ideas to build your skill/knowledge repertoire.

Few businesses are able to maintain large inventories of items, including food. Our modern computer-managed inventories and just-in-time reordering means that when a sudden disaster hits, stores run out of items quickly. After about 12 hours, we are back to 1930’s level society, or worse.

When society is reduced to day-to-day survival, many with emotional or mental disabilities exceed their ability to cope and succumb to their disorders. The inability of many persons with disabilities or access and functional needs to pull their own weight can subject them to the cruel calculus of survival. Families with loved ones in these circumstances should consider and plan now how they will continue caring for them. One example of a family with an adult Down’s syndrome child is detailed in this book.

The Art of the Deal is real

Successful survivors must have the gift of gab…the ability to sell one’s self and trade valuable information for food or protection is vital. Persuasion is a skill worth its weight in gold and the ability to trade and barter, priceless.

Be prepared to use what you find

You can’t open a soup can or wine bottle without an opener or a drain a gas tank without a siphon hose; opportunities may present themselves along the way and some planning and forethought can make a difference.

In our everything-is-available-on-the-internet world, something as simple as a paper road map can be incredibly useful post-disaster. Annotating that map with notes about bridges out or roads blocked consolidates multiple sources of info in a more valuable way. Collecting detailed maps of your area and surrounding states is an inexpensive prep.

The Road is not where you want to be

Every society needs a justice system with consequences for violating rules. In Lucifer’s Hammer, the good guys hanged those who were sentenced to capital punishment; short of hanging, the next most severe punishment was being banished to The Road. Being evicted meant you were no longer able to share food, protection, and fellowship with the good guys. The Road almost surely guaranteed slow starvation and death from lack of food or from marauders.

The Most Important Lesson

Lucifer’s Hammer is just a story, one that The Survival Mom and I both enjoyed. You have the opportunity to write your own story, for the most part. Have a plan, stock your home, have some way of protecting yourself, and you and your family may live happily ever after.

*The End of The World as We Know It 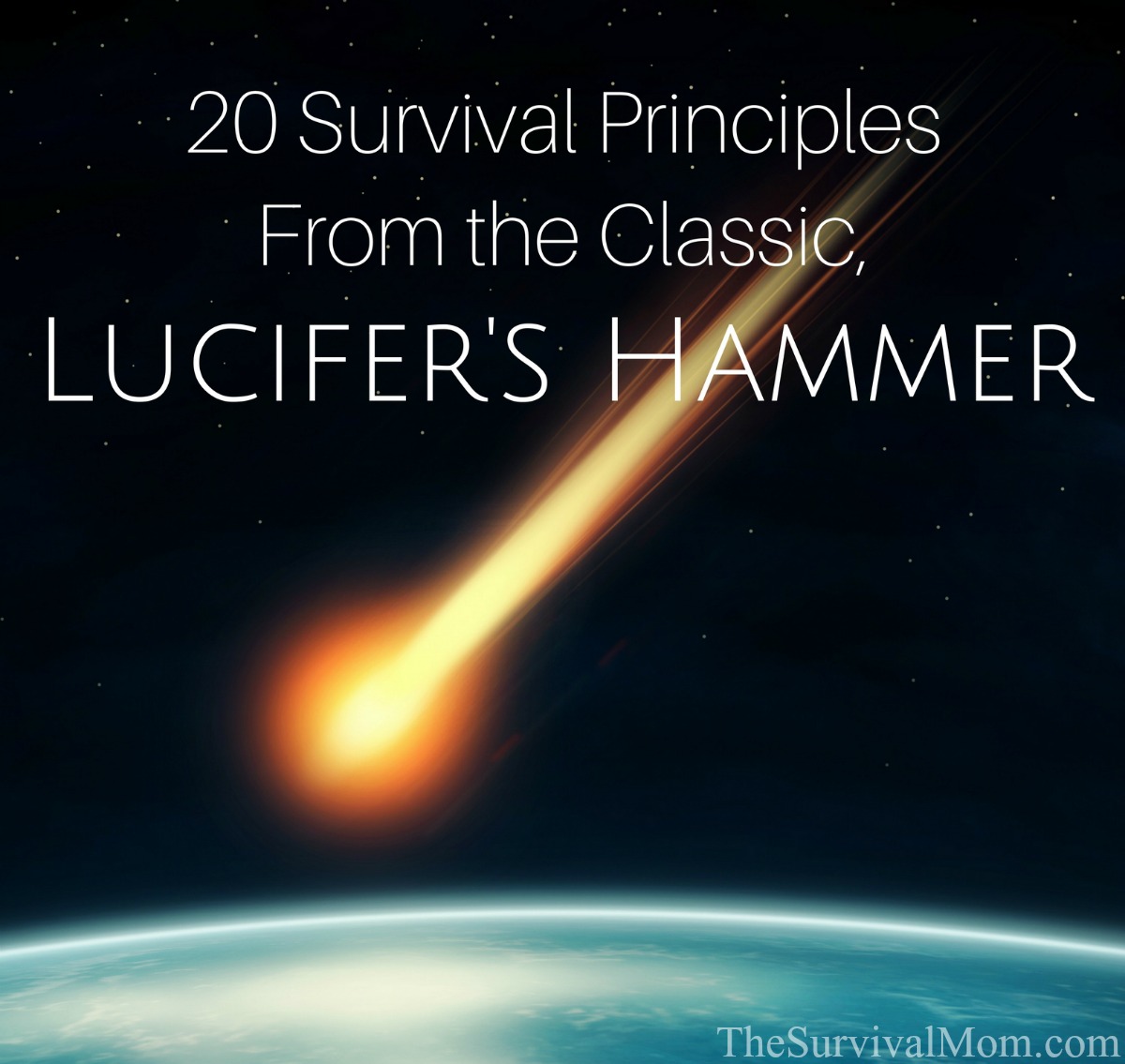 7 thoughts on “20 Survival Principles From the Classic Book, Lucifer’s Hammer”