Skip to content
292 shares
Some of the links in this post may contain affiliate links for your convenience. As an Amazon associate I earn from qualifying purchases.

If you’re looking for a beautifully written book that will captivate you from the very first page, you’ll enjoy The Nightingale by Kristin Hannah. This book tells the story about two sisters in World War II-era France, Vianne and Isabelle, and the very different paths they take to survive. 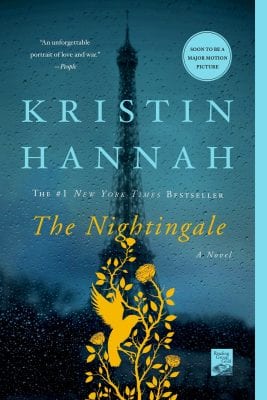 During the war, the Germans took over France and that included moving German soldiers into the homes of French families. Vianne and Isabelle have to deal with the Nazi occupation, and each chooses a very different response and path. The book can totally be enjoyed as a novel, but if you read it through the eyes of a prepper and look for lessons of survival, you’ll find plenty of them.

When we think of preparing for everyday emergencies and worst case scenarios, we can make lists, think through possible scenarios and what we might need or do, but the vicarious experience of a good story can help preppers think outside their own imaginations. The story can also present us with unpleasant and difficult realities we hadn’t considered.

When I was reading The Nightingale, I was struck by the very clear lesson that having “stuff” like food and clothing is only part of survival and maybe even a minor part in a severe scenario. Your mind, your mettle, and your skills are all essential, but the decisions you make about which actions to take may make the difference between life and death. Here are 5 survival lessons I learned from this excellent, well-written book.

Your stuff isn’t actually yours

Even with the most careful planning, it’s entirely possible your food stockpile might be confiscated or otherwise lost in many different scenarios, from anti-hoarding laws to floods and fires. There’s a sense of security when we’re prepared with stocked emergency kits, a full pantry, and other necessary preps, but the characters in The Nightingale saw their food and other supplies confiscated almost immediately. The characters were forced to be creative from the very beginning of the crisis. Stockpiles can be stolen or ruined, so modern preppers need to consider what that might mean, such as having multiple locations for supplies, and ways to defend them.

Multiple locations might simply be having a couple of buckets with enough meals for 4 or 5 days stashed in a back closet, two more under a bathroom sink, and another two buckets in a spare bedroom. “Multiple locations” doesn’t necessarily mean separated by miles and having cached supplies out in the boonies.What survival lessons can you learn from the best-selling novel, The Nightingale? Here are the 5 lessons on my list. Click To Tweet

The characters in the novel quickly realize how important it is to just stay warm. Keeping warm during winter becomes a huge priority. Limited firewood and fuel plus threadbare clothing meant changing sleeping arrangements and otherwise being creative. Even if you find yourself out of supplies and in a critical situation, you may still have to stay where you are no matter the weather or other circumstances. In the novel, characters were forced to stay because of the German occupation, but you might be forced to hunker down due to damaged infrastructure, an injury, or any other number of reasons. It may be a good idea to think through what that might mean in your situation.

If your preps and supplies are gone or have become minimal, this is where the other 4 lessons come into play.

The power of your mindset when it comes to handling a disaster can’t be overstated. The characters in The Nightingale deal with a variety of situations in which they must maintain clear thinking, accept their new reality, and make difficult decisions over and over. Several dilemmas in the story had to do with deciding who to trust. This can be difficult even during good times, but when deciding who to ask for help or even with whom you can be honest can mean life-or-death in some SHTF scenarios, such as an enemy occupation.

One interesting lesson from the story was that the town gossip can actually be a useful person, even if you don’t otherwise trust him or her. It was also clear throughout this story — as in any emergency — that everyone involved will have to grasp the new reality again and again. In fact, a rapidly changing situation may mean a whole new set of social rules, shifting economic conditions, and even varying levels of safety. The ability to quickly grasp reality as it changes means you and your loved ones have a better chance at survival. Once you recognize your new reality, whatever it is, you have to be prepared to make immediate decisions.

Frequently in a disaster of this nature, there aren’t very many clear-cut, easy choices. In The Nightingale, the characters’ values were frequently at odds with doing or saying something to keep a loved one alive. Guilt and doubt became a daily mental struggle and required them to rely on their emotional mettle.

Your mettle will make a difference

Having the emotional fortitude to survive a disaster means managing your emotions under intense pressure. Characters in The Nightingale dealt with constant stress, which in itself takes an emotional toll. But they also suffered from intense loneliness, not only from separation from the people most important to them, but also for lack of basic friendships, and even just trustworthy neighbors.

Enduring year after year, surviving without knowing when it might come to an end also requires significant emotional stamina. Most preppers focus on surviving the initial brunt of an event, unaware the aftermath may last years, if not forever. Have you taken that into consideration?

Dealing with grief and loss looks much different in a crisis, as well, since so much time and emotional energy is devoted to daily needs. Additionally, grief may stack on top of grief fairly quickly. But once the crisis period ends, it also takes significant fortitude to find a new normal, picking up the pieces of life and moving forward especially if you’ve lost people close to you. The women in The Nightingale had to contend with all of these, and modern-day preppers in long-term survival situations will as well.

Once you’re out of food and firewood and stuck where you are, your skills become critical to survival. In The Nightingale, the main character already knew how to stretch a meal, can food from her garden, and cook from scratch. She also knew how to sew and mend clothing. Even so, all her skills were tested with increasingly extreme situations.

Any prepper who thinks they’ll be able to “figure things out” during an emergency is kidding themselves. If you don’t already have some of these skills in place and well practiced before an emergency hits, the stress and intensity of the situation make it highly unlikely you’d be able to learn something new. But on the flip side, having established skills like these means you can increase your chances of survival by adapting as you go.

We have at our fingertips just about everything we need to learn all these skills and many, many more. Between YouTube videos, sites like Udemy, and resources on Amazon and in local stores, there’s no excuse to not learn any number of the skills on this Master List of Practical Skills.

Your daily decisions and actions make a powerful difference

And finally, The Nightingale gives readers the chance to consider what actions may be required beyond mere survival. Characters in the story made choices to actively or passively try to change the situation around them. One sister actively resisted the German occupation and constantly faced imprisonment and death. But the other sister chose to passively resist and also faced imprisonment and death. Both did as much as they felt they could do to change the situation around them. In a modern SHTF scenario, you may also have to decide whether attempting to actively change your situation through action is necessary and what that may require of you.

As a can’t-put-it-down historical fiction novel, The Nightingale presents plenty of situations that should make preppers think about what a SHTF scenario might really mean.

Have you read this book, or another good survival story recently? What lessons did you take away?

5 thoughts on “5 Survival Lessons from The Nightingale”