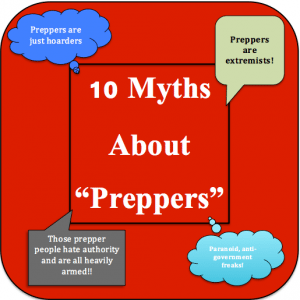 Use the term “prepper” and most people’s minds will think about the “Doomsday Preppers” show on the National Geographic channel. They glance at you with a wary eye or an outright laugh and call you an extremist, or they may suddenly have an appointment they need to get to.

There are extremists in every group no matter what the subject and the truth in just about all of the possibilities is that most people fall in the middle somewhere. Thanks to Hollywood, most of America believes the behavior of those portrayed on television is the norm and that all preppers are like that. The truth is, even true preppers think that some of these people are extreme.

When I talk to people, I usually say I am a homesteader because it is more readily acceptable to society. I can forgo the funny looks or snickers when I walk in a room. Ironically enough, it is usually me who is chuckling at the ‘sheeple’ who have had the skill of independent thinking and providing for themselves leached out of them.

They do not realize that a ‘homesteader’ who gardens and preserves the food for the winter is not much different than a prepper. The average prepper stocks up on supplies the same as a homesteader does. In truth, there is not much difference; both seek to be self-sufficient and survive unforeseen events that may come their way.

When I used to tell people that I was a prepper, the questions just blew me away, and this was before Doomsday Preppers came out. The following list is some of the most common questions and myths that I have heard or have been asked. Some are downright insulting and others laughable. Overall though, I can say with confidence that for the majority of the people out there who consider themselves preppers, none of these are solid truths.

As I said above, there are extremists in every group or social gathering all over the world. These people define the far reaches of what is acceptable and the majority of us hang out somewhere in the middle.

Speaking for myself, the only thing I am extreme about is trying to learn how my grandparents did things and how they got by. They were more self-reliant and that is my “extreme” goal. I do not want to have to rely on the grocery store as much, or worry if my city drinking water is actually safe to drink.

Being prepared is about having enough ‘stuff’.

This could not be further from the truth. Sure, your chances of making it through whatever disaster will be increased if you have the right items to stay warm and hydrated, but even if you have the most expensive canvas tent money can buy, it does you no good if you cannot carry it, set it up, or know how to make sure it doesn’t get blown away. The item itself is great, but if you do not have the skills to use the item, it is just so much junk. Worthless. What good is having a lantern to light your way if you have no skill in how to light it? Skills trump, period.

Paranoid about the government.

“I bet you really hate politicians and cops then, right?” I was actually asked this once and all I could do was stand there with a shocked look on my face, mouth slightly open, trying to determine if I had heard him right. It took everything I had not to ask him if he was a special kind of stupid before explaining that in general, most prepper types have no issues with authority figures until such a time as their rights are infringed on. That is not an extremist point of view, that is basic human nature.

Images of warehouses filled to the ceiling with freeze dried and packaged food, shipping containers of toilet paper and first aid supplies, and don’t forget the ammo.

This is how preppers have been portrayed on television and again, most people take it as the norm for preppers. Someone asked me if, when we got our property, would we build a warehouse to store the food. I chuckled and replied, “How could I build a warehouse when I would have just bought a house? Oh, and where am I going to get the money to buy the stuff to fill the warehouse?”

The bottom line is that most people cannot afford to buy a year’s worth of toilet paper in one go, or fill the cupboards with enough food to last 6 months for a family of 4. We get by the same as most anyone else, usually paycheck to paycheck.

This one cracks me up. There was an episode of Doomsday Preppers where the guy had a grenade launcher. I laughed so hard that I had to pause the show. Who has a grenade launcher as a normal thing in your arsenal? Why do people believe (some strongly) that preppers have dozens of guns and thousands of rounds stashed away to kill everyone off who tries to get too close. The reality takes us back to #5: who can really afford all of that? Most people cannot, especially in this economy.

They are prepared for anything.

Again, this one cracks me up. A lady once said that I am not a real ‘prepper’ unless I am prepared for any situation, even the ones that are highly unlikely to happen in my locale. Why would I be prepared for a tornado in Southeast Alaska? We barely get thunder and lightening storms here, let alone the right conditions for a full blown tornado.

No, most preppers have already considered the higher threats from Mother Nature in their area and taken steps to provide for, during, and after the event. Truth be told, at the end of the day we all need the same things regardless if it was an EMP or an earthquake that caused the disaster.

Preppers have plenty to spare.

This touches on points made in # 5 and #7. We are NOT prepared for absolutely everything and no one really can be. I don’t know anyone who is working toward being self-sufficient or prepared for emergencies that have anything to spare whatsoever. That does not mean we wouldn’t help some people out but to think and believe that preppers will just hand out supplies to whoever without expecting anything in return is unrealistic.
They all have a bunker or cabin to bug out to.

Someone asked me if I chose a cabin or a bunker for my bug out location. When I replied neither, I was laughed at and told that I wasn’t a real prepper. Truthfully, I silently snickered at the person thinking about their level of ignorance, but it got me to thinking. In almost all of the episodes of “Doomsday Preppers”, people had someplace to hunker down and hide.

The truth is, most preppers can barely afford their rent or mortgage, let alone a second one for a bug out location. We rent and would largely be stuck in place but should we need to get out of town, there are people in our group who have property we could head to but we own no bug out location of our own.

Preppers WANT something to happen.

This is the clincher for me. This one gets my blood hot. I imagine in this wide and varied world of ours that there are preppers out there who actually watch the news with bated breath, actually hoping that some catastrophe will happen so they can climb into their bunkers with 5,000 rounds of ammo and MRE’s to feed on for 5 years, but I have yet to meet one.

If I did meet one, I would ask them if they had taken their meds that day. To actually wish or want something that could kill off the larger population or even kill the planet overall is ludicrous! I do NOT want something horrible to happen that would cause me to need my skills and the bits of provisions I squirreled away. I would much prefer to have them and never need to use them.

As you can see, there are some crazy ideas and myths out there about what a prepper is, does, and thinks. Your grandparents called it normal living. Your children call it prepping. I call it smart, forward-thinking. Whatever you call it, be realistic and moderate when you consider preparing for getting through emergencies!

Latest posts by LeAnn in Alaska (see all)