Skip to content
40 shares
Some of the links in this post may contain affiliate links for your convenience. As an Amazon associate I earn from qualifying purchases. 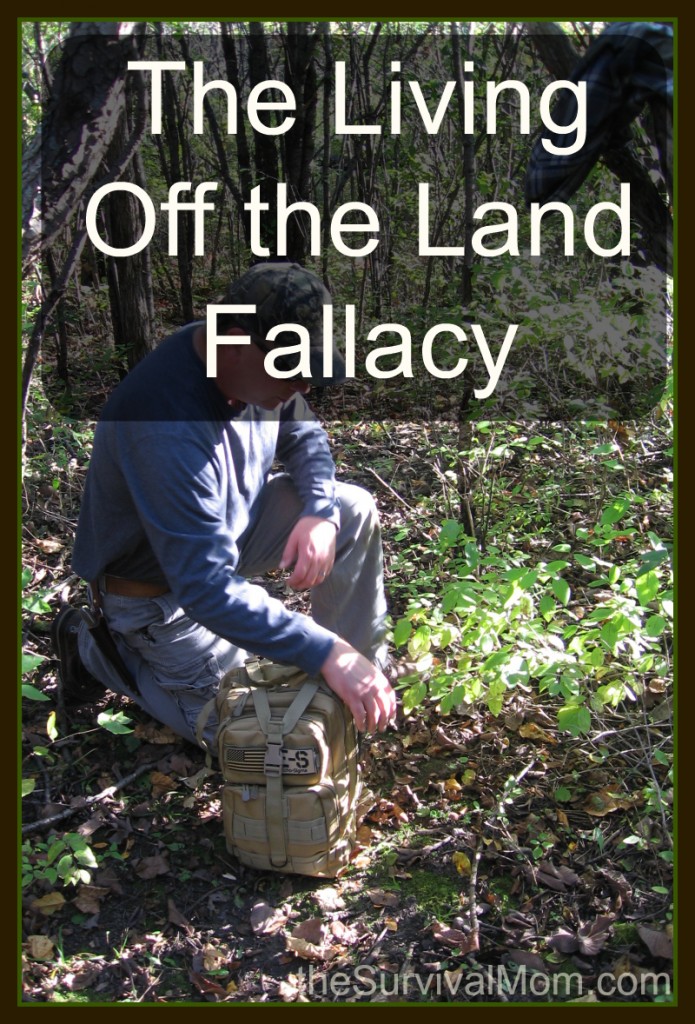 A common plan tossed around by survivalists and preppers is this idea that in the event of martial law or some other crisis, they are going to head off to the hills, presumably for weeks or months, and just live off the land.  While this sort of plan might appeal to the pioneer and bushcraft spirit, if nothing else, the reality is that for most people, this is just planning to fail.

There are a few problems with falling into what I call the Living Off the Land Fallacy.  For starters, while the DNR isn’t likely going to be enforcing fair hunting rules, you aren’t going to be the only goofball out there with a rifle or bow.  If you’ve ever gone hunting with someone brand new to it, you know just how frustrating, even dangerous, it can be.  They don’t know how to be quiet.  They want to take shots that are risky at best.  They just don’t know what the heck they are doing, right?  Now, multiply that times a thousand as there are going to be a ton of other folks, just like that, out there looking for their own dinners.

On top of that, it won’t take long before tens of thousands of house pets are going to turn feral and be competing with you for the small game.  Granted, some folks might look at that as just being an addition of potential targets for lunch.  Even so, competition is going to be fierce.  It won’t take long before even the ubiquitous squirrel is scarce.

What about fishing?  Okay, not a bad plan but do you really think you’re going to be the only Babe Winkelman out there wetting a line?  Plus, likely as not you’re also going to have at least a small segment of the population who will sit on the sidelines and wait for someone to reel in a good sized bass, then take it from them by hook or by crook.

I grew up in an area where deer hunting is akin to religion.  The school district darn near shuts down during gun season, given how many students head up north with their parents to see about adding a trophy to the wall.  These people have been hunting for generations and know all the tricks.  Yet, for all of that, only about a third of them are successful in a given year.  Granted, that’s big game, but still, food for thought.

As for wild edibles, that’s something to consider, but you need to know what you’re doing so as to avoid poisonous lookalikes and such.  Plus, consider the fact that the crisis may hit in the dead of winter, when not too many things are growing in abundance.

Don’t get me wrong. I’m not suggesting you abandon all plans for hunting/fishing/trapping/gathering.  Instead, consider those options as ways to supplement what you’ve stockpiled and grown on your own.  Generally speaking, the plan would be to have enough food packed away to get you through at least one, if not two, complete growing seasons.  Have plans in place for growing much of your own food from seeds you harvest yourself.  Raise chickens, goats, and other potential meat sources.  Learn now the best ways to preserve meat if you don’t have access to electricity, and thus freezers.

Above all, abandon the attitude of “Me hunter. Me go kill meat for family.”  That way of thinking will indeed likely result in a death, but probably not of the four-legged variety.

55 thoughts on “The Living Off the Land Fallacy”