Skip to content
23 shares
Some of the links in this post may contain affiliate links for your convenience. As an Amazon associate I earn from qualifying purchases. 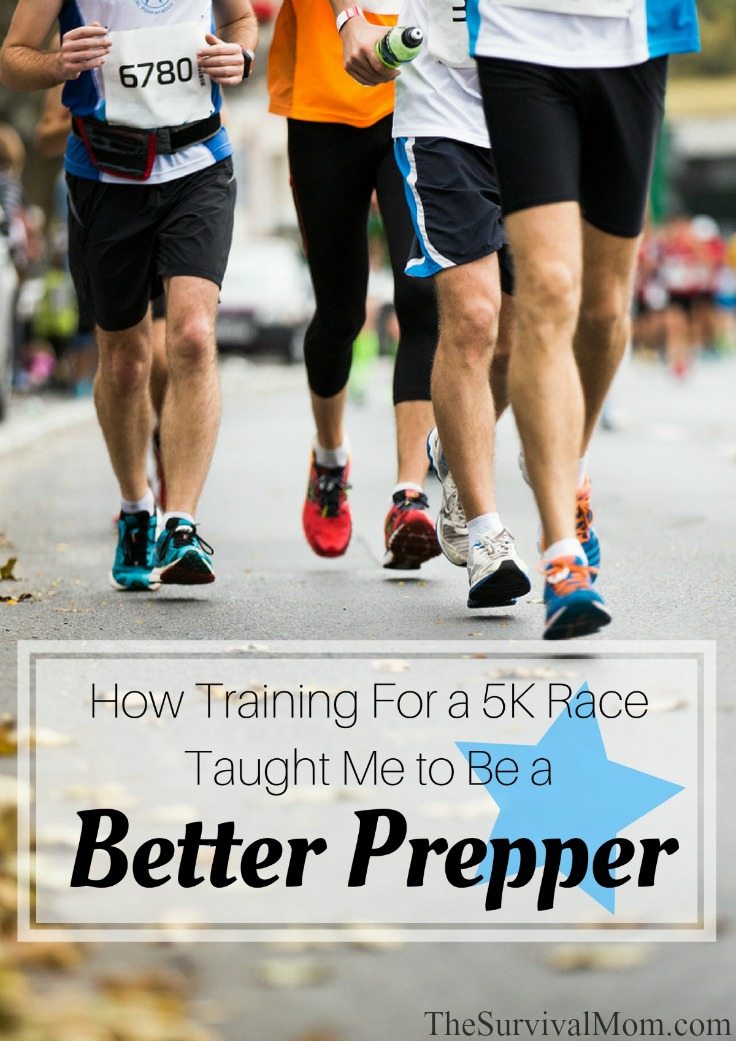 When I sat down last December to write down my goals for the year, I knew one of them had to be getting in better shape. Many preppers know they need to be in good shape to survive hard times. I decided 2016 would be the year I would try to become a runner. There is an annual 5K/10K/half/full marathon race near us every fall, so I registered for the 5K in January and started on the path to better health. I also learned several lessons along the way that taught me how to be a better prepper.

Part of my motivation is the extra baby weight I carry from having children. I’ve spent many years just focusing on the number on the scale and have realized that it wasn’t a great motivator. My weight would fluctuate, and I would feel discouraged rather quickly. Also, I wasn’t getting a full night’s sleep on a regular basis and that made it hard to work out consistently.

So, my goal changed from losing weight to increasing activity. Running is an activity that should be done consistently and constantly. It requires a commitment of a few days of every week to see improvement. I started focusing on my health and knew that the weight would eventually come off.

The first thing I had to do after registering for the 5K was to decide how I wanted to train. There are many programs out there that work for a lot of people (Pinterest is full of them). Couch to 5K is a very popular training plan. However, I didn’t think that would work well for me. I wanted to train to become a runner, not just run one race. I decided to just start running and add to my time bit by bit. I planned for 30 minutes on the treadmill and I started with jogging for 3 minutes and walking the rest of the time. Then, when that got easier, I tried jogging for 5 minutes, but not less than 3. Then for 7 minutes. At about that point, I realized I was jogging for half a mile. That was then my baseline and I added distance and increased speed.

I was careful to only increase my time, distance, or speed in small increments. I would stay at the same rate for at least a week before moving on to the next increment. There were times due to lack of sleep or sickness that I stayed at the same rate for 3-4 weeks, but I never went lower than my most recently established baseline. I did this to not get discouraged and also to avoid injury. I wanted to do my best to insure I would reach my goal.

And I did! In September, after training for eight solid months, I ran a full 5K. There was a hill I wasn’t expecting, but I ran up the whole thing. I did have to walk for 30 seconds a few times, but I think the hill cancelled out those walking times. I felt so good finishing the race.

Throughout my training, I realized there wre several lessons I learned along the way that also apply to being a good prepper.

Learn what works for you

Every situation preppers face and prepare for is different and unique. One family’s plan for a hurricane may be different from another family’s but that doesn’t mean one is better than the other. Each person and family has to decide what is best for them after evaluating the type of threat using a threat analysis like this one, the resources on hand, and what the family can handle financially and otherwise.

When I first started running, I only had loose workout pants, old tennis shoes, and sports bras meant for walking. I quickly realized that I needed the right equipment if I wanted to succeed. Blisters and backaches were not going to help me achieve my goal. I spent the most money on a good pair of shoes at a store that looks at your feet and gait – it was worth every penny! I found good deals on workout clothes and supportive sports bras. Some runners swear that something like a FitBit that tracks their calories and steps is invaluable, while others use a simple pedometer. The right clothing made the running more enjoyable, which encouraged me to continue.

With prepping it’s key to prepare for situations with the right equipment, too. If the spare pair of shoes under your bed are the old pair that gave you blisters, then you’re going to get blisters if you have to use them in an emergency. It can be an investment to have the proper equipment, but it will make surviving easier.

I had a support group through Facebook that helped encourage me as I was training. We offered each other encouragement, tips, and motivation. I tried running a practice 5K by myself early in the summer, and I found myself running too fast and then stopping to walk too much. When I ran the 5K in September, a friend ran with me and kept me at the right pace and encouraged me to keep running when I wanted to stop. A group like Skinny Survival Moms can encourage you, too.

Having friends to help you prepare can be encouraging, too. I have two friends that I talk with often and we share tips and things we’re noticing in the world to help us all be better prepared. It’s nice to not feel alone when you’re facing a big task.

As I explained, I took my time training for the 5K. I knew I wouldn’t be going from walking 30 minutes three times a week to running a 12-minute mile in a few weeks. I made small goals that I could attain and then set another goal. Having small accomplishments along the way made me feel good and kept me motivated.

The same can be true of prepping. You probably won’t have a ton of skills and three months of food storage in a matter of weeks. It takes time, but you can set small goals of learning a skill or getting a single week’s worth of food and then feel good about meeting that goal. Then you set the next goal and keep going. After time, you’ll look back and see that you’ve accomplished a lot. Running is something that must be constantly done to maintain or improve and prepping is the same way. There is always something to do!

In the end, determination makes a difference

Being a successful runner is more than just a physical endeavor. It is also a mental and even spiritual game. I did a lot of talking to myself, doing mind tricks to run farther, and I did a lot of praying. I really, really wanted to accomplish this goal and that sense of determination kept me going on the days I felt like skipping the workout.

If there is a skill you truly want to learn, you will find the determination to make sure it happens. If you want to become a HAM radio operator, your desire will ensure you find the time to study and pass the test for your license. Saving money to buy extra food and equipment can also require the sense of determination. The stronger the desire, the more determination you’ll have.

TIP: Many Survival Moms use the 52 Week Savings Challenge to meet savings goals. You can read all about it here.

You don’t have to train for a 5K in order to learn how to be a better prepper, but in my case, I realized how important it is to customize my prepping, get encouragement from others, invest in the right equipment, and, above all, never quit. 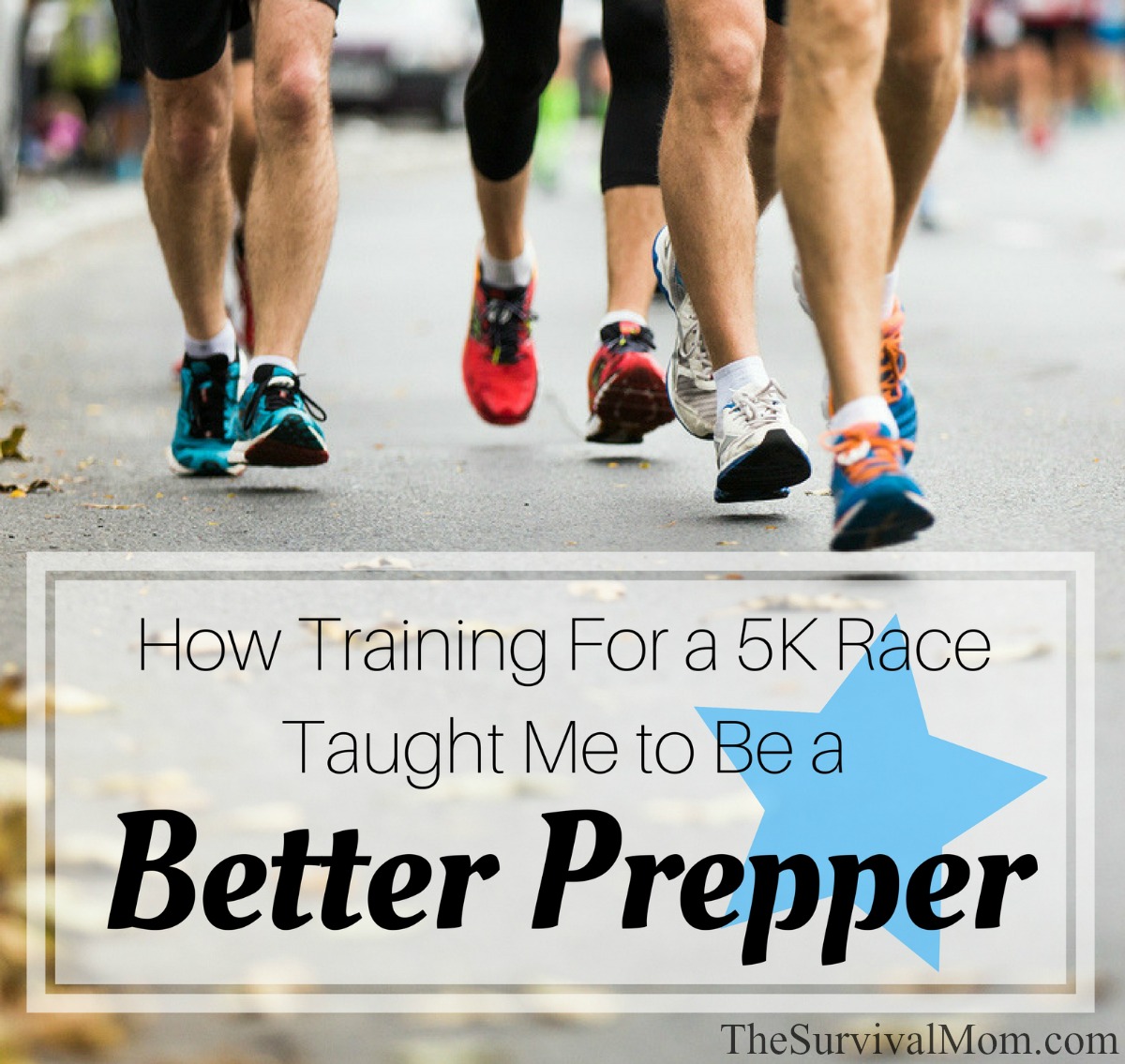