Skip to content
18shares
Some of the links in this post may contain affiliate links for your convenience. As an Amazon associate I earn from qualifying purchases. 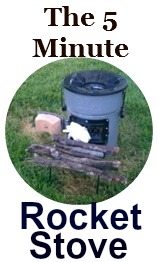 Rocket stoves come in many shapes and sizes, from store-bought cast iron models to DIY projects made from tin cans. No matter the size or materials, the basic design remains the same — a small combustion chamber at the bottom and a vertical chimney that provides updraft.

The idea behind a rocket stove is that it uses a relatively small amount of fuel to create high heat. So, rather than building a campfire just to heat up water for coffee, wasting a fair amount of fuel, you can fire up a rocket stove, use far less fuel, and get that water boiling much faster.

Now, a word of warning. This project isn’t a perfect rocket stove like the one pictured. This is just a quick-n-dirty one you can put together in less than five minutes. It works, and works well, but it is far cry from a “real” rocket stove you could buy in the store or build with better materials and more time. The goal here is to give you one more option for off-grid cooking, that’s all.

For this rocket stove, you’ll need 20 bricks. Not cinderblocks, just plain ol’ bricks. Patio pavers work well. You can pick these up at any home improvement store as well as most garden centers. They should cost you less than $0.50 per brick, so your total investment here is about ten bucks or so. You’re only going to actually use 19 of them but buy an extra in case you mess something up.

Note: you DO NOT have to use fire bricks for this project. The heat generated by this rocket stove isn’t nearly enough to cause bricks to explode or anything like that. We’ve used these same types of bricks to build a couple of different fire pits and the worst that has happened is a few of the bricks have started to crumble after a few years of use.

After you’ve acquired your bricks, the next step is to break one of them in half. This is not nearly as complicated nor involved as you may think. Here is a great article on how to do it with just a hammer and chisel.

You can build this rocket stove either on your patio or directly on the ground. Part of the beauty of this project is it is so quick to assemble and take down you don’t need to find a permanent location for it.  Start with laying out the first four and a half bricks like this. 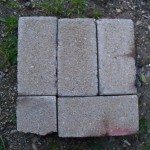 The second layer looks like this.  Note the placement of the half brick. 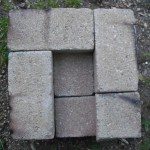 Then, the third layer. 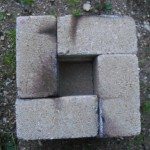 And finally, the fourth layer.

Now that the stove is completely assembled, gather your fuel. You’ll be using branches and sticks. Find dry ones that are no thicker than your thumb. Break them into lengths of about 8-10 inches or so. This isn’t absolutely necessary, but I’ve found working with that length makes things easier.

To get things going in your stove, start with a handful of tinder, such as newspaper or dryer lint. Put that into the bottom of the stove and drop in a lit match. As it begins to burn, add in some torn cardboard or dry tree bark. Once that is burning well, begin to feed in a few sticks at the bottom. Be careful to not overload the combustion chamber as you don’t want to inhibit air flow. It shouldn’t take more than a minute or two for everything to be burning fairly well.

When you want to start heating your food or water, place one brick on each side of the chimney, like so. 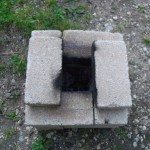 You’ll then place your pot or pan on those, rather than directly on the chimney hole, effectively sealing it shut. If it is breezy outside, you may want to add one more brick as a wind screen. This helps to further concentrate the heat.

Continue adding fuel to the bottom of the stove as it burns. Once you’ve played around with this rocket stove a bit, you’ll get a feel for how often you’ll need to add more sticks.

The first time I tried out this project, I was able to get water boiling within seven minutes.

The downside to this project is that because the combustion chamber and chimney aren’t fully insulated, you won’t always get complete combustion of the fuel. Rather than reducing the sticks to ash, you’ll still have charred remnants. In other words: you can’t expect to run this stove for hours on end as it will fill up on the inside. However, this rocket stove works great for heating up a can of soup or boiling a couple of quarts of water at a time.

The best part is you can just keep the bricks sitting in the garage or shed until they are needed. As I mentioned before, you don’t need to have a permanent location for this stove, just build it when and where you need it, then disassemble it after it has cooled down.

4 thoughts on “The 5-Minute Rocket Stove”