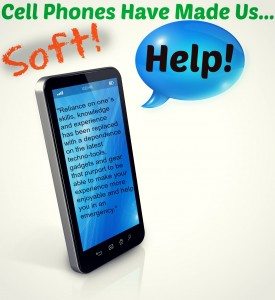 How can cell phones and other technology affect our ability to survive?

Technophilia: “a strong enthusiasm for technology, especially new technologies such as personal computers, the Internet, [and] mobile phones.”

Caution! The following story is true. Names have been changed or omitted to prevent embarrassment of the woefully ill-educated, miss-informed, and unprepared in this cautionary tale…

One morning, about a month ago, I was in the parking lot of a popular hiking area in the Colorado Front Range. The small dirt lot, surrounded by mixed forest on three sides and a meadow on the fourth, was overflowing with vehicles. This was no surprise as the fall colors were peaking. People were out in force to take in the views, and so was I.

Leaning against the bumper of my car, enjoying the morning sun, I switched my flip flops for hiking shoes and got ready to don my daypack. I looked up from my task and took in the scene around me. There were at least fifteen people milling about, readying gear and preparing to hit the trails. What I found so striking is what I have come to call the surefire hallmarks of the unprepared.

As hikers left the parking lot and headed out on various trails, I could see only three day packs, one camelbak, and couple of water bottle holders on hips. These weren’t nearly the size of packs necessary to hold basic personal and emergency gear for a day hike compared to the number of people in the group. Notably, I also saw nine cell phones (OK, ten if you include mine). Wait a minute, ten cell phones?

You heard me correctly. Ten cell phones either in hand, up to an ear, attached to a belt, in a pocket, or secured to a pack strap. Oh, I almost forgot, and one iPad, as well as a set of earbuds in use. I later found out the iPad was for taking pictures. Really? An iPad for taking pictures on a hike and earphones to drown out the noises… of nature? But, I digress, back to the tale at hand.

In short order, I shouldered my daypack, took one last look at the trail map, put it in my shirt pocket, and started my hike. The day turned out to be beautiful. The weather was mild, the trees and shrubs were aflame with brilliant fall colors, and the vistas were breathtaking. I was so enjoying the day, but that was about to change.

Four miles out from the trail head, about a mile from the end of the hike, I was following a bend in the tree-lined path and came upon a scene of mild pandemonium.

A family of four and two additional hikers were massed on the side of the trail. The dad was in obvious distress, sitting up against a tree and holding his right ankle. The mom was hovering over him with her cell phone to her ear trying to call for help as their young daughter was clinging to her leg, frightened and crying softly. Meanwhile, the couple’s twelve year old son was five yards away kneeling at a small stream filling the family’s one and only water bottle, emptied before the hike ended, so he could give his dad a drink.

To add to the mix, the two other hikers, poised near the dad, each had their cell phones out. One was dutifully attempting to read a first aid app and the other trying to make a call for help, as well. There was no cell service on this part of the trail. The scene would have been comical if it wasn’t so potentially dangerous.

I quickly introduced myself and took control of the unfolding situation. Following a head-to-toe assessment of the dad, his ankle was padded and wrapped in an ace bandage from my pack and immobilized in a makeshift splint constructed of materials at hand. After asking about signal strength, I had everyone stop attempting to call for help so we could conserve battery power for later use if need be. Mom gathered the kids up and calmed the daughter. I asked the two hikers to go ahead together and find or call for a ranger. Dad was able to hobble out with assistance. The family and I slowly walked the last mile to the cars. Everyone made it safely off the trail.

At the parking area, the ranger, who had been on patrol nearby, asked some questions of the group. Come to find out, none of the adults had any first aid training or a first aid kit.  In addition, had weather or circumstances dictated it, the group didn’t have the basic or proper gear to spend an unplanned night out, not even a headlamp or flashlight to assist in an forced night hike. Markedly, five out of the six people in the group had cell phones so they could “call for help if they became lost or hurt.”

The Point and My Opinion

The issue is much broader than just cell phones. As our country has become urbanized and citified, and a growing portion of our population has become afflicted with technophilia (yes, this is a real state of being and word), it has become painfully obvious to me that the  meaning of preparedness, self-reliance and self-sufficiency has become bastardized and in some ways lost.

Reliance on one’s skills, knowledge and experience has been replaced with a dependence on the latest techno-tools, gadgets and gear that purport to be able to make your experience more enjoyable and help you in an emergency. But what good are the gadgets without the understanding of how to use them effectively?  And even more importantly what are their limitations, as in this case of the unusable cell phones?

National search and rescue statistics consistently show that day hikers are the ones most likely to need help. Additionally, in a report entitled Search and Rescue Trends Associated With Recreational Travel in US National Parks, the authors found that,

“[t]here is a general feeling among many SAR ’(Search and Rescue)’ unit managers in the United States that cell phones are being used to request…assistance in what turns out to be minor situations. They may also be used as an excuse to take extra risks because help is only a phone call away.”

I think in the event I described, both of these statements apply. With the advent and advancement of cell phone technology, many hikers and outdoor enthusiasts alike have become lulled into a false sense of security and complacency instead of acquiring the basic knowledge and skills needed to safely enjoy the great outdoors.

Don’t think you are exempt just because you are a prepper, survivalist or homesteader and “don’t really do much day hiking or backpacking.” No matter what you call yourself,  it is vital to master survival basics.  I know they are not flashy, don’t have a big “wow” factor,as many of the latest gee-wiz techno-gadgets, but they are essential. Let’s face it, for most people, learning how to build a basic shelter, filter water, or start a fire is not nearly as fun or engaging as watc 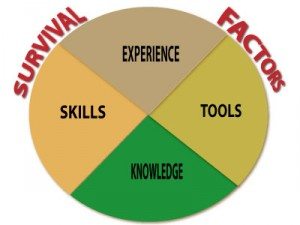 Whether it is a world event or local emergency which causes you to use your survival training and tools, it will be your knowledge, skills and experience in the basics combined with the correct gear and resources that will count the most and make a difference for you, your family and like-minded friends to be able to survive and potentially thrive.

The Challenge and Call to Action

So before you head out on that nice day hike you have been planning, ask yourself a few questions:

If the answer to even one of these questions is “no”, do yourself and everyone else out on the trail a favor, Stay home! Take a first aid and CPR class. Research, purchase and practice with your basic survival gear. Then practice some more. You can then take that hike with a high degree of certainty that if you become involved in a survival event, like I did, you will have the basic knowledge, skills, experience and tools to properly help yourself and others.

Are you a prepper, survivalist or homesteader? The same goes for you. If you cannot answer yes to all three of the questions above, instead of taking on that next task or purchase on your to-do list, complete a first aid and CPR course. Gather some basic survival gear and put it in a designated place such as a day pack. Add “practice survival skills” to your list of  to-do’s on a regular basis.

Practice in the environment you spend most of your time. Home, homestead, backyard, or even at the local park. Make it as realistic as possible, so that someday, if a emergency or survival event happens, you will be ready to respond. All the other preps you have put in place may be for not, if you don’t.

Back to Cell Phones

As for cell phones, frankly, I find them annoying and distracting when I am out hiking, whether it is mine or someone else’s. Lest you think I’m completely naive and an unrealistic prude, I know they are good for the occasional selfie, group picture or nature shot and yes, used appropriately and effectively, have saved lives. Still, I think cell phones are better turned off and put in your pocket or pack while you are enjoying your outing, and saved for a real emergency. That’s where mine stayed as this mini-rescue took place.

The Rest of the Story

The dad refused ambulatory medical assistance at the scene and was driven to the local ER by his wife, where he was treated for a severely sprained ankle and a slightly bruised ego.

As for the son, filling up the family water bottle at the nearby stream where the accident took place, I was able to prevent him from giving his dad any of the unfiltered and untreated liquid, but not before he gulped down some to quench his own thirst. I’m sure that story had its own ending…

All images and graphics belong to the the author.

Robert Camp turned his love of the outdoors into over 35 years of professional guiding and outdoor leadership. He has helped develop programs, lead trips, and taught for juvenile diversion programs, the U.S. military, The Sierra Club and many others.