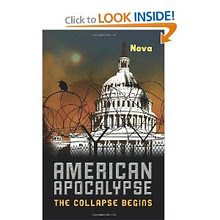 The American Apocalypse series has four-parts. The author NOVA (NoVA) lives outside Washington, D.C.   The main character lives in the general area of the city of Fairfax in the first book, and out near (but not in) Winchester in the second, although the author is less specific about the second locale.  The author also has made the odd choice to not use regular names for most characters. The main character is Gardner.  Ninja and Night are two of his friends.

This fiction series follows what happens to one normal, somewhat lazy guy when the American economy collapses. You learn about the early stages from backstory and exposition because it picks up at a point when it’s normal for people to be living in their cars or camping in the woods, and abandoned, vandalized housing developments are not rare.

The story is interesting and held my attention, although the lack of an editor left the first book with irritating punctuation errors and typos.  The characters and the environment they are living in grow and change as the collapse progresses.  There are a variety of personality types throughout the story, and it explores how they might react to the changes that occur. Everything is seen from the point of view of normal people, not commandos or survivalists or anyone with any particularly advance preparation, with the exception of one former Marine. As a side note, you can’t throw a stone in NoVA without finding military, retired or otherwise, so not having any in this story is more than a little unbelievable.

Much of what I find interesting about this series is how mundane most of it is.  For example, the author describes the waves of destruction that overtook a housing development of (formerly) million-dollar mini mansions that is about to be razed to the ground, and efforts by shopkeepers to keep their businesses open.  Unlike other books I’ve read in the genre, roadways are still generally open (depending on local conditions) and people can initially move about fairly freely.  The society that was there before is still clearly visible, particularly in the beginning when they go to a McDonalds that is still open for the free WiFi. That changes as things continue to collapse and the country becomes more third world than first world.

If you are a huge fan of hard-core TEOTWAWKI literature like James Rawles, this might not be your cup of tea. If you’re looking for a more realistic depiction of how an affluent urban area might rapidly fall apart if the economy falls apart, then you’ll probably enjoy this book.  I definitely recommend the series, although perhaps not to anyone who is driven slightly nuts by some random typos and other editorial errors.