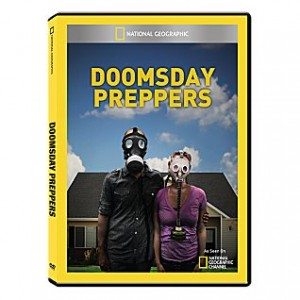 Without a doubt, NatGeo’s “Doomsday Preppers” has it all: quirky people, shock value, spooky music, and kids wearing gas masks.  What more could mainstream America ask when it comes to reality TV?  I guess it’s no surprise that the show has lured 4 million viewers each week and has already started casting for additional seasons.

The show goes out of its way to show most of its subjects as paranoid and goofy.  Each set of characters is assigned a doomsday scenario to prepare for.  In my case (I was in the pilot episode), I was assigned hyperinflation as my main concern.  Others have been portrayed as preparing for an EMP, nuclear attack, pandemics, and government takeover.  After putting their subjects through their paces, along with odd camera angles, lighting, and sound effects, the efforts of the preppers are usually undermined when the narrator says something like, “Our experts say that the possibility of this doomsday scenario are 1 in 5 million.”  The preppers are left hanging out to dry.

In spite of NatGeo’s best efforts at making preppers look unhinged, more Americans than ever are jumping on board!  Is it because they, too, want to be labeled as kooky preppers, or, more likely, does survival and preparedness make a lot of sense now more than ever?  I believe it’s the latter.  Prepping takes time, money, and attention.  There’s nothing easy about learning to can or start a garden or passing an amateur radio operator’s test and what could be less glamorous than learning how to butcher a chicken or suture a wound?

More than a fad

If “Doomsday Preppers” is reaching some 4 million viewers each week, and we already know that at least 3 million preppers lurk among us, then it’s no wonder that this movement has grown far beyond a fad.  It’s a reflection of the high level of concern average Americans have for their futures.  They have good reason to be afraid.

It’s obvious to anyone paying attention that the need to prepare goes beyond just buying bottled water and storm shutters.  Economist Marc Faber now believes that a global recession is 100% certain. Youth unemployment is the highest its been in decades.  Food prices continue to increase. Where’s the good news?

Smart people are putting 2 and 2 together and arriving at the conclusion that the government is incapable of having the right answer.  They are on their own.

Getting ready, willing to do what it takes

So in spite of the kook factor, in spite wondering what the neighbors might say, and in spite of the effort involved, America is saturated with “Doomsday Preppers.” I’ve received emails from people letting me know they are proud to be preppers after watching an episode or two of the show.

When our family was being filmed for that pilot episode, the producer made a comment that their goal was to keep people from changing the channel.  Obviously, that has been accomplished, but I wonder if they ever dreamed of the unintended consequences: millions of Americans jumping on board!  To that, I say, “Hurrah and welcome!”