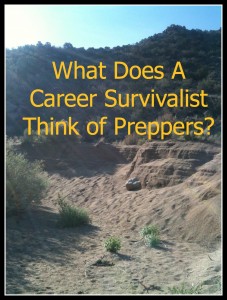 JOHN HEATHERLY:  Jim, thanks for meeting with me. What motivated you to enter the military Survival Community?

JIM WILSON: I always hunted and spent time outdoors growing up. After joining the Air Force, I met a couple of S.E.R.E. instructors at Randolph Air Force Base, in Texas.  When I learned of what these guys were teaching the war fighter, I knew it was the path for me.

JH:  From this starting point in your career, where did S.E.R.E. lead you?

JW:  We trained and operated in 34 different countries over the years, many of them were so-called “improving nations.” I completed S.E.R.E. Instructor Training in the snow at Fairchild Air Force

Base, Washington, then moved on to work in Personnel Recovery for CENTCOM at Shaw Air Force Base. Later I worked in the Special Operations Liaison Element at Hurlburt Field, Florida.  I ended up spending most of my time at Hurlburt when not deployed.

JH: 34 Countries! Please name a few of them.

JW: Sure. North and Central America (U.S., Canada, Mexico,) Panama, Columbia, Honduras, Cuba. Almost all of Europe. Of course, almost all of the Middle East (UAE, Saudi Arabia, Kuwait, Qatar, Jordan, Turkey, Afghanistan, Pakistan, Iraq, etc…,) most of Africa. During these trips I did everything from surviving to teaching survival to supporting combat operations and providing Personnel Recovery coverage.

JH:  You were away more than at home. How did your experience in these countries shape your view of survival?

JW: During combat operations, including Personnel Recovery, the environment tends to be primitive, especially in the Third World.  Sometimes I felt I should carry a bow and drill for fire craft in one hand and a high-tech radio in the other. Especially in the early days of the War on Terror, our tactics and procedures were in their infancy, so we often found ourselves isolated and improvising as we went. We learned to expect the unexpected and become self-reliant.

JH:  What survival gear was most valuable to you?

JW:  As Special Operations Units, of course we had weapons, and the additional gear that I valued most tended to be water purification equipment and often sanitation and hygiene items. I always carried multi-use items.

JH:  Why did you value these things in particular? Can you explain more?

JW:  Sure.  You hear it all the time, but rarely experience it normal life – people can actually function for days, even weeks with little else besides water. Small amounts of food, small amounts of sleep are fine, but without water, an operator or survivor can get in trouble quickly. Also, we are so accustomed to taking showers and washing our hands here. People do not realize how quickly a small scrape or cut can become a large problem in unsanitary environments if not kept clean. Daily hygiene is more than a chore in an environment where soap and hot water are scarce. It is a survival necessity.

JH: What are some multi-use items you carried?

JW: I wove a cravat through my belt-loops as a belt, knowing it could be used for medical purposes or as head-gear, etc. We used signal mirrors for both signaling and for medical inspections when acting as our own first responders. Bleach or iodine can be used for sanitation and for water purification, so we often carried them in small quantities.

Though I have used paracord quite a bit in my career, I prefer to carry lightweight, thin cordage, like surveyor’s line.  In combat, I carry brown or black.  For personal use, like when camping, I tend to carry pink line as it is easy to locate, even when dirty.  Some of my friends think that is funny! I also carry a large knife, of course.

JH: So, now you are retired from the military and spend more time at home. What do you think of the growing “prepper” movement?

JW: I see good and bad things with preppers.  Of course, the self-reliance that people are striving for is great. In reality, many of our grandparents lived daily in a “prepping” environment, and as a modern culture we have become more dependent on the system or on technology. In that way, preppers are returning to our early American roots.

On the other hand, there appears to be so much fear in the prepping community that it sometimes becomes counterproductive. Preparation should breed confidence and teamwork rather than fear. I am certainly not saying that people should ignore trends or events in the environment that can be alarming. I am saying that preppers should apply critical thinking and abstract thought in analyzing their local environment and personal circumstances, then prepare for contingencies in a way that makes them feel more confident and secure. For example, I see lots of information out there on “bug out bags.” Bug out bags are a great idea, but a random assortment of gear cannot replace the power of clear thinking.

JH: What would you say to a new student of survival who asks about bug out gear?

JW: People need to step back and consider plans that are unique to them and their environments.  They should consider actions in the short, medium, and long-term, and put gear in place for each of these durations.  I often use the term “personal emergency relocation kit” rather than bug out bag.  A kit of this nature implies a well-constructed plan, one that emphasizes skill rather than just an assortment of gear.

JH: Can you give a specific example of the plan/equipment relationship you are talking about?

JW: Yes. For example, a person should have a Life Straw or small pump-style water purifier in their car or bag for short-term emergencies.  They should also consider home units, like those made by Berkey, for mid to long-term shortages.  Containers like the WaterBOB are also essential. Multi-use items like bleach are also inexpensive and can be stored in large or small containers for water purification.  Each need, water being a great example, requires planning, and in most cases, training.

JH: You approach other survival needs, like the need for food or medical attention, in the same way?

JH: In practicing your philosophy, people need to consider self-reflection. A confident hunter in a rural setting, as an example, will need to allocate more time and attention to things like medical kits rather than just food storage. You are saying preppers need to spend more time evaluating themselves and their abilities?

JW: Yes, exactly. A person who is a nurse has medical knowledge that will shape his or her survival plan. A construction worker, for example, will probably carry less moleskin in his bag as he is less-worried about blisters on his feet when compared to an office worker. On that note, our society is softer than that of our grandparents. Rather than just store items, people need to practice. During my first trip to the woods, my hands got scratched, then half-frozen, then thawed by a fire, then scratched again. It took some time for me to harden.  I am not saying that preppers should be extreme in their training or their preparations.  They just need to be aware of some of these issues ahead of time.  Practice time brings these issues to light.

JH: I understand. After talking to you, I am thinking of how I can allocate more outdoor time into my schedule! We are almost out of time. Perhaps we can talk again soon about specific elements of survival and preparation?

JW: Yes, John. Of course. In this modern world we all could use more practice time. There is always more to learn and do. Hopefully we can reconvene soon.

JH: Agreed. Jim, thank you, again, for your time.  Where can people learn more about your work?