525shares
Some of the links in this post may contain affiliate links for your convenience. As an Amazon associate I earn from qualifying purchases. 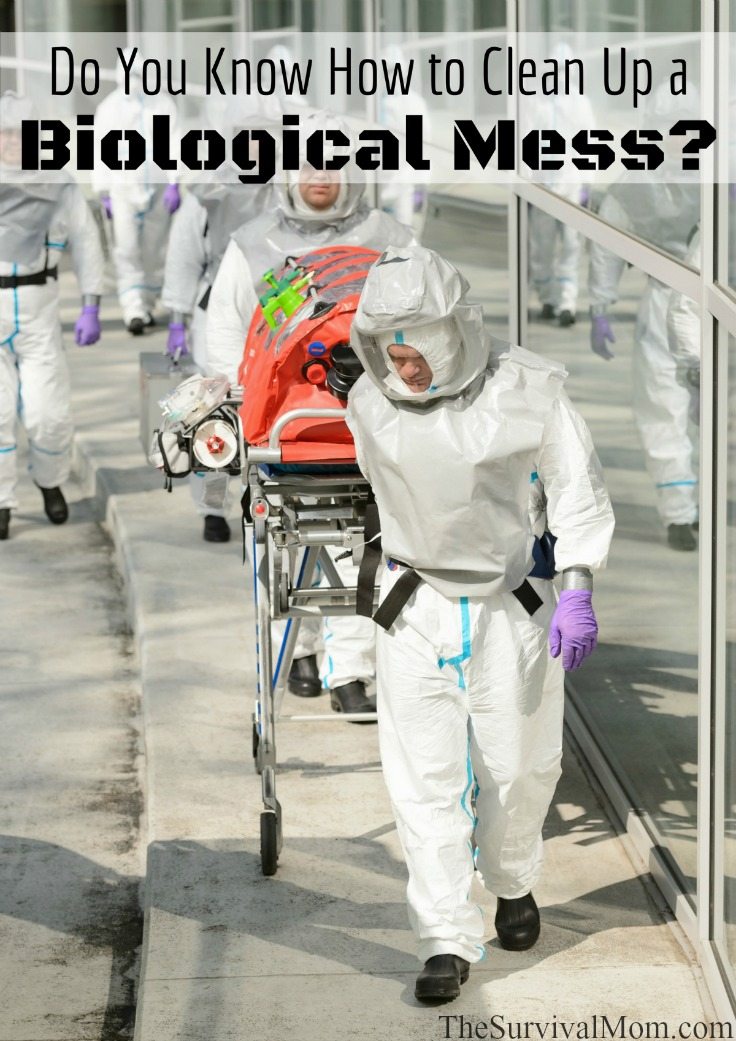 Just before Christmas, my family and I were shopping at a local big box store. Near the dressing rooms, my daughter spotted a young man totally passed out on the carpeted aisle, with a pile of vomit nearby. Since that’s not a normal thing, we immediately alerted a clerk. Being the Survival Mom, I was curious to see this store’s protocol when dealing with a biological mess like this, so I hovered in the distance to watch.

Once the young man was on his way to an emergency room, the clean up protocol consisted of paper towels, a plastic trash bag, and some sort of spray in a bottle. Thankfully, the 2 employees charged with the clean up used plastic gloves. I was surprised that the carpeted section was immediately open to customers, complete with a large wet spot, hopefully sanitized.

I don’t know exactly what type of liquid was in the spray bottle, but the CDC recommends a sanitizing agent specific to vomit and fecal accidents. Stronger than a typical sanitizer, it should be a combination of 1/2 cup bleach to a liter of water.

For businesses, the protocol used by this store’s employeees wasn’t too far off the mark. Official recommendations can vary from county to county and state to state, but most recommend segregating the area so customers don’t track through, possibly spreading germs. Some viruses can become airborne, so a disposable face mask is another recommendation, and some states recommend wearing some sort of cover.

Another common recommendation is to sanitize the area far beyond the original mess. Some germs, such as Norovirus, can spread by air and infect persons dozens of feet away, and, depending on the individual’s health condition, blood could be present as well. Ugh.

Keep in mind, businesses have no idea whatsoever what type of biological mess they’re dealing with, even if the sick person is known to them, so going above and beyond recommended protocol wouldn’t be out of line. After all, every epidemic has a “patient zero”.

Cleaning a biological mess around the house

I had a chance to read Noah’s article, “How to Prep For a Quarantine“, and was reminded of the importance of having the right supplies to deal with biological messes when they occur around the house. Years ago when my young daughter had the Norovirus, it was a horrible mess and I ended up throwing away her favorite pair of pajamas — the diarrhea mess was that bad. Looking back, we were very fortunate that the entire family wasn’t infected with this highly contagious virus.

Over the years, I’ve had to clean up after my own kids as well as their friends whenever unpleasant accidents happened in the house, the car, or anywhere else where I happened to be the responsible adult. Most of the time, these incidents happen, are cleaned up, and there are no further repercussions, but it’s still a good idea to err on the side of caution.

So what should you have on hand to deal when a diarrhea or vomiting episode looks to become something more than just a “one and done” event?

Clean up from beginning to end

First, if you spend a lot of time outside the house or often have a house full of people, you might want to buy a complete clean-up kit and have everything on hand and in one place. A kit like this one contains gloves, absorbent powder, a biohazard waste bag, and a few more items. I’d add a few extras of the consumable items, like the nitrile gloves.

As an extra precaution, I’d also add a simple face mask. A simple vomit or bleeding event isn’t Ebola, but you may remember that that particular virus could be transmitted through any body opening, including nostrils and eyes, which is why Ebola health care workers wore goggles along with their face masks. Face masks are inexpensive and multi-purpose, so adding one or two to your clean-up kit is a simple matter.

At home, these same items will come in handy and not just for biological messes, which is a plus. (If you’re going to buy supplies and gear for any emergency, it’s a very good thing when they can be used for all kinds of emergencies.)

It’s vital that you isolate any potentially contaminated material as quickly as possible. That could mean keeping everyone out of the sick room or barricading a room until you can clean and sanitize the area. Also, be sure to very gentle soak up the blood, vomit, or other mess. Scrubbing at this point will just push the material deeper into the carpet, if that’s where the incident happened.

One of the easiest strategies for the actual clean up is to absorb the mess with paper towels, even if you’ve sworn off paper towels forever. Keep a couple of rolls with your first aid supplies. It’s easy to grab handful after handful, if necessary, and if the particular biological mess contains a virus, easy to put everything in a trash bag, seal, and dispose. If you decide to burn the contaminated paper towels, it will be a quick and easy task.

I’ve been collecting old, white towels for things like this. I keep them in my laundry room and everyone in the family knows where they are. Whenever there’s some sort of emergency, like a flooded toilet or vomit, those are the towels we use. Since they’re already white, I can use bleach when I launder them in the hottest water possible without fear of them being ruined. It’s also no problem if I just trash or burn the contaminated towels.

Using some sort of absorbent material to clean up the mess is a vital first step. You don’t want a pool of blood or other liquid at the bottom of a plastic bag, so make sure everything is first absorbed by paper or cloth towels and then dispose of those in a heavy-duty trash bag. Personally, I like the idea of having trash bags that let everyone around me know that it contains something that could be a health hazard. A box of 50 bright red biohazard bags is less than $12, and I hope to never have to use them all!

Before you just toss that bag, spray down the outside with an antiseptic spray or water/bleach solution, just in case the bag itself was accidentally contaminated. At this point the question is, what to do with the bag now? In an ordinary case of kid vomit or cleaning up after a typical injury with a bit of blood, it’s safe to throw out anything you’ve used in the cleanup. However, in a public health emergency, it will be a different story.

Finish up with your clean up by wiping the area clean one last time with a disinfectant spray like this one. When this is nearly, or completely, dry, spritz it well with a good dose of Stain & Odor Remover. I’ve used this product for years and swear by it.

Most likely a government public health agency will advise you on the disposal of anything that might be contaminated and contagious. In a real emergency, it would be okay to just store the trash bags in an out-of-the-way location until they can be properly disposed of. Be sure to keep them away from the sun, but putting them in a trash can out in the garage or on the patio would be okay. Those plastic bags could rip or be punctured, so if you end up storing them in a safe place temporarily, they should be in either a heavy duty cardboard box, a plastic bin, or something similar.

If the scenario is one of those “end of the world” situations, then burning or burying the waste will be best. That burial pit should be at least 3 feet deep and several feet away from any source of ground water.

Tools of the trade

Here are a few other items to have on hand to clean up biological messes:

In the typical household, these items will probably be used on occasion and not returned to their proper place, leaving you to scramble when it’s time to clean up a big mess. I recommend putting these supplies in a small plastic bin with a lid and then labeling it, “Emergencies Only”. When there really is an emergency, running around and yelling at the kids is not the way to go! 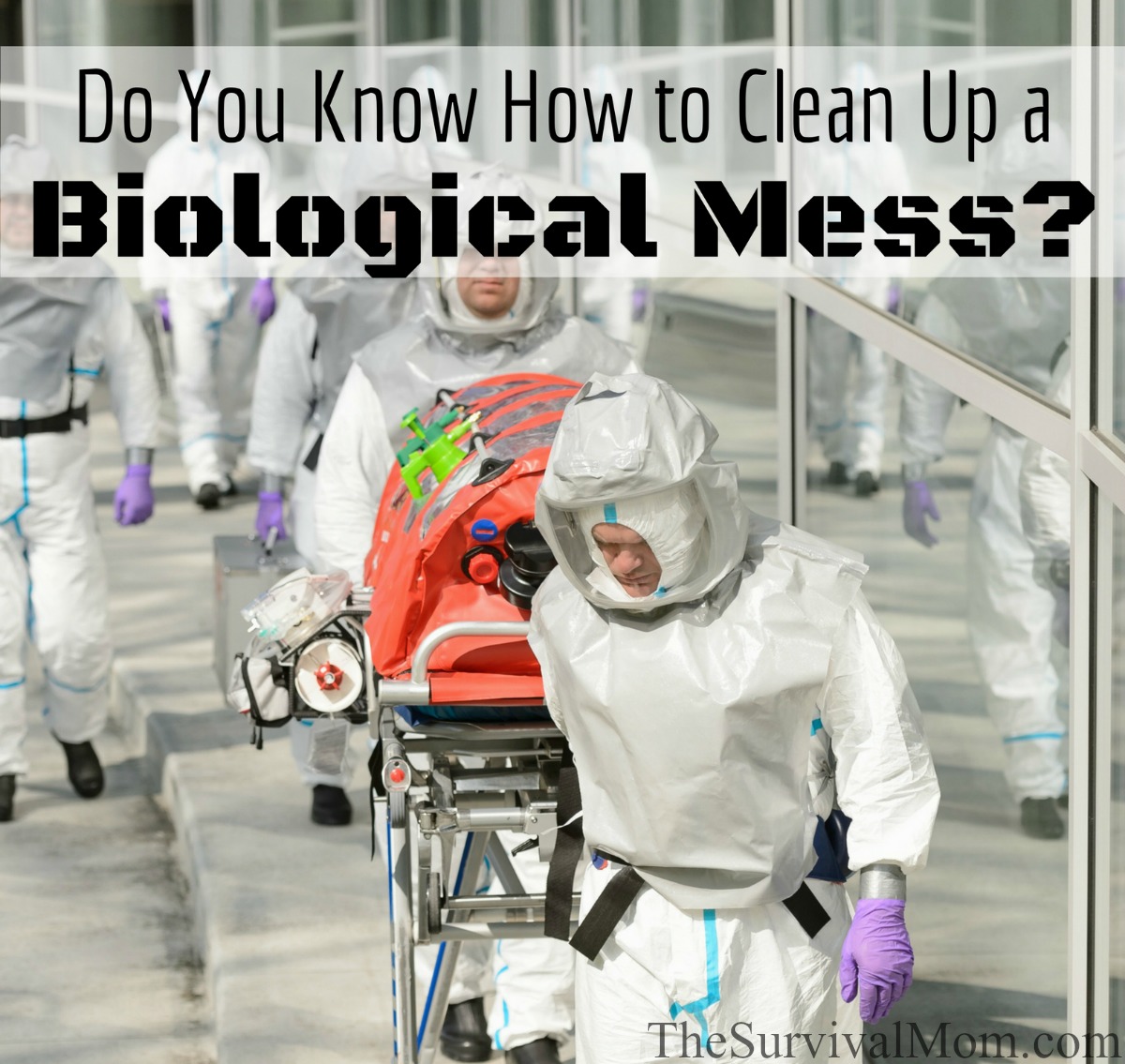