Skip to content
110shares
Some of the links in this post may contain affiliate links for your convenience. As an Amazon associate I earn from qualifying purchases. 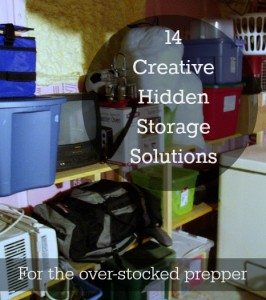 While I’ll never stop believing that skills trump stuff when it comes to prepping, there is no way around the fact that prepping also requires at least some degree of storage space.  Few people really want to live in a home that would qualify to be on the cover of Hoarding Weekly, right?  But, it is a sad fact that we often run out of storage space well before we’ve socked away all the supplies we’d like to have on hand. That’s where hidden storage comes in handy.

That’s when you need to get creative!

A large plastic tote can contain quite a bit of canned goods and other supplies.  Cover it with a nice tablecloth or throw blanket and it turns into a footrest or coffee table in the living room.  If you have a need for hiding cash or documents, slip it behind framed photos or certificates.  I doubt many burglars are looking to nab pictures from your trip to Disneyland or your kid’s kindergarten graduation certificate.

Most of us have some sort of bulk storage in our homes already.  Often, this is in the basement or the attic.  Even apartment dwellers are usually given some space for storing boxes of clothing and such.  Pack a few boxes with your emergency supplies, then label the boxes as “Grandpa’s suits” or something similar.  You might even go so far as to pack a bit of old clothing at the top of the box, in case someone gets nosy.  If you want to get really sneaky, mark each of those “special” boxes using a certain color or put a small smiley face on a corner of the box.  This way, it will be easy enough to find your supplies should you need to do so in a hurry.

Another possibility is to hide a few things in the air vents that run through the basement ceiling.  Remove one of the air vents on the side of the duct and place your goodies inside.  Be careful, though, that you don’t add so much stuff that you inhibit air flow.  While you’re in the basement, you may also see one or two long runs of large diameter PVC pipe.  Casual observers probably won’t notice one more run of the same size pipe.  Affix screw on caps to both ends and use it to store canned goods and such, then hang it from the joists using the same or similar hardware as is used on the other pipes already there.

Storing items under beds is always a possibility, though I doubt it could be considered all that “hidden.”  For this purpose, avoid the plastic tray type boxes that have small wheels on them.  They work well for light items like shoes but if you start adding in canned goods and other heavier objects, they might not hold up very well over time.A location few people ever think to observe is right above the door inside a closet.  Often, this is just empty space.  Consider installing a shelf there.  While it won’t afford you a ton of space, every little bit helps.Closets are another place you could use the mislabeled boxes we talked about earlier.  Who is really going to want to snoop in a box labeled Mom’s old love letters?

If you are somewhat handy with tools, you could add one or two baseboard heat vents to a room.  Take a picture of one of your existing heat vents and head to your local home improvement store.  Purchase a new vent cover that looks the same as the ones at home.  Cut a hole in the wall, making sure the vent cover will fit over it first, stash your supplies inside, then attach the cover to the wall. You can do the same with an electrical outlet cover. It would take a thief an awfully long time to double check that every outlet in the house isn’t concealing a small hiding place.

Another suggestion is to create your own customized hiding places when you’re doing any remodeling. A false wall can be installed inside a closet, for example, or you can create excellent hiding places beneath staircases. Built in bookcases can conceal large areas for storage, and even an entire secret room can be built given enough planning, and likely, a bit of extra cash.Now, some of these storage solutions aren’t meant for supplies that need to be rotated frequently or that are subject to temperature changes.  Be careful and make sure the storage solution will be a good match for what is going to be stored in that location. As well, document what you’ve hidden and where. You would hate to sell your house, only to remember later that you had stashed money or other valuables in places long forgotten.