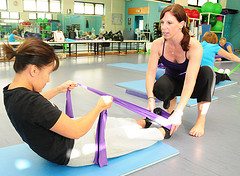 Many of you read TheSurvivalMom blog may be familiar with the program on National Geographic, called “Doomsday Preppers”. This show is an examination of the lives of real “preppers” who are all trying to get their preparations in order before the inevitable apocalypse.

The show has survival experts that rate the preparations of the featured survivalists and then they are rated based on their particular preparedness level. If you have ever watched this program, you will surely know that the majority of these “preppers” as they are called, are physically out of shape and not physically in any condition to tackle something as grandiose as surviving doomsday.

How do these people expect to survive some sort of apocalyptic doomsday scenario when they look like they are one doughnut away from a quadruple bypass?

While some of them may have extensive preparations, they often overlook the very real importance of being in peak physical condition. If the apocalypse really were to occur and these severely out of shape people were actually forced to leave their homes, how could they really expect to, “head for the hills”?

Could these out of shape doomsday preppers really hack it if they needed to march miles into the wilderness and live off the land? 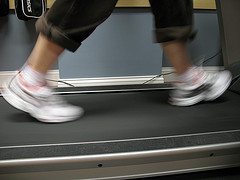 image by Mr. T in DC

If you were really forced to abandon your home because of some disaster of apocalyptic proportions, the reality is you will be essentially reduced to the role of a refugee. Your days would be consumed by your constant wandering, searching for supplies, resources and whatever food you could be lucky enough to come across. To survive in these conditions the reality is that you will be forced to hunt and gather your food which requires you to be physically fit.

How could you be severely out of shape and expect to sow crops, defend yourself from external threats and perform the intensely physical tasks that are required for survival, like chopping firewood or walking extremely long distances.

Most of the people on “Doomsday Preppers” would surprise me if they could jog a full mile, so hiking out into the wilderness to sustain themselves off the land appears to be a long shot for these portly survivalists. If you were seriously concerned about “doomsday prepping,” wouldn’t you naturally consider your own physical fitness to be the pinnacle of your preparations? At the end of the day, the only gear you always have with you is your mind and your body, so it is the most important gear in your survival preparations.

While many survivalists are obsessed with building a home fortress, it would benefit them to be spending some of that time and effort on preparing their bodies as much as they have prepared their home defenses.

After all, you cannot only be prepared to be fortified in your home.  You will surely be forced to head out in search of supplies no matter how well stocked your preparations are.

Making a daily workout routine part of your preparations should be a top priority of people who are preparing for doomsday. The reality is that your physical body is your best defense and if you are in abysmal physical shape, then how do you expect to survive the harsh conditions after the apocalypse?

I think that most of these “doomsday preppers” (and all survivalists for that matter) would benefit by spending a little more time running on a treadmill and lifting weights. That combined with constantly honing survival skills and reading sites like TheSurvivalMom will go a long way in terms of increasing their chances of survival.

You can read more from Judah at his site, Post Apocalyptic Survival, including this article, “How to Survive the Apocalypse on a Budget”.